Wolves were long considered vicious pests that preyed on livestock and popular big game animals across the U.S. West. By the mid-20th century, they had been hunted and trapped to near extinction, even in the protected confines of Yellowstone National Park. But the loss of wolves led quickly to a series of undesirable outcomes, from an exploding coyote population to the degradation of wild landscapes. The 1995 reintroduction of wolves to Yellowstone produced a nearly immediate revival of animal and plant life in the park as well as an unexpected restoration of its once pristine waterways.

A naturalist for the U.S. Park Service, Rick McIntyre transferred to Yellowstone Park to be on hand for the reintroduction of the gray wolf there in 1995. That year, 14 of the apex predators were captured in Western Canada for transfer to Yellowstone’s remote Lamar Valley. As McIntyre recalls, he expected the newcomers to be hard to find in their new surroundings, even by experts like himself.

He was therefore amazed to sight a pack of six wolves the very first morning he looked, and was able that day to point them out to delighted park visitors.

The animal had been eliminated from the park in 1926 in a misguided, decade-long program to protect big game animals. It was a historic wrong that, nearly 70 years later, was at last being set right.

The clear and immediate presence of Yellowstone’s new wolves that first day anticipated the rapid effect they would have on the surrounding ecosystem in the seasons to come. It also underlined the sudden and drastic decay the park’s landscape suffered when they were removed decades before. The story of the wolf in Yellowstone is one of dire unexpected consequences, and astonishing revivals, that vividly demonstrate how deeply interconnected life on Earth is.

When Yellowstone Park was founded in 1876, “America’s wonderland” was set aside for its unique geological formations and as a source of big game. It was expected that moose, elk, deer, and pronghorn sheep would migrate outside its boundaries for the benefit of hunters.

These trophy animals were eventually protected in the park by law, but their predators – grizzly bears, mountain lions, and especially wolves – were considered pests. These animals were fair game outside the park, hunted to near extinction in defense of local ranch livestock. Though bears and lions were protected inside Yellowstone, the gray wolf was not so lucky. As unbelievable as it now seems, Yellowstone rangers began a successful campaign in 1915 to wipe out every wolf in the park.

The name gray wolf is something of a misnomer. Canis lupus can vary in color from jet black to, in the arctic, pure white. The dark gray coats of most wolves gradually lighten as the animals age.

The grim consequences of that slaughter were obvious almost immediately. Studies in 1928 and 1933 reported the degradation to willows, cottonwoods, and aspens as an exploding elk population devoured the shoots of young trees. Riverbanks, now un-shaded and unreinforced by root systems, collapsed, silting up Yellowstone’s waterways. By the 1930s, park staff killed hundreds of elk every year, a program that lasted into the 1960s, to stave off an ecological disaster. While culling the elk herd stopped further environmental degradation, it was not enough to allow the abused landscape to revive.

By the mid-1940s, naturalists, realizing their error, called for the restoration of wolves to the park. Yet a fierce prejudice against the animal remained among neighboring ranchers. And local governments and businesses, invested in the steady income that abundant elk and deer hunting outside Yellowstone brought to their bottom lines, also resisted.

In the decades following the widespread eradication of the gray wolf, coyotes, whose western population was once kept in check by their natural wolf enemies, gradually expanded their territory eastward. They’re now established in every major U.S. urban center where they eat refuse, prey upon rodents, and, all too often, family pets.

The Endangered Species Act of 1973 finally gave a legal framework for the protection of wolves, but their Yellowstone return took another quarter century. After years of studies and proposals, and over local objections, 14 wolves were captured in Alberta, Canada in 1995 for transportation to Yellowstone. These animals were chosen for their familiarity with the same large prey – elk and bison – found in the park. This first group was supplemented with 17 Canadian wolves released in Yellowstone in 1996, and another ten were added a year later.

Crucial to reintroduction was the fact that the Canadian wolves had never learned to attack livestock, which highlights a remarkable feature of lupine behavior. Wolf pups must be taught to hunt by the rest of the pack, an education that can take nearly two years.

A wolf pack typically numbers about eight individuals, with just one alpha breeding pair. Others in the pack help to raise their offspring. Only 20 percent of pups reach adulthood, victims of disease and other predators. And wolf lives are hard and short, lasting on average five to six years.

This ability to learn, with a corresponding openness to new experiences and affinity for cooperative behavior, explains the animal’s presence at the top of the food chain, where it is classified as an apex predator and keystone species central to a healthy ecosystem. It may also be the reason why a few wolves, ancestors of modern dogs, decided to become hunting partners for humans an estimated 30,000 years ago.

The Wolf Revival’s Many Surprises

Yellowstone’s first 41 wolves formed a total of five packs that mainly ranged in the northern half of the park, offering a rich opportunity for naturalists to study the animal’s behavior in the wild. All of that first generation were released with radio collars that allowed long-distance tracking. A dedicated staff of park rangers and volunteers undertook a daily, year-round survey of their behavior that identified individuals and followed their progress as they hunted, roamed new territory, and reproduced. 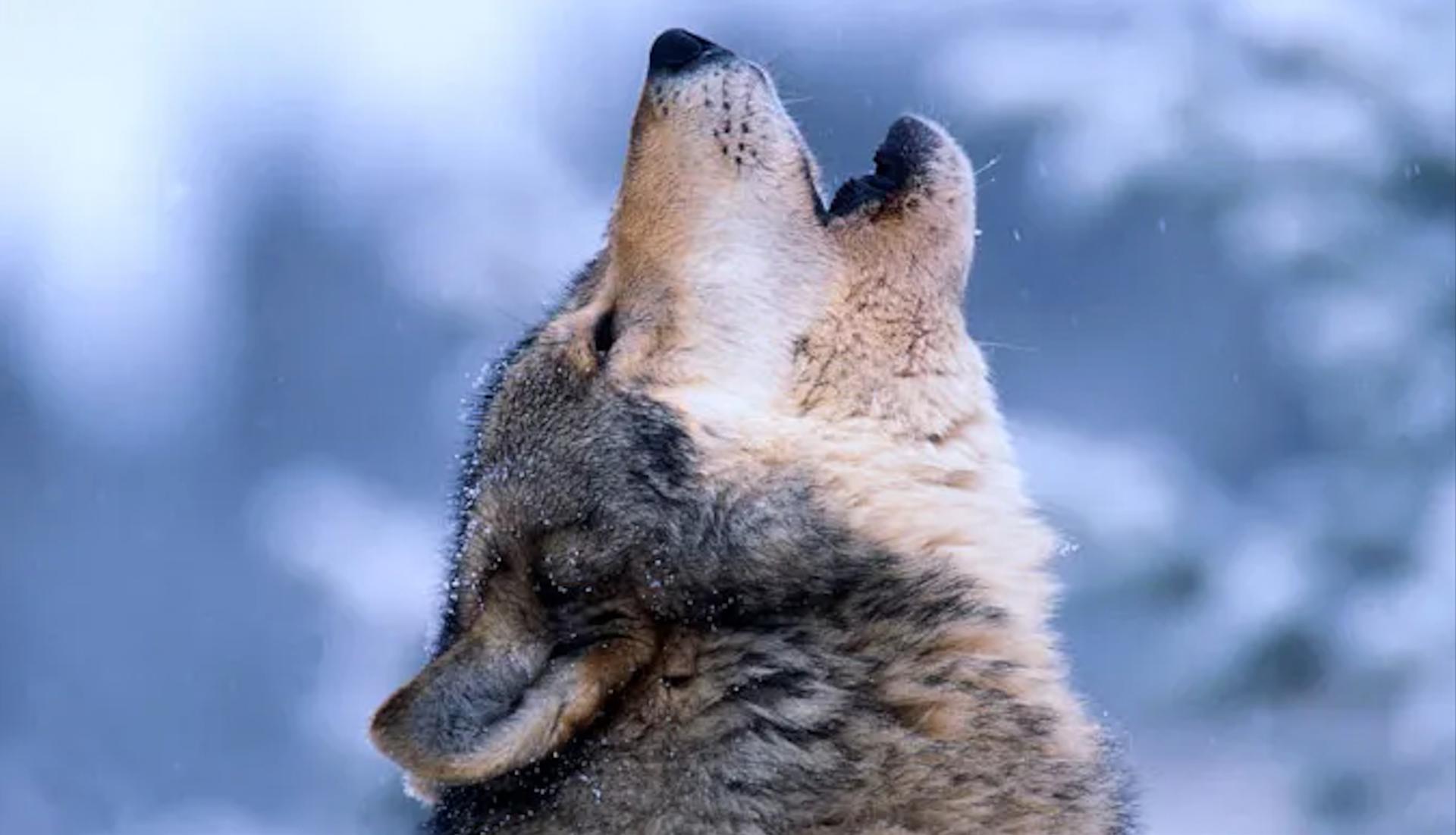 While most of this behavior was familiar, Yellowstone wolf watchers were surprised by incidents that exhibited the playful nature of these supposedly fierce animals. Apparently wolves have fun with pups, other adults, and, in one remarkable documented instance, with a grizzly bear sow and her cub.

Observers also witnessed occasions of hunting cooperation with coyotes in taking a large elk, and an astonishing social affinity with ravens. It is now suspected that ravens can act as airborne scouts for wolf packs so as to feed on the remains of any kill once the predators are done with it.

This amazing interspecies behavior shows the vast interdependence inherent in the natural world that the reappearance of Yellowstone’s wolves made clear almost immediately.

The wolves took, as expected, about 17 elk per wolf each year. But beyond pure numbers, elk behavior changed dramatically once a natural predator was present. Elk spent more time watching for danger and less time grazing. They also avoided open areas, like river valleys, in favor of steeper and forested terrain that allows them greater defense from attack.

In nine years, Yellowstone’s elk population decreased by almost half while the number of wolves peaked, in 2004, at 171 animals running in 16 packs. Along with predation loss, the elk also had fewer births, likely reflecting higher stress levels and a reduction in overall grazing supply.

A Cascade of Positive Effects

Within two years of the wolves’ reintroduction, Yellowstone biologists noted the revival of young trees along rivers. The new growth stabilized the banks, causing a gradual deepening of water channels, which benefitted trout populations. More trees meant more beavers, another mammal species that staged a remarkable comeback in the park. The beavers built more dams, and their ponds enriched water plant life, which benefited a range of wildlife from moose to otters and mink.

More bird droppings enriched the soil and spread plant seeds further around the valleys now free from elk grazing, a boon to the bison population. While bison, almost half again as large as elk, are better suited to defend against wolf predation, their herds were tested as well. Wolves have been observed singling out individuals they sense, because of age or illness, cannot depend for long on group protection. This natural selection has been found to improve overall herd health in bison and elk populations.

Wolves also benefited other top predators. Bears will steal elk and deer carcasses from the wolf packs who first made the kill, with mountain lions also appropriating wolf leftovers. Raptors and corvids then descend to finish off the remains of wolf kills. Finally, bacteria claim any organic remains as the minerals in bones and antlers return to the soil.

This cause-and-effect process is called a trophic cascade, a term describing the many-leveled adjustments that occur when a keystone species enters, or is removed from, its immediate biosphere. Though long-understood as a concept, biologists observing the Yellowstone wolves’ revival were unprepared for the speed and extent of the environmental rebound.

After a quarter century, the report card for wolf reintroduction shows nearly straight A’s. The most recent figures for Yellowstone’s wolf population count 94 animals in eight packs. More importantly, the elk herd is at a sustainable 8,000 head. Yellowstone’s coyote population has been reduced nearly 40 percent.

One feature of wolf predation that surprised observers was seeing how they targeted elk bulls in hard winters, zeroing in on larger and weaker individuals, while attacking smaller cows that were easier to take down when conditions were more favorable to the prey.

Wolf-watching has become a central pursuit for many Yellowstone visitors. On a dollar basis, though the overall cost of wolf management is in the range of $30 million so far, returns from visitors on wolf-watching expeditions, – for entrance fees, lodging, food, and guiding services – have been an estimated $35 million.

These successful numbers underline the fact that Yellowstone Park is a vast and beautiful natural laboratory where environmental best practices can be instituted and studied. Thanks to their overall success in Yellowstone, wolves have migrated outward and established enough numbers in surrounding states to have been removed from the Endangered Species list in 2009.

Still, the overall ecological benefits of wolves do not impress ranchers coping with cattle and sheep losses. Montana and Idaho have instituted a license and quota system for hunting wolves in season. Wyoming allows anyone at any time to shoot wolves on sight, effectively reducing them once more to the status of pests.

Finding a balance is hard, and no one expects the renewed presence of wolves in their old hunting grounds to be an easy fit with human activity. But their eradication caused great environmental dislocation, and Yellowstone’s example shows that the wolf’s reappearance may well benefit our greater world in unsuspected ways.

The movements of tectonic plates hundreds of millions of years ago created the geography of Earth as we know it today. The landforms left behind by shifting land and glacial paths…