Takaya the Sea Wolf: A Story of Evolution and Climate Change

Takaya, a rare coastal carnivore known as a sea wolf, lived an isolated existence on a smattering of islands off the coast of British Columbia. During Takaya’s life, he fascinated the public, and many fell in love with the solitary creature. His story also sparked fierce debates and deep discussions about Indigenous approaches to nature, climate change, the future of evolution, and the innermost desires of human beings.

When Doug Paton walked out of the trailer he was staying in one night, the last thing he expected to see was a wolf. But that is exactly what he encountered: a large, lone Canis lupus, staring at him with bright eyes.

“Just like a person, you might not remember a name, but you never forget a face,” said Paton, a lifelong British Columbia resident. “I’ll never forget that face as long as I live. I just close my eyes and see it.” 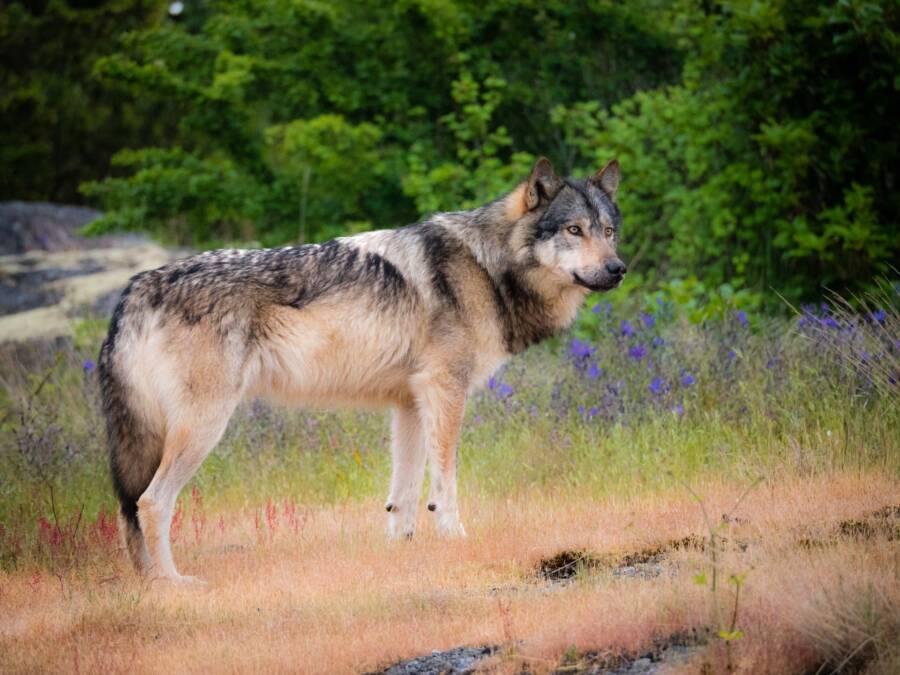 The wolf looked at Paton, then trotted away, giving him a long stare on the way out. From there, the animal journeyed through the wilds of British Columbia before arriving at the shore. He then embarked on a two-mile swim and landed at a remote cluster of nearby islands, where he would live for 11 years in complete isolation – except for the many humans who would observe, love, and ultimately kill him.

Takaya, as he became known, was a coastal island wolf – though many colloquially refer to these rare animals as “sea wolves.” British Columbia’s misty coasts are home to rocky terrain, balsam pines, sea otters, elk, and bison, but they are also stalked by wolves who do not behave at all like ordinary wolves.

The Rise of the Sea Wolf: A Brief Evolutionary History

Most North American wolves live on moose, deer, and other red meat, yet sea wolves often go their whole lives without ever sinking their fangs into a deer. Instead, they haunt beaches for crustaceans and seals, swim after salmon, and seek out and munch on washed-up whales. Powerful swimmers, they can clear miles of ocean effortlessly, whereas some inland wolves can hardly swim in the ocean at all.

Sea wolves are genetically different from their inland relatives, though of course, they all stem from the same ancestors. The earliest wolves evolved from ancient carnivores known as the Miacidae, a group of creatures that, like most mammals, evolved from insectivores that lived among dinosaurs during the Cretaceous period. These animals most likely originated in today’s Asia, where they branched into three separate species of wolves: the muscular dire wolf, the grey wolf, and the coyote.

The dire wolf failed to survive the Ice Age, but the scrappier grey wolves and coyotes were better suited for freezing temperatures. Some 700,000 years ago, scientists believe, some of the surviving wolves crossed the Bering land bridge and arrived in North America. Eventually, over two million wolves roamed the continent.

At some point, like many animals living in remote locations, a small population of wolves living on the coastlines of Canada began to change on a cellular level, evolving away from their grey wolf forefathers. They developed talents for swimming and fishing, and eventually became the modern sea wolf. Today, these creatures are generally much smaller than their grey wolf counterparts.

Someday, the wolves may evolve into something else entirely. “If we fast forward another 50 million years from now, there might be a new creature of the ocean, a new marine mammal that branched off from these coastal wolves that are heading that way anyway,” says photographer Fréderic Févre in the MagellanTV documentary The Wolf: Marine Mammal. Févre speculates that the sea wolf is on its way to becoming an entirely aquatic creature, returning to the seas from which its oldest ancestors came.

The Public Falls In Love With Takaya, the Solitary Sea Wolf

Even for a sea wolf, Takaya was unusual. The wolf was an “extreme data point” for researchers, according to wolf expert Chris Daimont, in part because of his unique habits.

“There is something about being in the presence of a coastal wolf,” said documentarian Bertie Gregory. “They just have this magic and aura around them.”

A few people spotted the wandering fellow that day on his long quest from Paton’s house out to the coastal islands, and legends about him began to spread. Soon enough, wildlife photographers and tourists were rowing out to the islands to catch a glimpse of the solitary beachcomber. 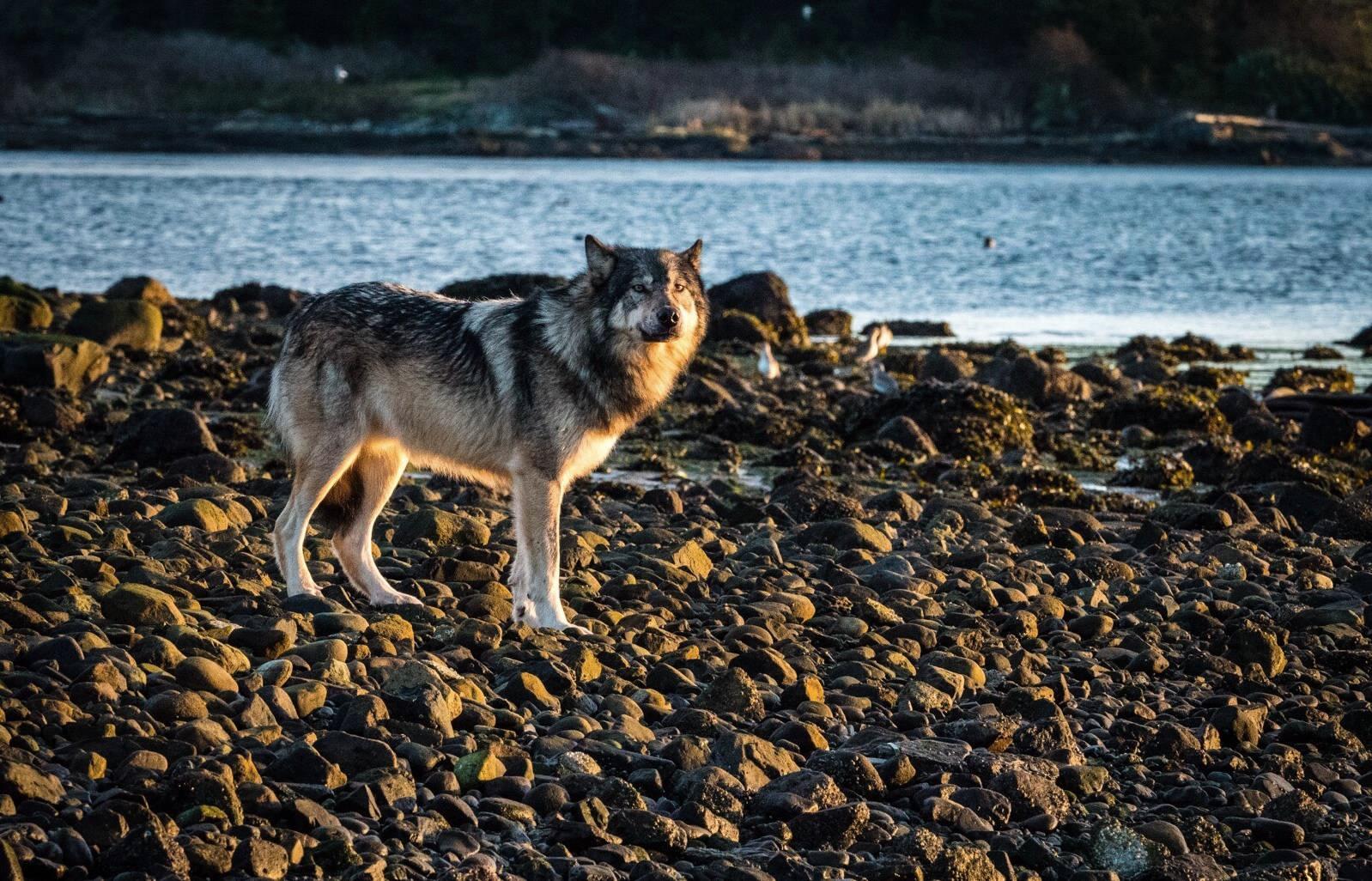 Scientists were interested in his habits, but many of his fans related to his isolation. “There was something about his aloneness...his alienation from his own kind...that spoke to people’s own feelings of alienation and aloneness in the world,” said writer Cheryl Alexander, who spent six years photographing and writing about Takaya. “Plus, we’re all hopeless romantics.”

Doug Paton found comfort in the wolf, too. When Takaya showed up at his door, he had been living in a trailer on his sister’s farm, enmeshed in a lengthy custody battle and divorce.

“I didn’t want to fight any more. And then I saw this lone wolf and thought, ‘If he’s healthy – if he’s doing fine by himself, then so can I,’” he said. “From that day forward, I just changed my attitude towards things. I stopped feeling sorry for myself. I felt more invigorated than ever to get things right in my life. And I never looked back.”

A Legacy of Culture and Conflict

Thanks to his popularity, which was compounded by press accounts and a lot of word-of-mouth legends about the mysterious island wolf, Takaya also generated a great deal of controversy. By no fault of his own, he reopened some ancient wounds in the human world.

From the time they arrived in the Americas, early humans seem to have coexisted with wolves. Indigenous folklore and mythology is studded with references to wolves, and, in most stories, wolves were respected and considered sacred and powerful. Many Native American cultures viewed wolves as teachers from whom they could learn valuable lessons about hunting, family, and the interconnectedness of life. 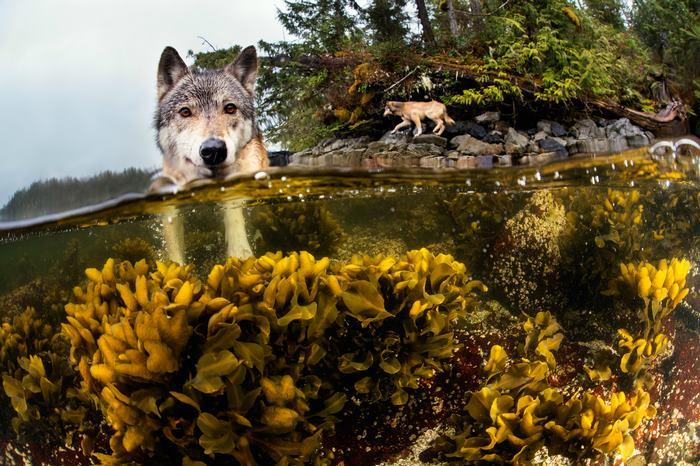 A sea wolf on the Pacific Coast. (Image Credit: Ian McAllister via boredpanda.com)

But European colonizers generally didn’t share the sentiment. Seeing wolves as predators that challenged their ability to control nature, they sought over time to annihilate the grey wolf population – and, as with bison, they nearly succeeded.

Conservation efforts in the 1970s pulled North American wolves back from the brink of extinction. Hunting laws and rewilding efforts allowed the coastal sea wolf population (along with the population of mainland grey wolves) to re-emerge from almost nothing. But today, hunting is sanctioned on the islands, and once again, the wolves’ existence is threatened by human activity.

Takaya wasn’t exempt from the threat. Tourists’ increasingly frequent journeys to Takaya’s islands led to a few tense encounters. Park officials worried that there would be a violent altercation between the wolf and his visitors, so they set up traps in an effort to capture and relocate him.

But the Songhees, the Indigenous tribe to whom the islands belong, were excited about the wolf’s return to their land and vehemently resistant to efforts to trap him. The conflict became symbolic of the deep, unresolved conflicts and fundamental differences between British Columbia’s Indigenous peoples and settlers.

This was a sensitive issue for many reasons. Back in the 1800s, when First Nations traditions had been banned, the Songhees had used one of Takaya’s islands as a place to conduct their rituals in secret. Now that the island was a reservation, they didn’t want more imposition; they wanted their land back, wolves and all. For a time, Takaya stayed.

But wolves such as Takaya face many threats, and not only from rogue hunters. The coastal regions of British Columbia are threatened by systemic issues like deforestation, logging, pipelines, and above all, climate change.

How Will Life Respond to Climate Change and Environmental Devastation?

Temperatures and sea levels in British Columbia are increasing, and this is already altering life – wolf and human – as we know it. Inevitably, creatures evolve to suit the times, and the amount of climate change that does happen will shape the future of life on the planet. In the case of a climate catastrophe, life forms able to adapt to wildfires, floods, and storms will likely survive.

Perhaps sea wolves, which evolved long ago to meet the demands of their surroundings, are better-suited to the effects of climate change than other wolves. And maybe changing temperatures could even expedite their transformation into wholly aquatic creatures. Most likely, though, sea wolves will not be among the creatures that survive today’s ecological catastrophes. It’s possible that humans won’t either.

But Earth will continue without humans and sea wolves. Over millions of years, on a time scale far vaster than we usually can image, the planet will adapt. While no one is certain what this future will look like, some scientists predict that rising temperatures may lead to huge spikes in lizard, bird, and insect populations.

Back to the Ocean: What Will Become of the Sea Wolf (and Life on Earth?)

Several months before he died, Takaya left the islands that had been his home for so long. Perhaps seeking a mate or some form of connection, he entered the ocean and swam to the mainland, where he spent two days wandering the parks and streets.

After a long chase, he was caught and drugged by the police, who relocated him to an inland forest nearly 100 miles from his island. A few months later, in March of 2020, Takaya roamed too close to a hunter’s pack of dogs and was shot and killed. His death sparked a global outcry. 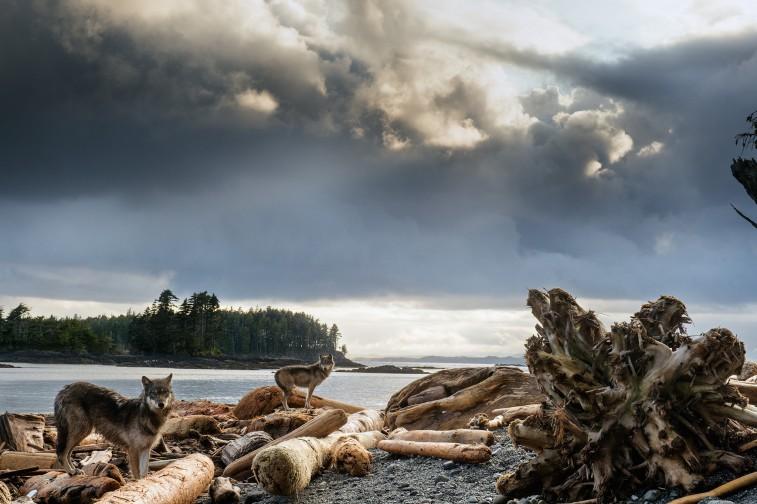 Though Takaya is gone, sea wolves still roam the shorelines of British Columbia. They are ghostly and elusive, yet their fates are entwined with ours.

What will become of the sea wolf and life on Earth? Change seems to be the only certainty. But one thing is for sure: There are moments of solace to be found in connection – sometimes with each other, and sometimes with the wolves that show up at our doors, perhaps just as curious, lost, lonely, and alive as we are.

Protected since 1975, grizzly bears have gradually returned to the U.S. West. Shy animals, they are fierce guardians of their cubs and food supplies if people blunder into their…