Men on the Moon: The Story of the Apollo Moon Landings

Fueled by its bitter rivalry with the Soviet Union, the United States invested enormous resources into the missions that sent the first people to the Moon. Have you ever wondered who had their childhood dreams come true by landing on the Moon? Find out how many people have made it up there and when we might head back.

In December of 1972, astronaut Eugene Cernan climbed onto the lunar landing module Challenger, leaving behind a footprint that has yet to be followed by any other. Almost 50 years have passed since the Apollo 17 crew splashed down in the Pacific Ocean, marking both the end of NASA’s Apollo program and a pause on all human travel to the Moon.

Twelve men can lay claim to having been moonwalkers, and an additional twelve can say they have been to the Moon and back. Only 10 of those 24 are still alive. Over the course of four and a half years, the Apollo program revolutionized our  relationship with the orb in the evening sky. Now, half a century since the last moonwalk, NASA’s Artemis program is set to make a triumphant return to the Moon in 2025. The elite club of 12 moonwalkers will likely expand as American, international, and commercial endeavors rekindle humankind’s exploration of space.

To learn more about the astronauts who have made it to the Moon, watch the MagellanTV original film Apollo’s New Moon: https://www.magellantv.com/video/apollos-new-moon-4k

The Cold War between the Soviet Union and the United States was in full swing when, in 1957, the U.S.S.R. launched the first artificial satellite Sputnik into orbit around Earth. A few years later, the Soviets were the first to send men into space, signifying a huge step for humanity’s prospects of space exploration. Not to be outdone in the Space Race, President John F. Kennedy announced his goal for the United States to send a man to the Moon before the end of the 1960s – and NASA delivered. Despite the tragedy of the botched Apollo 1 launch rehearsal, the Apollo program forged ahead to meet Kennedy’s deadline to safely send men to the Moon.

In a year of notable – and notorious – events, the landing of the first astronauts on the Moon was indelibly imprinted in the memory of millions. On July 20, 1969, the world watched as Apollo 11 broadcast footage of Neil Armstrong taking his “giant leap for mankind” on the lunar surface. Armstrong, Buzz Aldrin, and Michael Collins piloted the mission, bringing their spacecraft into orbit around the Moon three days after liftoff.

For every two people who walked on the Moon, a third astronaut remained piloting the Command Module. Michael Collins may have been ‘the loneliest man in history’ during the three hours he spent in orbit while his crewmates went on one of mankind’s most notable walks.

Armstrong and Aldrin transferred from the Command Module to the Landing Module (known as Eagle) to navigate down to the Moon’s dusty surface. Armstrong disembarked first, and Aldrin followed 20 minutes later. They collected samples, conducted experiments, took photographs, and meticulously recorded verbal and written accounts of the landscape. The data they collected would supply NASA scientists with years’ worth of research materials that would prove invaluable to understanding the Moon’s origin. 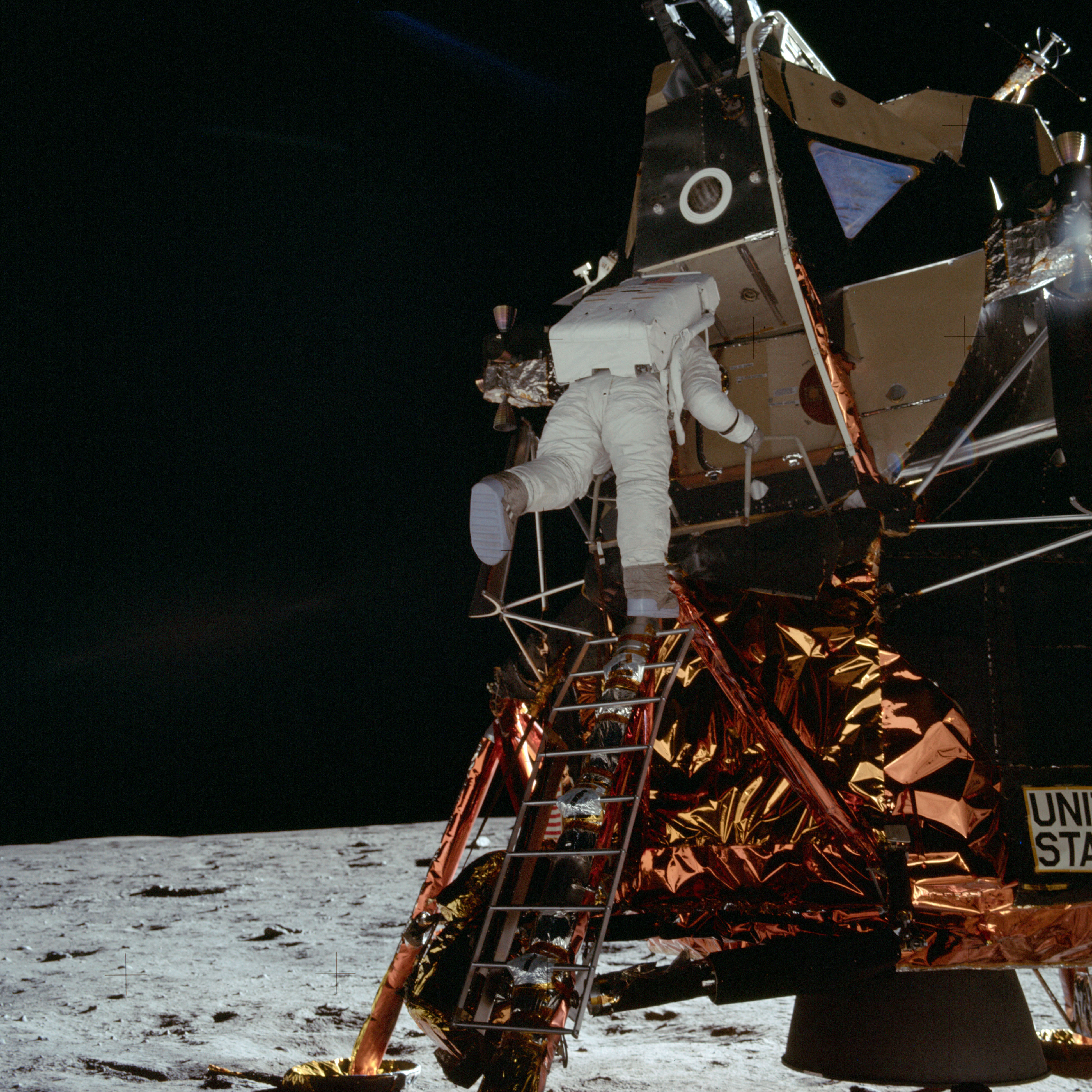 Buzz Aldrin, the second man on the Moon, descending from the lunar module.

Apollo 13 – The Mission Failure That Was a Success

After the successful Apollo 11 and 12 missions, Apollo 13 aimed for the “Fra Mauro” region of the Moon in April 1970. Approximately 56 hours into its voyage, one of its oxygen tanks exploded and caused the neighboring tank to fail. Quick-thinking astronauts James Lovell Jr., Fred Haise Jr., and Jack Swigert worked in constant communication with NASA engineers to modify their spacecraft for a safe return to Earth.

While they were unable to land on the Moon, the mission was deemed “a successful failure” by NASA. It demonstrated the inherent dangers of space exploration and showcased the massive team whose every move had immediate repercussions on the survival of the crew – not to mention that it raised thorny but crucial questions about the future of space travel.

NASA used the first trips to the Moon to create new technologies that would serve astronauts on later missions. Training and simulations on Earth attempted to prepare astronauts for the challenges of working on the Moon, but the inescapable realities of its fluctuating temperatures, dusty surface, and high radiation levels gave engineers new parameters to work within. Improvements in safety measures, the invention of the lunar rover, and food with a greater amount of moisture in it made each subsequent trip to the Moon more feasible than the last. By the launch of Apollo 17 in 1972, NASA had hit its stride in manned space travel, but budget cuts and dwindling public interest would ultimately force the agency to accept that all good things must come to an end. 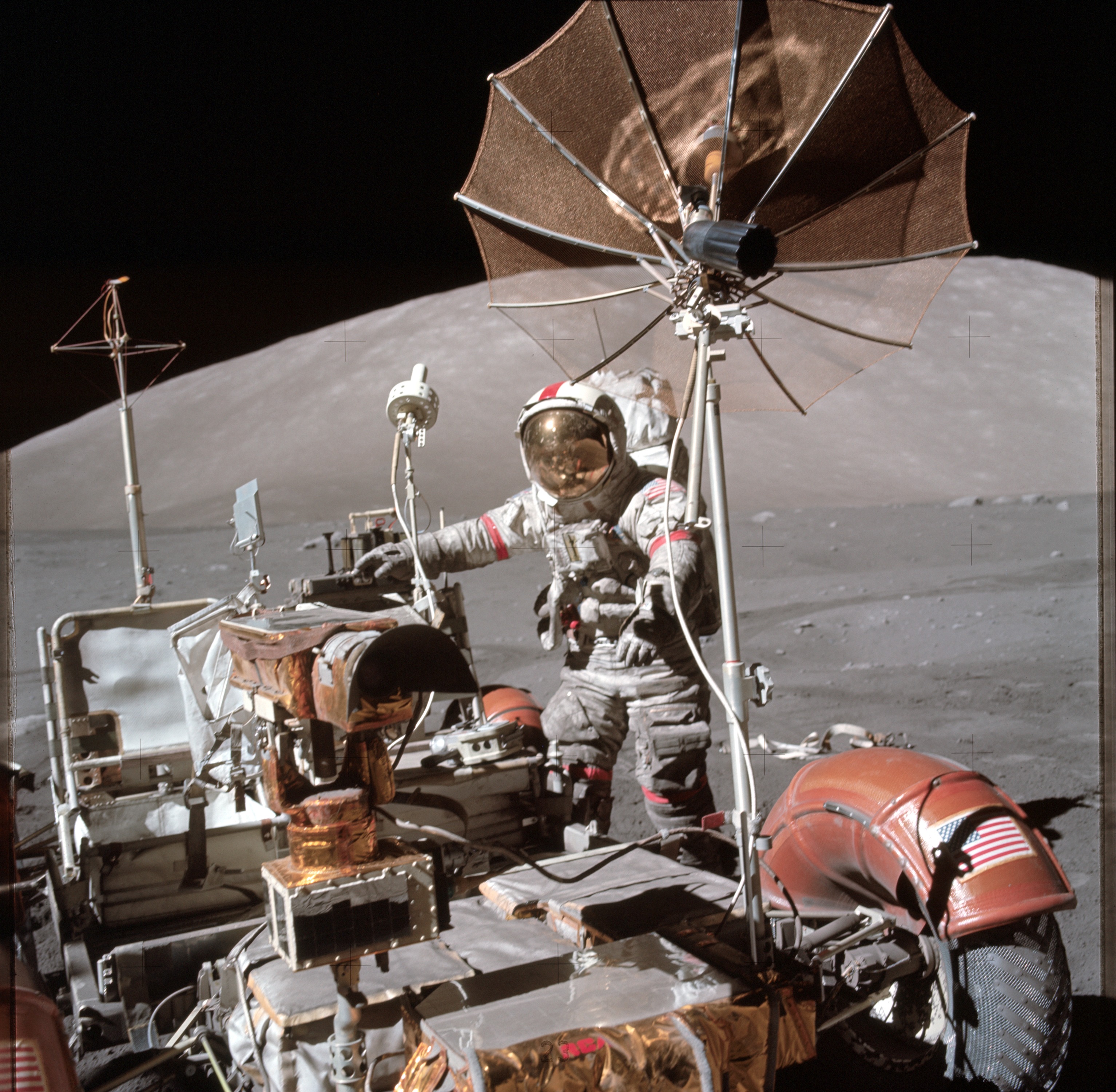 The Apollo 17 mission was the sixth and last to take men to the Moon, but it was also the first to bring someone other than a trained astronaut into space – geologist Harrison Schmitt, who described the Moon as “a good geologist’s paradise.” Apollo 17 set records for collecting the largest sample (by weight) of Moon rocks, the greatest distance traveled via lunar rover, and the longest Apollo flight time. And, its launch from the Kennedy Space Center against the backdrop of a starry night’s sky was arguably the most cinematographic of all the manned space missions. As the last manned mission to the Moon for a few generations, Apollo 17’s record-breaking journey was a tough act to follow. But that may soon change.

Who Has Walked on the Moon?

What Have We Learned About the Moon Since?

No human beings have walked on the Moon for half a century, but plenty of new scientific discoveries about the Moon have been made through robotic spacecraft. In 2009, NASA’s Lunar Reconnaissance Orbiter detected water trapped within rocks and ice on the Moon. This revolutionary discovery has changed the way we look at Earth’s natural satellite, offering insight into the Moon’s chemical history and sparking discussion of its potential as a platform for supporting human activity. There are still questions about the presence of radioactive material and the timeline of volcanic activity on the Moon, but the data collection of the last half century have given scientists a clearer picture of our closest neighboring celestial body.

The Apollo program was named after the ancient Greco-Roman god of the Sun, whose image riding a chariot across the solar orb seemed to parallel men flying in a spaceship. The Artemis program is named after Apollo’s twin, the Greek goddess of the Moon.

Moving Forward with the Artemis Program

Following a 50-year hiatus of manned lunar exploration, NASA’s Artemis program has assembled the next generation of astronauts, engineers, and scientists to send people back to the Moon in 2025. Using the successes and failures of the Apollo program as a blueprint, the Artemis shuttles will approach the Moon with more points of inquiry than ever before. For now the Moon looms over us, just out of reach – but, if all goes to plan, not for too much longer.

Daisy Dow is a contributing writer for MagellanTV. She also writes for Local Life magazine. She recently graduated from Kenyon College with a degree in philosophy and studio art.

Thanks, NASA! 3 Innovations We’ve Learned We Can’t Live Without

Can you imagine a world without GPS, handheld electronics, and services like online banking and online dating? Our current tech-heavy world is heavily dependent on these advances…

Working on the Moon was no walk in the park for the Apollo astronauts. From bulky space suits to toxic space dust, the challenges were many. But the astronauts overcame the…

Apollo’s New Moon writer/director David Sky Brody discusses aspects of this MagellanTV original film, and the importance of the Apollo missions in revolutionizing knowledge about…