Early European encounters with the North American brown bear gave it the vernacular name Grizzly, and the Latin species designation Ursus arctos horribilis. Fundamentally shy animals, they are fierce guardians of their cubs and food supplies when humans blunder into bear country. Named a protected species in 1975, the number of wild grizzlies has gradually increased. As their range slowly expands across a populated American West, can grizzlies and humans find a way to live as neighbors?

The campground behind the post office in Ovando, Montana, seemed safe. The town, population 75, is a handful of buildings on three streets right off a state highway, at the western base of Montana’s Rocky Mountains.

The bicyclists touring from California who camped there the night of July 6, 2021, might’ve thought the bear they shooed away from their tents around 3 a.m. was one more colorful part of Montana village life. They then stowed their food away from their bedrolls – Rule One when sleeping outdoors in bear country – and went back to sleep.

About an hour later, the 400-pound grizzly returned, this time slashing through the tent of Leah Lokan in its search for food. Though the 65-year-old nurse’s companions heard her screams and doused the animal with a heavy dose of pepper spray causing it to flee, Lokan, raked by the grizzly’s claws, soon died of her massive injuries.

In retrospect, the campers made two errors that night. Lokan is reported to have kept some berries, along with a granola bar, in her tent. That was enough to attract the bear’s acutely sensitive sense of smell. Worse, they overlooked Rule Two for grizzly country: If a bear visits your campground before running away – leave immediately. Come back later for your stuff, because it’s highly likely the bear will return.

Two nights later, Lokan’s killer was shot dead by Montana wildlife officials as it raided a nearby chicken coop. It was a sad end to a tragedy, one both unexpected and easily avoided.

Before diving further into the subject of grizzly bear attacks, let’s note how uncommon they are. Every year many more Americans are killed by lightning or – as pointed out by Montana author Scott McMillion in his authoritative book Mark of the Grizzly – vicious dogs.

It should also be noted that relatively few grizzly attacks result in death. Though they are responsible for horrific, life-altering injuries, in most cases attacking bears are looking to neutralize a threat or subdue a rival for food. Attacks last from ten to 30 seconds. A 400-pound grizzly, if it wanted, could kill you instantly. 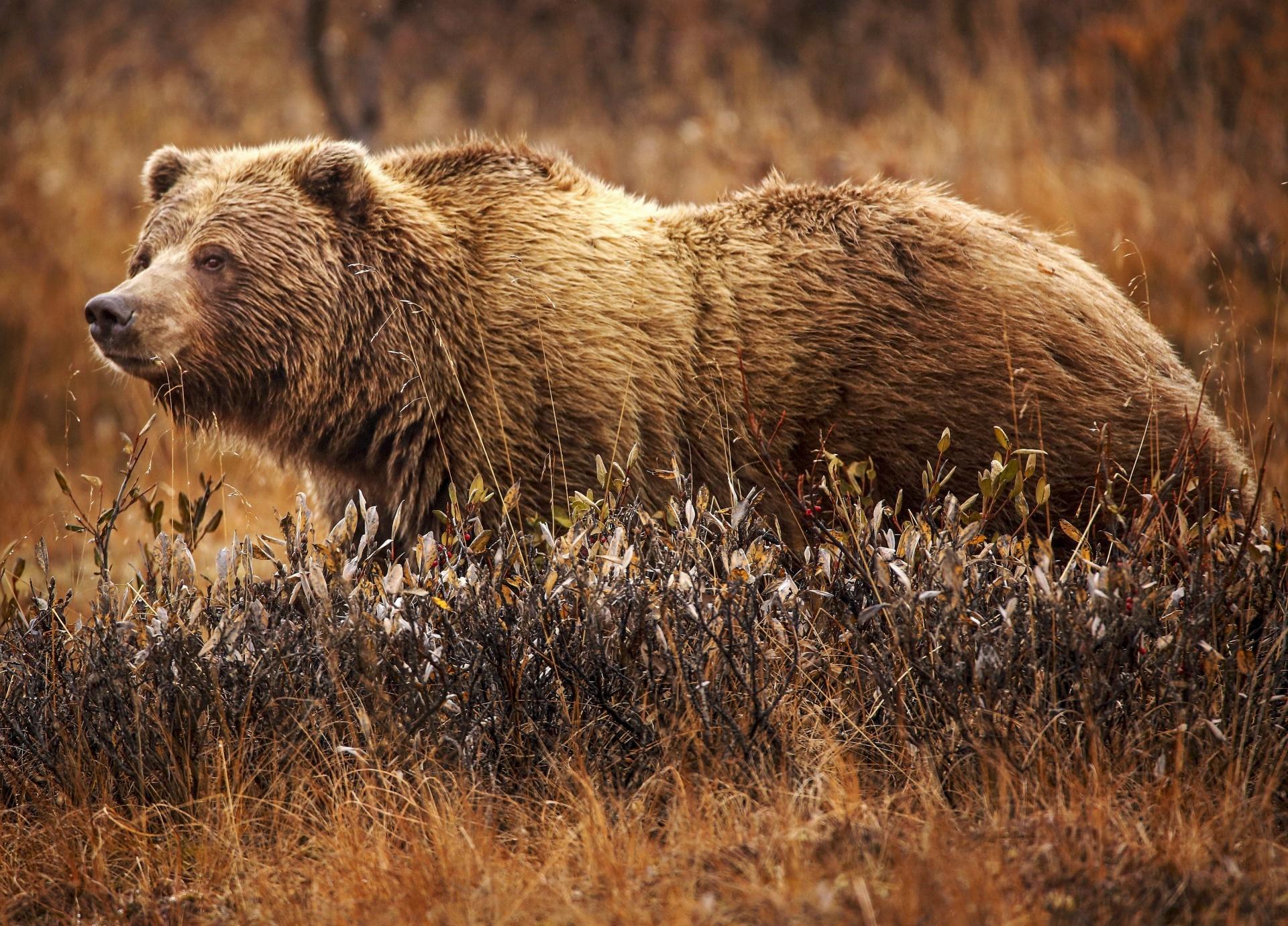 Adult grizzlies vary in color and are identified by their humped shoulders and sloping backside.

It is also the case that most grizzlies will do everything they can to avoid people. The few that become habituated to human contact, raiding trash containers or chicken coops, are quickly captured by state or federal wardens, given an ID number, and relocated to deep wilderness with a GPS tracker attached before they can cause real damage.

But the primal nature of a fatal bear encounter nearly always makes, if only briefly, national news. Three months before the attack in Ovedo, a grizzly killed a hunting guide outside West Yellowstone, Montana, where the man lived. The circumstances of Carl Mock’s death could not have been more different from Lokan’s. It happened in broad daylight and with no warning. Mock was able to phone for help, was picked up and transported to a hospital where he succumbed two days later.

Investigators returning to the scene killed a bear when it charged them. They presumed it was the same animal in Mock’s attack, apparently protecting a moose carcass discovered nearby. Mock, traveling alone along a river that covered any sound of his approach, likely surprised the animal while it was feeding after recently coming out of hibernation. It was a dreadful case of being at the wrong place at the wrong time.

Though bears in fatal encounters are always hunted and, if positively identified, killed, there is a significant difference in how wildlife managers respond when non-fatal attacks are judged to be the result of natural behavior.

An animal reacting to a perceived threat far from human habitation will not be euthanized if, unlike the bear that charged the team investigating Carl Mock’s mauling, it offers no present danger. Interestingly, as McMillion observes, most people who survive a grizzly attack do not blame the animal, recognizing that it was only reacting instinctively in a setting where humans are the intruders.

Before the advent of Europeans to North America, the continent’s omnivorous brown bear was the apex predator, ranging from the Bering Strait across to Hudson Bay’s western shore, down through British Columbia, the continental U.S. from California across the western plains, and into central Mexico.

Indigenous people were awestruck by its tremendous size and strength, and ascribed the grizzly with great totemic power. It was rarely hunted and, when it was, the hunters treated it with the respect and seriousness reserved for warfare. 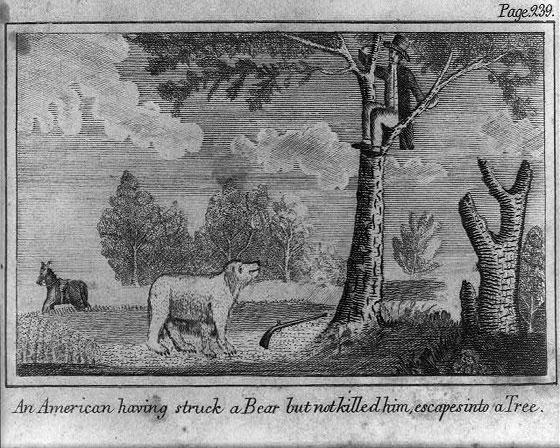 An early-19th century print depicting a Lewis and Clark expedition member treed by a grizzly.

The 1805 Lewis and Clark expedition provided credible first-hand accounts of the ferocious animal that seemed to be everywhere and proved very hard to kill by shooting with their long rifles. But firearms, horses, and habitat destruction gradually drove grizzlies from the grasslands into the deep reaches of the Rocky Mountains.

There is no known instance of a grizzly attacking a mounted rider in a U.S. national park. The combined size of a horse and human is big enough to frighten them off.

A Slow Return for a Threatened Species

In 1975, when the grizzly was named a threatened species, an estimated 700 to 800 bears lived in only two percent of their former range in the lower 48 states, most of them in or near Yellowstone Park. By 2021, U.S. government estimates put the grizzly population at about 1,900 animals now ranging over six percent of their historic habitat.

Compared to other protected species, such as bison and wolves, grizzlies reproduce very slowly. Sows have one to four cubs, delivered and nursed during their five to seven-month hibernation. An undernourished mother will produce weak offspring that end up easy prey to wolves and other bears. Unlike wolves and bison, bears are highly individualistic, with no group behavior beyond the relationship between sow and cubs, which can last from two to three years. 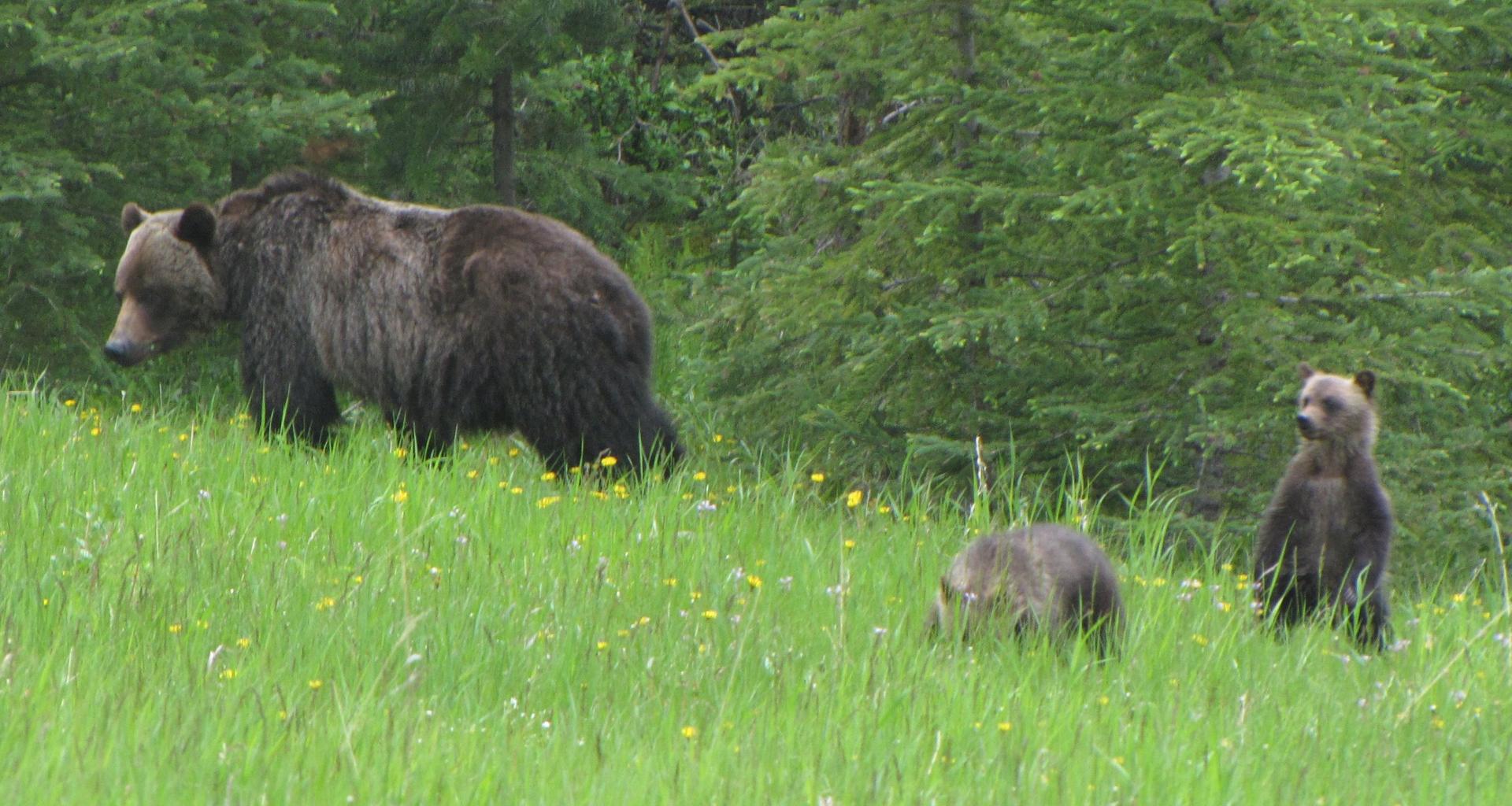 Living, at best, around 25 years, females do not reach reproductive maturity until age eight. Figuring an average litter of two cubs every three to six years, a normally healthy female might produce 11 cubs in her lifetime, less than half of which can be expected to reach the age of parenthood.

However slow their reproduction rate, grizzlies are expanding their range around Yellowstone Park and eastward from Montana’s Bitterroot Mountains into the high plains exactly where Lewis and Clark first met them. The problem is the land is home now to towns and ranches.

This has caused an increasing number of bear/human encounters, most of them harmless, if scary. These incidents are behind a call from certain quarters for delisting the animal as a protected species, and instituting a hunting season. However, in March 2021, the U.S. Fish and Wildlife Service confirmed the grizzly’s threatened status for five more years. So, if we’re going to live with bears, as in any healthy relationship, we need to understand a few things.

How Bears See Us

Grizzlies view humans as another type of bear, and treat us accordingly. In most encounters, a bear will try to intimidate rivals with a bluff charge that stops a few feet from contact. When they are not bluffing, grizzlies dispense a level of punishment, clawing and biting, that rival bears are strong enough to handle. Both combatants usually walk away.

Unfortunately, human muscle mass has just half of the fiber density that powers a grizzly, and we also lack the furry coat and deep layers of fat that buffer a bear’s razor-sharp four-inch claws when two rivals clash. In a fight, grizzlies first go for their opponent’s face to neutralize the jaw, then bite any moving limbs while raking the spine with their claws. Consequently, humans suffer gruesome upper-body injuries in a bear attack.

A mature male grizzly can weigh up to 800 pounds and stand over six feet tall. If that’s not impressive enough, they can also run as fast as 30 miles per hour.

To avoid the worst in bear country, here are the Do’s and Don’ts people need to abide by:

Beginning with the aforementioned stowing of food (preferably hung over ten feet from the ground, far from sleeping tents) and leaving camp at the first sign of bears:

Bear country visitors most often attacked are bow hunters, nature photographers, and trail runners. The first two will stealthily approach animals for their respective shots – a bad way to meet a grizzly – while joggers keep their eyes on the ground in front of them, and too often listen to music through earbuds. Should trouble find them, they will be the last to know.

The Grizzlies’ Rightful Place in Our World

The plain truth to living with grizzly bears is having enough respect for them to change your behavior. Maybe do your running elsewhere; sing on the hike even if it feels silly; stand back and use a long telephoto lens (at least 600mm) for your wildlife photos.

The worst times to encounter grizzly bears are before and after they hibernate. They eat frantically in the fall – mainly roots, berries, grubs and burrowing rodents – to build the fat necessary to get them through the winter. They are groggy and ravenous in spring, some females caring for new cubs.

The ecological effects of grizzly bears, omnivorous apex predators, are multifaceted. They disperse berry seeds widely through their scat, promoting plants that benefit songbirds and insects, while their digging and clawing for edible roots spreads oxygen and other nutrients through soil. They cull elk and bison herds of weak and sick animals, and provide meat for scavengers like coyotes, ravens, eagles, magpies, and crows.

Like bison, grizzly bears are magnificent animals that represent the awesome beauty of the North American continent. In the 1800s, Californians were so impressed with the grizzly that they put it on their new state flag, then drove it to extinction there. Surely modern Americans can find ways to live with this great animal, aware of the dangers it can present and willing to take the steps necessary so that no one, human or beast, suffers needlessly for living near each other.

Takaya the Sea Wolf: A Story of Evolution and Climate Change

Before his untimely death, Takaya, a rare and curious sea wolf from British Columbia, captivated the imagination of many – and sparked old conflicts about conservation, Indigenous…

Endangered and threatened species face possible extinction. Leading the effort to save them is the International Union for the Conservation of Nature, which publishes the “Red…