It’s been a rough year for America’s space science program. Things are going wrong, both on the Earth and in the sky. Notably, Earth’s 57-year-old Arecibo telescope imploded under its own weight in December 2020. Out in space, from June to July 2021, the 31-year-old Hubble Space Telescope was entirely out of commission. And back on Earth, we are still awaiting the launch of the James Webb Space Telescope, possibly in November 2021. Will things improve? Only time, and increased U.S. government funding, will tell.

In the dense, subtropical forests of northern Puerto Rico has sat a leftover of the Cold War that’s served American military and scientific interests since 1963. Named after the ocean-hugging municipality of Arecibo, this relic, an enormous radio telescope, was set into a depression in the porous limestone foundations of the sandy soil – a huge natural bowl, ideal for its purpose.

The Arecibo observatory, with its 900-ton main platform suspended by 16 massive steel cables above the dish of the 1,000-foot-wide telescope, was originally designed to assist U.S. intelligence in monitoring the ionosphere for early warning signals of a potential Soviet missile attack.

Following the tumultuous 1960s and a reshuffling of American interests, responsibility for the Arecibo Observatory shifted from the Department of Defense to the National Science Foundation (NSF), and its mission shifted accordingly. With these changes, the primary purposes of the observatory expanded from monitoring potential Soviet threats to the study of atmospheric and planetary sciences, and radio and radar astronomy.

As a radio telescope, Arecibo was the perfect “ambassador to space” when, in 1974, the observatory launched an attempt to communicate with possible extraterrestrial intelligence, sending what’s called the “Arecibo message.” (We’re still awaiting a reply.)

Flash forward to an early summer day in 2020, and researchers at Arecibo heard a faint “ping” from the telescope’s cable supports. The sound indicated that one of the 200 braided steel cords that comprised each of the support’s 16 cables had snapped. Perhaps this should have set off alarms, but the cables were designed to hold even greater weight than they were supporting. The durable construction of these cables reassured the Arecibo team that failure of a single cord was a minimal disturbance. 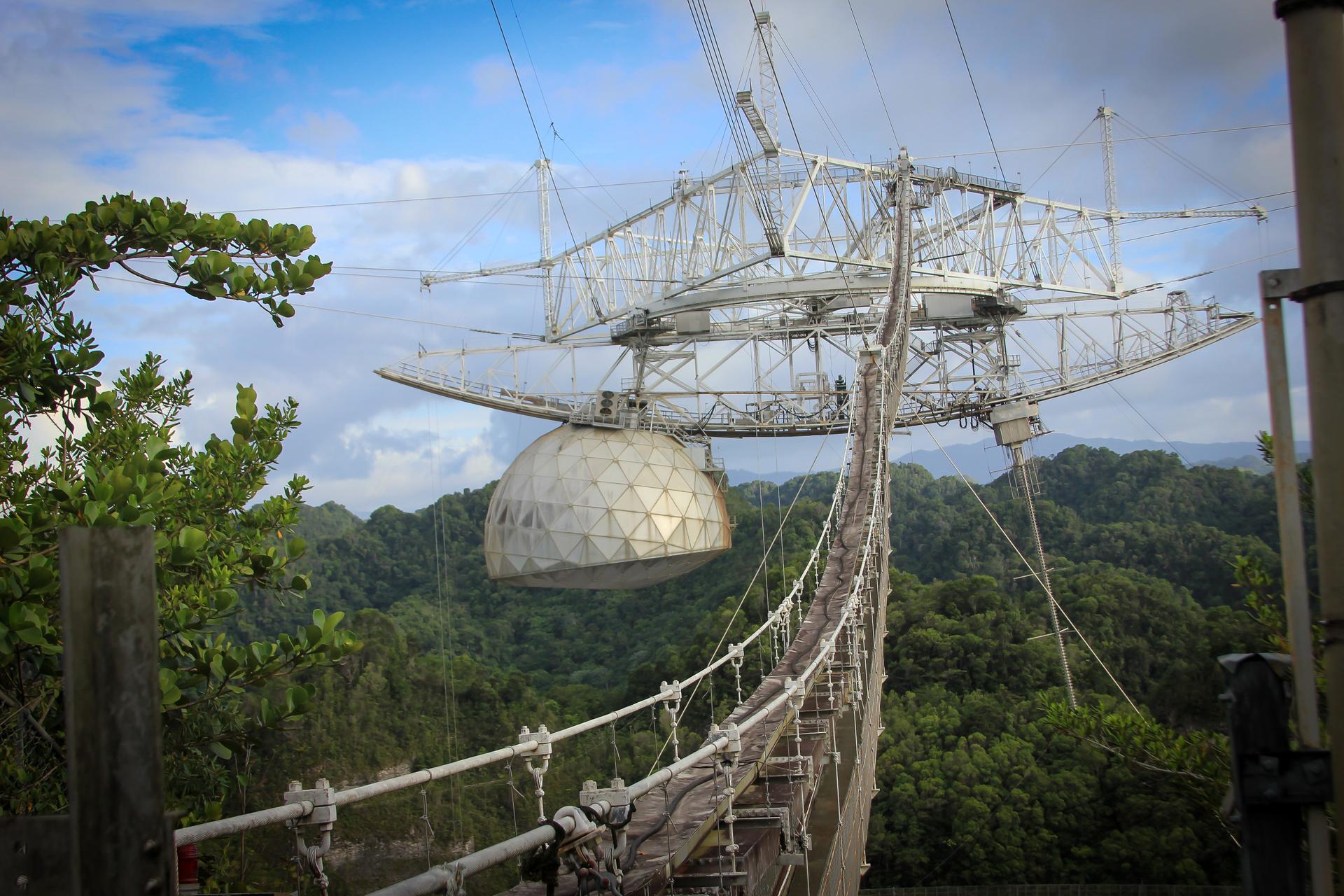 Suspended over Arecibo’s dish was its main platform, including scientific instruments and the half-sphere geodetic dome. (Image Credit: NSF)

But then, a day soon after, came another ping. And another ping on another day. Each snapped cord indicated that a cable was losing its tensile strength, yet there was no official reaction. Then, in the early morning of August 10, the accumulated stress caused a cable to slip from its moorings and snap. That incident marked the end of Arecibo’s functionality as a telescope, though other operations at the observatory continued.

A second cable failed on November 6. And finally, on December 1, 2020, after the entire campus had been evacuated, the equipment platform suspended above the telescope’s spherical reflecting mirror came crashing down. The damage was beyond repair, and the crown jewel of American radio telescopes was in shambles.

Arecibo: Could It Be Rebuilt?

Why did this happen? Although NSF reported to Congress that all maintenance to the observatory, including the towers and cables, was up-to-date and unaffected by a series of budget cutbacks, it’s clear that time was the enemy of the constantly stressed supports for the platform. More than half a century of time took its toll on the structural integrity of the telescope.

If you’re a fan of James Bond films, you may remember the Arecibo Observatory as the site of the climactic battle between Bond and the forces of evil in 1995’s GoldenEye. Arecibo also played a key role in the 1997 film Contact.

So, now what? Despite stiff odds, there are many affected parties unwilling to concede the loss of this site as a terrestrial space science center. Local loyalists cite the value of the observatory to Puerto Rican pride, and to its economy. Others are motivated by a desire to maintain a healthy competition with the Chinese, whose 500-meter Aperture Spherical Telescope (FAST) exceeds Arecibo in size but not capability.

However, space science programs are funded by the U.S. Congress on a ten-year plan, and the most recent plan, for 2021–2030, was approved just prior to the Arecibo implosion. For interested parties, waiting until 2031 to secure funding to restore and upgrade the telescope is unthinkable.

But it will take an extraordinary lobbying effort to obtain special, out-of-cycle funding for a project with budget estimates into the billions of dollars. Though Puerto Rico lacks direct voting representation in Congress, perhaps – at least for national security reasons, if not just for the science – a bill will find sponsorship.

From the Earth to the Sky – Is It Time to Retire the Hubble Space Telescope?

While the problems in Arecibo continue to bedevil us on Earth, there have been problems up in orbit as well. Beginning June 13, 2021, and continuing till July 17, all activity aboard the Hubble Space Telescope ceased due to an onboard computer error. That’s right, the stream of high-definition images of cosmic phenomena we’ve come to expect from Hubble ceased, along with all its other ongoing astronomical observations, because of a missed computer “handshake.” 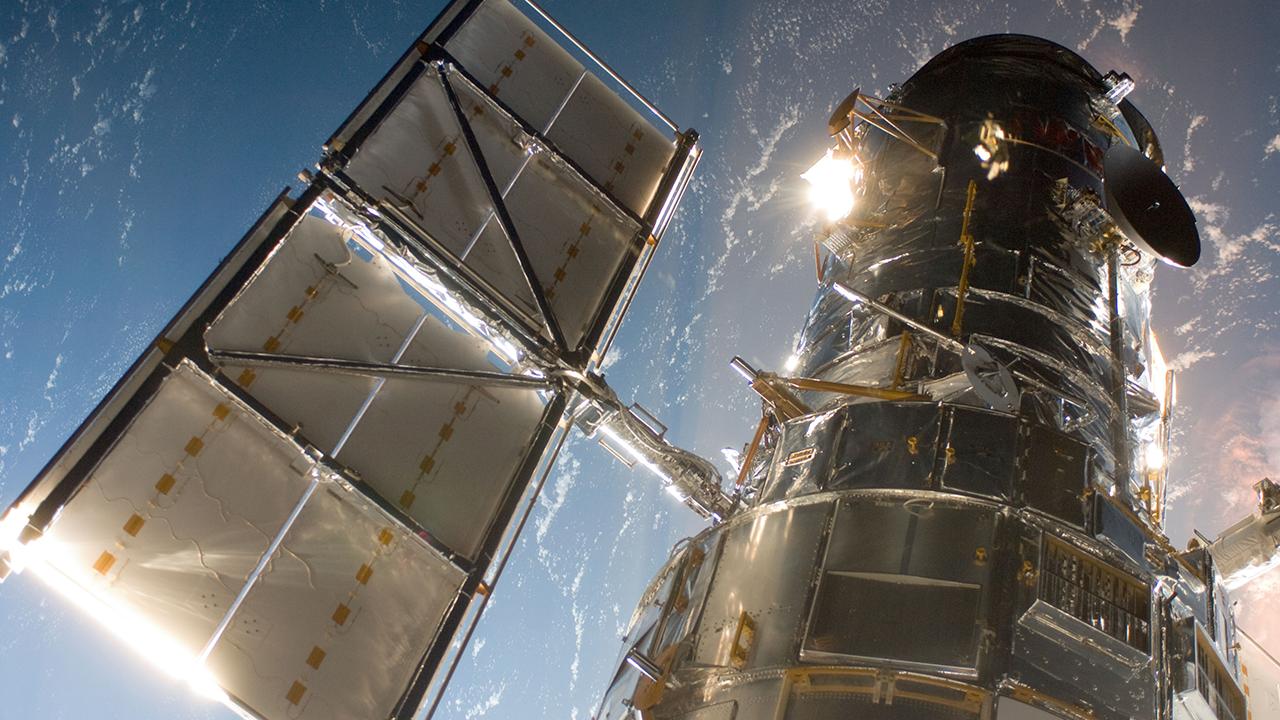 Of course, the Hubble telescope is no stranger to technical problems and design issues. Soon after its launch in 1990, it was discovered there was a flaw on the surface of the telescope’s mirror, and many were worried that the extraordinarily expensive space investment would be useless. As recounted in the documentary Hubble: Eye in The Sky, the mirror was repaired by astronauts in a daring U.S. space shuttle mission.

Initially, in the summer 2021 debacle, the failure of two computer modules to complete a “handshake” to begin the transmission of data indicated that the problem’s source was the payload computer. This unit controls all the telescope’s science instruments, coordinates their functions, as well as monitors their health and safety; consider it a sort of nervous system for all the instruments and their interfacing. It seemed logical to test there first.

The first round of tests demonstrated a wider failure than could be remedied by the payload computer. In fact, even the backup system failed when tested, suggesting that the problem was more widespread. On July 14, 2021, NASA announced that an element of the payload computer – this time the PCU, or power control unit – had been identified as the prime suspect in the mystery.

That hypothesis proved correct; on July 16, Hubble’s nonfunctioning computer was switched to backup control, and by the next day, the telescope and all other systems were “go.” NASA released new images taken by the restored telescope on July 19.

While all the instruments aboard Hubble were placed in “safety mode” (i.e., turned off), the telescope itself had to remain in motion to maintain its thermal stability. It was repositioned on a set schedule, even though the telescope was nonoperational. 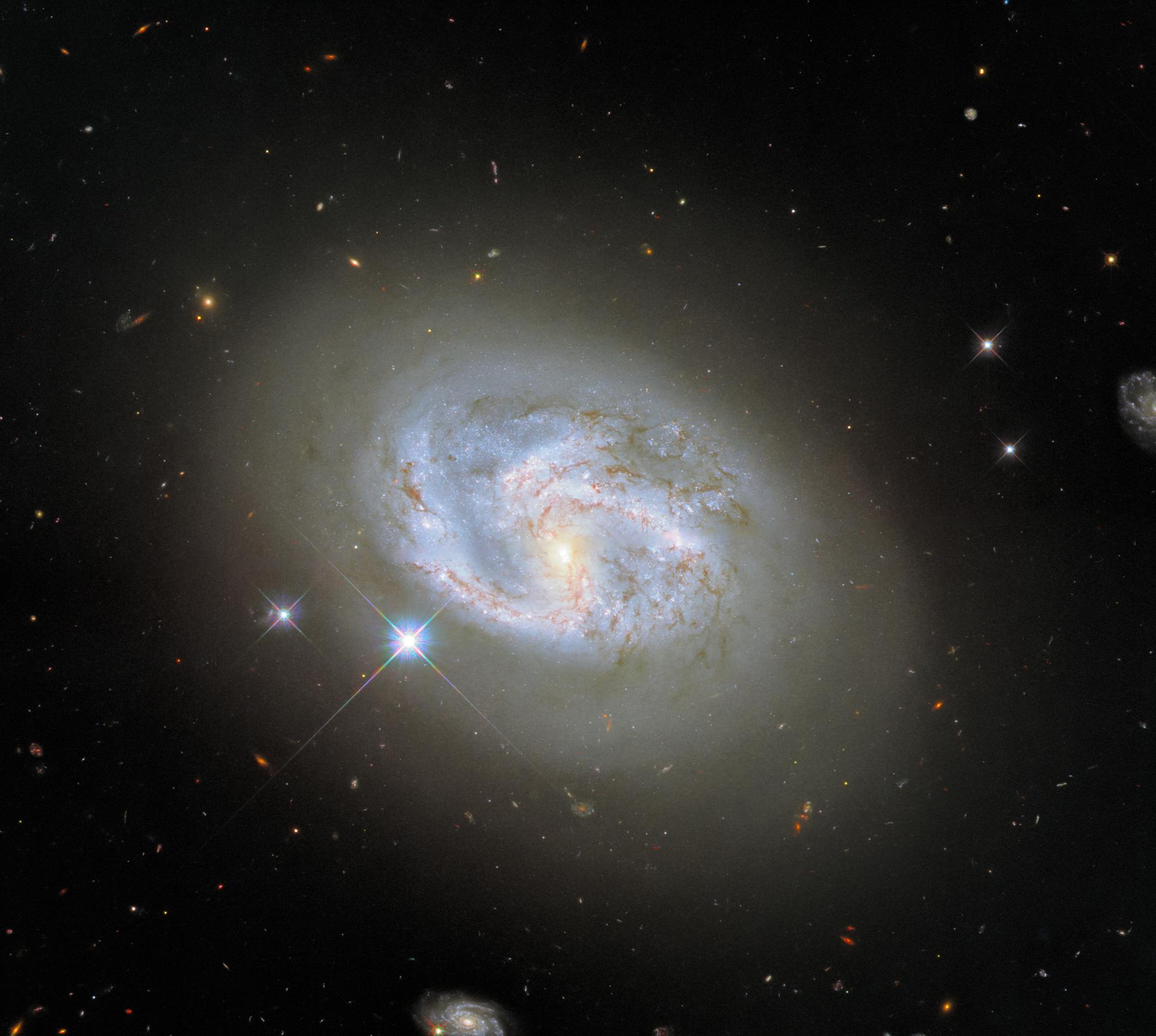 The Webb Space Telescope: Advanced Successor to the Hubble

It was not so long after the launch of the Hubble Space Telescope – and the beginning of its stream of amazing cosmic images – that space agencies representing several countries began batting around the idea of an eventual successor.  But to justify the enormous costs, the proposed super-telescope would have to peer farther into the heavens than any predecessor.

Project development began in 1996 as a collaborative effort among NASA, the European Space Agency, and the Canadian Space Agency. It was called the Next Generation Space Telescope (NGST) and had an initial budget of $500 million. At that time, the team estimated that the NGST would be fully operational by 2007.

Soon after, though, changes in the program led the team’s engineers back to the drawing board in 2005 for a thorough redesign incorporating the latest advances in technology. The mission, renamed in 2002 to honor longtime NASA Administrator James Webb, grew dramatically, as did the budget. Total project cost to date has reached $8.8 billion, a far cry from the 1996 vision.

Along with the project’s growth have come many delays. The initial launch date has slipped at least six times, from its first planned lift-off in October 2018, to 2019, 2020, and then, due to the COVID-19 pandemic, to March 2021. Because of the pandemic’s requirement to limit the number of staff permitted in workplaces, that spring 2021 launch was postponed to late October 2021.

But in June 2021, NASA determined that the program needed more time to fully prepare for a successful launch. It announced a further delay of the project, to mid-November 2021, this time to inspect Webb’s nose cone, which has been experiencing problems separating properly. The cone, also referred to as the “payload fairing,” is the covering on top of the payload.

How Webb Will Outperform Hubble

Once the Webb telescope is finally launched, it promises to outdo Hubble in every way. Developed by the Goddard Space Flight Center and manufactured by aerospace giant Northrop Grumman, Webb is much bigger and more advanced than Hubble. It will produce images of much greater clarity and depth of field due to the size and design of its mirror and to its location at a position in the sky called the second Lagrange (L2) point. 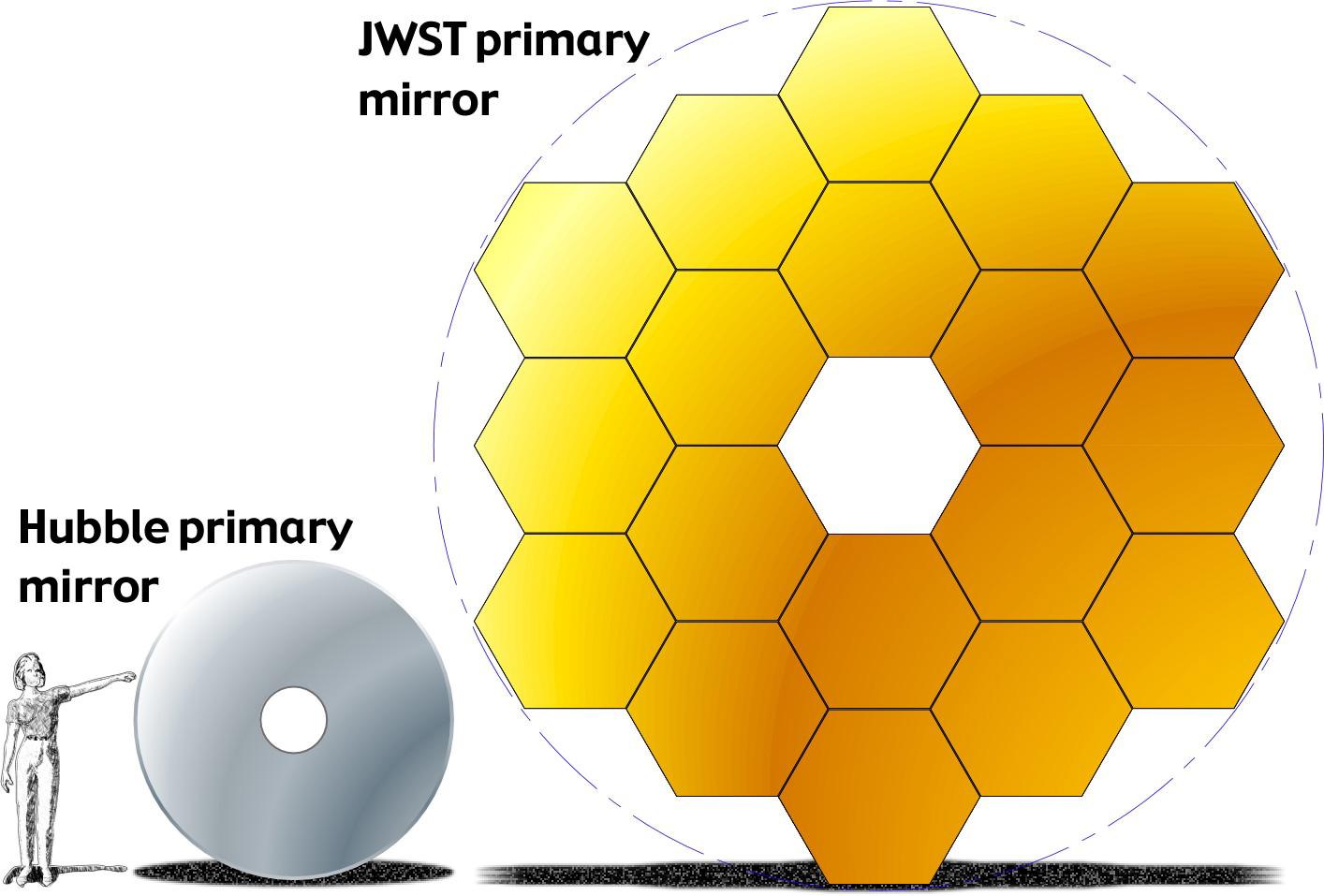 The Hubble Space Telescope has produced spectacular results with its ultraviolet (UV) and optical spectrum views of distant stars and galaxies. Scientists now want to see farther into the universe using infrared (IR) observations, and Webb will have much greater capabilities in this area.

Webb’s reflecting mirror not only dwarfs Hubble’s, but Webb’s design is remarkably different. In place of a single round surface, Webb’s mirror is constructed in an interlocking, honeycomb-shaped array of 18 hexagonal-shaped elements. And its giant mirror size of 6.5 meters in diameter will give it more than six times the collecting surface of Hubble’s 2.4 meter-diameter reflector. 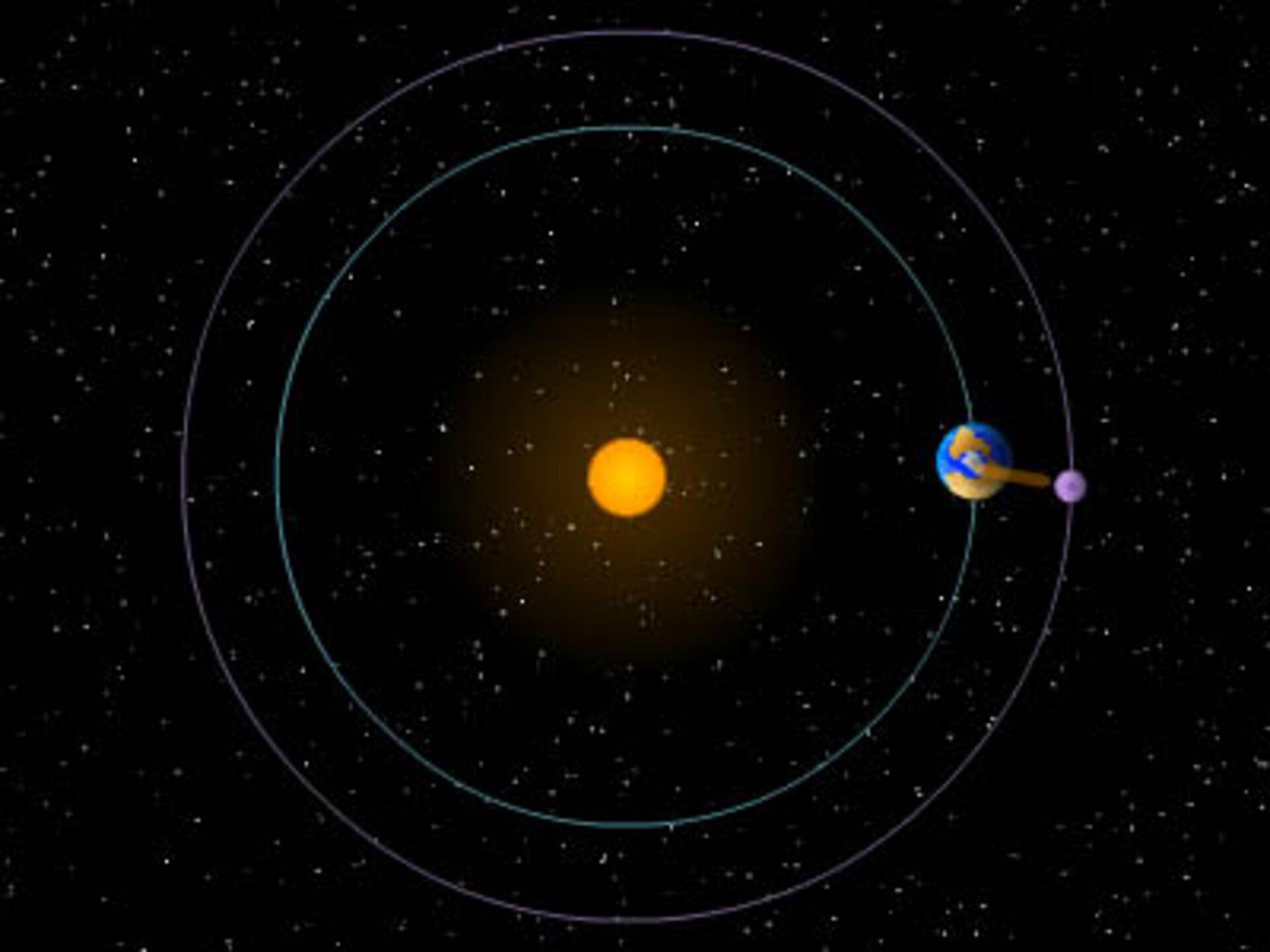 L2 is located directly “behind” the Earth as viewed from the Sun. (Image Credit: ESA)

Is There a Future for Arecibo and Hubble – and Webb, Too?

As astronomers and engineers consider the wreckage of Arecibo, the challenges of maintaining Hubble, and the delays in launching Webb, they surely must be a little anxious about the prospects for the three programs. Who could blame them for crossing their fingers into pretzels?

But wouldn’t it be amazing if, say, a year or two from now, all three telescopes were operating simultaneously? Imagine the jaw-dropping views of the heavens, the cosmic mysteries just waiting to be solved, the knowledge to be added to our steadily advancing understanding of the universe. Now that would be a happy ending.

The history of military R&D has been both comic and tragic. And unsurprisingly, in the 21st century the world’s military budgets continue to soar.

Galileo is recognized as the first man to use a telescope to gaze at the stars and planets. But since then, his hand-constructed telescope and its advances have only made it more…