Is there life beyond our planet? Space scientists are searching our galaxy to uncover exoplanets, some of which might support conditions for life.

When Alan Shepard became the first American to travel (however briefly) into space, in 1961, I was in second grade. From then on, space exploration was often topic no. 1 in our little Catholic classroom. Miss Randolph, a devout lay teacher, led her students in a discussion about encountering life in outer space. One day, after much debate, we students decided that any delegation to meet the first aliens had to include a Catholic priest so that, first thing, their immortal souls could be cleansed through the sacrament of baptism and directed home to Heaven.

Like most people then, and now, we were both mystified and thrilled to ponder the secrets of the Universe that stood to be revealed by human exploration of space. And yet we rushed to illuminate these secrets using the tools closest to us, our belief in the power of the Catholic Church to make these revelations both palpable and comprehensible.

We’ve all changed a lot since those heady early days of the U.S. space program, but I would wager that we still have some of that child-like wonder as we observe the night sky and dream what surprises lay in store for us . . . out there.

Today, we have the benefit of scores of exploratory missions to outer space, and our knowledge is growing virtually daily as scientists analyze data collected from numerous space probes. We still wonder, though: Is there life to be discovered beyond our planet?

Check out Other Earths on MagellanTV now.

What Are “Earth-like” Planets, and Why Are They So Desirable?

Our wonder about whether there’s life beyond Earth has led scientists to respond with a resounding, though preliminary, maybe. To date, despite our continuous scans of the skies over decades of space research, no signs of life other than on Earth have been detected. But let’s pause a moment to consider the odds of extraterrestrial life. Astronomers confirm that there are virtually countless planets orbiting stars within our galaxy and the myriad other galaxies that populate our Universe.

Estimates vary, but, based on observations by the New Horizons spacecraft, astronomers now believe there are at least 100 billion galaxies in the Universe. Now, let’s assume that each galaxy has hundreds of billions of stars. A few hurried scribbles on the back of a napkin and voilà! Quickly we discover there are “billions of trillions,” or, more precisely, quintillions of planets floating around in the heavens. Now, all we need to do is examine each one to discover whether life has developed on any of them. (Then we’ll send the priests!)

Recognizing the futility of trying to explore every possible planet in every galaxy, scientists have narrowed the search just to planetary systems in our own Milky Way. Even so, some have estimated that the number of “Earth-like” planets in our galaxy alone exceeds 10 billion! Artist's conception of an "Earth-like" planet at sunrise.

Now, just what do we mean by an “Earth-like” planet? That’s one that has in its chemical makeup some of the essential elements that are foundational to life on Earth, such as oxygen, carbon dioxide, or methane. The planets also need to be rocky in composition, instead of gas giants such as Jupiter and Saturn.

And, importantly, they must be in the habitable zone – also called the “Goldilocks zone” – of their planetary systems. Why Goldilocks? Because astronomers have determined that they can neither be too close to their stars (“Too hot!”) nor too far away (“Too cold!”) for life to have emerged. Such planets might have reservoirs of liquid water, which most scientists view as essential to support organisms similar to those on Earth.

In our Solar System, one moon of Jupiter, Europa, possesses an underground ocean. This makes that moon highly desirable as a site for further exploration.

Of course, even if we are able to narrow the search to a manageable number of exoplanets, the question – and the quest – remains: How will we identify truly Earth-like planets? And how will we be able to tell, from many light-years away, which of the possibly habitable planets might nourish actual life? 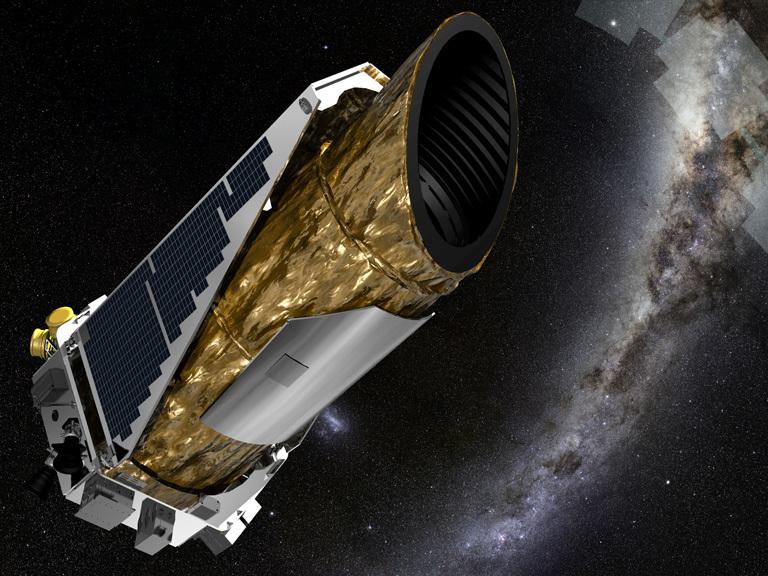 NASA's Kepler Space Telescope (artist's conception) searches for exoplanets by tracking their movements in front of the stars they orbit. (Credit: NASA)

International space agencies, not surprisingly, have been on this case for years. In 2009, NASA launched the Kepler Space Telescope specifically to search for exoplanets (defined as all planets outside the Solar System) within the Milky Way. The mission, which lasted until Kepler ran out of fuel in 2018, was a notable success. Remarkably, the telescope focused on only a tiny slice of the sky facing Earth, but it discovered well over half a million stars and 2,662 exoplanets.

Paradoxically, the Kepler Space Telescope determined that there are more planets than stars, though enumerating fewer than 3,000 exoplanets. Despite the limitations of Kepler’s planet-discovery tools, this finding has given scientists more hope of locating an Earth-like exoplanet.

In its scan of the Milky Way, Kepler's only onboard tool was a photometer, which identified some essential features of the exoplanets, such as mass and diameter. It would take a different type of outer space probe to learn such details as whether a particular exoplanet is rocky and potentially conducive to life, or gaseous and presumably less likely to host living things.

This other spacecraft is the Transiting Exoplanet Survey Satellite (TESS), launched in 2018 as Kepler’s transmissions ended. TESS went into space to analyze the many exoplanets first identified by Kepler and to determine which planets fit the parameters to be called Earth-like, with liquid water, and therefore worthy of closer examination.

So far, TESS’s research has uncovered approximately 40 planets that are both Earth-like and in their stars’ habitable, or Goldilocks, zones. The search will be furthered by the new James Webb Space Telescope, scheduled for launch, after many delays, for the end of 2021. The Webb should start sending back data from its observations as early as 2022.

Designed to exceed the Hubble Space Telescope in every way, the Webb will explore the Universe’s origins. It is also equipped to re-examine the Kepler stars and planets to determine the selected exoplanets’ chemical makeup and atmospheric conditions. This study will whittle down the list of Earth-like planets to a manageable number for even closer examination, perhaps by innovative means space scientists have yet to conceive.

Distances in space are mind-bendingly huge. The closest exoplanet to Earth is Proxima Centauri B, “only” 4.22 light-years away. But even that relatively small distance translates to nearly 26 trillion miles, a journey of tens of thousands of years for a probe to reach.

A ‘Super-Earth’ in Our Midst (Relatively Speaking)

So far, astronomers have located only one exoplanet that has been demonstrated to possess water – or at least water vapor – in its atmosphere. This planet, called K2-18b, is a “super-Earth,” which means it is at least 1.5 times the size of our home. Some scientists believe that super-Earths may be in a better position than even Earth itself to support life. Artist's conception of Proxima Centauri B.

Such a planet could even be in a hypothetical class of exoplanets described as “super-habitable.” But no planets have yet been found that meet the requirements of that label, which describes older, larger, and warmer planets than Earth that may also be capable of harboring an even greater diversity of life than found here.

At present, all we know about K2-18b is that it has detectable water vapor and moderate temperatures. However, its atmosphere contains a plentiful amount of hydrogen, meaning that life on this planet, if any, would not resemble that on Earth. Perhaps the Webb will be able to unravel the mystery when it is fully operational.

Enrico Fermi and the ‘Fermi Paradox’

The serious search for life beyond Earth has hardly begun and is likely to continue for a very long time indeed. But, even given the time and distances involved, what if the search turns up nothing? As it happens, great minds have given serious consideration to this for thousands of years, and the results are thornier than you might expect.

One summer day in 1950, physicist Enrico Fermi was having lunch with a group of fellow scientists, including Edward Teller. It was a casual, wide-ranging discussion regarding interstellar travel, the possibility of faster-than-light speeds, and the controversial UFO scare that took over American culture in the years following WWII. In the course of the conversation, Fermi popped an impertinent question: If the Universe is as old as we suspect, why hasn’t intelligent life visited us yet?

Fermi’s exact words are lost to time, but the query demands to be taken seriously. There are around 100 billion stars in our Milky Way alone, and an even larger number of planets of all types. Earth is a young planet in a more recently formed galaxy than many others. So it stands to reason that if life in the Universe is plentiful, an extraterrestrial civilization somewhere out there would have been seeking us – as we are seeking them – but with a head start of millions of years.

Even with the great distances of space, Fermi reasoned, the lack of contact with intelligent life from elsewhere in the Universe suggests that such life would be, at best, fragile, short, and lacking in technology. Otherwise, it stands to reason that an extraterrestrial probe moving through interstellar space would have reached us by now.

We’re left with the somewhat haunting possibility that maybe we are alone. Perhaps the complex processes and upheavals that happened to and on our planet were just the rare kickstart to life that created us, but the result elsewhere is a paucity or even an absence of life.

However, we seem to be an optimistic species, overall. Our technology has created the means to seek out life within a radius of trillions of miles, or more. Importantly, it seems that our species holds within its collective heart the desire to seek out new and unknown things. The search for intelligent life within our galaxy may be a long shot, but we won’t easily give up on our quest.

Astrophysicists have laid out ages that define the duration of our universe, from the opening moments of the Big Bang through our current era to the endpoint of everything, when…

Black holes were once thought of as an oddity arising out of Einstein’s relativity. Now they play major roles in movies like Interstellar. Among their magical properties is the…