What Caused the 1959 Cuban Revolution?

To many modern tourists, a visit to Cuba feels like a trip back in time. Over six decades have passed since the Cuban Revolution was led by Fidel Castro, but some things have remained stuck in the past.

Until Fidel Castro’s death in 2016, the island nation of Cuba was stuck in a time loop of fraud, corruption, and repression that deprived the Cuban people of the technological advances of the 21st century. The 1959 revolution had changed the trajectory of Cuba’s role on the world’s stage, but it had also frozen its people at that moment in time. With so much change happening so rapidly – the implementation of a socialist government, the establishment of social services, and the fallout from economic sanctions imposed by the United States – Cuba's social and cultural freeze can be viewed, in retrospect, as a coping mechanism for the tumultuous revolution that turned the nation upside down.

What Were the Main Causes of the Cuban Revolution?

On December 2, 1956, a young Fidel Castro, his brother Raúl, Che Guevara, and 79 other Cuban exiles disembarked from the 43-foot yacht, Granma. They were three days late, 15 miles from their target location, but their arrival on Cuban shores was the right place at the right time for marking a pivotal moment in the Cuban Revolution.

Following decades of economic exploitation that led to social unrest across Cuba, this band of revolutionaries struck at the powerhouse of the presidency to change how the nation would govern itself. The first half of the 20th century had seen a succession of leaders seize power in very different ways across the Caribbean archipelago. In Cuba, from governors to presidents to dictators, the roster of leaders had as many twists and turns as the revolution that changed the trajectory of the nation’s role in the world.

Fulgencio Batista was a military leader turned dictator who used popular support to justify his authoritarian regime. In 1933, he led fellow officers alongside students and labor leaders in a rebellion against then-President Gerardo Machado. After that, Batista worked closely with an ambassador from the United States to leverage his influence to displace provisional president Ramón Grau San Martín. From that point on, Batista controlled Cuban leaders from behind closed doors until his formal election as president in 1940.

Batista’s presidency oversaw the ratification of a new constitution that aimed to create a set of rules to guide Cuba, emphasizing government interference in economic matters as well as social ones. He legalized the Communist Party in Cuba and brought them into his government. 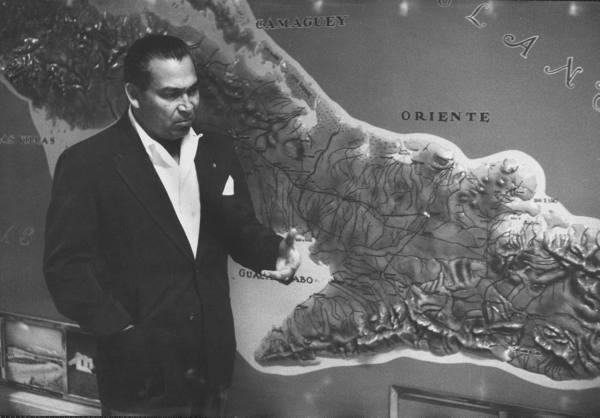 When he ran for reelection in 1952, Batista realized his support had dwindled and legitimate election was unlikely. He staged a bloodless coup d’etat that codified corruption in Cuba and set the precedent for dictatorial rule. His new era of power opened up Cuba to a larger gambling scene and invited foreign investors to throw money at the most exploitative industry in the country. Batista would go on to revoke Cubans’ right to strike and suspended a number of civil liberties following widespread opposition to his rule.

The U.S. Intervenes in Cuba

Following the Spanish-American War in 1898, the United States formally established its connection to Cuba with the Platt amendment, a treaty which advocated for Cuban independence but permitted U.S. military intervention. To that end, the United States established an outpost at the Guantánamo Bay naval base. As a result, Cuba’s neighbor to the north had secured a presence on the island, making U.S. military interventions in 1906 and 1917 easy to coordinate.

American economic interests in Cuba’s sugar exports also led many businesses and individuals to invest in Cuban infrastructure and plantations to reap the benefits of the island nation’s most profitable product. Supporters of the revolution saw U.S. influence as an attempt to extend imperialistic power over Cuba. If engaging in a bloody overthrow of the republic’s dictatorial regimes meant the reduction of American interference, many rebellious Cubans were willing to pay the price.

Fidel Castro Plants the Seeds of a Popular Revolt

In the days leading up to Batista’s seizure of the government, Fidel Castro had been campaigning for a seat in the Cuban congress, eager to use his experience as a lawyer for the good of the Cuban people. When the opportunity to serve the people slipped away, Castro made the transition from reformist to revolutionary.

On July 26, 1953, Castro led a group of rebels into the Moncada army barracks with hopes of seizing enough arms to shut down the Batista regime. The attempt failed. Those who stormed the barracks were either arrested or executed, stopping the revolution in its tracks. The Castro brothers along with Che Guevara initially fled to the Sierra Maestra mountains but were later captured and sentenced to 15 years in prison.

While this event was a failure, it cemented Fidel Castro into the Cuban consciousness as a passionate rebel, willing to sacrifice everything for the sake of the revolution. July 26 would become the namesake for the revived guerilla campaign in 1959 that would successfully overturn Batista’s regime. Castro named this movement in honor of his fallen comrades who died at Moncada.

When Did the Cuban Revolution Start?

Christopher Columbus’s first voyage in 1492 led him to land first in the Bahamas, then on the northern coast of Cuba a few weeks later. Within a few decades, the Spanish established colonial rule across the island, enslaving indigenous people and trafficking in hundreds of thousands of Africans to work on sugar plantations.

Cuba was the largest slave colony in the Hispanic Americas. Estimates indicate that 800,000 people were brought across the Middle Passage to supply slave labor.

In the 19th century, Spain lost its grip on most of its colonies in the Americas but kept a hold on Cuba and Puerto Rico. As its neighbors found independence, Cuba saw economic exploitation of its lands and people by its Spanish overlords as well as by U.S. businesses looking to turn a profit from its ample natural resources.

In total, Cubans would wage three wars against the Spanish to secure their independence, beginning with the Ten Year’s War from 1868–1878, La Guerra Chiquita in 1879, and finally the Cuban War for Independence, which ended in 1898. The United States’s intervention in this final conflict was called the Spanish-American War, which ousted Spain as an imperial power and passed the power over Cuba into the hands of the United States. Decades of fighting culminated in independence from Spain, but Cuba was far from independent of outside influence.

From 1899 to 1902, provisional governors ruled Cuba through military administration by the U.S. government. This period saw a rise of Cuban-born people serving in government roles, and afforded time for the island nation to draft a constitution to establish a new republic. Up until the revolution in 1956, Cuba remained an independent republic, but it suffered under leaders who made the nation feel anything but free.

When Castro led the 26th of July Movement back into Cuba, his forces moved inland from the coast, which had government airplanes scanning for the revolutionaries’ anticipated arrival. Along with his brother Raúl and Che Guevara, Fidel Castro led his team using guerilla warfare tactics throughout the highlands of the island. Over the span of two years, fighting plagued the countryside as armed rebels took on Batista’s military. Their mission was successful as Castro’s forces gradually overtook towns and displaced the government. 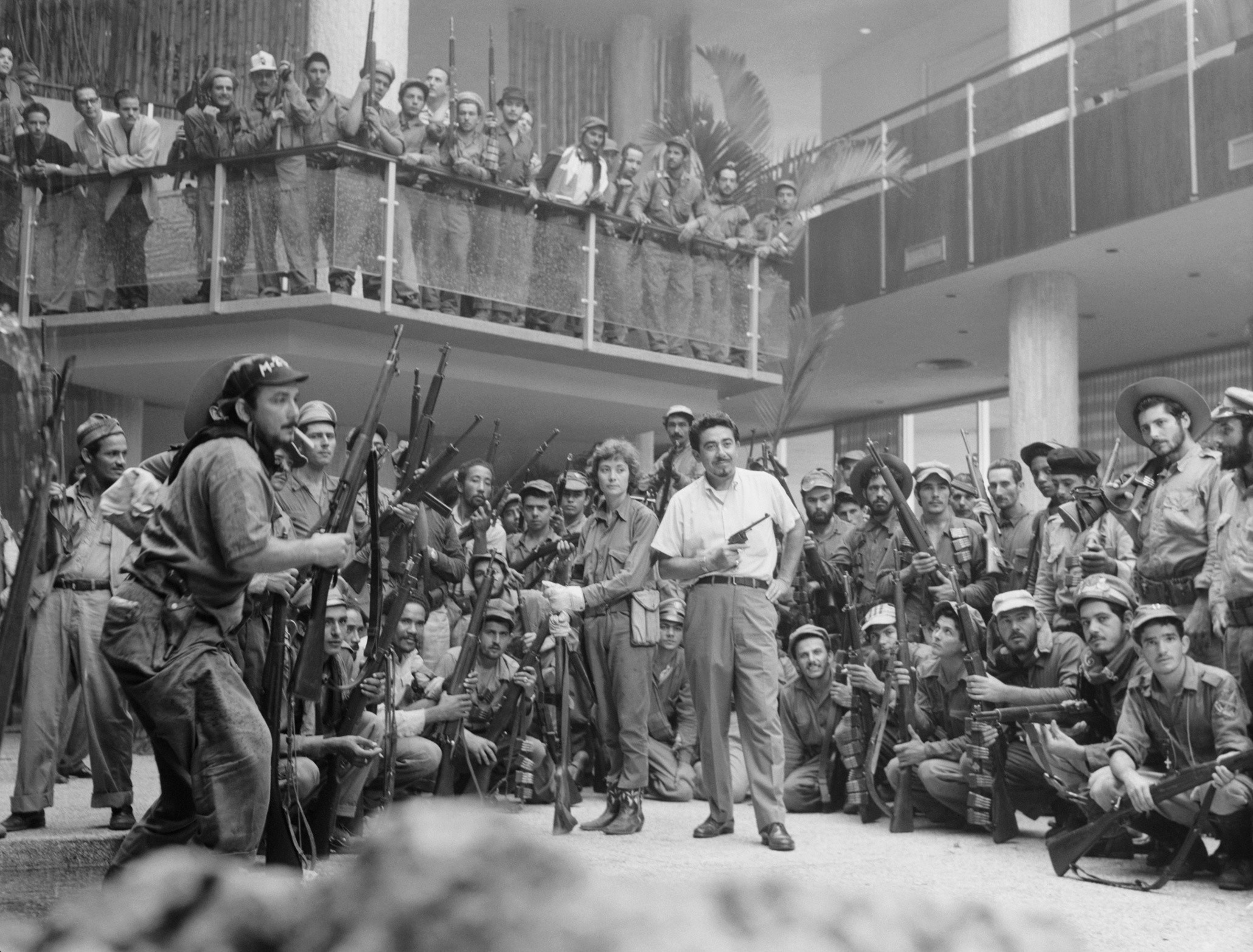 Until August of 1958, Batista’s forces attacked the July 26th Movement, following the revolutionaries’ storming of Cuba. The tides began to turn toward the end of the year, as the rebels abandoned their defense strategy for a more offensive one. Battles fought at Guisa, Yaguajay, and Santa Clara solidified the rebels’ gains and prompted a panicked Batista to flee to the Dominican Republic in early 1959.

How Did the Revolution Affect Cuba?

It is estimated that only about 2,000 people died during the revolution itself, though the resulting chaos and instability affected tens of thousands across Cuba. In contrast, Batista’s regime saw 1,577 Cubans executed for holding opposing viewpoints and was widely denounced for conducting torturous massacres.

While the revolution aimed to move Cuba away from these dictatorial abuses of power, Fidel Castro’s government also committed heinous acts of violence, torture, and abuse. Castro implemented a communist regime that executed soldiers and police who fought on behalf of the previous government. According to the Cuba Archive, 9,397  Cubans had been named as victims of the Castro regime. From firing squads to “extrajudicial assassinations,” men, women, and children in Cuba died at the hands of a government that was established to protect the very same people.

In 1962, American President John F. Kennedy instituted sanctions against Cuba, barring trade, travel, and communication between the country and, practically speaking, the rest of the world. The sanctions were issued in the wake of the second “Red Scare” – the U.S. government saw a communist regime as a threat to economic stability in the Americas and viewed Cuba’s ties with the Soviet Union – especially military cooperation in the buildup to the Cuban Missile Crisis of 1962 – with alarm. The human rights violations that continued into the 21st century provided the United States government with another reason to sanction the island. 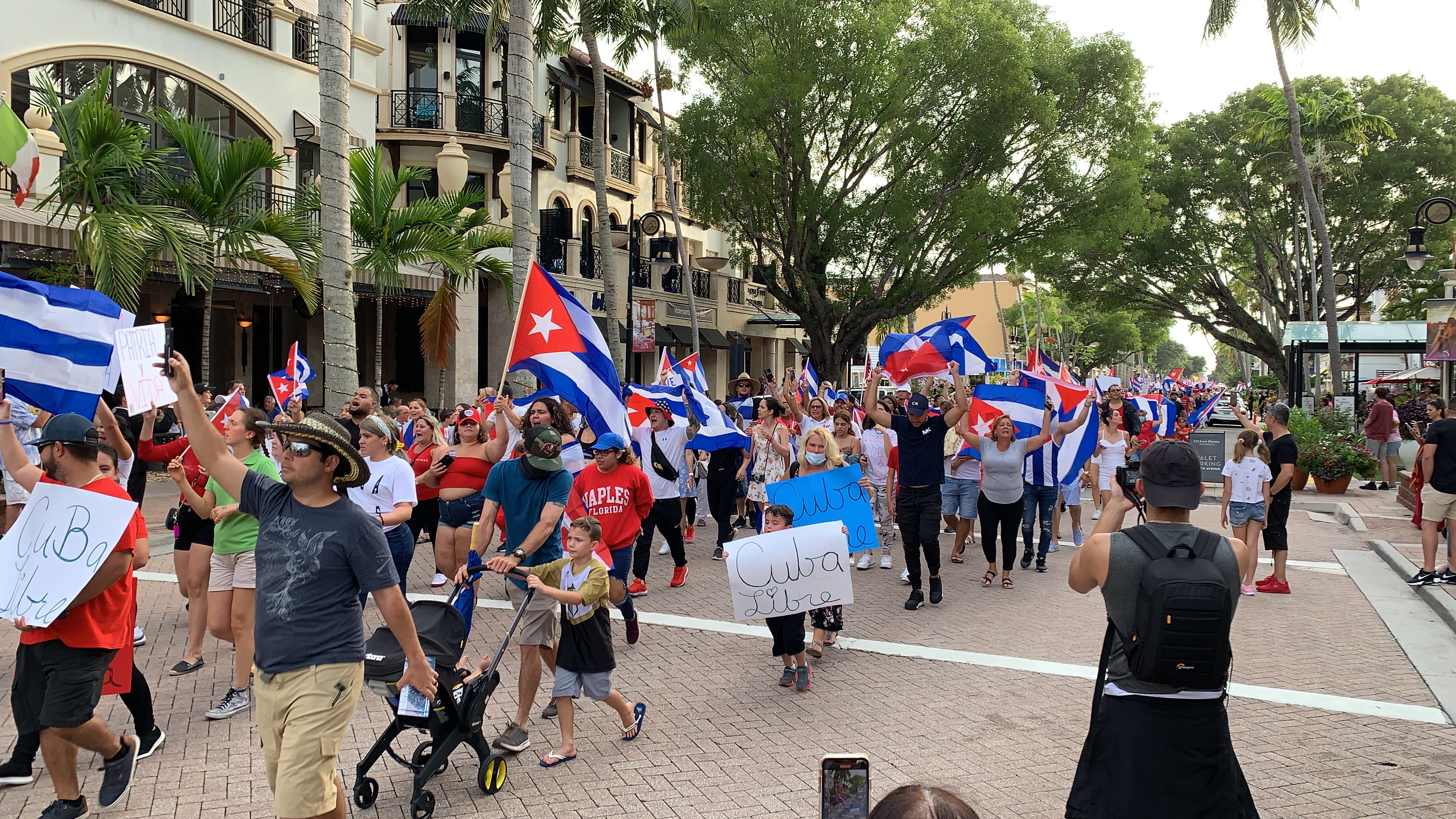 Protesters in Florida marching in solidarity with the 2021 Cuban protests. (Source: Wikimedia Commons)

In April of 2021, thousands of protestors marched the streets of Havana, taking a stand against the communist regime that has violated its people’s human rights for decades. Inflation was soaring, there were shortages of the COVID-19 vaccines, and everyday people were suffering in extreme poverty while state-run enterprises flourished by building exorbitant hotels and profiting from illegal activity. Today, communism in Cuba is under attack, and people around the world are taking a stand to fight against oppressive governments.

Want to Learn More About the Cuban Revolution and Who Led It?

The Cuban Revolution not only substituted one repressive regime for another, but also stifled the progress of its society, culture, and economy. The communist government left Cuba unable to advance beyond the patterns of corruption and violence that spurred a need for revolution in the first place. To learn more about the lawyer turned leader, the reformist turned revolutionary, watch Fidel Castro: Life for the Revolution to see how the Cuban Revolution played out from that man’s point of view.

Between the Haves and Have-Nots: The Radicalization of Young Fidel Castro

Fidel Castro transformed his country in Cuba’s 1959 revolution. What early influences led Castro to this radical act? Following a childhood marked by extremes, he used his…

The Middle East was an active theater of conflict during WWI. Following the war it was treated as spoils of war by the West, despite promises made for Arab self-determination.…

During the Cold War, the geopolitical stakes could not have been higher. But no episode combined audacity with deep secrecy and paranoia like the U.S. attempt to raise a sunken…