With her hard-drinking and high-drama mannerisms, gender-bending appearance, and heroic legacy, Calamity Jane was a notorious heroine of the Wild West. Her story has gripped the American imagination for more than a century, inspiring dozens of books, films, and TV shows. Despite of all the attention lavished on her by journalists and Wild West aficionados of all stripes, almost none of the details of her life are known for certain. But what can revisiting her story (or stories) reveal about the legacy of the West, womanhood, gender, and the nature of fame?

Way out in western North Dakota, there’s an area known as the Badlands. This sparse landscape was shaped by years of exposure to the wind and rain, making it immensely difficult to travel through and giving it a sense of haunted gloom. A woman known as Calamity Jane used to ride through these lands, often alongside her fellow frontiersman, Wild Bill Hickock. Or so the story goes.

There’s a possibility that very little of this is true. Calamity Jane is one of those historical figures whose identity is mostly fabrication, an illusion of grandeur and glory that disguised a life of carousing, alcoholism, and hardship. Her own autobiography is made up almost entirely of tall tales. Because of this, there are thousands and thousands of legends about the wild woman of the American West – and there’s almost no one-hundred-percent accurate information about her.

Yet her legend persists, just like the entire legend of the American West. The woman who dressed like a man and sharpshot her way into history has had a special grip on the American psyche for over a century. Jane may not have been the masculine-presenting angel of mercy that the tales describe, and she certainly wasn’t the charmer that Doris Day embodied in the movie musical named after her. In all likelihood, she was a heavy drinker and a weaver of tall tales who died alone in a hotel. 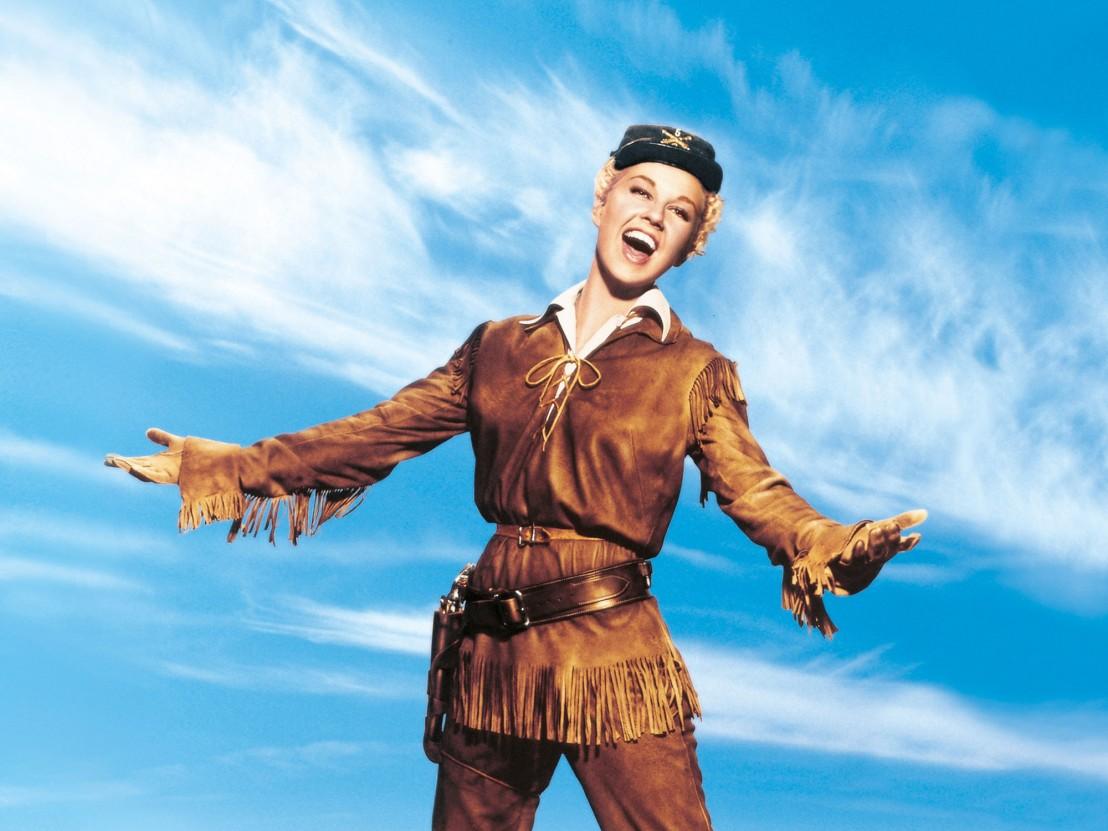 But one thing’s for certain: Jane was responsible for creating her own legacy. She was responsible for her own notoriety, and her infamy might reveal something about America itself or about the pliability of fame. It might even bring us closer to that most elusive of women, the human behind the myth: Calamity Jane.

Calamity Jane was (probably) born Martha Jane Canary on May 1, 1856, near Princeton, Missouri. (Some legends dispute this, but that is the overall consensus). Her parents, Robert and Charlotte Canary, were Virginians by birth and farmers by trade.

Though not much is known for sure about Martha Jane’s childhood or her five siblings, biographers who visited the town in an attempt to trace her life encountered a great deal of information about her mother, Charlotte. Apparently, Charlotte was a glamorous and flamboyant woman who would often parade around town on horses, wearing vibrant colors and bright makeup. (Some accounts even say she was an illiterate prostitute whose husband was attempting to reform her). Charlotte and her husband would occasionally commit petty crimes and were generally perceived as unruly citizens—though of course a lot of these speculations may have been influenced by the testimony of unfriendly neighbors and family members. Still, perhaps her parents’ wild actions influenced Calamity’s flair for drama and notoriety, which would haunt her throughout her life and ultimately shape her legacy.

"I figure if a girl wants to be a legend, she should go ahead and be one." —Calamity Jane, “The Life and Adventures of Calamity Jane: A Short Memoir”

Understandably, the death of Martha Jane’s parents had a huge impact on the girl’s life. At only 12 years old, Martha was forced to adopt a vagabond’s lifestyle, taking whatever job she needed to survive. 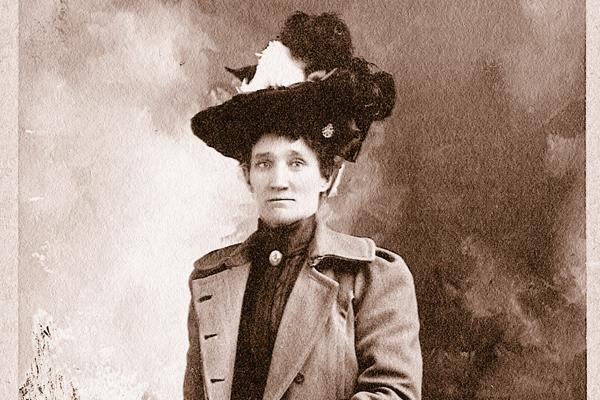 It’s not certain how young Martha and her family survived following her parents’ death. Some legends propose that she was picked up by soldiers and taken to the Wyoming railroad. Regardless of the murky details, somehow or other she moved her family to Wyoming and began working to support her siblings.

Her autobiography, The Autobiography of Calamity Jane, spins stories of teen years spent performing “dangerous missions” and having “reckless” adventures on horseback and in battle with Native Americans, but more likely, Martha Jane spent her teen years as a dancer, cleaner, and prostitute on the Wyoming railroad.

Life On the Wyoming Railroad

In the late 19th century, the settlements surrounding the Wyoming railroad were treacherous places. Since the dawn of the California Gold Rush in 1849, it had been clear that a trans-continental railroad was needed, but plans were stymied by the Civil War. Following the North’s victory, plans for the Union Pacific Railroad were in full swing, and the excitement created by this project, combined with a newfound mining boom, created a feeling of prosperity in the American West.

By age 15, young Martha had separated from her family and was quickly being pulled into the fray of railroad life. After living as a vagrant and completing odd jobs, she wound up in Cheyenne, Wyoming, in 1869. At some point, she was recruited to work as a prostitute in Fort Laramie.

Prostitution was a booming business in the Wild West. Contrary to popular belief, prostitution was actually one of the more lucrative positions a woman could hold at the time. Instead of being bound to one husband, forced to do housework, and left without pay, prostitutes could pick who they had sex with and how they spent their days. It’s not hard to imagine that Calamity Jane, like many prostitutes, found power in the peculiar freedom that the profession offered. Of course, sex workers faced many risks in their own right, like most people on the margins of society.

During her time as a prostitute, Martha Jane developed an interest in traditionally male activities like hunting and exploring. She also learned to smoke, drink, and curse, and somehow or other adopted the nickname “Calamity.”

“With Calamity Jane we have the problem of the hero who performed no heroic deeds. Since we must not destroy our heroes, we manufacture deeds as needed.” —J. Leonard Jennewein

The origins of the name “Calamity Jane” are steeped in lore, like all the details of her life. In her autobiography, which was, of course, full of fabrications, Jane said her name stemmed from the time she saved the life of a military captain named Captain Egan, who named her “Calamity Jane, heroine of the plains.” It seems more likely that Calamity Jane’s hardscrabble life and generally unfortunate luck that inspired the moniker.

In 1876, Calamity Jane had moved to the town that would be integral to her own legend: Deadwood, South Dakota. There she switched over to more masculine lines of work, hauling and lifting supplies to outer camps, and it’s likely that during one of these expeditions she met Wild Bill Hickok.

Some legends say that Calamity met and married Bill Hickock years before and had a child with him, and others contend they only knew each other very briefly. But their story lit a spark that quickly drew the attention of nearby magazine and pamphlet writers. In 1873, the author Edward L. Wheeler featured Jane in a starring role in his Western dime novels, making her into a local legend of sorts. 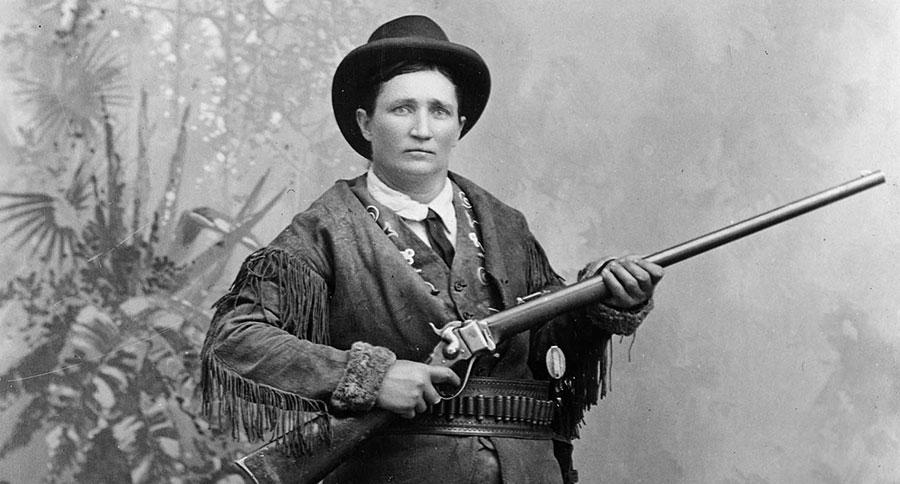 “[The] shoot-em-up, bangbang, fast-draw West is a Hollywood invention. It didn’t exist. And anybody who knows much about the famous characters of the West knows that it didn’t exist” — Larry McMurtry, Buffalo Girls

These novels, combined with Calamity Jane’s autobiography, resulted in the proliferation of quite a few tall tales. Her autobiography says she married Clinton Burke, though there may have been no basis for the story. The tales of her generous, heroic behavior may also be untrue. There are stories of a Calamity Jane dressed as a man, saving smallpox patients and helping miners. These tales, combined with Calamity’s unruly behavior in saloons and in the wild, made her a popular figure in the papers.

Eventually, Jane gravitated from physical labor to performance, her true talent. She was featured in Wild West shows, but was fired for alcoholism and debauchery on set.

Calamity Jane died in a hotel room. Some say she was kicked off a freight train for her drunkenness, and was helped into a hotel in the town of Terry, South Dakota, where locals called a doctor. She died there, most likely of pneumonia, on August 1, 1903 (of that, we’re pretty sure).

Calamity Jane’s legacy is complex, like the legacy of the Wild West itself. Both the woman and the era have persisted in collective memory and in popular culture. Jane’s famous gender-bending appearance, in an era when women were mostly expected to comply with the standards of traditional femininity, presented a kind of escapism and drama that verges on fetishization at times. 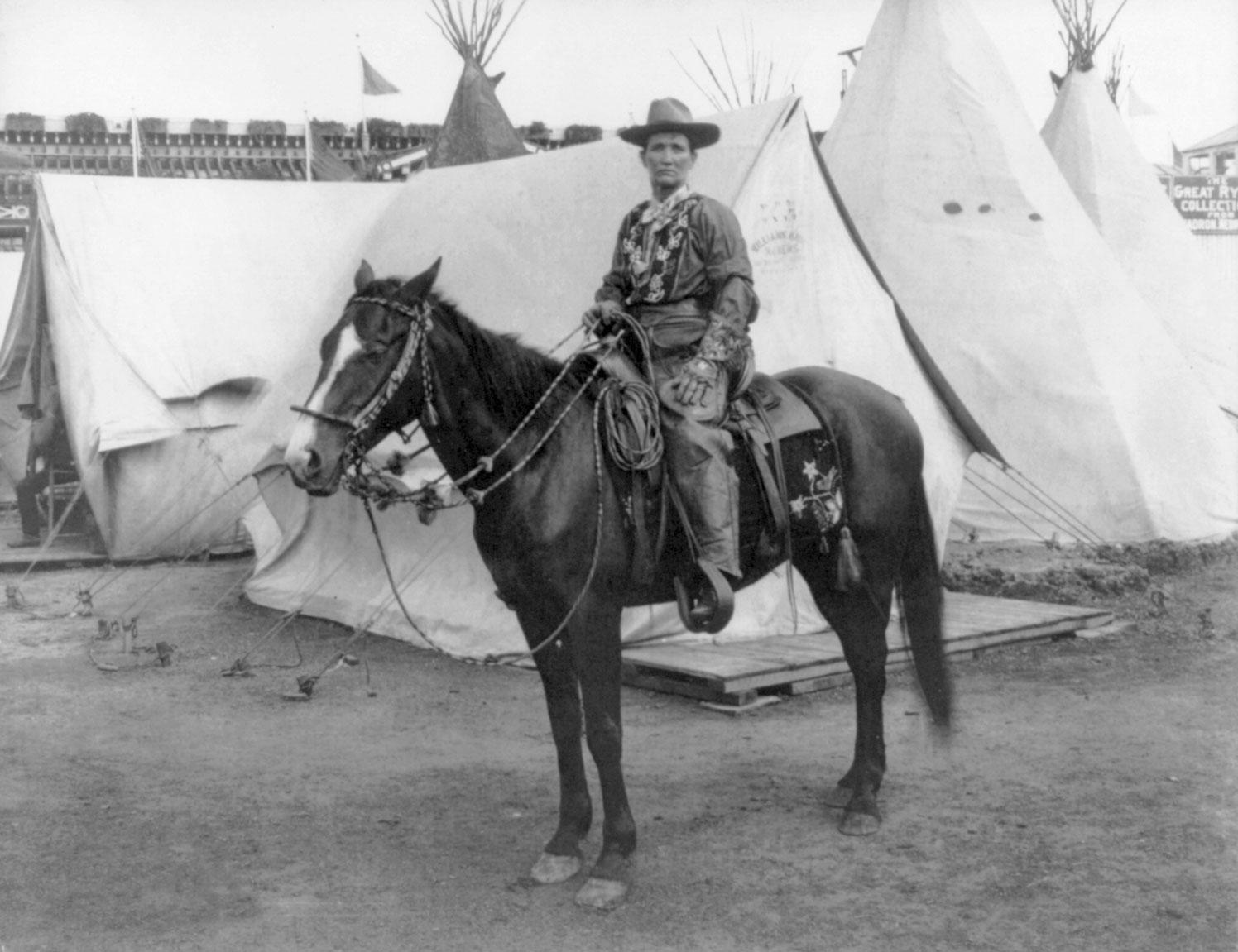 Of course, like the entire story of the American colonization of the West, which of course resulted in the murder of tens of millions of Native Americans, Calamity Jane’s story was mostly built on lies. Like Manifest Destiny, Calamity Jane appeared to be heroic, but she may simply have been a woman with a drinking problem and an incredible imagination.

Can we really separate the facts of who someone was from the legacy they were able to create? The legend that is Calamity Jane and the person known as Martha Jane Canary were likely completely different people, but which one matters – the legend or the reality? Isn’t most of our history just a story we tell ourselves, after all, completely reliant on perspective and circumstance?

Regardless of what you believe, the myths Calamity Jane created have never died. She’s been a highwaywoman, a horse thief, a minister’s daughter, the daughter of a fallen soldier, a compliant wife, a woman who wanted to be a man, a hero, a sinner, a fiction. Yet like the larger myth of America’s grandeur and infallibility and goodness, she lives on.

Edgar Rice Burroughs created Tarzan, one of the most famous characters in fiction, and earned a fortune from his pen. Though much of his work is now dated, his best stories remain…

Western New York was once young America’s Wild West. Its raucous settlement set in motion changes that swept across the continent. Energizing it all was the new Erie Canal,…