Kevin Martin: How did you become a science educator? Though your work is well-known in Great Britain, and to MagellanTV audiences, how would you introduce yourself to a new audience?

Jim Al-Khalili: I followed a very traditional path in academia. After my PhD in theoretical physics in the late 80s, I went into academic research and finally secured a lectureship at the University of Surrey, where I still am today as a Distinguished Professor of physics. I have taught undergraduate students in the Physics Department here for 30 continuous years, covering subjects such as relativity theory, quantum mechanics, and mathematical and computational techniques in science. It was during the mid-’90s when, as a young lecturer, I also discovered my passion for explaining complex scientific ideas to a wider non-scientific audience. That is when I began writing popular science books, getting involved in broadcasting, and giving public talks. I derived as much joy and fulfilment from explaining the science as I did doing it myself. Today, I would say I am still a research scientist even though I have a public face. I think of myself not so much as a “science communicator” but rather as a “scientist who communicates."

Watch Jim Al-Khalili’s Guide to Life, the Universe and Everything on MagellanTV.

Martin: You ask very provocative questions, often in a charmingly simple manner. Were you an inquisitive child? How did your upbringing inspire your love of science?

Al-Khalili: I never thought of myself as being more inquisitive than others, but looking back I guess I was. From a very young age I was thinking about the nature of space and time, the meaning of self and consciousness, and reality. I had a thirst to find out more but often didn’t know where to get the answers I was looking for. So by my teens I knew that I had to study physics if I wanted answers to all the questions I had. I fell in love with physics specifically when I was about 13 or 14. I found the subject easy. To me it was a mix of common sense and puzzle-solving, and so much more exciting than other subjects at school where you just had to remember stuff. That was boring and still is to me. I like to figure stuff out.

Martin: How did you develop the themes for your new series, Jim Al-Khalili’s Guide to Life, the Universe and Everything? Do you consider it an outgrowth or update of your earlier series, or have you tapped new areas of science we haven’t seen before?

Al-Khalili: It’s a synthesis of a lot of material I have covered in previous documentaries going back over a decade and doing two things with it: (a) taking a broader view of what it all means and making connections between different areas of fundamental science, and (b) bringing it up to date with a lot of new ideas and developments that have come to light in science since I made those early programs. 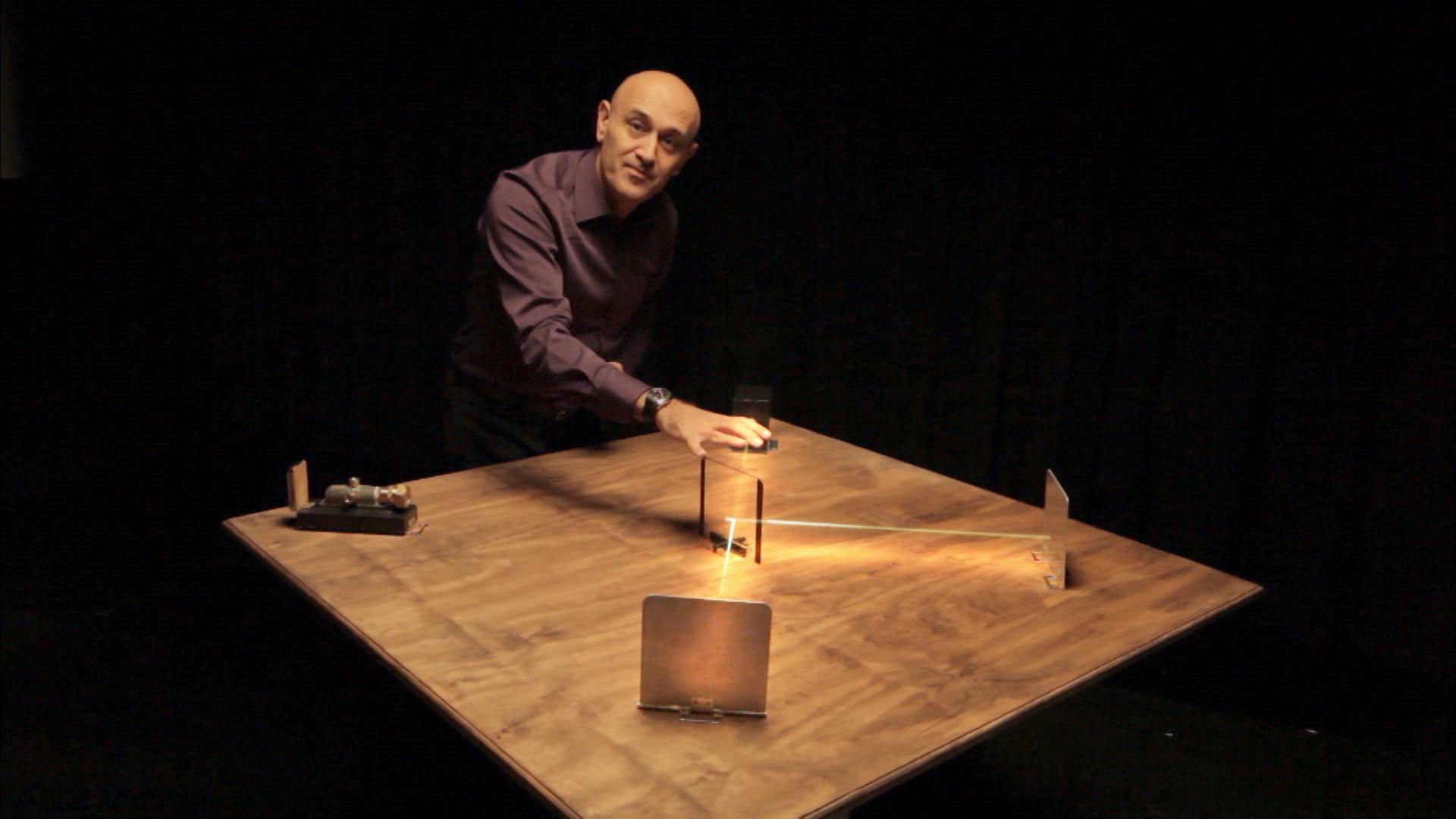 Martin: What’s new in the Universe? What are you excited about now in the fields of physics and, more broadly, science? Are there things you know now that you didn’t know, say, a year ago? Is science moving so quickly that we are changing paradigms on a ramped-up basis?

Al-Khalili: There’s quite a lot that is new. For example, one of the things I talk about in the series that has never been covered before is the results of our recent research into mutations in DNA. This really is hot-off-the-press research that we only published this year and shows the advances my research group has made in understanding the way quantum mechanics plays a role inside living cells – the field of quantum biology. It’s hugely exciting.

Another thing that has changed over the past few years, which I hope is reflected in the films, is that physicists are starting to question some fundamental ideas at the forefront of knowledge in a way that maybe they weren’t so prepared to do in the past, like the nature of time and how it fits into our fundamental equations of physics. In fact, this is now a new area of research for me at Surrey as I am just starting a big research program into the arrow of time, working with physicists, chemists, mathematicians, biologists, and philosophers. I am sure in a few years from now I will have more to say on this fascinating topic, and maybe MagellanTV will be keen for me to make a brand-new documentary with them.

Martin: Would you briefly explain the standard model of particle physics and share your assessment of the controversies surrounding it in the context of the search for a theory of everything? If the standard model is not sufficient, what theory do you think can replace it? And then, of course, is there a way to make this subject less opaque to the non-scientist – like me – who understands such matters at only the most introductory level?

Al-Khalili: The standard model of particle physics is an umbrella term we use to denote everything we know about the microscopic world – that is, the world that operates by the rules of quantum mechanics. So on the one hand we can say it is the sum total of our understanding of the building blocks of the Universe. We can also, in more technical but correct language, say that the standard model is the combination of two mathematical theories that between them describe three of the four fundamental forces of nature (the electromagnetic force and the strong and weak nuclear forces). These two theories are called the electroweak theory and quantum chromodynamics.

What the standard model is missing (inasmuch as it has anything to say on it) is the fourth force: gravity. This is why the standard model of particle physics is not a theory of everything. Gravity comes under a different heading: The Standard Model of Cosmology. The holy grail is to combine these two standard models: in a sense, to unite the largest scales (cosmology) with the tiniest scales (quantum mechanics and particles). So the standard model won’t be replaced – it might be tweaked a little, but more likely it will be subsumed into a grander theory of quantum gravity one day. 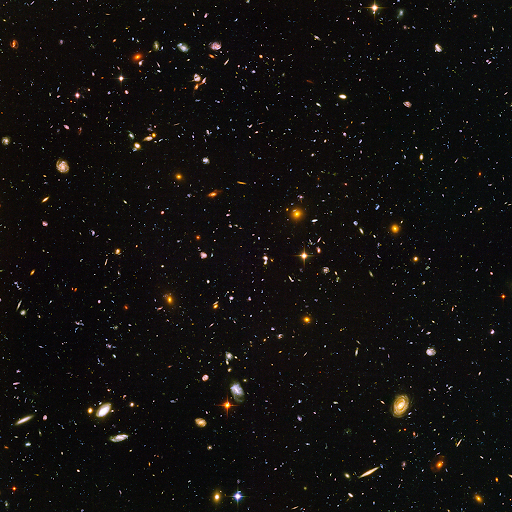 Peer deep into the far reaches of the Universe and ponder the origin of everything with your guide, physicist Jim Al-Khalili. (Image Credit: NASA, ESA, and S. Beckwith (STScI) and the HUDF Team)

Al-Khalili: I know audiences these days, particularly younger generations, like shorter-format packaged information via social media, YouTube, or podcasts. But I still feel that if you really want to immerse yourself in a topic and come away with a bit more than the superficial, then such longer format documentaries still have a place. This doesn’t mean they need to be deep and hard to follow by non-experts, and I hope I have shown in these films that I can take viewers on a journey that they will enjoy and not feel impatient with. Not everyone wants instant gratification. I love Twitter, but not every idea or subject can be reduced to a soundbite or tweet.

“I don’t shy away from trying to blow the viewers’ minds.”

Martin: In your programs, you explain quite complex ideas, yet you’re disarmingly direct and conversational. What is your strategy – or your goal – in reaching your audiences?

Al-Khalili: My strategy has always been two-fold. First and foremost I empathize with my audience. I put myself in their shoes and ask myself what an explanation will mean to them. Does it contain jargon or concepts they will not understand? What will they take away from it? And is that what I intend? Is it too superficial, or is it overly complex? Secondly, I acknowledge that my audience is just as smart as me – it is just that they have not had the benefit of my years of training and experience, so more often than not it is just a case of choosing the right words, examples, and analogies. And so I don’t treat my audience with contempt or condescension. But I should also add that I don’t shy away from trying to blow the viewers’ minds. These ideas are profound. They are mind-blowing and baffling, and if they give the viewer a headache thinking about them then I feel I have succeeded. After all, they give me a headache, so why not share it around?

Martin: The visual demonstrations that you present to embody your scientific points are fantastic, simple yet full of depth. How do you go about fashioning your ideas into entertaining educational experiences?

Al-Khalili: I have to give so much credit to my producers on the programs who have had the imagination and creativity to know what might work and what won’t. These demonstrations are a collaboration, and I cannot take credit for them. Some of them, such as the scene where I describe proton tunnelling in DNA and show a computer animation of atoms and molecules, are very much at the cutting edge of serious research; but they are so visually stunning that with the right words from me to explain what the viewer is looking at, they become a very important tool in communicating what would otherwise be a very dry and difficult subject.

Martin: Has the pandemic caused you to curtail your traveling? Do you have plans for your next project that will have you traveling across the globe?

Al-Khalili: Like everyone else, it has of course affected the way I do my work. But I have been luckier than most. As a theoretical physicist I can conduct all my research from my computer at home. I meet all my research teams regularly over Zoom, I deliver my lectures to students remotely, and I even record my weekly BBC radio show, The Life Scientific, from my study at home. So, no, I have not done any traveling for 18 months. I don’t miss it anywhere near as much as I thought I would, and to be honest I am more looking forward to resuming family holidays than any work related travel. I can now even attend conferences remotely. So my work output hasn’t suffered, but it would still be good when these difficult times are behind us of course.

Martin: Thank you for sharing your time for this interview, Professor Al-Khalili. It was a pleasure to learn about your work and insights into such a fascinating field of study.

Kevin Martin is Senior Writer with MagellanTV. He writes on a wide variety of topics, including outer space, the fine arts, and history. He has had a long career as a journalist and communications specialist with both nonprofit and for-profit organizations. He resides in Glendale, California.

Have you met Jim al-Khalili? (You’re about to.) He is a UK-based theoretical physicist and also a talented interpreter of technical science for people like us – sort of a…