Gaming has become a significant part of today’s society – from online multi-playing experiences to single-player role playing games (RPG). No matter the type, billions of hours of gameplay are being logged around the world each week. But is all this gaming good for your mind? In many cases, the answer is yes. New findings suggest that playing video games can make a positive impact on players’ mental states, and four main areas – creativity, mental health, social skills, and cognition – may actually improve with frequent gaming.

The influence of video games on today’s media-driven culture has become so pervasive that reasonable people might think there are serious problems with the phenomenon. And perhaps in some cases that is true. As the documentary Gaming: The Digital Revolution points out, video games have directly influenced cultural trends around the globe, and people worldwide spend billions of hours on gameplay each week. With all that gaming, it only makes sense that some people will overdo it, or that individuals with certain personality types or mental health issues might be vulnerable to addictive behavior.

But for most of us, playing video games is a perfectly enjoyable, healthy, and even sociable pastime. Think of it this way: Online playing unites people from all over. From themed events and conventions to bars popping up with arcades, gaming has become an interactive and social event. It has even become a spectator sport, with the popularization of games like League of Legends. Gaming has become so popular, in fact, that recent trends show participation in video games has become the fastest growing form of recreation and the world’s largest entertainment medium, with annual revenues surpassing those of Hollywood!

I’m not surprised by these trends. After all, who doesn’t love a good round of Pac Man? But wouldn’t it be great if the video games we enjoy playing benefited our cognition and other mental processes? According to recent findings, they might just be doing that.

How many gamers are there? According to Pew Research Center, 43% of U.S. adults say they often or sometimes play video games, while 97% of teen boys and 83% of girls play on some device. Those under 50 years old are twice as likely as those over 50 to play the games.

It will come as no shock to hear that video games affect players’ mental states, but you may be impressed to hear how gaming can positively impact mental growth and development. In fact, video gameplay can have a healthy effect on three of the main areas of basic psychological needs: competence, autonomy, and relatedness. In addition to improving skills centered on movement, problem solving, memory, and social connection, it’s now believed that video games can also notably enhance a player’s motivation and drive – often influencing their dreams and goals, both personally and professionally.

In addition to helping with basic psychological needs, gaming has also been found to enhance four specific areas of cognitive and mental functioning – creativity, mental health, social skills, and cognition. Let’s explore how these four areas are affected.

Customizing characters, building expansive kingdoms, and exploring fantastic and whimsical ideas – with features like these, video games can promote creativity in players. In fact, according to research conducted by Michigan State University scholars, the more kids played video games, the more creative they were in tasks like drawing and writing stories. The surprising part about it? Children didn’t have to engage in role-playing, puzzle, or art-focused games in order to reap the benefits. Creativity was found to be enhanced by playing video games of any kind – including violent ones.

According to a poll conducted by Qutee, a data-led discussion platform organized to give gamers a voice, 33% said that video game usage inspired future careers in creative areas including art and science.

Studies such as Michigan State’s are shaping how future video games are designed, optimizing the games to enhance the development of creativity in players of all ages.

While testing the correlation between gameplay and positive adolescent development, players scored more favorably in relation to positive mental health and self-concept than their non-gaming peers. But don’t worry, you don’t have to commit to long hours of continuous playing in order to benefit. New technology – such as smartphones – supports the growing popularization of gaming by providing convenient access to players through apps, delivered right into the hands of every player. Simple, accessible, and quick games like Candy Crush or Angry Birds can improve players’ moods by promoting relaxation and decreasing anxiety.

Through gameplay, positive and tranquil mental states are promoted, and players also gain increased confidence and motivation. Video games are believed to improve goal-setting abilities, and, because most games are designed to reward and encourage success, kids who play are not afraid to take risks – or even fail – in order to achieve their goals. This ultimately promotes positive reinforcement and internal motivation. Emotional resilience is cultivated by learning to cope with ongoing failures in games.

“Kids and teens don’t know how to be social anymore. They’re always just sitting with their devices, playing video games.”

Okay, I know I’m not the only one who has heard comments like that before – but in today’s gaming society, this couldn’t be more wrong. Sitting inside and playing video games may not appear to be socially engaging, but often when an individual is playing a game, he or she is actually online with friends and countless others around the world. The American Psychological Association found that “more than 70 percent of gamers play with a friend and millions of people worldwide participate in massive virtual worlds through video games.” While virtual communication differs from face-to-face interaction, multiplayer games have become virtual communities that help enrich social skills and enhance teamwork.

Results of an online poll conducted by Qutee found that about two-thirds of gamers have made up to five friends through gameplay, and another 37% report even more connections were made.

Even though online, multiplayer platforms highlight these benefits, single-player games can have the same effect. While some games are played alone, the culture and fan base that are created around them foster social skills. Online forums and discussions, conventions, and competitions bring single players into a realm where others share their interests. Overall, video games – whether single- or multi-player – improve and promote connections to friends and other people.

Next time someone says, “Don’t play so many video games! It’ll melt your brain,” you might just want to brush it off. Contrary to such beliefs, video gaming does the complete opposite of turning your mind into mush – it makes it stronger.

According to a 2013 meta-analysis by the American Psychological Association (APA), gameplay may actually enhance a range of cognitive skills and improve abilities like spatial navigation, reasoning, memory, and perception. And this isn’t just the case for logic- and puzzle-based games. This next finding might shock you: The APA points out that this is particularly true when it comes to violent video games, noting that playing shooter games was found to improve a player’s capacity to perceive objects in three dimensions to the same extent as an academic course would.

It’s amazing to think that playing video games can improve cognitive performance . . . and the benefits are plentiful! Gaming is known to sharpen hand-eye coordination, improve motor skills and memory, and heighten concentration – after all, these skills are required and exercised during the course of gameplay. In addition, the APA meta-analysis indicates that playing video games improves problem-solving techniques. When players are encouraged to approach situations strategically during gameplay, their critical thinking and complex problem-solving capabilities are enhanced – the benefits of which can improve academic, professional, and personal prospects for the individual.

Can playing video games help you with your homework? According to a long-term study published in 2013, this may the case. The study, which evaluated adolescent video gameplay, found that the more children reported playing strategy and role-playing games, the more their school grades improved the following year.

While a lot of research has been conducted in order to understand the positive effects video games have on adolescents, cognitive functioning doesn’t improve just for younger players. A study conducted on the cognitive effects of video games on old people found that elderly participants who used video games exhibited a slowing of cognitive deterioration. It’s exciting to think that video games could be used to improve treatment and understanding of conditions such as Alzheimer’s disease and dementia.

The Future of Gaming and Mental Health

In a time of increasing participation in the world of video games, it’s useful to learn about the benefits gaming can have for us – but it’s also important to evaluate the risks excess gaming has for individual players. For example, gaming may be problematic for people with certain personality types and mental issues, such as those who struggle with addiction.

These concerns were highlighted when the World Health Organization (WHO) recently designated “gaming disorder” as a mental health condition, characterized by “a pattern of persistent or recurrent gaming behavior.” But the issue is widely debated, and many respected health and psychology professionals and organizations are cautious when it comes to categorizing gaming as a new addiction or epidemic.

In a recent New York Times article, Can You Really Be Addicted to Video Games?,
it’s pointed out that “about 60 percent of gamers have neglected sleep to keep playing,
and about 40 percent have missed a meal. Somewhere around 20 percent have skipped a shower.”

Currently, the American Psychiatric Association does not include gaming disorder or addiction in the Diagnostic and Statistical Manual of Mental Disorders, but the organization does note that gaming disorders may be a problem in the future and should be monitored. Other mental health experts are also hesitant to label excessive gameplay as an addiction, noting that problem behaviors may be caused by underlying issues such as anxiety and depression rather than true “addiction.” 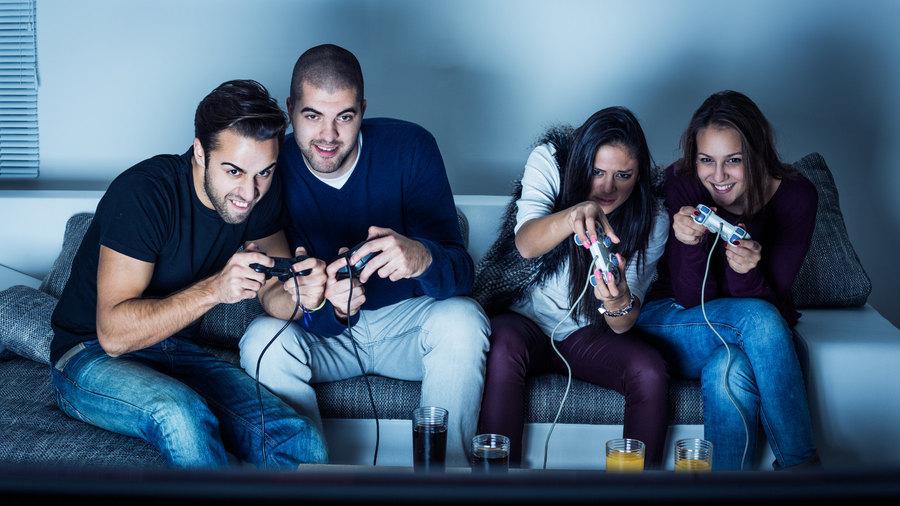 Given the concerns of some mental health professionals about gaming behavior, you might be surprised to learn that gaming is also being used to treat mental disorders. Some developers are even shifting focus towards creating video games specifically designed to change underlying attitudinal, behavioral, and emotional processes of patients with impulse-related disorders. Additionally, gaming can be a successful form of treatment for conditions such as schizophrenia, asthma, and motor rehabilitation.

In any case, as we’ve seen, there is much good news associated with video games. Whether you’re playing in order to sharpen your mind or just want to blow off steam after a long day at work – just remember to have fun.

Music has long been understood to have mysterious properties to ease troubled bodies and minds. Starting in the early ‘90s, researchers were able to see in real time what melody…

With $304 million lost due to dating scams in 2020, it’s increasingly common to be fooled by fraud on the Internet. Due to a large number of “catfish” on the Web, it’s important…

Nerds may be introspective but that doesn’t mean they won’t make daring thieves. Black hat hackers use their computer knowledge to steal credit card numbers. Surprisingly they…