The shield volcano gets its name from its summit being largely flat and tilted, with a raised section in the center, appearing to some as a warrior’s shield. There are shield volcanoes in several parts of the world, including Iceland and the Galápagos Islands, but the largest and most massive of all shield volcanoes actually form the archipelago of Hawai‘i. Come on a thrill ride that starts deep beneath the Earth’s surface to see the unique way shield volcanoes erupt.

A cinder cone volcano has steep walls and violent eruptions of lava, as well as pyroclastic material that is thrown into the air and adds to the cinder cone’s rocky, jagged appearance. 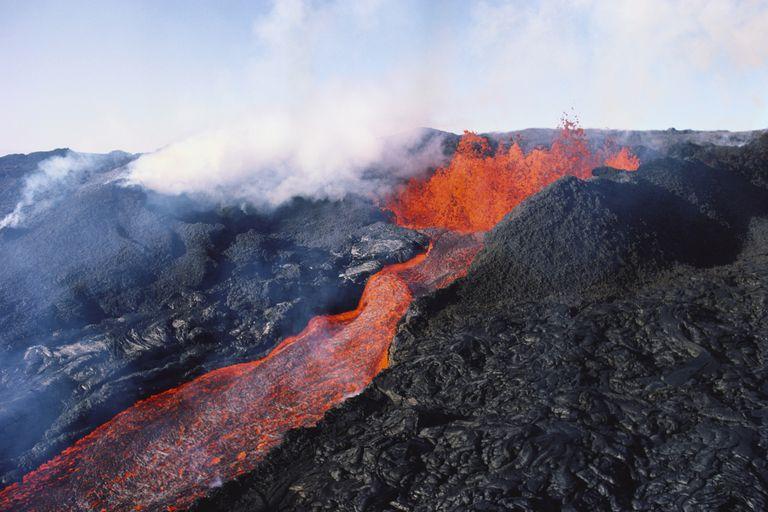 Stratovolcanoes, also called composites, are like cinder cone volcanoes on steroids – they are taller, steeper, and more dangerous than other types of volcanoes due to the release of toxic gases. Many of the most iconic volcanoes in the world are stratovolcanoes, including Mount St. Helens in the U.S., Mount Fuji in Japan, Mount Kilimanjaro in Tanzania, and Italy’s notoriously destructive Mount Vesuvius.

Fact 1: Cinder cones get their name from their characteristic cone-like shape, which is formed by volcanic ash and cinders. Stratovolcanoes are made up of alternating layers – or strata – of compressed rock, volcanic ash, large stones and boulders, and hardened lava flow.

How Do Shield Volcanoes Form?

Would you like to take a trip on the lava train, traveling from below the earth straight up 30,000 feet or more, then spreading out down the surface of a shield volcano? Let’s go on this impossible journey at 2,500 degrees Fahrenheit. Hot stuff!

We start deep below the bottom of the ocean. Magma is created with the melting of underground rock, formed of basalt in the vast furnace of the mantle. Pockets of superheated magma well up from beneath the crust, causing the floor of the ocean to bulge upward.

Fact 2: Basalt, a lightweight porous rock in its solid form, is the primary compound forming the volcanic flow of a shield volcano. Because of its relative lightness and low viscosity, it flows quickly.

The swift upward movement of the magma weakens the stretched terrain under its bulge, eventually creating cracks or fissures through which magma breaks, eventually forming a vent. At the point that magma erupts, it’s called lava. 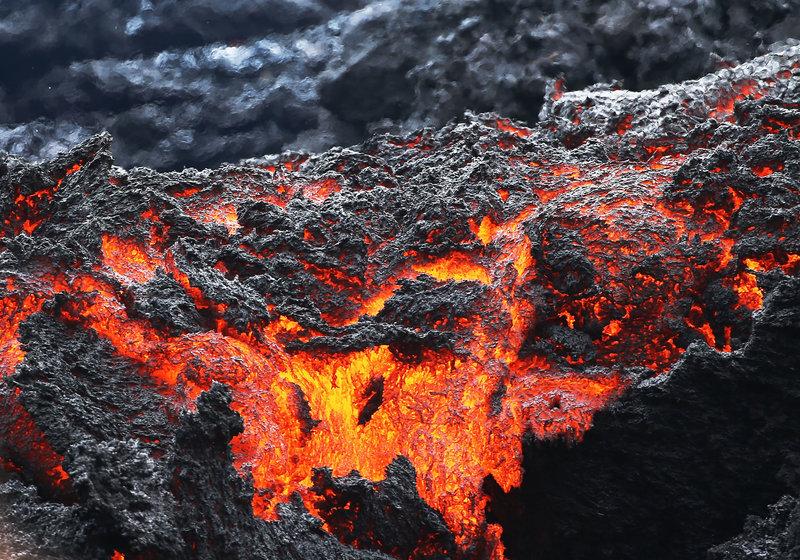 Since this is all happening undersea, the weight and pressure of the water keep the heavier mass of the lava close to the seafloor. Runny lava flows out of the fissures under water, cooling and hardening quickly. Consecutive releases of flowing lava form layers upon which a mountain begins to form.

Over hundreds of thousands of years, the accumulation of layers of hardened lava causes the mountain to rise, and eventually it will emerge from the sea under which it lies and become a volcanic island. Basaltic lava runs above the ocean’s surface, causing the acreage of the island to grow quickly, building low, sloped mountains.

Over the long life of an active shield volcano, so much lava is pushed out that it forms fields where lava flows horizontally in all directions. This is when lava tubes are created, carrying large volumes of lava far across the new landscape and depositing the hot liquid mass far away, adding to the size of the volcano’s footprint.

Feel the need to get up close and personal with an active volcano? Join Volcano Hunters for one of their adventures.

Shield volcanoes pop up in various spots around the world, and have distinctive features wherever they appear.

Fact 4: There are volcanoes on other planets, and many of them, such as ones discovered on Mars, Venus, and Jupiter’s moon, Io, are shield volcanoes. Low gravity is a factor in lower eruptive activity and symmetrical lava flows.

Another way shield volcanoes differ from other volcano types is the distinctive way that they erupt. Although we use the world erupt to describe the flow of lava from the top of a volcano, it’s not precisely descriptive of how lava is released from a shield volcano. As opposed to the violent, shattering type of explosions that cinder cap and stratovolcanoes display, in shield volcanoes the flow is effusive, not explosive. The release is more of a push than a pop! 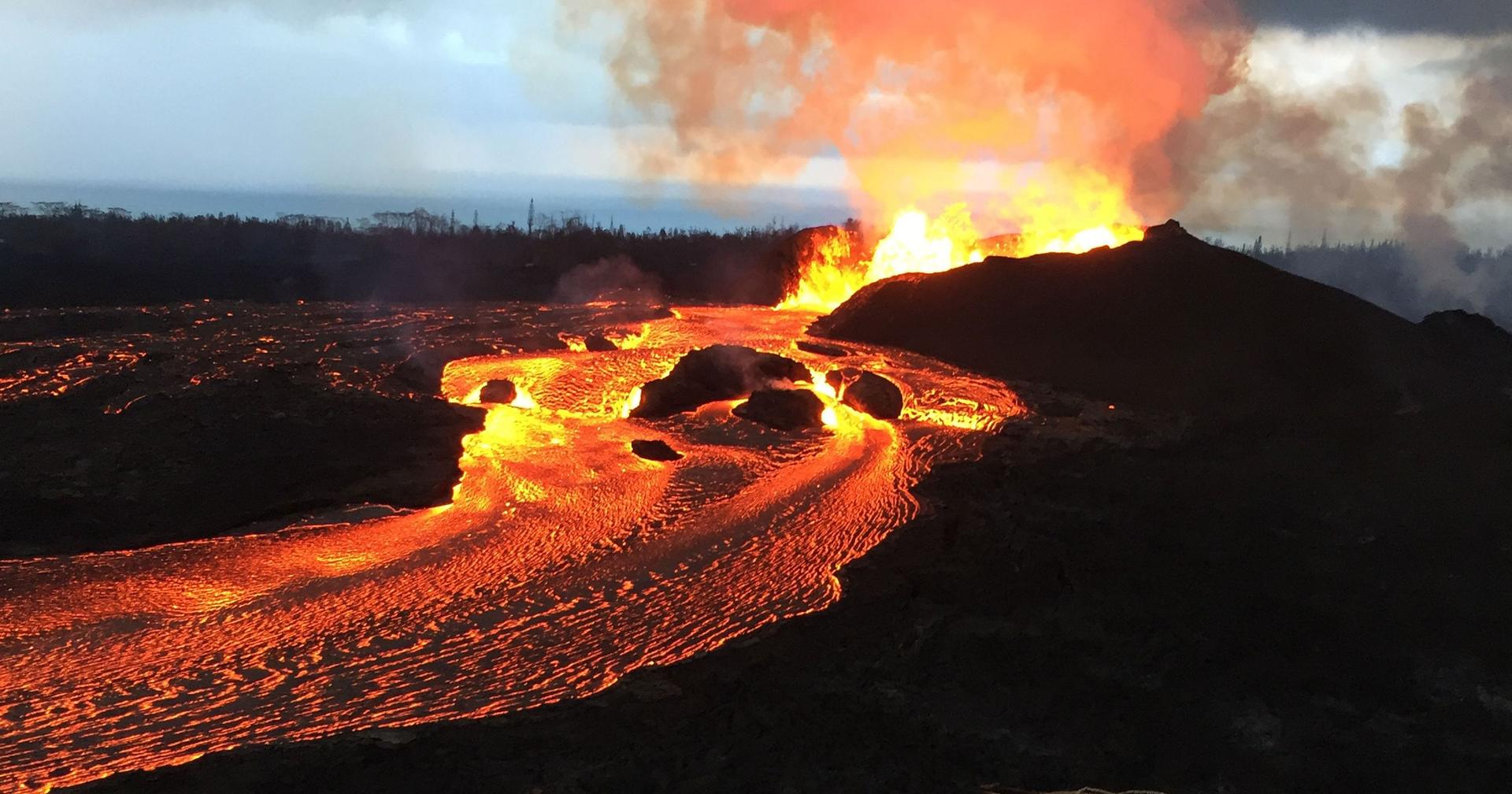 One more distinctive characteristic of shield volcanoes is that lava flows not only up through the summit but also through a network of fractures in the structure. Because of this, eruptions of such volcanoes differ from the cartoonish image most of us carry in our minds, perhaps from watching a few too many episodes of The Flintstones.

When lava flows from a shield volcano, it moves more quickly than other types of lava because of its viscosity. This refers to the “thickness,” or heaviness, of the liquified substance. Since there is little rock in the shield lava flow, as compared with other volcano types, it moves at a faster rate, which is caused by its low viscosity.

This relatively fast flow of volcanic ash and lava can cause a lava tube to form, which permits the volcano’s lava to flow even faster, unimpeded, along the easiest downward direction. The ejected material just pushes in every direction, with gravity pulling it down until it pools at its lowest altitude. This process adds to the shape and size of the volcano and, if it is surrounded by water (as in Hawai’i), new and habitable land is formed.

Fact 5: A shield volcano’s lava tubes are cave-like structures formed by hardening lava. Lava forms an insulating layer that allows the hot lava to flow fast and far from the center of the volcano.

In fact, there would be no Hawai‘i without shield volcanoes, as their serial appearance along the Hawaiian archipelago literally created its islands. For example, Mauna Loa, a shield volcano located on the “Big Island” of Hawai‘i, is the world’s largest active volcano. The fabled volcano accounts for more than 50 percent of the surface of the Big Island.

Most commonly, shield volcanoes form during a single long-term eruption that can last decades, centuries, millennia, or more. For example, Mauna Loa has been active for 700,000 years, though its most recent eruption began in 1984.

Fact 6: A vast magma chamber underneath the center of a shield volcano releases its viscous material through a conduit called a dike, a vein-like structure that allows lava to be pushed upward through other material and be released at the summit.

Incidentally, the world’s tallest mountain is not Mount Everest – it’s a shield volcano, Mauna Kea, in Hawai‘i. It achieves this record not by its height above sea level, which is only about 14,000 feet, but by the enormous height of its underwater portion. There’s nearly another 20,000 feet of the mountain underwater, putting the total height of the mountain about one mile taller than Everest.

Shield Volcanoes and Seamounts: The Birth of Lo‘ihi Seamount

Volcanoes can be among the oldest “active” geological features on Earth. Some, like Mauna Kea, are over a million years old. And yet there are volcanoes being born today; even now, off the southwest coast of the island of Hawai‘i is an underwater plateau belonging to the state’s youngest volcano, called the Lo‘ihi seamount. Sometime within the next several thousand years, the underwater mountain is likely to break the surface, eventually forming another island or conjoining with the island of Hawai‘i.

According to Geology.com, Lo‘ihi is 10,100 feet high. But that’s a relative height – it’s all underwater! And it is definitely growing. In fact, it’s only 3,100 feet below the surface of the ocean. So, future amateur volcanologists and oceanographers will be able to explore the islands eventually created by this ongoing geological event.

The Allure of Hawai‘i’s Shield Volcanoes

As we’ve seen, shield volcanoes are but one type of volcano. But these relatively squat, wide and voluminous natural structures are unique in their own right, from the type of basaltic lava they produce to the way it’s created, through effusion rather than explosion.

Should you ever make it to Hawai‘i, or if you have the pleasure of residing or having visited there, take a look at these marvelous creatures of stone, rock, and ash. You won’t be able to ride a lava flow, but just try not to be impressed.

What are tornadoes, and do they only occur in North America? Let’s look at how and where twisters form, how powerful they can become, and why “Tornado Alley” is where the action…

5 Great Resources for Tracking the Latest Earthquakes (In Real-Time)

Think you may have just felt an earthquake, or know for certain that you did? You’ll want quick information on the where and when of recent temblor activity. Here are some…