[Editor’s Note: This article was originally published in February 2019.]

The role of women in the military has been debated for centuries, but the Red Army of the former Soviet Union needed every soldier it could find to defend against the German invasion of 1941. One sniper, Lyudmila Pavlichenko, was so skilled at her lethal assignment that she became known as Lady Death. She was feared by the enemy, and revered by her comrades. She also became a prime example of a successful woman soldier and was an inspiration to women warriors of the future, including in the U.S.

Smoke rose off the ground like a gateway to Hell. The grey sky bled into the grey landscape, colored only by the bullets that had rained down. The dirt-caked hands of German soldiers clawed at trenches as they scrambled to take cover and test their luck for one more day. Silence fell, covering the men like a blanket. But something pierced the barrier. A crisp, single shot rang out, and a cry quickly followed. The troops carefully looked out, searching for the source of the shot. They didn’t actually want to find it, though. Why would they? Finding it meant they wouldn’t be going home.

In the distance, out of view, a figure rose and tallied another mark to her list. She floated off, camouflaged from searching eyes. She was Lady Death, and she loomed over the enemy like a demonic angel. But Lady Death wasn’t an angel, and she wasn’t a demon.

Who was this mysterious figure? Was she fact, or was she fiction? Lady Death may seem like a character from a haunting tale – a warning to enemies, or a nationalistic bedtime story. But Lady Death was real. Her name was Lyudmila Pavlichenko, and she didn’t just battle enemies. She vanquished gender norms.

Lyudmila provided a powerful example of how effective a woman could be on the battlefield, but the policies of the U.S. military were dramatically different from those of the Soviet Union’s Red Army. In the American armed forces, women were generally restricted to “behind the lines” duties, such as nursing and clerical jobs. A few gained experience as pilots by ferrying aircraft from one base to another, but dropping bombs and shooting down fighters was reserved for men. An American equivalent to Lyudmila Pavlichenko was unthinkable.

The war did, however, open up certain other opportunities for women, especially in the civilian  workforce. And they were the targets of wildly successful propaganda campaigns – such as the famous “Rosie the Riveter” posters – that influenced them to trade in their homemaker aprons for trousers and work boots as they stepped in to fill assembly line jobs in factories and defense plants. 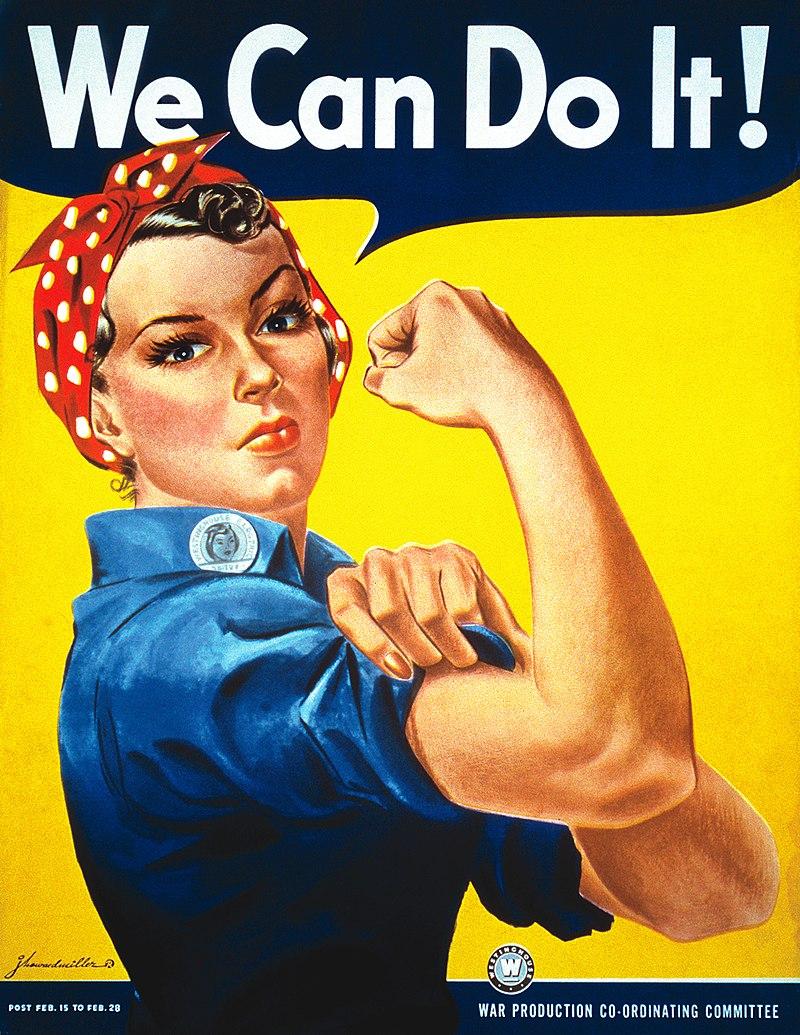 While American women struggled to find equality in the military during World War II, the situation in the Soviet Union was different. In contrast to the American policy of keeping women “out of harm’s way,” women in the Soviet Republic of Ukraine were recruited for combat duty in the Red Army. In fact, as many as 2,000 Ukrainian women became snipers whose role was to kill German soldiers who had invaded in June 1941.

The U.S. military has historically resisted or restricted women in uniform. Until recent years, they were mostly limited to support duties behind the lines. In 2013, certain combat roles were opened to women.

As we learn from Lyudmila Pavlichenko’s empowering story, beautifully told in the historical drama Battle for Sevastopol, she was allowed to join her male comrades on the battlefield. And she wasn’t alone. But who was she really, and why did this elusive “Lady Death” stand out from the rest?

From early in her life, Lyudmila had deep ties to the Soviet military – her father served in both the Russian Revolution and Civil War. She was competitive and driven in everything she did, and she often found herself competing with the boys in her school – joining in their games and, in her own words, not allowing herself “to be outdone by boys in anything.” But her rowdy behavior did not hinder her educational development, and her ambition helped her finish school a year-and-a-half before her classmates. As a well-rounded teenager, she earned her Marksman certificate and Voroshilov Sharpshooter badge from her time training at OSOAVIAKhIM – a program for non-military citizens to prepare for future war.

After Lyudmila finished her primary schooling, she was admitted to Kiev University. Her mother was a professor of English, which, no doubt, laid the foundation for her academic interests. Though competitive and committed, the two sides of her personality were superficially contradictory. On one hand, she was rowdy and boisterous, tomboy-like and interested in following in her father’s footsteps. On the other, Lyudmila was bookish and dedicated to perfecting her studies. But she embodied both the Yin and Yang in herself – the power and fierce drive handed down from her father, and the studious and inquisitive nature inherited from her mother. 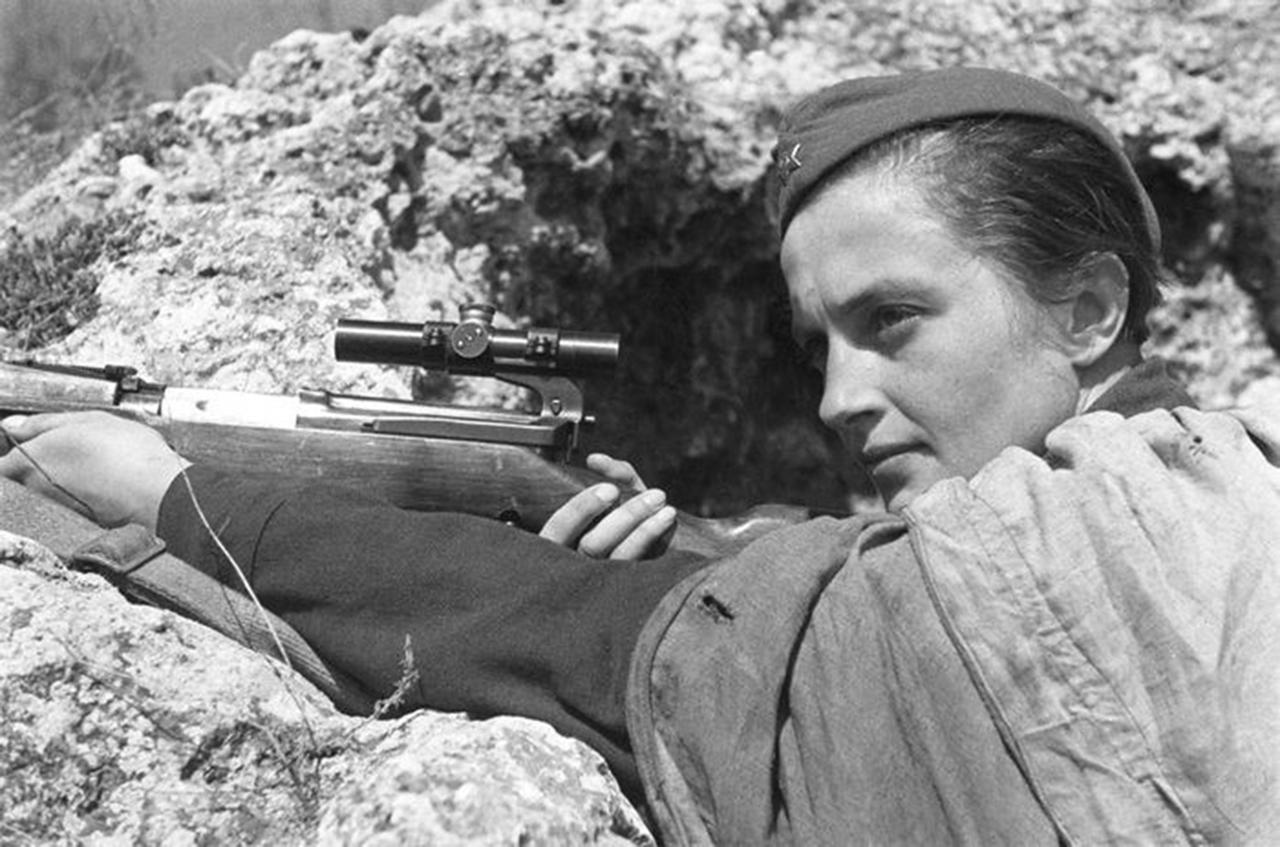 Lyudmila was studying history at the university when she heard the news that Germany had invaded the Soviet Union. Equipped with her previous training and her family’s military background, she marched down to the recruiting office to enlist in the Red Army. The recruiter, typically skeptical of women in uniform, doubted her fitness for combat and suggested she would be better suited for nursing or office work. Lyudmila, steadfast in her determination, changed his mind by showing him her previous training and awards.

While Lyudmila was but one of the 2,000 women recruited as snipers, her skills were virtually unique. She was made a private in the Red Army and assigned to a subsection of the 25th Chapayev Rifle Division. Demonstrating unparalleled skills with her weapon, she was then assigned to the 2nd Company sniper platoon.

Lyudmila’s exploits on the battlefield were so impressive that she quickly won the respect of her fellow soldiers – and, perhaps even more important to the war effort, the affection of her country. She was nicknamed Lady Death (a harsh but complimentary moniker), which was perfect for propaganda purposes. In fact, with such a colorful nickname, she was believed by many to be a mythic figure created by some imaginative Soviet propagandist.

However, Lyudmila’s story was very much true. During the single year she served, she sniped 309 Axis soldiers – 36 of whom were themselves German snipers. Some believe her unconfirmed number of kills might actually have been closer to 500. (Now you can see how she got her nickname.) According to legend, Lyudmila went up against a prolific German sniper credited with over 500 confirmed kills, but the German was no match for Lady Death and joined her rapidly growing list of victims.

Unfortunately, even a legendary woman warrior like Lyudmila continued to battle gender norms. In one interview, one reporter rather patronizingly asked if she was allowed to wear makeup during her service. Quick thinking, she responded: “There is no rule against it … but who has time to think of her shiny nose when a battle is going on?”

Despite her success, Lyudmila’s career on the front line ended in June 1942. During the bloody battle for the port city of Sevastopol, she was injured and evacuated. After all, the country (and the Soviet propaganda machine) didn’t want their hero to die. Sadly, though her body recovered, her mind did not. The trauma she suffered during her relatively brief service on the battlefield left her with post-traumatic stress disorder – just like many soldiers throughout history.

The Legacy of the Ukrainian Heroine

To this day, Lyudmila Pavlichenko holds the record for the most confirmed kills of any female sniper in history – despite serving for only one year. She led an impressive life – excelling at everything she did and inspiring women (and men) around the world. She even became close friends with First Lady Eleanor Roosevelt. Lyudmila traveled extensively abroad in support of the war effort, and became the muse for Woody Guthrie’s song “Miss Pavlichenko.” Her service, spunk, and courage has been a beacon to women wishing to serve in their countries’ military services.

Progress in the U.S. armed forces was gradual, to put it kindly, but the generals and government policymakers eventually saw the light. Today, approximately 200,000 women are on active duty in the military, many of them in combat roles such as fighter pilots, submariners, and infantry soldiers. Recently, a woman became the first to complete the initial round of training on her quest to become an elite U.S. Army Green Beret. I have to believe that Lyudmila would be proudly rooting for her to succeed.

Everyone knows about Amelia Earhart, but can you name another notable female pilot? Some of the great pioneers of aviation were women, and the story of a group of women who were…

Andrew Carnegie was the world's richest man, hated by many for his opposition to organized labor. But in his last years, he gave away most of his fortune to benefit working…