Overestimating one's own power while underestimating an opponent’s strength has been the downfall of empires. Russia’s Czar Nicholas II did not learn this lesson in 1905. Will Putin make the same mistake?

Russia’s appalling invasion of Ukraine in February 2022 recalled for many the Soviet Union’s mid-20th Century armed incursions to end popular revolts in Hungary, in 1956, and Czechoslovakia, in 1968. A 1979 sweep into Afghanistan was meant to protect its communist government from a Muslim insurgency that never ended. These apparent early “victories” over mainly defenseless people served to extend Soviet power in a Cold War that, by 1991, Russia was finally too exhausted to win.

Russia’s supreme leader, Vladimir Putin, clearly modeled his plans for Ukraine on these Soviet military strikes. But the shambolic execution of what was supposed to be a lightning Russian assault calls to mind an earlier campaign. In 1905, overconfident Russian military aggression in the Far East led to the colonial Russo-Japanese War – and the eventual downfall of the Romanov dynasty of Czar Nicholas II.

A tyrant surrounded by a small cadre of royalist sycophants, Nicholas is a closer fit for Russia’s de facto Czar Vladimir than any Soviet strongman. The overconfident Romanov expansionism, and the myth of Russian greatness that fueled it, ended in unforeseen disaster.

Apparently, Putin didn’t learn anything from that fatal lesson in colonial belligerence. In fact, the main lesson of History may well be that few really learn History’s lessons.

By 1904, Russian Imperial designs in the Far East were considered secure at the czar’s St. Petersburg court. China's 1901 Boxer Rebellion, a spontaneous uprising against multiple colonial powers, prompted imperialist nations, including Russia, England, France, Germany, and the United States, to send troops to “protect” their business and territorial interests across the crippled Chinese Empire.

For Russia, that mainly meant the occupation of the Yellow Sea port of Lushun, which they called Port Arthur, slightly west of the Korean Peninsula. This fulfilled a long-standing czarist dream of a warm-water port on the Pacific complementing Russia’s Siberian naval station at Vladivostok that was icebound during the Arctic winter. 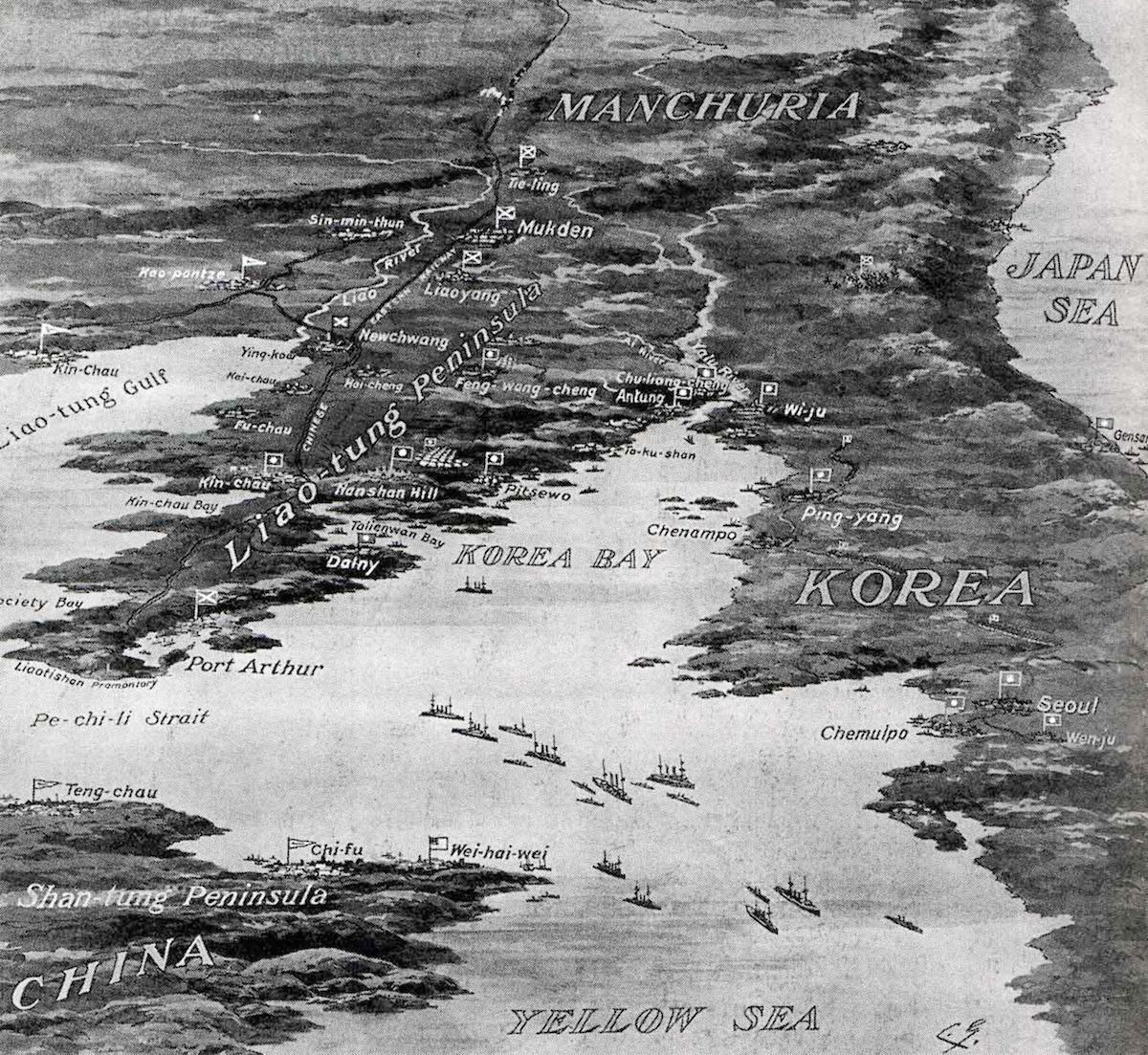 1904 map showing Port Arthur, at bottom left, and Mukden to its north and east. (Source: Wikipedia)

However, the newly powerful Empire of Japan had its own colonial designs on the surrounding China/Korea mainland. Though Japanese diplomats attempted to work out a compromise between the two powers, a feckless, arrogant, and racist Russian czar, arguably the most incompetent person ever to lead a European nation, belittled the Japanese overtures. The possibility of war was completely dismissed by a Russian high command that considered the Asian nation to be a puny, easily-defeated adversary, no match for their nation’s military might. Czarist propaganda promoted this notion of easy victory to the Russian people.

And so Russia blundered into a catastrophic war that would lead to two revolutions, the second one costing Czar Nicholas his throne, and his life, 12 years later.

What was wrong with Russia's position at Port Arthur? Well: 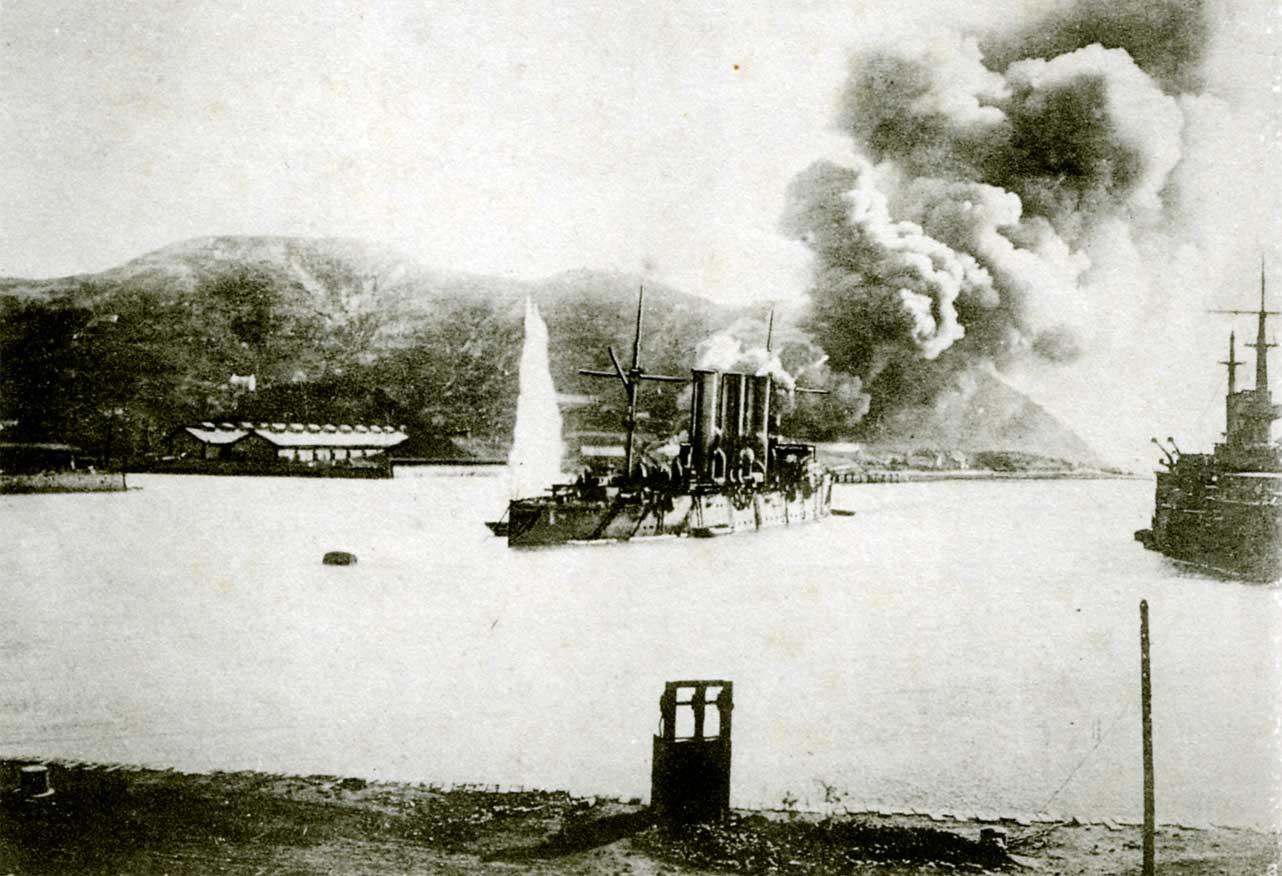 And, spoiler alert, the Japanese army did indeed cut off Port Arthur and occupied the heights following a surprise attack on February 9, 1904. Japanese troops first drove the Russian army from Korea’s northern border before settling into a siege of the port that April. The Russian fleet, raked by artillery fire from land and blocked by floating mines and a detachment of superior Japanese warships, commanded by Admiral Togo, waiting outside the harbor, was trapped. Shortly after Japanese troops occupied Port Arthur’s heights in January 1905, the town’s commander surrendered.

The ensuing Battle of Mukden in Manchuria that February, with over 600,000 troops clashing along a 90-mile front, remains one of the largest military engagements in history. Though both sides suffered terrible losses, and neither could claim a clear victory, the Russian withdrawal ended the possibility of a counterattack, while the Japanese still held their position around Korea.

But Port Arthur’s fall, and the costly stalemate at Mukden, was just the start of Czar Nicholas’s woes.

In February 1904, the Russian high command had ordered the Imperial Baltic fleet to sail the approximately 19,000 miles around Europe, Africa, across the Indian Ocean, and Indochina Sea to relieve Port Arthur and teach the Japanese a lesson.

As luck would have it, Port Arthur fell just as the Russian fleet, a varied collection of eight modern battleships surrounded by about two dozen aging cruisers and repurposed merchant vessels (along with, believe it or not, two former yachts outfitted with cannons) passed India. This haphazard flotilla was manned by poorly-trained conscripts, and mainly commanded by incompetent officers who owed their commissions to connections at the royal court. Absolutely no match for the faster Japanese vessels equipped with more powerful guns, Russia's so-called Second Pacific Squadron was utterly annihilated in under two days of fighting in May after it entered the Straits of Tsushima, between Japan and the Korean mainland.

One Russian ship managed to reach Vladivostok; three others surrendered to the U.S. Navy in the Philippines. Every other Russian vessel was sunk or surrendered, with a loss of over 5,000 men. The Japanese lost three torpedo boats and 117 dead.

The Russo-Japanese War was over, and Russia lost. Czar Nicholas now faced the Revolution of 1905, a multifaceted uprising that involved an open revolt in the armed forces, widespread labor strikes, and violent demonstrations by parties across the political spectrum. Furious at the unexpected loss of Russian honor, these groups demanded long-delayed constitutional liberties and land reform. The czar’s ministers met the crisis with a mix of mainly insincere political compromises – including a representative legislature and the right to assemble – and brutal crackdowns by security forces.

An uneasy status quo prevailed for the next decade in which an array of political parties – czarist absolutists, constitutional monarchists, liberal Republicans, Menshevik socialists, Bolshevik communists, and anarchists – clashed in ultimately futile attempts to bring about lasting legislative reform.

The stolid, some might say block-headed, resistance of Czar Nicholas to any meaningful curb on the power he wielded so poorly certainly contributed to the European powers’ overall drift into a world war in 1914. It was a war that Russia was in no position to fight, let alone win.

Early patriotic fervor at the onset of the war soon enough gave way to widespread outrage as Russian troops, again poorly-trained and abysmally undersupplied, died of starvation, hypothermia, and disease, as well as enemy fire, by the tens of thousands in the nightmarish trench warfare of World War I. One significant outcome of the 1905 Revolution had been the radicalization of broad sections of Russia’s peasantry. A decade later, the young rural men conscripted to serve as cannon fodder in an increasingly horrible war had little loyalty to a man most of them considered a tyrannical despot.

By 1916, whole divisions at the front were refusing to fight, as they sent representatives to the legislative Duma in St. Petersburg demanding an end to the nation’s involvement in the war. For all intents and purposes, the Russian army broke into two parts, one loyal to the czar, who by then had assumed inept command of the war effort, and the other, closer to the front, advocating disengagement and a separate peace with Germany. 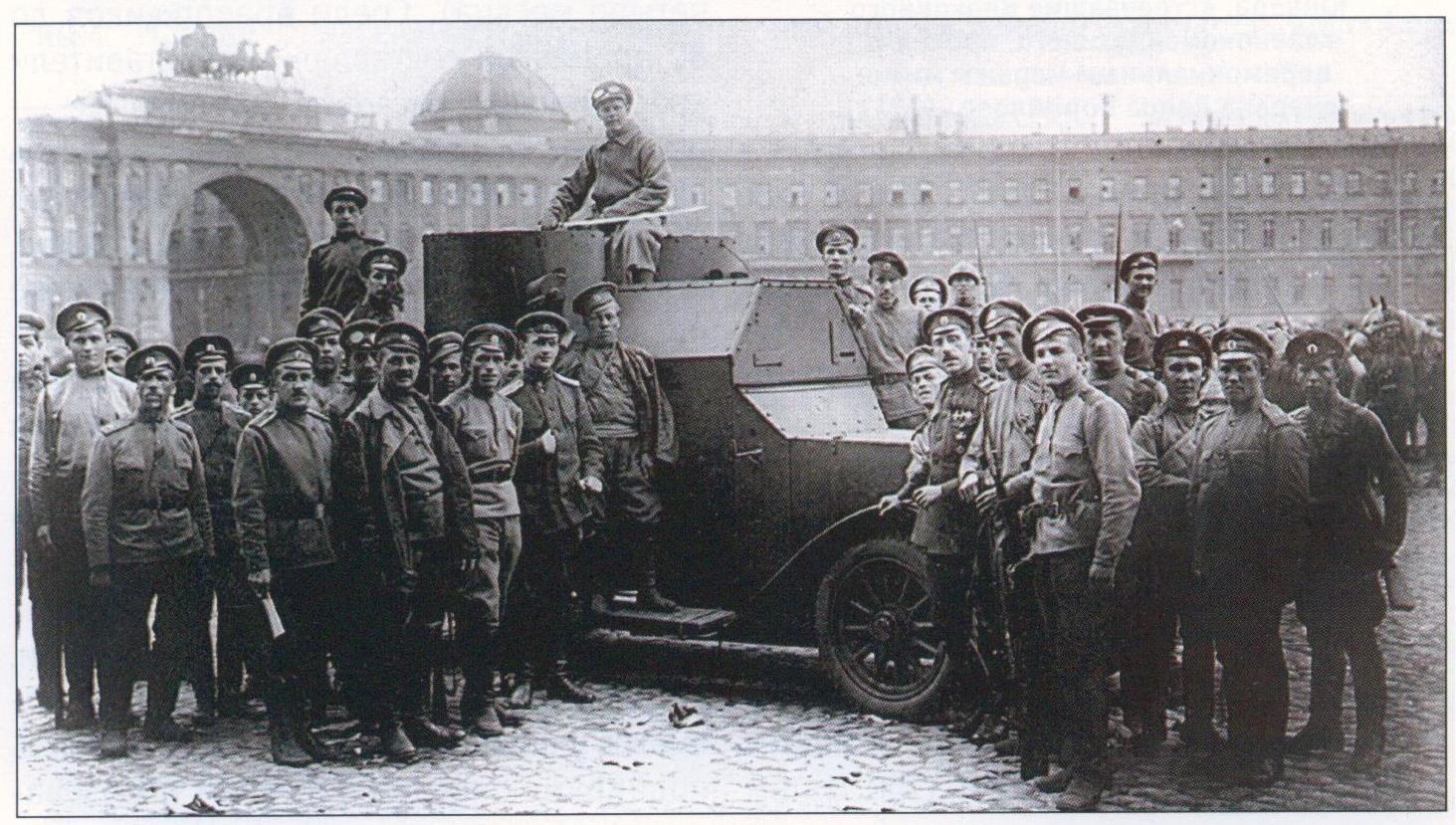 The latter faction, of course, prevailed in March 1917 with the start of Russia’s second revolution, the one in which Czar Nicholas finally lost his throne. The Menshevik leader Alexander Kerensky, briefly the Minister of War, became president of the short-lived Russian Republic.

Kerensky however proved to be nearly as out-of-touch as the czar, now under house arrest with his wife and children at an estate. Presuming the army to be loyal to the new republic, as well as relying on crucial allied economic support from England and France, Kerensky recommitted Russia to the war effort. It was an apparent betrayal of a promise of peace, and dealt a fatal blow to his government.

From the Bolsheviks to Czar Valdimir Putin

By October 1917, in events recorded by the American journalist John Reed in his book Ten Days that Shook the World, Army and Navy units loyal to the Bolsheviks and their leader Vladimir Lenin swept Kerensky’s government from power in St. Petersburg while he was at the front. Shortly thereafter, the czar and his family were brutally executed, and tens of thousands of Russians, including Kerensky, chose exile over imprisonment or execution. The Soviet Union was born.

Lenin’s successor, Joseph Stalin, paid particular attention to the role played by Russian armed forces in the 1917 Revolution(s) and, with a series of purges and a network of political commissars attached to the military, made doubly sure of the Red Army’s loyalty, especially during the second devastating war with Germany two decades later.

In that hideous conflict, Soviet soldiers suspected of even mild criticism of Stalin’s leadership faced execution or imprisonment in Siberian labor camps, as were any Russian troops at the war’s end unlucky enough to have been taken prisoner by the Nazis.

Nearly half a century after the end of World War II, in an ironic bookend to the Russian communist project, a 1991 coup attempt by Soviet hardliners against reform-minded Soviet president Mikhail Gorbachev failed after army special forces in Moscow refused to fire on crowds protesting the power grab in front of the office of then-Soviet Chairman Boris Yeltsin. The failed coup heralded the sudden end of the Soviet Union, while Yeltsin’s subsequent presidency led inevitably to the current oligarchic regime of Vladimir Putin. 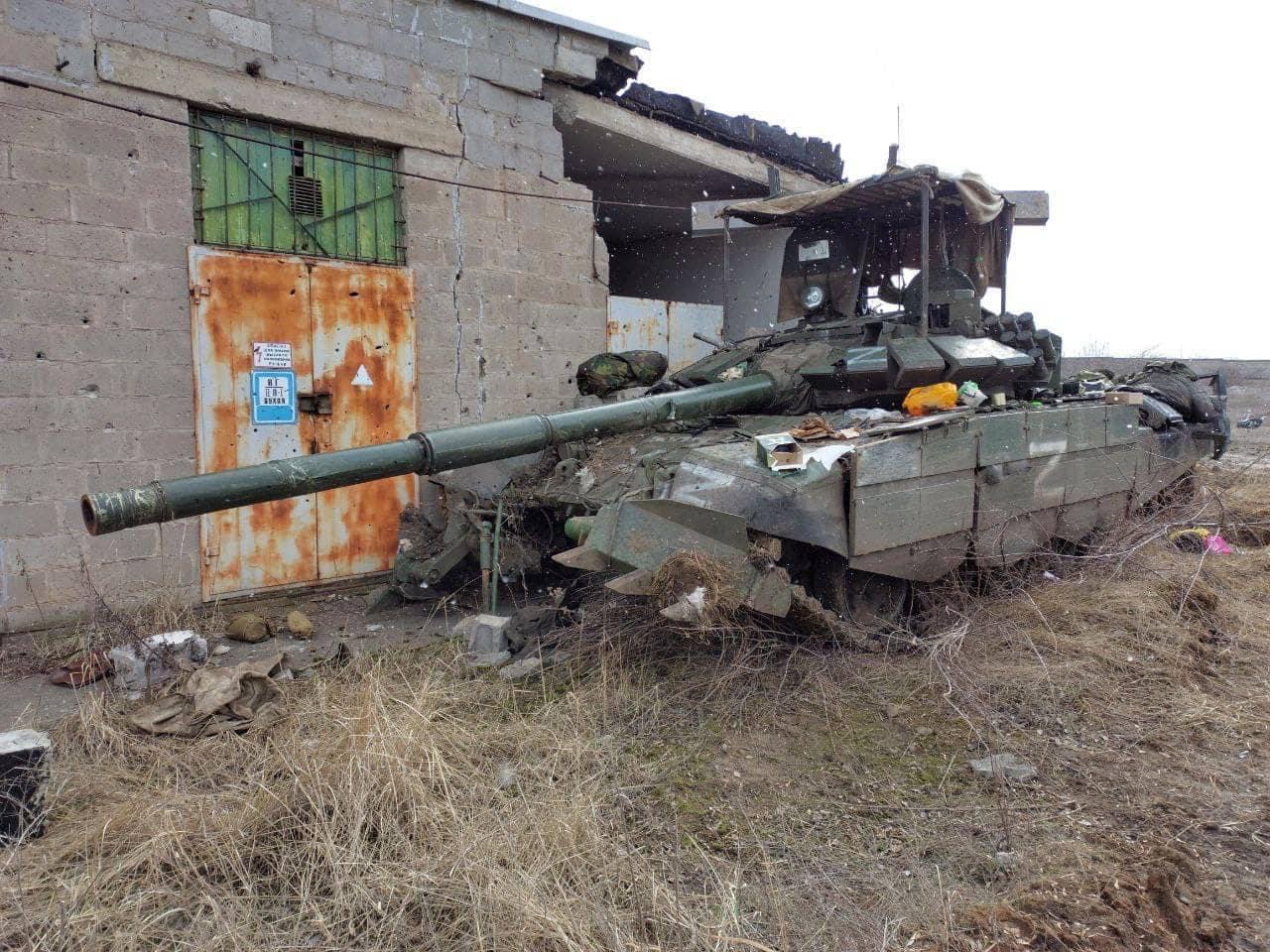 Now, Putin’s neo-czarist project of territorial expansion has devolved into a sickening war of attrition that Russia may not lose, but will likely never win. His overconfident planning, and the inept execution of what was supposed to be a handy victory over a far weaker opponent, neatly recapitulate the factors that led to the debacle of the Russo-Japanese War.

Unexpected and unthinkable failure may yet turn an angry Russian public against a blundering tyrant. And if history is any guide, pay attention to the nation’s military. There has been no change to the political makeup of that vast and troubled country without the explicit support of its top officers and a solid cadre of their troops. As in 1917, they might be the only ones who could bring an end to an ongoing debacle before anyone in the czar’s inner circle finds the ability to do so.

Contributing writer Joe Gioia is the author of The Guitar in the New World, a social history of American roots music. He lives in Livingston, Montana.

Just War Theory and the Ethics of Armed Conflict

Humans have waged wars for millennia, but is war ever justifiable? Just war theorists offer principles that explain when war is justified and how war should be conducted.

More than three decades ago, the United States and the U.S.S.R. nearly came to blows over a disabled Soviet space station called Salyut-7. Or did they?

The Rise of Catherine the Great – In Life and Legend

Catherine the Great’s rise to power was marked by intrigue, betrayals, and other court chicanery. But from these roots arose a leader who reigned over three decades, ruling the…