From The Wizard of Oz to the aptly named film, Twister, tornadoes often pop into our stories and popular culture. But what are these twisting tunnels of air, and why are they often thought to be a type of weather only frequently experienced in North America? To understand these questions, we’ll explore how and where these tornadoes form, and why they occur more often in regions like “Tornado Alley” than in other areas of the world.

Throughout my life, I have been fortunate to meet people from all over the world, and from all different backgrounds. One is a dear friend from Oklahoma who recently called me to catch up. After the standard pleasantries, she casually mentioned, with no more surprise or concern than if she’d discovered she was out of milk, that a tornado had just ripped through her backyard.

“A tornado! Are you okay?” My reaction was just a step below shouting, and I was clearly alarmed and surprised by the indifference in her voice. You see, she was my first close friend from that part of the U.S., and my knowledge of her region was limited.

She, on the other hand, was no more upset by the episode than one would be after getting a mildly inconvenient splinter. “Yes, it’s fine. My house is still standing, but now I need to go fish out debris from the pool,” she sighed. A picture she sent me later confirmed the scene, which was nowhere near as casual as my friend had first mentioned. Yes, the house was still standing, but the backyard looked like a battlefield – one that the trees had clearly lost. But for her, this was a commonplace experience, just part of a normal day in OK.

It’s a Twister! Tornadoes in the United States

As scary as it sounds, over 1,200 tornadoes are reported in the U.S. every year, and they’re not limited to the infamous “Tornado Alley” in the country’s Great Plains, which extend from Texas all the way up to North Dakota. In fact, every state in the country has had at least one twister touch down on its soil since records have been kept. 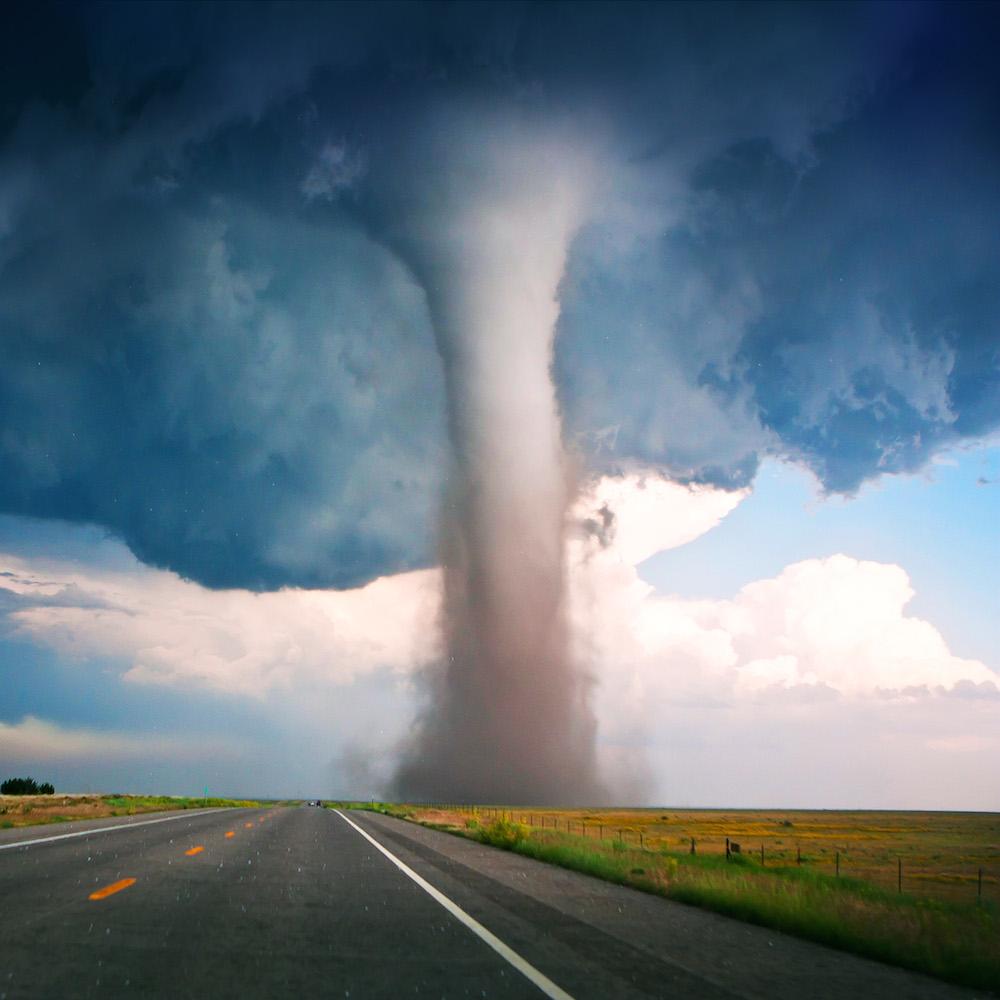 But usually when we think of twisters, we’re talking about “Tornado Alley” and the states associated with it. After all, the region must have gotten its nickname for a reason – and believe me, it did. Take Texas, for instance: People there have to hold onto their hats, because the Lone Star State sees an average of 125 tornadoes per year, earning it the distinction of being the state with the most tornadoes. That’s a huge number of twisters when you consider that Oklahoma is in a distant second, with about 57 tornadoes annually. Tied for third are Kansas and Florida, which are neck and neck in the race, with about 55 tornadoes each per year. (But, because Florida is the smallest of the four states, it is the winner when it comes to tornadoes per square mile.)

Still, Tornado Alley is where the action is for meteorologists and tornado chasers, especially in the springtime in the U.S. To understand why this region is affected by so many twisters, let’s take a look at how these impressive storms form.

Creating the Perfect Storm: What is a Tornado, and How Do They Form?

Tornadoes are vertical funnels of rapidly spinning air, and are the most violent of all atmospheric storms. In order for a tornado to be born, two weather conditions must be present: warm, humid air and cold, dry air. When they meet, the warm air rises, pushing through the cold. This creates clouds and thunderstorms and, when conditions are just right, the rising air will start to spin around a central funnel.

A funnel cloud officially becomes a tornado when it touches down onto the ground, and it may last anywhere from a few seconds to a few hours. On average, tornadoes move across the land at approximately 30 miles per hour and are about 660 feet wide. And their wind speeds can reach as high as 300 miles per hour and clear a pathway a mile wide and 50 miles long. No one knows how fast they can spin for sure, though – the higher-end wind speed measurements are just estimates because the tool used (anemometer) cannot withstand the force of a tornado. 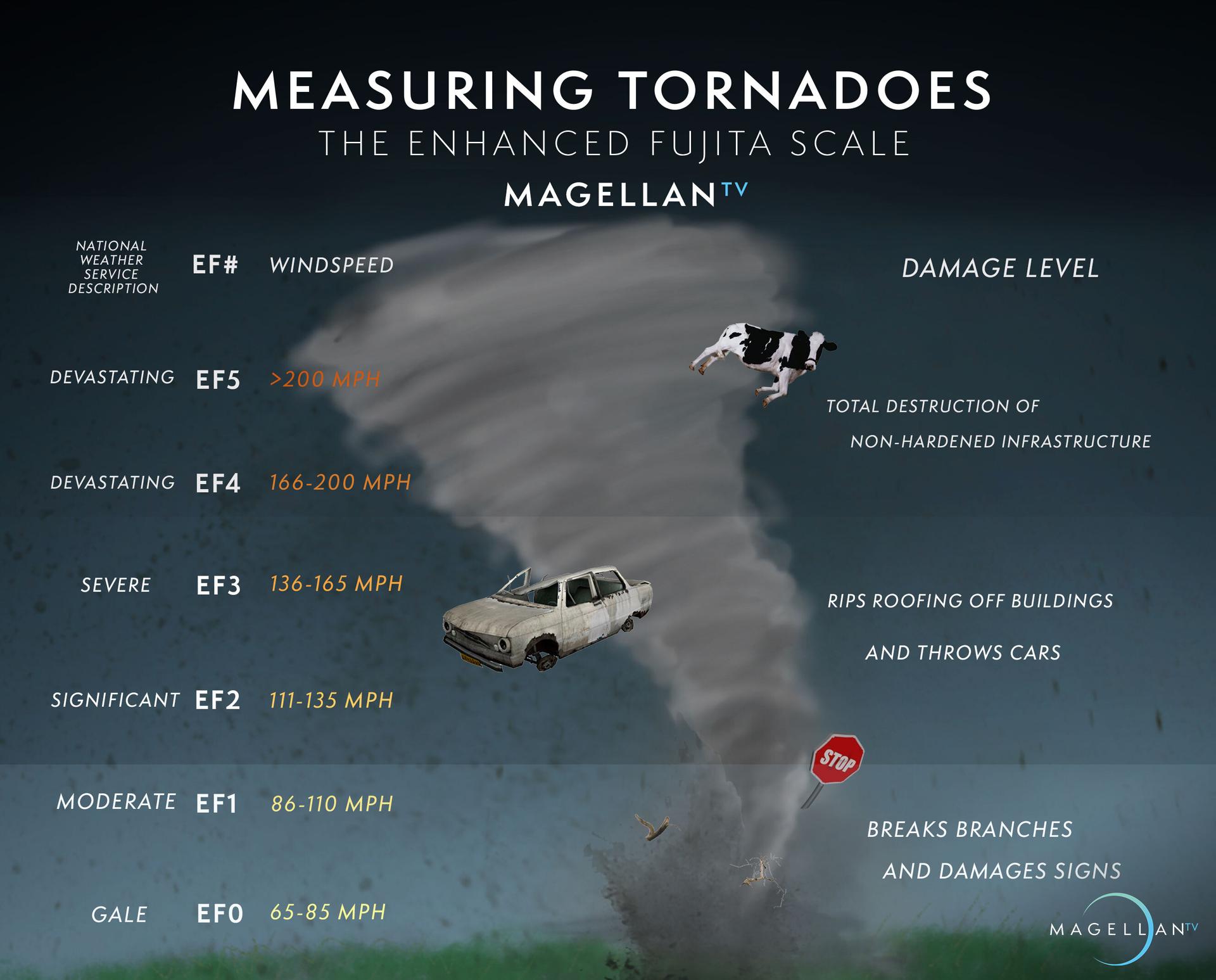 The Fujita scale ranks tornado strength on a scale from F0 to F5, based on the damage caused. Currently, we in the United States use the modified EF, or Enhanced Fujita scale, which considers more storm variables.

Think there’s only one type of twister? Think again. Tornadoes aren’t just wind, they can incorporate the other elements as well. Waterspouts are weak twisters that form over warm water; they sometimes move inland, becoming tornadoes as they strike. Dust devils (small, rotating columns of air carrying dust and dirt) and fire tornadoes (the name says it all) are also types of twisters that can form, though they are unrelated to thunderstorms. And, amazingly, there have even been “snownadoes” in winter months. While some types may not fit the bill of an official tornado, all of these crazy types of vortexes are in the same family as twisters.

But is North America the only place that tornadoes form? Perhaps surprisingly to many, the answer is no.

Tornadoes as a Worldwide Phenomenon

Contrary to popular belief (at least in the U.S.), tornadoes are actually more widespread than you may think. In fact, with the exception of Antarctica, tornadoes have actually occurred on every continent.

South America, specifically between Brazil and Argentina, experiences “tornadic storms” that produce hail and high winds that can lead to tornadoes. India and Bangladesh also have their share of twister troubles, and while their season only lasts a few weeks out of the year, they have a history of extremely dangerous storms. Even the United Kingdom is no stranger to tornadoes and, believe it or not, has more tornadoes relative to its area than any other country! But, even though it has a higher concentration of tornadoes, the frequency of tornadoes in North America can’t be beat. The U.K., which has more tornadoes reported than any other European country, still sees only about 33 a year.

So if tornadoes can occur mostly anywhere, why does America clock in with the most tornadoes – and by a landslide at that?

Why Does America See More Twisters than Any Other Place?

A large part of why the United States experiences a disproportionate portion of the world’s tornadoes is due to two major geographical features:  the Rocky Mountains and the Gulf of Mexico. The interaction between the two produces the perfect conditions needed for tornadic activity.

Remember, tornadoes need a mixture of warm moist air and cool dry air to get started. Well, the warm air moving up from the Gulf of Mexico and the cool air dropping down from the Rocky Mountains fit these requirements perfectly. Because of the Earth’s rotation, the cool western air is almost always aloft in this region, making it easy for the warm air from the Gulf to get trapped underneath. When this happens, thunderstorms begin to form – and where you have lots of thunderstorms, there is always the potential for tornado development.

Chase Down a Storm?  Or Watch a Documentary?

Out of the 1,200 or so tornadoes the United States sees per year, 60 to 70 percent are weak (EF0 and EF1 tornadoes) , about 35 percent are strong (EF2 and EF3), and around 2 percent are categorized as violent (EF4 and EF5). Given that many twisters, 2 percent is no small number. And, unfortunately, it’s not uncommon for a tornado to leave a wake of destruction – sometimes so devastating that it takes years to recover. Take Joplin, Missouri, for instance. On May 22, 2011, one of the most severe tornadoes in American history – an EF-5-rated tornado – struck the town of Joplin and caused $2.8 billion in damages and left the town recovering for years.

All this is enough to make me want to run away from any tornado that touches down near me, but some people actually go chasing after them. Luckily, you can watch documentaries that provide a window into this hazardous activity from the safety of your own home. If tornado chasing sounds like a thrill, or if you’re simply curious to see what a tornado looks like close up – without having to get close up – films like Tornadoes put you in the car next to those brave (or reckless, depending on how you look at them) people who get a thrill from hunting twisters down.

I don’t know about you, but personally I’d much rather stream a video of a tornado than chase one. But I have to admit that even though they are scary, they sure are fascinating.

Tsunamis are among the most destructive natural disasters on Earth. What are these enormous waves that roll in from the ocean? How do they form? Why do tsunamis cause so much…

Volcanoes are among the most destructive natural forces on Earth. How are volcanoes formed, where are they located, and what damage can they wreak? What role do plate tectonics…