The Elizabethan Globe theater was the original site of some of William Shakespeare’s greatest plays, and so the birthplace of modern drama. It was demolished by London’s Puritan government in 1643. But a rebuilt Globe theater rose again in the late 20th century very near where the original stood. Its open-air design and traditional, daylight productions gave modern audiences a thrilling sense of the superb craft of the Elizabethan stage, and a new insight into the Bard’s power with words. Now in the 21st century, theaters modeled on Shakespeare’s Globe are attracting audiences around the world.

In the summer of 1997, I  lived an English major’s dream by attending Henry V, the inaugural production of Shakespeare’s Globe Theatre in London. Modeled as accurately as possible on the Tudor-age venue, the new theater was built on the south bank of the Thames river, about 200 yards from the Globe’s original site.

This new Globe was the brainchild of American actor and director Sam Wanamaker, who began his reconstruction campaign in 1949. A trust was established in 1970 to raise funds for a donated building site, and architectural plans were completed in 1989. When Wanamaker died, at 74, in 1993, the project was well underway. Still, its 1997 premiere was clouded by controversy. Some considered it a showy American gimmick dropped on London. Theater purists presumed it could not produce a legitimate theatrical experience, comparing the project to what you might find at Disney World – something from Shakespeare Land.

The new Globe’s thatch roof, treated with fire retardants, was the first one allowed in London since the Great Fire of 1666.

In fact, that production of Henry V was one of the most captivating, and fun, times I’ve had at a theater, a triumph of traditional British stagecraft that offered fresh insight into Shakespeare’s work. No matter that I had to stand throughout the performance, in a crowd of fellow “groundlings” who also purchased the cheapest ticket available, on a cool, overcast September afternoon with occasional light English rain. 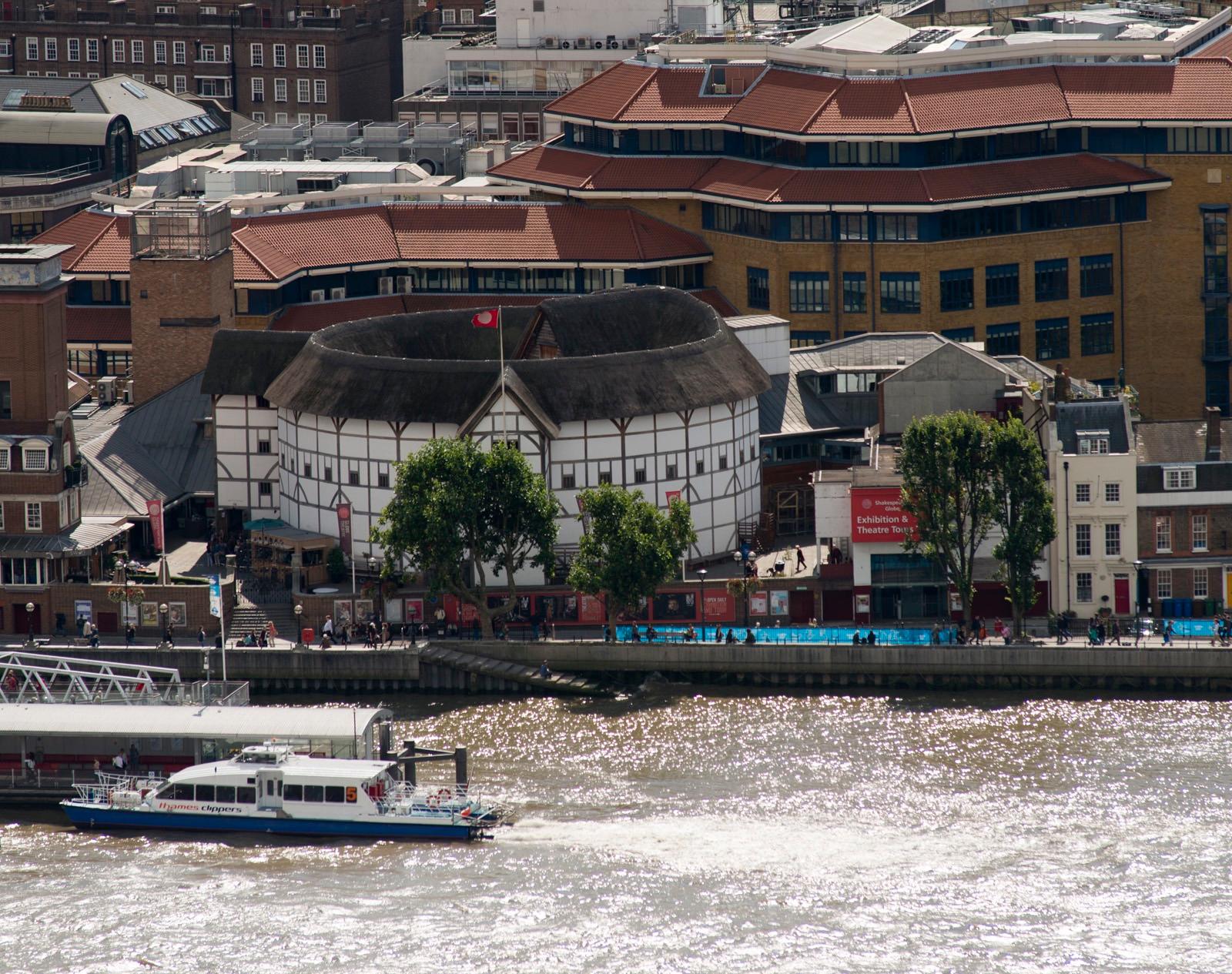 The original Globe was home to an acting company founded by James Burbage, a woodworker by trade, who, in the latter half of his 66 years, became the most successful theater impresario in England. His son Richard was the foremost actor of the time, and Burbage discovered a promising young performer, who also had a way with words, from their hometown of Stratford-on-Avon: William Shakespeare.

The Burbage success story began in 1567, when James built The Theatre – the city’s first permanent playhouse since Roman times. It stood well beyond the northern edge of the city, next to a pub and a dog-fighting ring belonging to the man who leased his land to Burbage for his new venue.

Before The Theatre, English plays were performed at fairs, in public squares, and, for more select audiences, college and palace courtyards. Henry VIII’s Protestant Reformation freed the theater from religious themes, and by the reign of his daughter, Elizabeth I, English drama served-up everything from trashy murder stories to poetic pageants, comedies, tragedies, and, Shakespeare’s early specialty, patriotic royal histories.

When James Burbage died in 1597, a dispute arose between his heirs and the landowner, who claimed The Theatre as his property. The showman’s sons, Richard and Cuthbert, insisted they owned the building’s timbers and ironwork and, in four days over the Christmas holiday (while the landlord was out of town) had the building dismantled. A crew of workmen carried the materials across London. The next summer, on a swampy parcel of land on the south bank of the River Thames, they began building the Globe. Modern theater was born there, as well as, some would say, the modern world itself.

The landlord sued the Burbages for £800, preserving the story of The Theatre’s deconstruction in court records. Two years later, a judge ruled that the acting company had every right to transport its property to another location.

By 1597, the Burbage company was called the Chamberlain’s Men, recognizing its patron, Lord Hundson, and his role as producer of royal entertainments. Shakespeare was given part ownership in the relocated theater, reflecting his contributions to the business. Thanks to this, when he died in 1612, Shakespeare was quite a wealthy man.

The new theater’s neighborhood of Southwark, across the river from London proper, was a notorious entertainment district free from the city’s laws. Another playhouse, the Rose, stood nearby, as did pubs, brothels, and the squalid pits and rings where animals such as dogs, bears, and bulls were set to fight for the entertainment of betting customers.

Southwark was also home to packed tenements housing immigrants from rural England and overseas, with somewhat more respectable lodgings for theater people, including Shakespeare. Rising up in these tough surroundings, the Globe was a rounded polygon three stories tall that enclosed an open-air, raised thrust stage and surrounding “pit.”

The structure measured 100 feet across and held about 3,000 people: the groundlings who paid a penny to stand around the canopy-covered stage, and fancier customers who could afford another penny to sit on oak benches (seat cushions cost extra) in a surrounding three-level gallery. There was a narrow balcony on the rear wall behind the stage for musicians, and the occasional dramatic scene (in, for example, Romeo and Juliet). Two doors in the rear wall were for entrances and exits, and a trapdoor in the stage allowed for simple special effects.

In contrast to the original Globe’s lawless setting, modern London fire regulations cap the audience size of the new theater at 1,400 people.

Performances were during daylight hours, beginning at 2:00 p.m. in the winter, summers at 3:00 p.m., and lasted from two to three hours. Beer and wine were for sale, along with clay pipes filled with tobacco, gingerbread cakes, and, a particular favorite, hazelnuts. Actors recited their lines briskly and emoted through broad gestures and poses that signified feelings to the audience.

Those customers demanded spectacle, beautiful costumes, thrilling stories, and diverse entertainment. Music, songs, and dances were expected after every play – including tragedies. The plays, both comic and tragic, featured characters from every social level, another of Shakespeare’s specialties. He gave all his characters a new sense of language, an inventive barrage of mystery and wit, laced with indelible images and catchphrases that would be repeated throughout London.

In 1613, the Globe caught fire when a prop cannon ignited its thatched roof during a performance of Shakespeare’s Henry VIII. Rebuilt the following year, it was torn down by the Puritan government of Oliver Cromwell in 1643.

It is generally accepted that the Globe opened in 1599, as did the new one in 1997, with Henry V. A history play, it depicts the formerly reckless Prince Hal, now crowned king, leading a diverse army of his subjects drawn from the breadth of his kingdom to victory over the French at the battle of Agincourt.

Shakespeare’s audience would have been familiar with the prince and his misadventures with the comic Sir John Falstaff from the Bard’s earlier plays, Henry IV parts I and II. Henry V is Shakespeare at the height of his powers, and patriotic propaganda of the first rank. Its magnificent poetic speeches have moved English audiences for centuries.

The action of Henry V is propelled by a narrator who opens the play. Scholars believe Shakespeare himself debuted the role, and the drama’s inaugural words apparently speak directly to his delight with the new theater:

O for a muse of fire, that would ascend

The brightest heaven of invention.

A kingdom for a stage, princes to act

And monarchs to behold the swelling scene!

A modern theatergoer, used to sitting quietly in the dark in front of a lighted stage, quickly realizes how personal the Elizabethan theater was. Standing in broad daylight only a few feet from the actors, they see you as clearly as you see them. Eye contact is part of the show, and reaction from the spectators is encouraged. 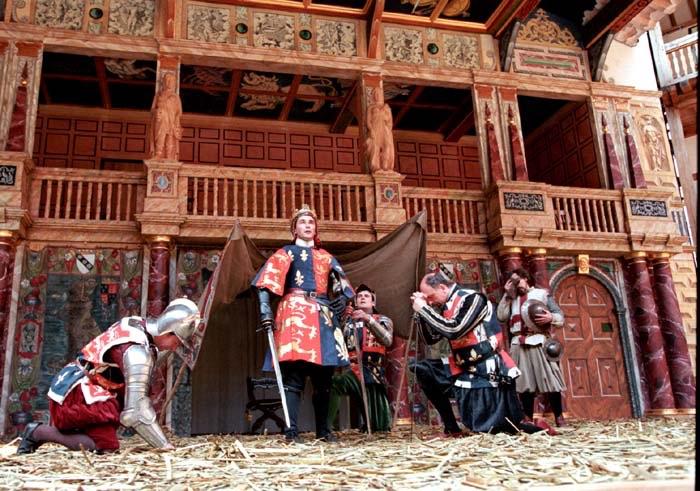 When, in the performance I attended, the French king and his lords stalked onto the stage for Act II scene IV, the audience hissed and booed. Hearing us, the costumed aristocrats looked out at the house and sneered. Later, the narrator begins Act V by reporting that the victorious Henry has left France to return home:

and solemnly see him set on to London.

And, loudly naming the city, the actor opened his arms as if to take it in. The London crowd cheered.

Even as the replica of Shakespeare’s theater was going up, archaeologists uncovered the ancient foundations of both The Theatre, and the original Globe.

But the true nature of Shakespeare’s popular genius came earlier, in Act III scene I, when Henry rallies his troops in the midst of battle with the speech beginning “Once more into the breach, dear friends…” In standard productions, this speech is delivered to actors in costume. At the Globe, both in 1599 and 1997, King Henry directly addressed those of us near the stage.

For there is none of you so mean and base,

That hath not noble luster in your eyes.

I see you stand like greyhounds in the slips,

Straining upon the start.

It is not far-fetched to say that Shakespeare, in passages such as this, helped define the English as citizens of a united kingdom, even as he brought new life to their language.

It was possibly in recognition of this patriotic purpose that the Burbage players gained the patronage of the new king, James I, who came from Scotland to assume the English throne upon Queen Elizabeth I’s death in 1603. They became then the King’s Men, attendants to the royal court, and the kingdom’s premier theater company. Now giving performances indoors in the winter for aristocratic audiences, the Burbages leased the Globe to other theater troupes, returning to it for their summer productions.

Now a quarter century after the new Globe’s debut, theaters patterned on its old-school plan have become audience magnets, recognized for their dramatic potential. A Pop-up Globe is a popular attraction in New Zealand, and a new open-air Globe has been proposed for the Shakespeare Festival theater in Stratford, Connecticut. Other theaters using the Globe’s design are found in California, Texas, Virginia, Japan, Germany, and Argentina. You might say that, more than 420 years after it first opened, the Globe has gained a permanent place on the world’s stage.

Was Shakespeare gay or bisexual? Amid debate, new research reveals undeniable queer themes throughout his work, in poems and in plays. Did he do this intentionally? If so, the…