In September 1666, after a two-year drought, London burned for three days. Eighty percent of the city was reduced to ash. Palaces and tenements, river warehouses and elegant neighborhoods, along with the homes of 70,000 people, were consumed in a firestorm that could be heard 50 miles away. Measures were taken in the fire’s aftermath to make sure nothing like it ever happened again.

Early cities were ramshackle projects, built haphazardly out of wood in an era when home heating came from fireplaces and lighting was via candles and oil lamps. Consequently, fires consumed whole sections of Copenhagen (1728 and 1795) New York (1835 and 1845), Chicago (1871), Boston (1872), and San Francisco (1906).

Their revivals came thanks to lessons learned in 17th century England in the wake of  possibly the greatest calamity outside warfare in human history – 1666’s Great Fire of London. The three-day inferno burned 80 percent of the city and led to measures to prevent such disasters from happening again. It also revealed aspects of human nature and the natural world that are beyond regulation, that make devastating fires an eternal threat.

Why London Was Waiting To Burn

In 1666, London’s population of 100,000 took up all the available space for two miles along the north bank of the River Thames and inside the old Roman city wall. The ancient fortification formed a half-mile wide arc uphill from the Tower of London at its eastern end to the River Fleet at the western. Beyond were the government seat at Westminster and royal palace at Whitehall.

A typical London street was wide enough for two carts to pass, bordered by houses of several storeys. They were built like inverted pyramids with upper floors jutting over lower ones until buildings across the street nearly touched at the roofline. Lower levels held businesses with living quarters for the proprietors, servants, and renters above.

Surrounding relatively prosperous blocks were narrow lanes, alleys, and dead-end courtyards that serviced multi-storey tenements, sinks of the plague that had infected the city by then for over a year. 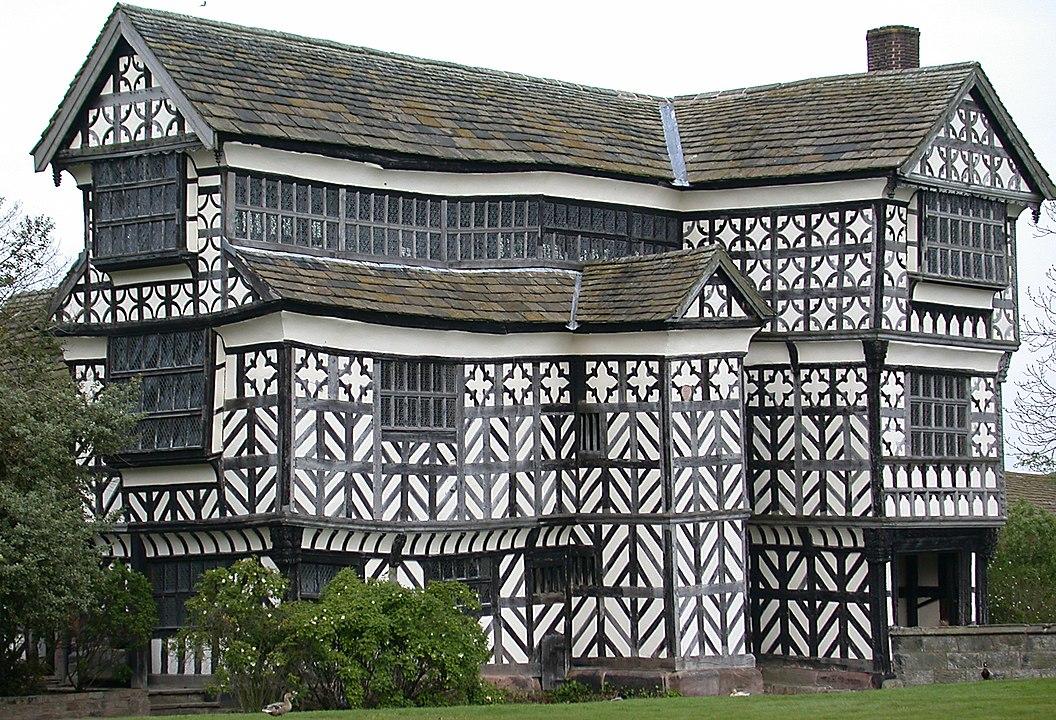 Gales blowing westward from the North Sea turned London’s narrow, overhung streets into wind tunnels. In 1666, the city was suffering through the second year of a withering drought, and by September those wind tunnels had dried to kindling.

The Thames docks were jammed with Royal Navy warehouses and merchants’ depots stacked with timber, coal, raw wool, hemp, and fabrics, and barrels of flour, sugar, brandy, pitch, wax, oil, and gunpowder. Wooden shanties of the people who worked along the river also crowded the shore.

Watch The Great Fire: In Real Time on MagellanTV

On Saturday, September 2, an easterly gale began blowing hot and dry. Early the next morning a senior civil servant attached to the Navy and living near the tower, Samuel Pepys, was awakened by his maids to see a fire about a quarter-mile away. Used to such sights, Pepys – as he recorded in his journal – went back to sleep.

In fact, dangerous fires in London were commonplace, handled by a mix of bucket brigades, gallon-sized syringes, and early pumps, called engines, that spouted river water while gangs of men used hooks and chains to tear down adjacent buildings to isolate any blaze. While these remedies were attempted on that night’s fire, which started in a bakery near the river, the fierce wind, and a good amount of human error, made them woefully inadequate for the task.

How the Great Fire Spread

The gale-driven blaze, which soon reached an estimated 1200°C (almost three times the temperature of logs burning in a fireplace), ate into the densely-packed warehouses abutting the bakery and ignited them like roman candles. Once established there, it started its inexorable journey west.

As this leading arm spread along the riverbank, the conflagration moved northward, heading uphill. A mile-long scythe of flame soon cut through London’s center. St. Paul’s Cathedral, which stood for 600 years on the city’s highest point, would be consumed at the height of the inferno two days later.

“We staid till, it being darkish, we saw the fire as only one entire arch of fire from this to the other side the bridge, and in a bow up the hill for an arch of above a mile long: it made me weep to see it. The churches, houses, and all on fire and flaming at once; and a horrid noise the flames made, and the cracking of houses at their ruins.” —Samuel Pepys, September 2, 1666

For three days, panic prevailed as people, screaming and crying, clogged the streets ahead of the fire, hauling away what possessions they could in a whirlwind of smoke, burning ash, and dust. Looting was rampant. Bands of soldiers and sailors tried forming fire breaks by pulling down buildings. But burning embers carried downwind started fresh blazes. Whole blocks ignited in moments. Buildings demolished for firebreaks could not be cleared fast enough, and only added more fuel.

By Monday, September 3, the fire reached far west. The heat was so intense that stones in walls exploded, and bodies buried six feet under London’s churchyards were roasted in their graves. London’s great church bells, which on Sunday had rung constantly to alert the city to the impending disaster, crashed from their towers and melted into molten streams that further spread the fire. Some 87 churches were consumed. When St. Paul’s Cathedral finally burned, it’s massive lead roof liquified, forming two molten rivers that ran downhill to the Thames.

A Duke Takes Command of Fighting the Fire

James, Duke of York, a trained soldier and King Charles II’s brother, had command of the city and, at no small danger to himself, directed the firefighting, setting up fire stations ahead of the blaze. But London’s water system had collapsed, as conduits across the city had been cut open in a futile attempt to put out the fires. 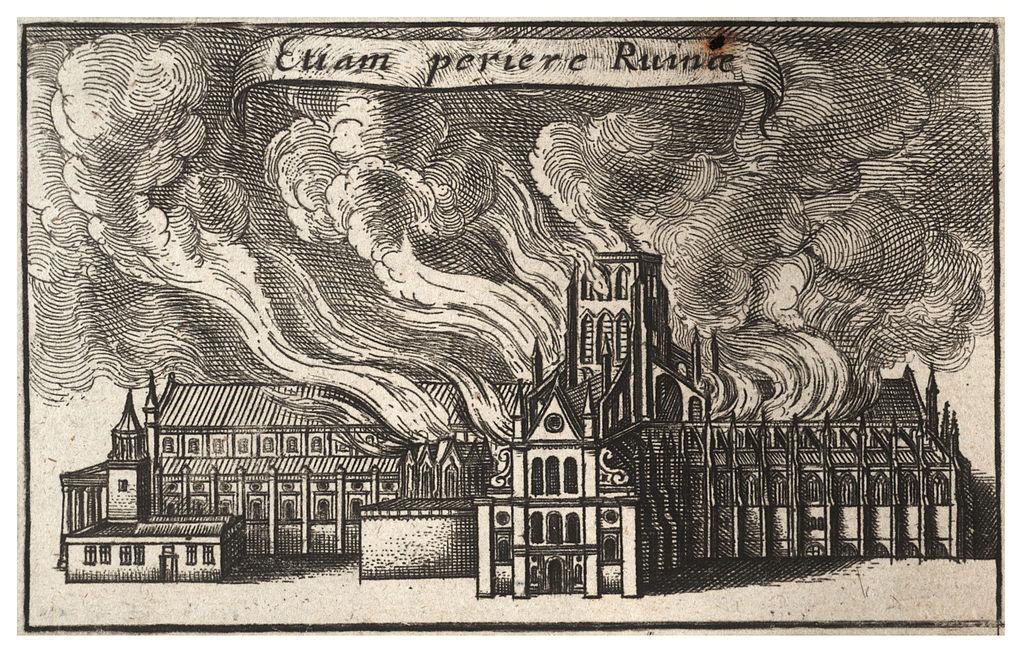 Monday’s loss was incalculable. Moving north, the fire devoured the financial district of goldsmiths and bankers clustered around the Royal Exchange. The fire, 100 feet high, became a storm with its own weather, sucking hurricane force winds from all directions into its core and spawning lightning at its crown. Its terrifying roar could be heard as far as Oxford, 50 miles away. It sounded, people said, like waves crashing in a storm.

On Tuesday, September 4, utter catastrophe reigned. The city’s booksellers had stored all of their inventory – books, medieval manuscripts, pamphlets, and printing presses – in the vast stone vault under St. Paul’s Cathedral, confident it could resist the fire. When the roof collapsed, the vault was incinerated. The riches of a great mercantile city – libraries, tapestries, paintings, jewelry, furniture, clothing, statues, and silverware – 400 streets, and the dwellings of 80 percent of its citizens, were reduced to ash in three days.

“... walking into the garden, and saw how horridly the sky looks, all on a fire in the night, was enough to put us out of our wits; and, indeed, it was extremely dreadful, for it looks just as if it was at us; and the whole heaven on fire.” —Samuel Pepys, September 4, 1666

And it could have been much worse. For days, the prevailing wind mostly carried the blaze away from the Tower of London, where much of the city’s gold had been carried. Besides being the Royal jail and the site of the Royal menagerie (the terrified shrieks of lions, elephants, and apes inside added to the chaos), the Tower was storehouse for the military’s supply of gunpowder – over 500 tons of it. If the fire reached there, the explosion would have equaled that of a small atomic bomb. England, as an autonomous civic state, could have vanished in an instant.

Firepower Saves the Tower of London and Westminster

Amazingly, some of that gunpowder ended up stopping the fire’s spread. On Wednesday, the Duke of York directed the use of the explosive to demolish lines of buildings ahead of the fire, which by then was threatening Westminster. To the east, a crew of sailors called up by Pepys tore down and blew up buildings between the fire and the Tower.

And on Wednesday, the wind died down. The fire, now contained, continued burning – some basements filled with coal blazed for weeks – but did not spread. It was soon stamped out.

Most of London’s estimated 70,000 homeless camped in the fields north of the city for a relatively short period before moving back to their still-smoldering neighborhoods. Markets were established by royal proclamation to distribute food. Workers and donations streamed into the city to help rebuild.

The fire spread so quickly that rumors of grenade-throwing Dutch, or French, or Catholic saboteurs raged for weeks. Innocent people were beaten by mobs. One young Frenchman, clearly of unsound mind, confessed to starting the bakery fire. Though no one in authority really believed him, he was tried anyway. Found guilty on the strength of his own confession, the mad Frenchman was hanged.

The official death toll was listed at an unlikely six. Given that the fire’s intense heat would have cremated bodies lost in the flames, it is probably far higher.

A temporary Royal Exchange was set up in the undamaged northeast crescent of the city, and a new public market was established at Covent Garden, then an elegant plaza well west of the fire line. New regulations required the burned district to be rebuilt in brick and stone. Streets were widened, and building over three storeys was prohibited. Upper floors could no longer overhang the ground, and distance between buildings was strictly regulated.

Samuel Peyps suffered nightmares of the fire for months afterwards, writing in March 1667, “... to bed, and mightily troubled the most of the night with fears of fire, which I cannot get out of my head to this day …”

London survived, and soon gained in strength and importance. Though rebuilding took years (the new St. Paul’s wasn’t finished until 1711) the quick revival of daily commerce is credited to prompt action by Charles II. An otherwise dissolute and unpopular king, he maintained order, reestablished markets, and directed aid to the victims.

Also in the aftermath, London companies offered a new product – property insurance. This innovation combined with strong government authority was a model for urban disaster relief. Following their own catastrophes two centuries later, New York, Chicago, and San Francisco were able to rebuild in months.

London, built out of country materials – all that timber, wool, and pitch – burned like a parched forest. Flames crowned the city’s roofs just as forest fires travel across tree tops. In both cases, super-heated “underbrush” burst into flame, and firestorms, with their own wind and lightning, formed.

Today, cities reach into the country, creating a new populated landscape able to burn quickly. As hot, dry, and windy conditions prevail, we will need new rules for living in an environment not completely of our own design – and to come to terms with one of the basic conditions of life on the planet: fire.

Buried treasure, sword fights, and eyepatches – it’s easy to be enthralled by tales of pirates in books and film. But even without the fluff and fantasy of Hollywood’s version,…

An almost forgotten medieval uprising of serfs has directly improved our lives today. In the late 14th century, Wat Tyler led the English peasantry in a revolt against the harsh…

Mary Queen of Scots served as queen of multiple kingdoms before she was dethroned for her faith and the controversies that followed her in life. She was Catholic in the face of…