From the first witch killing in ancient Greece to the infamous trials in Salem, Massachusetts, witch hunts have deep roots throughout history. Let's compare witch hunts of old to the way the term is used in today's world.

King James VI of Scotland thought that witches were out to get him. He believed this so resolutely that, during his four years in power, thousands of people were executed in his realm on the basis of their (alleged) occult activities.

James’s reign was a high point in a feverish attack on witches that swept Europe from 1450 to 1750. During this time, tens of thousands of people were killed, and millions suffered torture or arrest. Out of all those victimized, roughly 75% were women.

The European explosion of witch hunts was a time of constant execution by fire. It wasn’t long before the same sentiment would grip America. We’ll get to the circumstances of these witch hunts later, but for now, know that King James VI was far from the only ruler to scapegoat so-called witches for his and his nation’s problems. 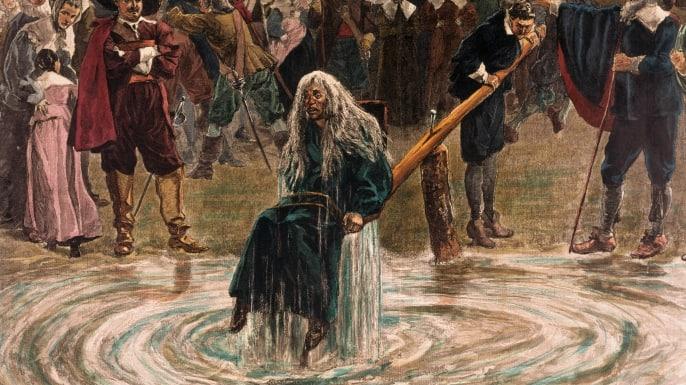 In ancient times, the line between the spiritual and physical world was nearly invisible. Way back around 18th century B.C.E., the Code of Hammurabi accepted witchcraft as a given, as did many ancient pagan faiths.

“If a man has put a spell upon another man and it is not yet justified, he upon whom the spell is laid shall go to the holy river; into the holy river shall he plunge. . . . If the holy river declares him innocent and he remains unharmed the man who laid the spell shall be put to death.” — The Code of Hammurabi

As Western philosophy and monotheism rose in prominence, so did fears of folk magic. Ancient Jewish folklore proposed that witchcraft was taught by fallen angels to their mortal wives. Later, Jewish theology made a point of linking witchcraft with women, though many texts make a distinction between benevolent and malicious sorcery.

The Bible took things further. One particular Old Testament verse – Exodus 22:18, which reads “thou shalt not suffer a witch to live” – was later invoked in many witch trials. (It might be worth mentioning here that each of these texts was written for and by men).

Soon enough, magic and witchcraft had become taboo, and before long, defenders of the world’s new orders were out for blood.

The oldest witch trial on record may be the ordeal of the Greek intellectual, Hypatia, born around 355 C.E. in Alexandria. Instructed in mathematics and astronomy by her father, Hypatia became a Neoplatonist, a variant of paganism, and was subsequently accused of witchcraft. She was flayed to death by a mob of Christians, and her academic works were destroyed in an attempt to erase her existence from memory.

A later case involved the Gnostic Christian woman Angéle de la Barthe, who was born around 1230 in Toulouse, France. Accused of having sexual relations with Satan, she was tortured and confessed to the accusations. The shadowy corners of history are filled with these kinds of events.

The Origin of Witch Hunts in Medieval Europe

In the Middle Ages, the Roman Catholic Church launched the Inquisition, which essentially functioned as a policing force. On December 5, 1484, Pope Innocent VIII issued a papal bull (or ordinance) condemning witchcraft.

He also chose two men named Jakob Strenger and Heinrich Kramer to lead the fight against occultism. These men produced a book called Malleus Maleficarum (or The Hammer of Witches), which contained fictional and speculative stories about witches – and advocated for torture as a valid means by which witches could be forced to confess.

According to the book, witches could be identified if they floated in a “blessed” body of cold water, or if they possessed the “Devil’s Mark,” which could be any kind of birthmark or wart. These marks could be found by publicly “shaving all hair off the accused and examining every nook and cranny of the body.”

Before long, the European Witch Hunts had begun.

“Conclusion. Everything is governed by carnal lusting, which is insatiable in [women] . . . for intelligent men it appears to be reasonably unsurprising that more women than men are found to be tainted with the Heresy . . .” — Malleus Maleficarum

Following the text’s publication, a series of trials and murders began to arise in Europe. Between 1500 and 1660, up to 80,000 people were put to death. The highest execution rates were in Germany, but the murders swept through France, Italy, Switzerland, and, of course, Scotland, thanks to our friend King James VI.

As detailed in MagellanTV’s documentary “War on Witches,” James oversaw the passage of several laws that made witchcraft easily punishable by death, sparking a feverish pursuit of witchcraft across the continent.

Where did James’s hatred of witches come from? Perhaps childhood trauma is to blame. James inherited the throne at just 13 months old, after losing both of his parents, and was himself the victim of numerous assassination attempts. A sickly child, unable to walk without rickets for most of his early life, and possibly homosexual, James was not a happy camper early on.

Eventually, a (heterosexual) marriage was required. Fourteen-year-old Anne of Denmark was chosen as his bride, and this is where the witch trouble began. When a mission to meet his young bride on the shores of Norway was nearly derailed by a storm, James blamed witches, and his interest in black magic grew into an obsession.

After he made it home, he had 70 women arrested on the charges that they had attempted to kill him while he was at sea. The women were tortured, and many eventually confessed that they had cast various gruesome spells to sabotage the voyage. James VI took such a personal interest in their cases that he brought one of the suspects, Agnes Sampson, to the Holyroodhouse in Edinburgh so he could interrogate her himself. When she denied the charges, he had her imprisoned and tortured until until she confessed.

James’s obsession with witches was rooted in fierce misogyny and personal insecurity. This became clear in his treatise on witchcraft called Daemonologie, in which he argued that women were much more likely to be susceptible to Satanic influence than men. In his version of the Bible, he changed all mention of witchcraft to apply exclusively to women.

“As that sex is frailer than man is, so is it easier to be entrapped in these gross snares of the Devil, as was overwell proved to be true by the Serpent’s deceiving of Eve at the beginning which makes him the friendlier with that sex since then.” — James VI, Daemonologie

James certainly did not invent witch hunts, but he did play a major role in exacerbating fears and paranoias that already existed. Eventually, the European witch hunts fizzled out in the late 18th century, though the scars on history remain. 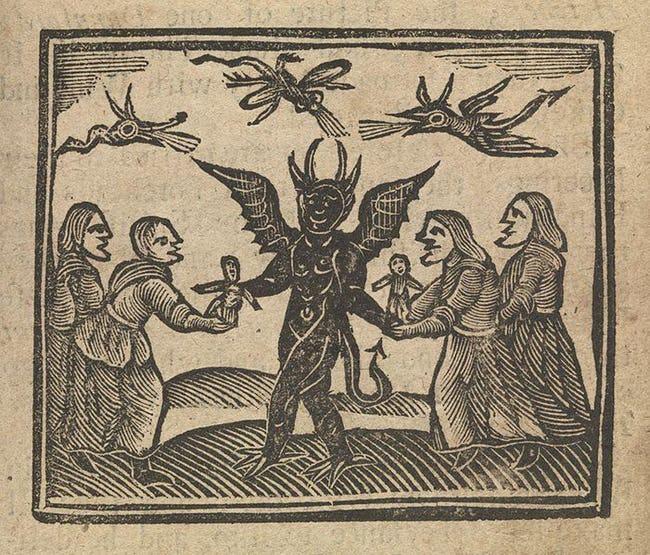 Witch Hunts in America: From Salem to McCarthy

As troves of Europeans moved to America, so did their superstitions.

Contrary to popular belief, the earliest witch hunts in America actually took place in Hartford, Connecticut, not Salem, Massachusetts. In 1642, Connecticut made witchcraft a crime punishable by death, and, in 1647, a woman named Alse Young became the first supposed witch executed in America.

The second woman executed for witchcraft in the colonies, Mary Johnson, was detained and tortured for years before admitting “familiarity with the Devil.” (In light of the brutality that this woman faced, one might ask who the real devil was in this situation.)

The period from 1647 to 1670 became known as the Hartford Witch Panic. During this time, about three dozen people were charged with witchcraft, and eleven were hanged. Nine of the victims were women, and the two men who were executed were killed alongside their wives.

The parallels between victims of these trials indicate that witchcraft accusations disproportionally fixate on people viewed as socially disposable, such as women of color, poor women, single mothers, widows, older women, and others who provided no “productive value” within society. Most of the time, it took only a single witness to successfully condemn a witch to death, revealing just how skewed the whole system was in favor of well-respected Christian men and their families.

Actually, the American colonies were the perfect breeding ground for witch hunts. Life in colonial times was quite difficult, and, just like they had during the Middle Ages in Europe, many settlers blamed Satan – and, by proxy, anyone who deviated from Puritanical norms – for their woes. 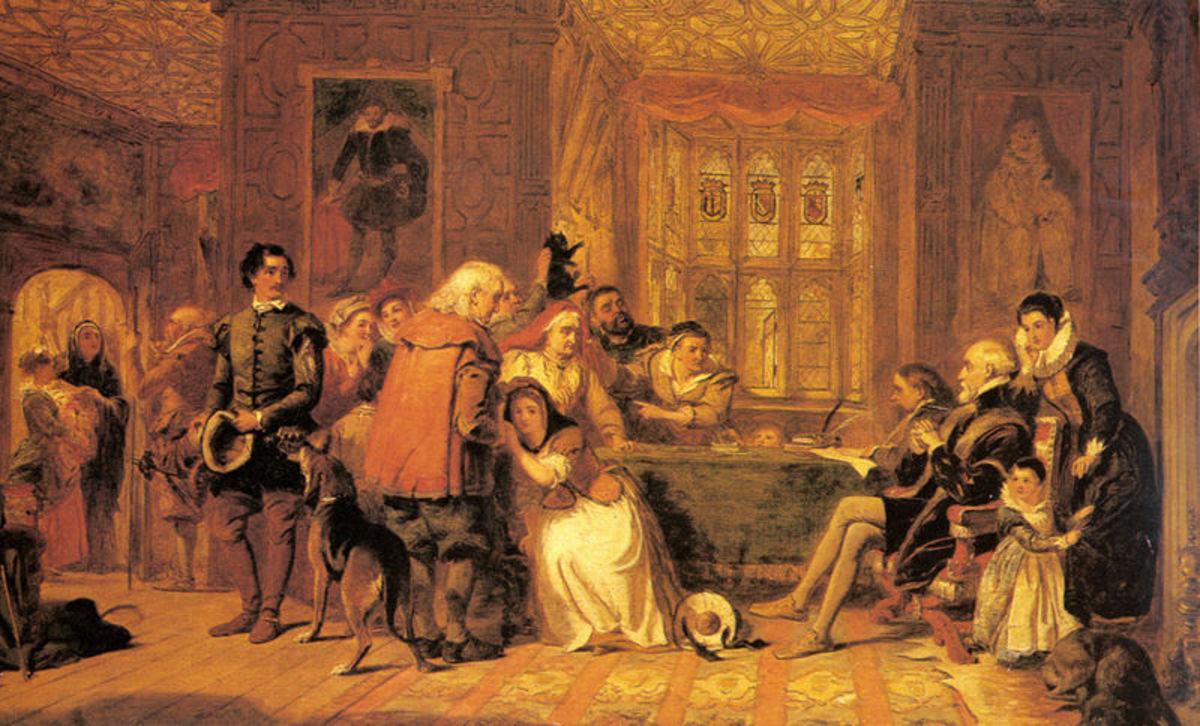 Of course, they didn’t forget to blame American Indians. Some people believe that the colonists’ heightened fear of Satanic forces was due to military insecurities. Afraid that they would not be able to defeat the native inhabitants, desperate to control the unknown, and oblivious to their own hypocrisy (as most of America still is today with regards to indigenous peoples’ rights), the European invaders immediately began equating Native Americans with Satanic beliefs, seemingly oblivious to the fact that it was they who were creating the violence in the first place.

In today’s world, the term “witch hunt” has taken on a variety of meanings, and has been co-opted by feminist, partisan, and pagan communities alike. The “Red Scare” of the 1950s has often been called a “witch hunt,” and the term has experienced a recent public resurgence. President Donald Trump deployed the term when referring to Robert Mueller’s investigation into the possibility of Russian collusion during the 2016 election – which the President called the “single greatest witch hunt in American political history.” (Of course, if it wasn’t already clear from all the violence and persecution mentioned in this article, genuine witch hunts are far worse than anything Trump has faced personally).

You may be surprised to learn that real witch hunts are far from things of the past. People are still being killed for witchcraft each day, and modern witch hunts are a growing international problem.  Some of the worst tragedies have happened in Tanzania, where an estimated 20,000 people have been killed since the year 2000 for practicing witchcraft (a word that often is used to refer to homosexuality). Thousands of women in Ghana live in exile in so-called “witch camps,” and similar persecution is occurring in Papua New Guinea and India.

Why do these witch hunts continue to occur? Witch hysteria happens mostly when the public or ruling powers are seeking scapegoats for inexplicable calamities. It also happens when certain faiths clash with dominant religions, which is happening in Africa largely thanks to the residual influence of colonialism.

In turbulent times, witch hunts can arise when people struggle in the face of adversity – and their leaders identify “enemies” on whom to focus or divert their fear and anger. Climate change, political turmoil, and economic instability are very much the kinds of challenges that can generate such hysteria. Could it be that 21st century America is ripe for another Salem?

Buried treasure, sword fights, and eyepatches – it’s easy to be enthralled by tales of pirates in books and film. But even without the fluff and fantasy of Hollywood’s version,…

True crime entertainment is almost as old as printing. The first known play based on a real-life murder appeared in late 16th-century London. There’s good reason to think the…