Honeybees have always fascinated humans. We have built whole industries out of their products – namely beeswax and honey – and they help keep our agricultural industry afloat. Yet the daily lives of honeybees are also marvels in themselves, examples of nature’s ingenuity and its strangeness. From their unusual methods of communication to their intense, sometimes violent process of finding new queens, bees present examples of parallel worlds as dramatic and complex as our own.

When I arrived back at my childhood home to wait out the COVID-19 quarantine, I was surprised to find a beehive in my backyard.

It belonged to a beekeeper who had asked to use our yard for one of his hives, which apparently had to be kept far away from each other so new queens could emerge. During long spring days, I would sometimes walk outside just to be near it. As time ticked on, and lawnmowers were considered nonessential for the time being, the grass around the small makeshift hive grew wild and tall.

With little human contact to distract me, I began to be fascinated by the honeybees’ lives. I discovered that they communicate through intricate dance moves. They fly hundreds of thousands of miles during their lifetimes, and will visit 2 million flowers in order to make just one pound of liquid gold honey.

These are not aliens or fairy tale creatures. They’re your garden-variety neighborhood honeybees, and they have a lot to teach us about the world and ourselves.

A Window into the Life of the Honeybee

If you’re born to the species Apis mellifera, there are three types of bees that you might become. You could be a queen, which means you can produce eggs (and you rule over the hive from an iron throne). You could become a drone, whose only life purpose is to mate with the queen. Or you could become a worker bee, spending your life flitting from flower to flower, pollinating and doing the exhaustive work of creating honey.

No matter what type of bee you become, you have the same first days of life. Bees are hatched as white larvae who feed on royal jelly. They then spin themselves into cocoons, and develop into their full honeybee selves after spending around nine days tangled up in silk threads. 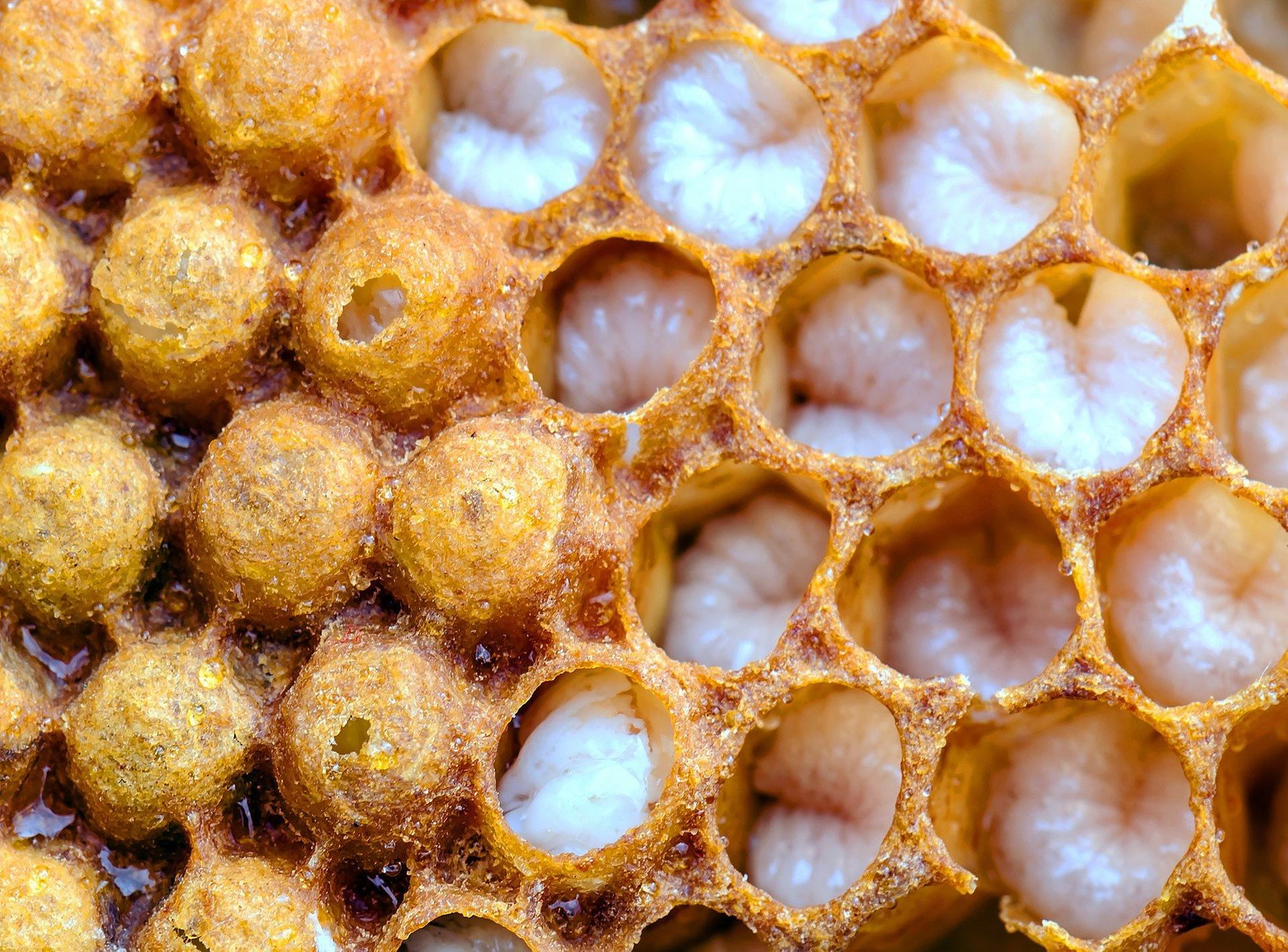 There can be only one queen bee in a hive. They have incredibly powerful stingers that can be used over and over again, and rival virgin queens will use these stingers to fight each other until only one survives.  Potential queens spend their early years locked inside special cells sealed with beeswax. When the new queen is born, she leaves the hive to mate with 12–20 drones, then lays over 2,000 eggs per day. If a queen becomes infertile or dies prematurely, worker bees will create an “emergency queen” by flooding new larvae with royal jelly, which results in a new, albeit typically smaller and less prolific queen.

Every day, queens lay 2,000 eggs or so. Some reports say there are about 80 to a hundred million hives in the world, and each hive contains 60,000 bees, which is a pretty unfathomable number.

But they’re all out there, living their organized, dutiful bee lives, mostly unaware of (though not unsusceptible to) the human drama around them.

Despite their alien-like habits, bees have a lot to teach us about ourselves and the world we live in. For example, bees’ brain chemistry is linked to the job they’re doing, so when older bees start performing a task usually reserved for younger ones, their brains actually start aging in reverse. Scientists are currently researching this process, which could potentially show us how to mitigate the effects of dementia, so maybe ... bees hold the secret to eternal life?

Bees use a complex system of gestures, dances, and symbolic movements to communicate. These movements, known as the “waggle dance,” involve specific speeds and angles that correspond to the location of the Sun and help other bees pinpoint the exact location of food and flowers.

For a long time, bees have filled human minds with dreams of worlds beyond our own, and I’m certainly not the first to be inspired by the strange geometry of a hive. Architects such as Buckminster Fuller liked to see bees and their lifestyles as symbols. According to Jon Kabat-Zinn, a Zen scholar, Fuller liked to point out that “for the honey bee, it is the honey that is important. But the bee is at the same time nature's vehicle for carrying out cross-pollination of the flowers. Interconnectedness is a fundamental principle of nature. Nothing is isolated. Each event connects with others.” 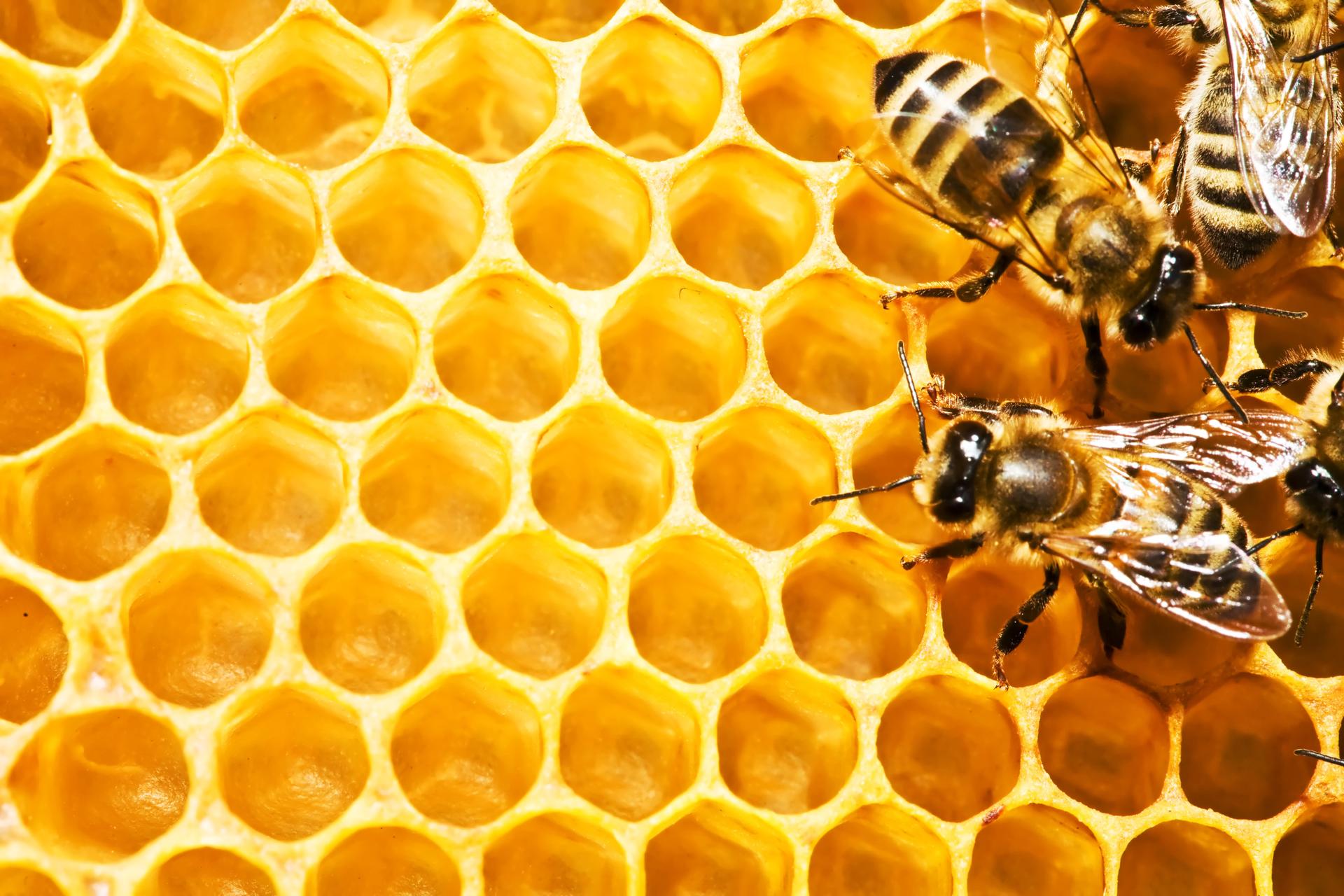 In ancient folklore, bees were often thought of as sacred insects that had the ability to fly between the underworld and our own world. According to the Homeric Hymn to Apollo, the Greek god of the Sun  received the gift of prophecy from three goddesses who had human faces but the bodies of bees. The Celts believed that bees were messengers between realms, and they also believed that humans’ souls transformed into bees during trances, allowing people to walk between worlds. In many Hindu myths, fully enlightened beings are sometimes portrayed as bees perched on top of flowers.

According to the San people of the Kalahari Desert, in the early days of life on Earth, a bee once carried a mantis across a river so it could survive. The exhausted bee planted a seed in the mantis’s body and died, and the seed grew to become the first human.

Whether or not they created us, bees have certainly served us. Their honey has been used as holistic medicine, and their social structures have been used as examples of the success of both capitalism and communism. “One could almost trace the changing cultural fortunes of the ideals of collectivism and individualism and their various ideological expressions solely through a historical analysis of discourses around the meaning and significance of the bee colony,” writes Richie Nimmo.

Are bees examples of the powers of collectivism or the pitfalls of hierarchy and “hive mind” thinking? That’s a doorway to a much larger conversation, but it’s yet another example of the ways that bees’ worlds can contextualize our own.

Can Bees Save the World?

Just like humans, bees are very susceptible to viruses, and their vulnerability to disease has only worsened due to the effects of globalization and trade. Bees also face threats from deforestation and agricultural disruption, pollution, pesticides, and climate change, all of which can damage their carefully coordinated lifestyles. Ecologists advise that we immediately ban the most dangerous pesticides and restore ecological agriculture and wild habitats, so that bees can continue doing what they do best.

After all, bees add $12 – $19 billion to the U.S. agricultural industry each year just due to their pollinating abilities. That activity is vital to the survival of many plants and forests, and about one-third of the food we humans eat grows thanks to the help of bees. Without bees, we’d lose most of the fruits and vegetables we eat.

“The bee's life is like a magic well: the more you draw from it, the more it fills with water.”  —Karl Von Frisch

The good news is that bees can actually help fight climate change, as they’re vital to the preservation of our ecosystems. And, as we’ve seen, they help sustain entire food chains. With more bees and healthier natural landscapes, ecosystems will flourish and humans will have more food security.

Learning from the Bees: Embracing the Wild

The answer to the bees’ plight (and the concurrent plight of the planet and our life on it) isn’t as simple as fostering more honeybees, though. We need wild bees just as much as honeybees, and both play their own important roles in keeping the world running. Wild bees actually face significantly more risk than honeybees, which are often kept afloat by human beekeepers.

“Part of the problem for our native bees is our human desire for neatness and uniformity,” writes Gwen Pearson for Wired. “Pretty lawns with no bare spots. Non-flowering grass, or pollen-less flowers. Paved spots where a sand bank or brush pile may have been before. All places where a native bee might have made her home or found a snack.” 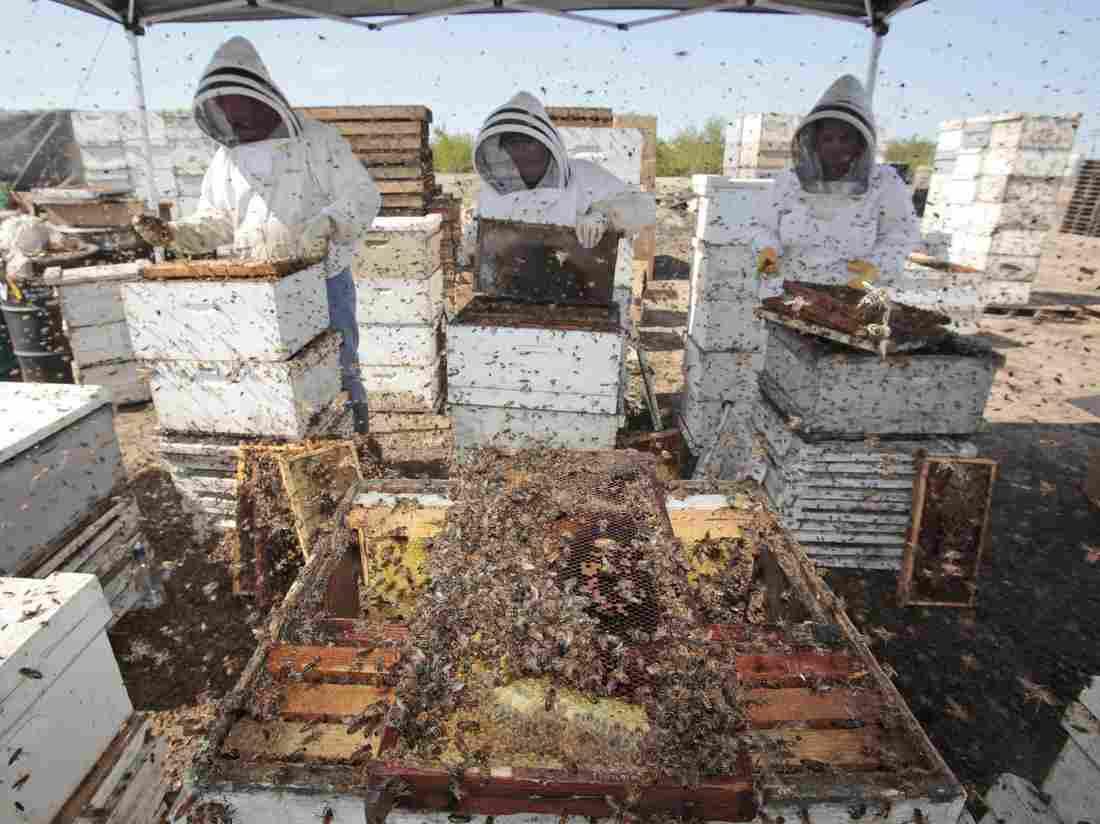 So what lessons can be drawn from all this? Bees show us that the things we humans call beautiful are actually often quite bad for nature (and for other humans). To continue to live on Earth, many of us will have to let go of some things – including wasteful, manicured lawns. We might have to let our lawns grow tall and wild; we might have to let go of old systems of control to make space for something new.

During the months of quarantine I spent at home, the hive managed to generate a new queen. Eventually, my lawn was mowed, and the tall, wild grass returned to its normal, domesticated state.

Still, I think sometimes there is power in overflow, in chaos, and in wildness that might look like a lack of control – in short, in nature as it was created. The bees know this. They pack their hives and travel around the globe all for the sake of doing their small part. Yet the miracle of beekeeping also shows that humans and nature can have a mutually beneficial relationship, if we give and take in a balanced way. 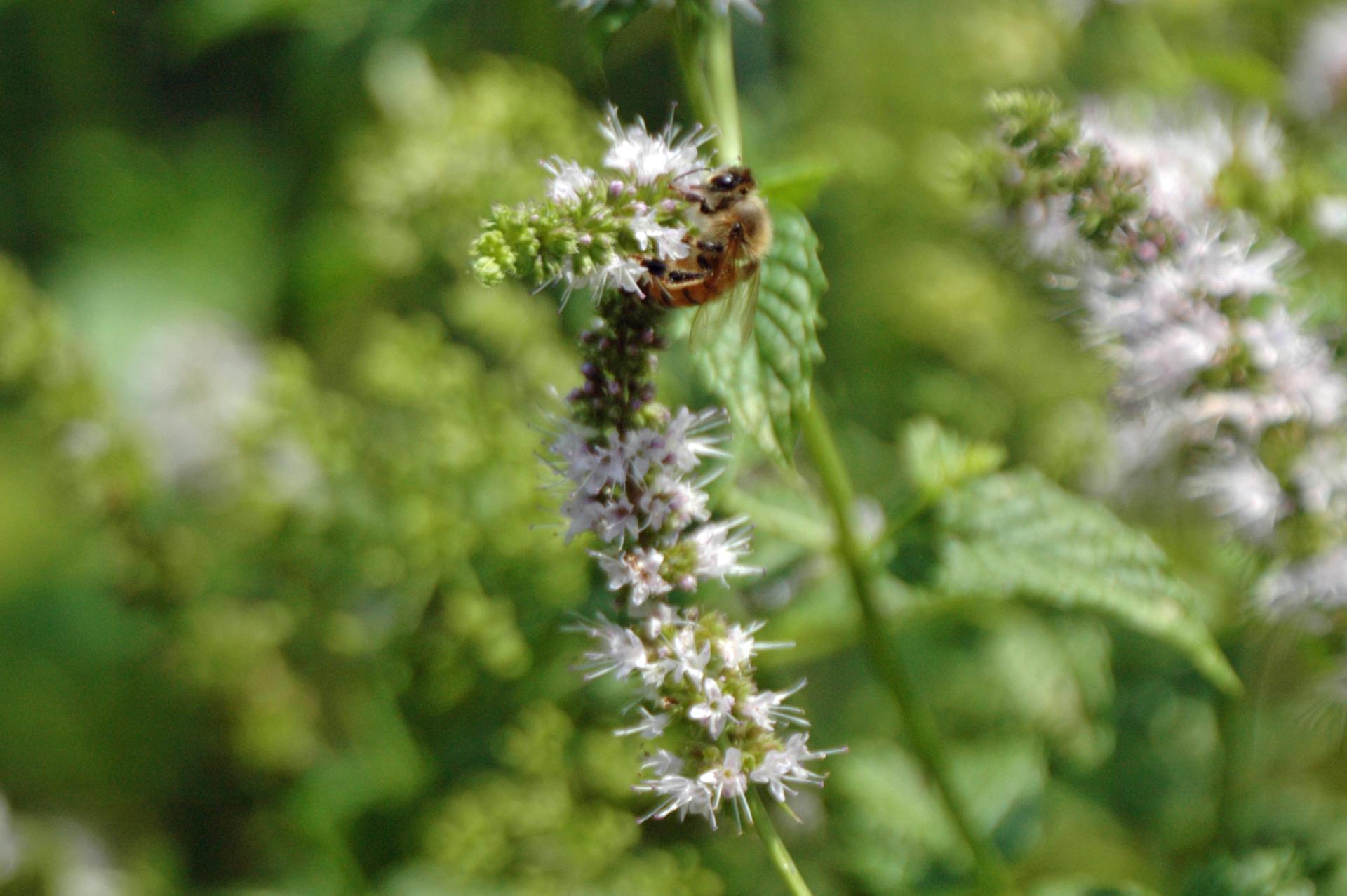 “What I realized was this – that one can’t look inside a hive without also gaining a sense of the world beyond it; and one can’t come to know another creature without becoming changed oneself,” writes Helen Jukes for The New York Times in a moving essay about her beekeeping endeavors. “For a while I wondered if I was becoming beelike; in fact, I now think, the bees had made me more human.”

As we head out into a new world of unrest and revolution, I won’t forget the bees, who seemed to sing during those days of quiet isolation. Perhaps it’s time to listen closer.

If You Build the Pond, Green Frogs Will Come (and Now You’re Responsible)

I started out making ponds for fish and ended up attracting a bunch of green frogs (Lithobates ranidae), which I collectively named Fred. I came to learn that green frogs require…

Charles Darwin is remembered as the father of evolutionary theory, but he wasn’t alone in arguing for the crucial role of natural selection. A lesser known colleague joined him in…