Bottled water has benefits, but discarding bottles presents challenges to our environment. Learn how you can counteract the damage caused by plastic water bottles.

Remember the days of panic buying? They weren’t so long ago. In the early days of the COVID-19 pandemic, consumers across the world stockpiled paper products and bottled water, cleaning out stores as they went. Why these items – especially during a pandemic? While certain paper products (like bathroom tissue) do tend to be highly desirable for homebound people, water is a different story: The pandemic didn’t threaten water supplies.

It turns out people rely on bottled water much, much more than they used to. Even though water supplies were never endangered, people still believed (irrationally) that they needed to create private stashes of water. And the unintended consequences – the tons upon tons of plastic in single-use water bottles – came along with it. Nowadays, many people see bottled water as a necessity rather than a luxury item. But it wasn’t always this way.

In the United States, per-capita consumption of bottled water has virtually tripled since the beginning of this century. While Americans on average each drank 16.2 gallons of bottled water in 1999, by 2020 that amount rose to a whopping 45.2 gallons, the equivalent of 342 standard individual water bottles per person. That’s a lot of single-use plastic bottles! And these numbers are surely set to grow. As of 2018, about 20 percent of Americans said they primarily drank bottled water, compared to a mere ten percent who drank only from the tap.

So, should we celebrate or bemoan the numbers of water-drinkers who are consuming more and more bottled water? A quick look back at the history of packaged water will help reveal more about this major shift in consumer behavior.

For another perspective on bottled water, check out Evian: A Mineral Marvel on MagellanTV.

The History of Water Bottling, from a Prized Source to Mass Distribution

These days, bottled water is marketed to virtually everyone, virtually everywhere. But the history of this commodity goes back to the late 19th century. Back then, rare and valued mineral spring waters were bottled at the site of grand European spas and sold to high-paying customers who desired the purported health benefits of this specialized “treatment” for what ailed them.

The target market for this luxury item barely shifted until the 1970s, when several forces converged to bring these waters to a much broader demographic, though one still based on the image of exclusivity. The cultural shifts affecting primarily Western markets in that era tended toward the simple, the pure and unadulterated, all with the added thrill of “class for the masses.”

Perrier water – and its small, curvilinear, green glass bottles – became the most prominent, and best-selling, example of this trend. With the success of Perrier came competition, first from other sparkling spring water suppliers such as San Pellegrino, and later, in another consumer twist, from purveyors of bottled still water such as Evian. 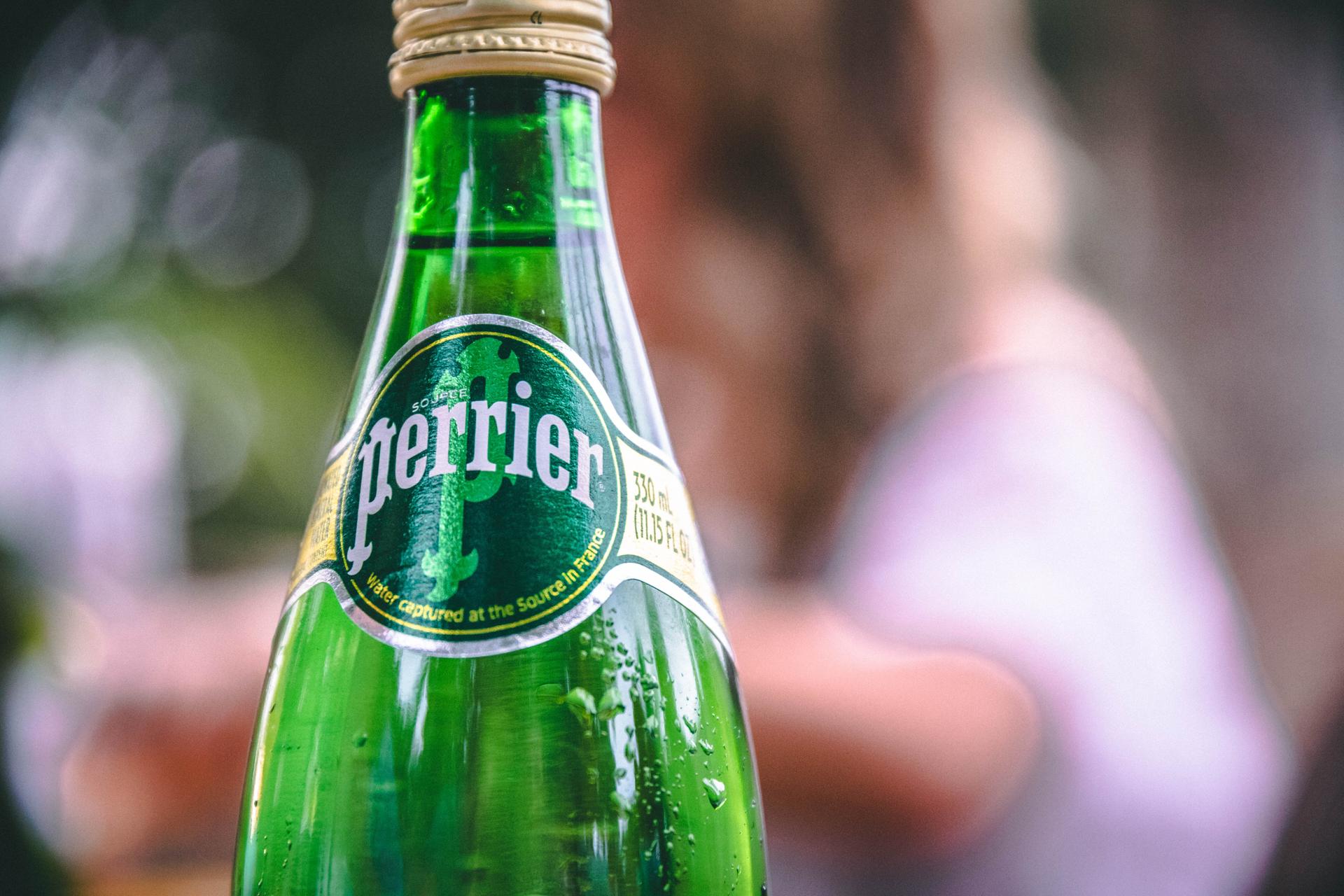 The distinctive green Perrier bottle came to represent bottled water worldwide in the early to mid-1970s.

The mass-marketing of Evian water from its Swiss source to the dining tables of the world represented a victory for marketing. While many Americans of that era were raised with refrigerator-chilled tap water as their go-to thirst-quencher, Evian soon came to be seen as a high-profile, preferred alternative to the municipal water supply that served our homes’ taps.

Changing Behavior from the Late ’70s to Now

Also in the 1970s, and contributing significantly to the growth of mass-marketed bottled water, was the introduction of PET (polyethylene terephthalate) plastics. The innovation transformed a cousin of polyester into an endlessly malleable substance that could easily be put to the use of producing light, cheap, clear plastic containers.

This scientific advance led quickly to enhanced marketing campaigns designed to introduce plastic bottles filled with specially sourced water into every possible scenario. Marketers touted the many advantages of bottled water: It was portable, meaning you could take water on the go wherever you went. It was convenient, matching the increasingly active lifestyles of the Boomer generation. And it was pure, a selling point that immediately relegated tap water to the stone ages. If you cared about your health, you needed to assert a choice for purity, and “purified” bottled water fit the bill with marketing-engineered precision.

By the 1990s, bottled waters began to make a significant dent in beverage sales, and large multinational corporations were anxious to get involved. In that era (and continuing to today), companies sought ways to enter and expand the market. And, as Eastern bloc nations emerged from communism and global capitalism marched forward, new opportunities to expand the bottled water business appeared.

Not only in underserved Eastern European countries, but in developing cultures around the world, bottled water became a symbol of health marketed to people concerned about the safety of water supplies. This was true especially in regions with unreliable access to local freshwater, such as sub-Saharan Africa and elsewhere among developing nations.

Climate change also impacts the availability of potable water in many regions. Long-term effects include desertification and disruptive weather patterns that can make water shortages more likely. The quality of drinking water sources may also be compromised by extreme storm activity.

As the popularity and broad acceptance of drinking bottled water accelerated, bottlers sought out new sources for freshwater. Increasingly, as businesses expanded through mergers and acquisitions, those sources became harder to find, and corporations such as Coca-Cola Company and PepsiCo began purchasing access to municipal water resources. Yes, the same water that flows from our taps started flowing into packaged bottles, and profits shot up like fountains.

A considerable proportion of bottled water sold today – even some of those labeled “spring water” – arrives in our local stores from regional factories utilizing municipal or county water supplies, often at very attractive rates to the companies. And there's little likelihood that multinational corporations will shift their water-collection strategies anytime soon. In fact, water is now a worldwide resource that corporations are approaching in the same way other industries seek oil: with continuous, ever-encroaching forward momentum. 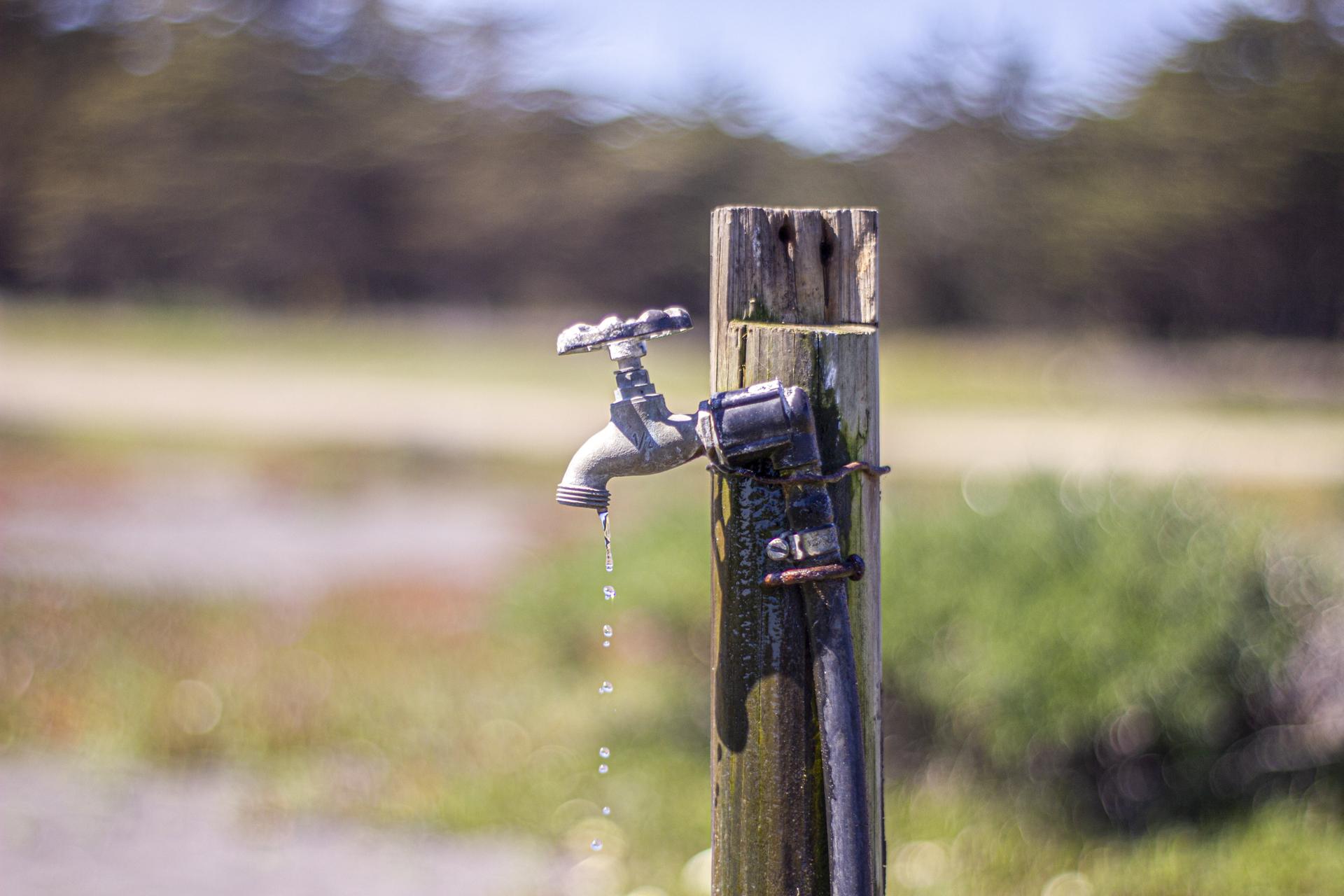 Water scarcity drives many to resort to bottled water for all uses, from cleaning to drinking.

In 2005, the chairman of Nestlé, Peter Brabeck-Letmathe, controversially said to an interviewer for the documentary We Feed the World: “It’s a question of whether we should privatize the normal water supply for the population. And there are two different opinions on the matter. The one opinion, which I think is extreme, is represented by the NGOs, who bang on about declaring water a public right. That means that as a human being you should have a right to water. That’s an extreme solution. The other view says that water is a foodstuff like any other, and like any other foodstuff it should have a market value.”

All the largest multinational corporations marketing bottled water have at least one brand that draws from local groundwater. These include Pure Life (from BlueTriton Brands, formerly Nestlé); Dasani (from Coca-Cola); and Aquafina (from PepsiCo).

Soon after, Brabeck-Letmathe revised his comments, stating that humans deserve a daily allotment of water for survival, and the rest should remain available for economic exploitation. Beginning in 2020, investors could even speculate on the water futures market, listed alongside such existing natural commodities as gold and oil.

The Challenges of Contamination and the Limits of Recycling

Water contamination from pollution and other natural sources threatens the world’s supply of freshwater. Especially in developing nations, but in the U.S. as well, contaminants can include lead, factory wastewater, oil well exploration byproducts, even effluvia from poorly monitored water treatment plants. And, of course, there is the ever-present problem of plastic waste.

Worldwide, only a small portion of plastic water bottles are recycled. In the U.S., only one out of six water bottles end up being recycled. And plastics, including water bottles, are overflowing landfills and winding up in huge quantities in our oceans, contributing to the degradation of our environment. 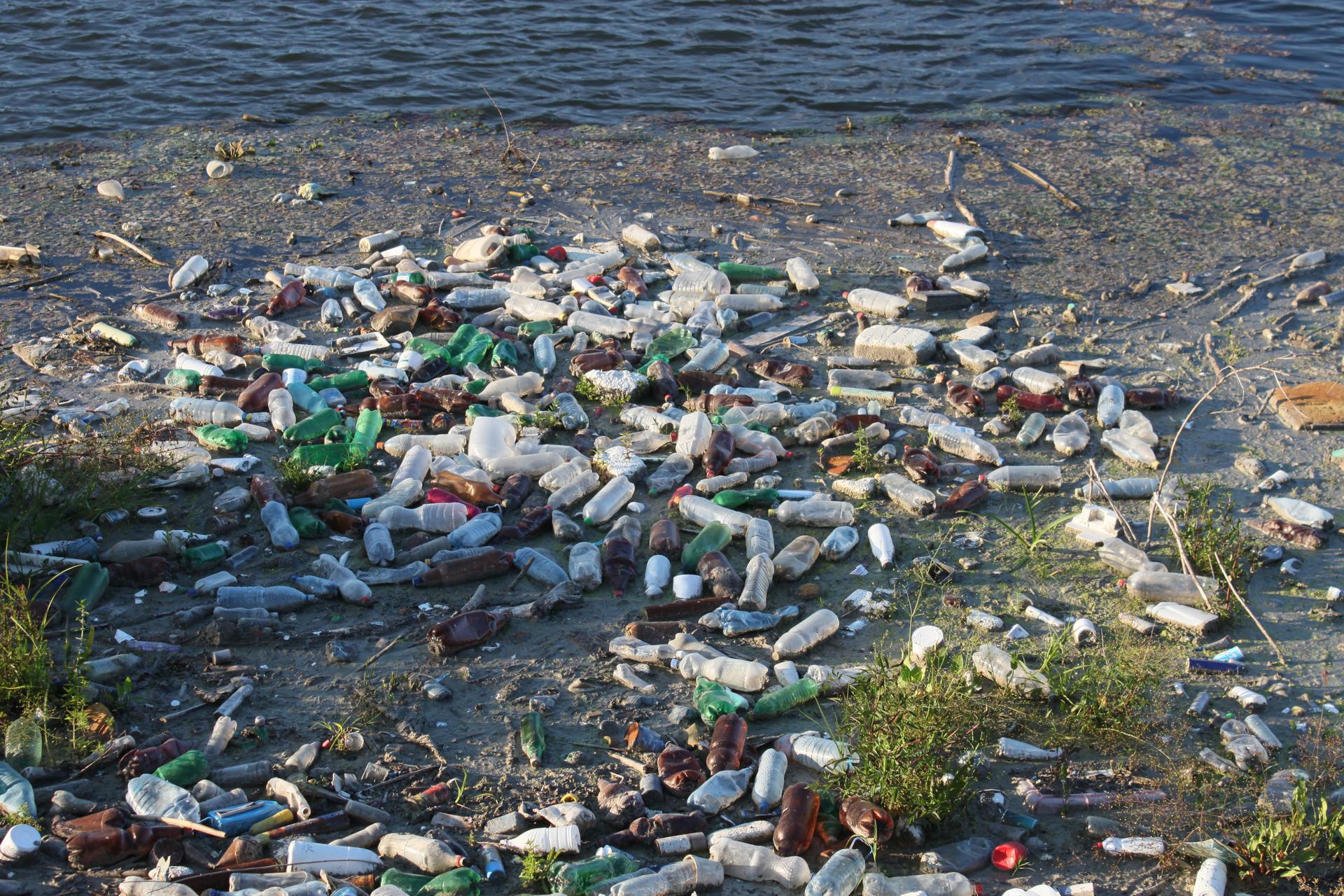 Single-use bottles and other plastics increasingly pollute our waterways. (Credit: byrev via Pixabay)

Misinformation makes matters worse. Many people have been led to believe that the PET used to create individual-sized water bottles is of low quality and thus rejected by recycling centers. This is simply false. The amount of plastic actually sent to recycling plants is much lower than it could be.

So – other than banning the bottling of water, which is practically unimaginable – what are we to do?

4 Tips for Reducing the Impact of Plastic Water Bottles

Given the ubiquity of plastic water bottles in our environment, there are numerous things individuals and communities can do to limit the deleterious impact of plastics on the environment. Here are four for starters.

First, start using your tap as the main source of your daily drinking water. And why not? It’s hydrating, and it’s at least as pure as the bottles of water at your local store.

Second, hold your community’s water utility accountable. Be sure it has been transparent regarding any impurity issues with your local tap water. And, if your utility has a contract to supply water to a bottling company, make certain the company pays a fair rate.

Recyclable plastics – and that’s most of them – are all stamped with a number between one and seven and should all be set aside for recycling. Plastic items with no printed numbers on them, such as flimsy food containers, sadly must go into the trash.

3 – Get a Reusable Water Bottle

It’s a fact that portable water has proven to be a boon to humankind. Personal-use bottles are popular for a very good reason – people just like to have water at their fingertips. So, accommodate your daily needs with a reusable (preferably not plastic) water bottle. It’s virtually as easy to obtain as your favorite bottled water, and you can reuse it every day for close to a lifetime.

If you’re still concerned about the water in your taps, consider getting a water-purifying pitcher or faucet attachment. Then you’ll be drinking water you purified yourself.

Be outspoken about the civic responsibilities of the bottled water industry. Insist that corporations promote recycling effectively – in your community and everywhere they do business. And make certain that companies pay their fair share for the water they divert to make a profit.

If we have to live with bottled water – and it certainly appears we do – we owe it to ourselves and succeeding generations to ensure that companies “mining” our vital resources do so responsibly, even sustainably.

Conservationists are alarmed by masses of floating plastic garbage that endanger our oceans, including one they have dubbed the “Great Pacific Garbage Patch.” Finding new…

Endangered and threatened species face possible extinction. Leading the effort to save them is the International Union for the Conservation of Nature, which publishes the “Red…