For centuries, French fine dining has set the world standard for culinary excellence. Entering the 20th century with a firm foundation in haute cuisine, by mid-century traditions began to be rocked: first with the arrival of nouvelle cuisine, which effectively turned some French culinary standards on their heads, and later by the arrival of “fusion cooking,” which pairs French food preparation traditions with cuisines of other cultures.

Ah, Paris. For centuries this celebrated and sophisticated city, center of culture and finance, has been regarded as the capital of fine cuisine. Over the 20th century, and in particular in the years following World War II, French fine dining – haute cuisine, meaning meals with the most elevated standards – was seen as the ultimate in exquisite culinary experiences. In fact, in the original 1938 edition of the comprehensive guide to French cooking, Larousse Gastronomique, chef and restaurateur Georges-Auguste Escoffier proudly wrote that the history of food “is equivalent to painting a portrait evoking a country’s whole civilization.” (Of course, as it was 1938, nationalism and pride in one’s national heritage was de rigueur among European nations.)

Haute cuisine dining was developed to please the most exacting palates with flavorful food – and a lot of it. Formal French meals could have as many as 17 courses and include a procession of main courses featuring red meat, fish, and chicken. The development of the haute style under Escoffier resulted in greater efficiency in food preparation: a standard meal would start with small bites, an appetizer, fish, main course followed by a salad, then cheese and dessert, each course matched to a libation, primarily wine.

Watch chefs from around the world create appetizing new dishes in Paris.  Now available on MagellanTV!

The French style of cooking, both labor- and flavor-intensive, was adopted around the world, even reaching middle-class 1950s America. Rich, sauced dishes like coq au vin, boeuf bourguignon, and veal cordon bleu became staples of aspirational home chefs. Young housewives sought to please their husbands by bringing a little French technique into the kitchen. In the U.S. there was enough interest in this style to catapult media personality Julia Child, author of the influential Mastering the Art of French Cooking, to stardom with her popular and beloved television series, The French Chef.

But there was a huge problem. Cooking in this style often wasn’t easy or simple at all. And home chefs attempting to master the dishes found quickly that some things were better left out of the hands of amateurs. To properly prepare old-style haute cuisine recipes, it’s best to have a professional kitchen, a home feature that was beyond the imaginations, and certainly the budgets, of those mid-century housewives.

Classic French cuisine demands specialization in numerous distinct areas, none of which is really set up for do-it-yourselfers. Here’s a quick overview: 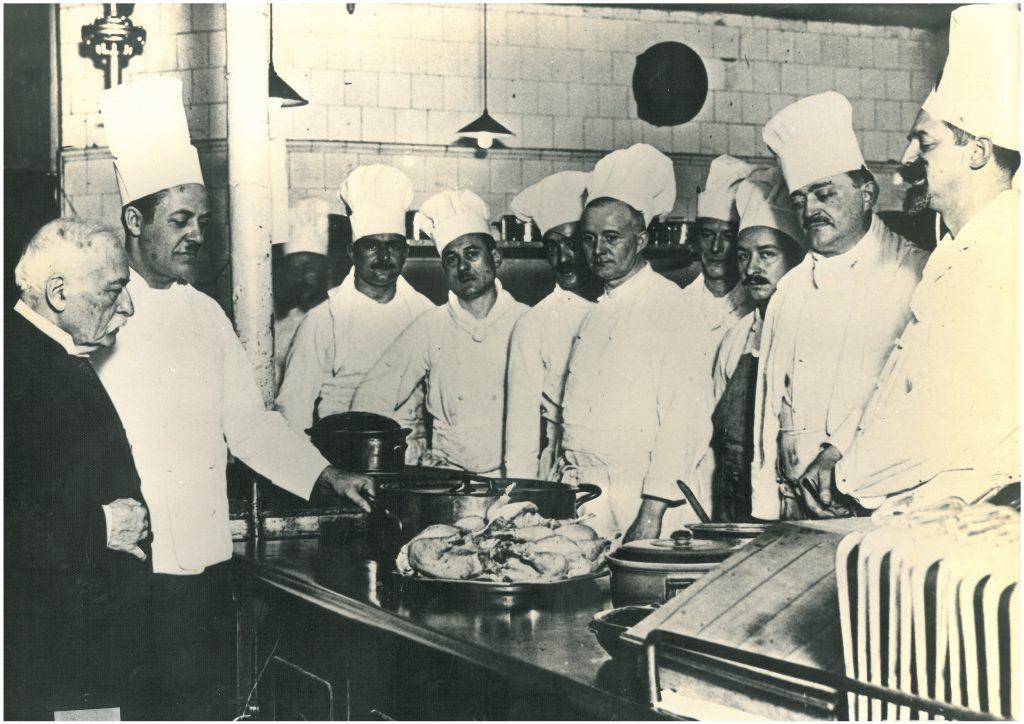 Georges Auguste Escoffier (l.) reviews a main dish prepared by his "brigade" of chefs at the Carlton Hotel, which opened in London in 1899. (Image Credit: ARTE TV)

This “assembly line” approach to constructing plates overbrimming with glorious food may have been inspired by Henry Ford; its introduction in professional kitchens brought wait times down considerably and allowed for commercial dining establishments to turn more tables – and hence turn more profits – without affecting the quality of this haute cuisine.

But as lifestyles began to change in the 1960s and beyond, the trend toward lighter, simpler, more healthful dishes began to climb in popularity. Multiple heavy, sauce-laden dishes came to be seen as excessive, outdated. And the grand restaurants and chefs of French haute cuisine began to adapt their dishes – and their thinking – to the times.

The Introduction of ‘Nouvelle Cuisine’

Haute cuisine techniques – and the preparation time involved – made this style unwieldy to home chefs, even in posh French kitchens. And so, a new style was proposed to fit the more mobile and active lifestyles enjoyed by home chefs in the “Space Age” 1960s. Preparation times needed to be reduced to allow for the Madame’s other activities, including working outside the home. And preparation techniques had to be streamlined so it didn’t take years of training at Le Cordon Bleu to cook a family’s evening meal.

In 1969, a group of French food critics led by Henri Gault and Christian Millau began to publish a guide to French restaurants called Le Nouveau Guide (later changed to Gault Millau). It promoted restaurants and chefs around France who were breaking the rules surrounding haute cuisine and presenting food without heavy sauces in aesthetically pleasing arrangements.

As the Guide rapidly became more influential, and somewhat controversial, Gault published, in 1973, what he called a “manifesto” titled “The 10 Commandments of Nouvelle Cuisine.” This polemic was designed to shake French chefs from their hidebound devotion to the traditions of haute cuisine. Despite pushback, the trend can fairly be said to have taken over the culinary world in the decades following its publication. Around the globe, chefs have embraced lighter and more healthful cooking procedures that highlight the natural flavors of the main ingredients. 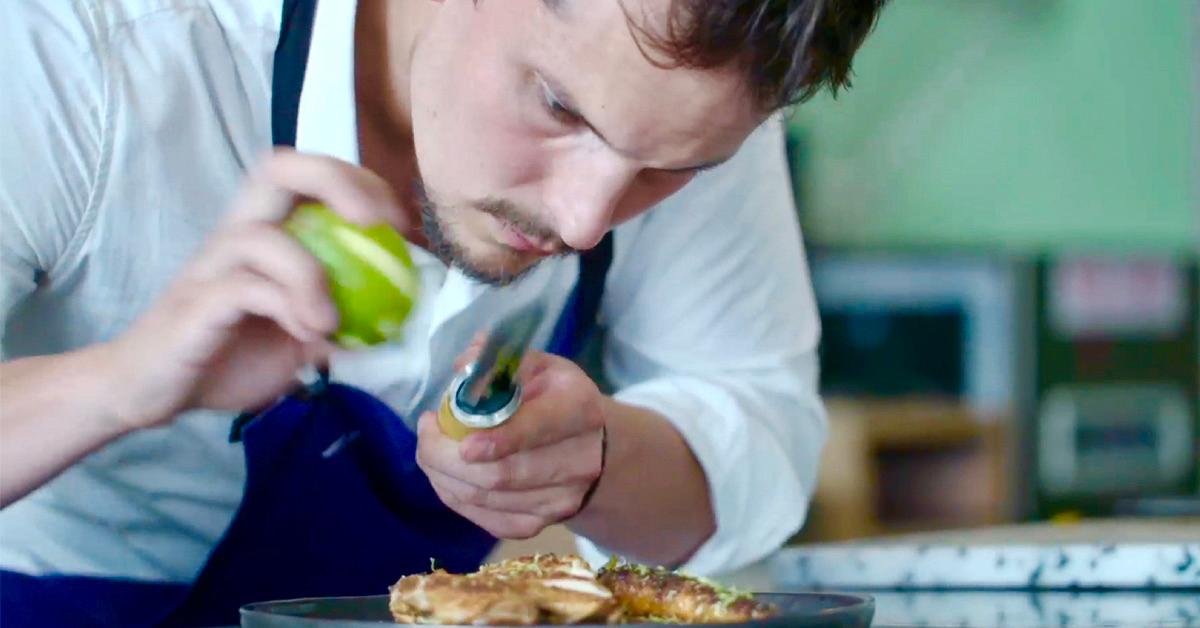 Contemporary international chefs bring the rigor of French technique to flavors from around the world.

Where a haute cuisine menu would include sauces for numerous dishes including both vegetables as well as entrées, nouvelle cuisine would tend to avoid the unnecessary heaviness added to dishes by fats, sugars, starches and salt. A nouvelle presentation might include a meat roasted and served in its own juices to preserve the natural flavors and textures of the food. And the vegetables might be presented puréed, the better to savor all the complexity of their flavor.

The standard French table etiquette of hands resting atop the dining table often comes as a surprise to Americans, who are taught to rest their hands in their laps. Why the French twist? It started in medieval times and was meant to assure other diners they weren’t armed!

In 2018, the Gault Millau organization updated the “10 Commandments” to simplify and make even more relevant their prescriptions for contemporary cuisine. The revised rules for today’s “New International” chefs include:

How ‘Nouvelle Cuisine’ Updated Kitchens in France and Around the World

Nouvelle cuisine chefs, including such stars as Paul Bocuse and Michel Guérard, broke with tradition in their French restaurants, combining classic French techniques with remarkable variations, highlighting new choices in spices and flavors. Bocuse is especially well known for his innovations, influenced in part by his experiences with Asian cooking:

Rather than repeating recipes of the past, nouvelle chefs improvised novel creations in trend-setting new dishes. This was the dawn of celebrity chefs, whose approach to fine cooking made them household names in many parts of the world, especially in food circles.

Many innovations introduced by these chefs into modern kitchens worldwide are now standard practice. Nonetheless, there was a reaction in the mid-1980s against the voguish nouvelle style, with several prominent chefs declaring it “out of ideas.” Amid the backlash against the dominance of the French style, “fusion” was born. Leading chefs were inspired to blend their French technique with ingredients and approaches that reflected a new internationalism in the world culture of the 1990s and beyond.

‘Nouvelle’ Meets ‘Fusion’ and the Evolution to ‘New Internationalism’

Today, some of the most exciting trends in fine dining result from dedicated chefs who layer flavors from around the world alongside classical French techniques, resulting in new taste combinations that sustain the spirit of nouvelle cuisine while respecting older traditions. Fusion is now the basis for the most contemporary advances in the so-called “new international” style, which emphasizes the chef’s native background blended with French technique. 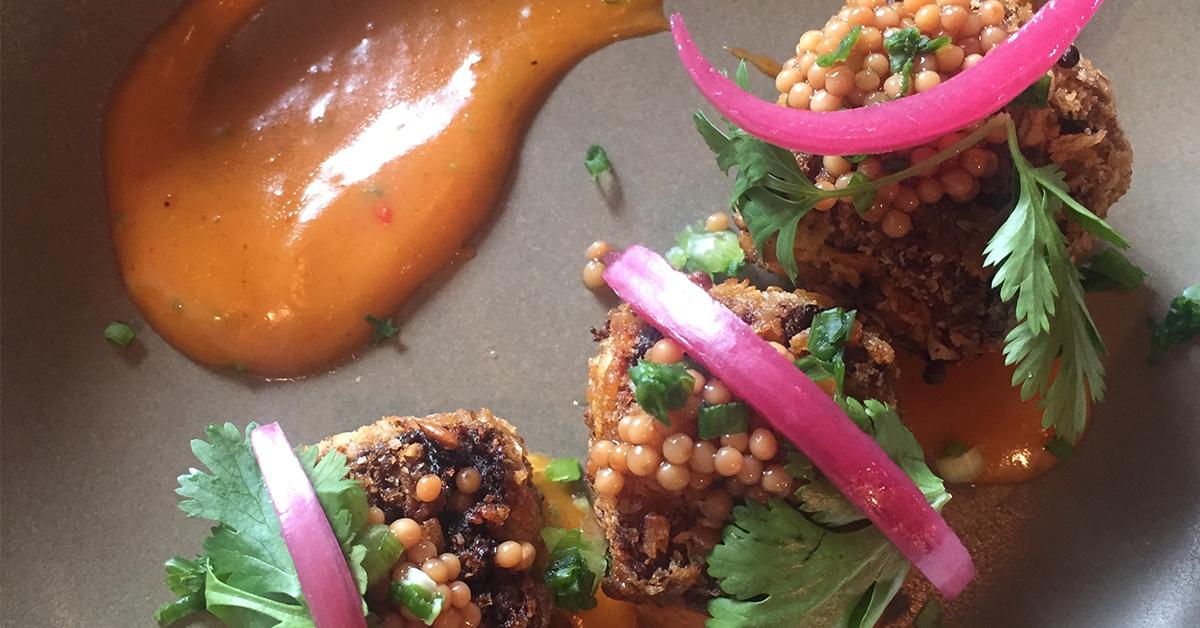 Fusion cuisine offers the rigor of French technique suffused with a rich melange of flavors from around the world.

Fusion cuisine came into prominence toward the end of the 1980s. At first, Asian-French blendings were in vogue, but in recent years, other nations’ food cultures have been incorporated into fusion successes.

Eric Ripert, the international star of contemporary trends in fine dining, stated that the array of choices available continues to refer back to classical French methods and even philosophy: “It’s ultimately about creating a harmonious dish that elevates the quality of the main ingredient,” he says. And the range of main ingredients has only been enhanced over recent years, with spices and even main dishes sourced from cultures all around the globe.

A quick four tips for fusion cooking: Know your ingredients; know your techniques; practice restraint; and, importantly, practice on yourself first!

Today, serious professional chefs around the world who have been trained in classical French technique are choosing to blend these influences with the traditional cuisine of their native countries. They are committed to using the French idea of a harmonious layering of separate flavors that both support and enhance a main ingredient, while working with diverse regional inspirations. Coming from across the globe, these “New International” chefs enliven the cuisines of such locales as Greece, Argentina, and South Africa with the intensity and dedication of classical French chefs.

A ‘Nouvelle’ Technique You Can Use at Home

Now that you’ve learned a little bit about these trends in French cooking, perhaps you’d like to try your hand at preparing a meal to have at home. It’s not as hard as you might imagine, especially in the nouvelle style. A technique that creates a rich and flavorful sauce without all the butter and cream of the haute cuisine style is the déglacer approach to saucing foods prepared in a skillet.

First, of course, you will need a good pan in which to sautée the main ingredient – say, a nice cut of beef. (You do have a pan, don’t you?) Once ready, remove the meat from the pan – what remains will be the cooked and burned bits as well as the juices left by the beef. Add a few ounces of French wine, perhaps a Burgundy or other flavorful red, to the mixture in the pan and heat to a boil. Then, remove the pan from the heat. Et voila! You’ve made a déglacer sauce!

Pour the contents, including the browned juices and fats at the bottom of the pan, onto the previously prepared beef (or provide the sauce on the side). The déglacer is guaranteed to add a savory element to the dish, without all the heavy calories of a cream sauce.

Promoting her new cookbook on a Boston TV station, Julia Child was offered her own show and soon became a star. Her sense of fun and warm personality inspired millions to take up…

Comfort foods offer many (psychological, if not physical) benefits. The dopamine release made possible by these foods confers rewards like pleasure, stress relief, and warm…

Body fat is often scrutinized when evaluating health and diet, but what exactly is it? Fat cells provide nutrients, and regulate temperatures and hormonal changes in the body.

The first known coffee drinkers were Sufi mystics in Yemen, who used coffee to stay awake during their long prayers. Since then, coffee has held a prominent position in Islam,…