The pitches and rhythms of sound can be shaped into music that encompasses every human emotion and brings people together across time and space. Now, important new research indicates that sound has an amazing capacity to heal a variety of mental and physical illnesses. Autonomous sensory meridian response (ASMR) is already being practiced by many people as a form of relaxation and meditation, and other novel sound therapies show promise for treating ailments as diverse as Alzheimer’s disease and depression. It might even be effective in painlessly curing children’s cancers.

As a musician and lifelong lover of music, I’ve long been intrigued by the idea that music might actually be able to heal. I knew that a certain David Bowie song made me feel like my soul was absorbing the first rays of light after a long winter—but I always wondered, why? Why do some sounds just feel so good to listen to?

I became even more intrigued by how sound can help heal us when I stumbled upon a Tibetan singing bowl store in the woods while on a road trip in Upstate New York. There, listening to the different sounds emanated by each bowl, I began to feel that there was something powerful, even profound, in what I was hearing. Later that year, I met a sound therapist in New York City who clued me in to some of the amazing powers of sound to improve our lives.

As I have learned, sound has been utilized as a form of spiritual healing for thousands of years, with many religions and ancient indigenous cultures using mantras and vibrations to access higher spheres of consciousness. Now, science and faith are converging, as more and more studies reveal that certain vibrations can actually alter the shapes of our brains. They might even combat some of the most difficult diseases to crack, including Alzheimer’s and cancer, as detailed in the documentary Sonic Magic.

So how does sound heal? To answer that question, let’s look a little bit closer.

The Physics of Sound

To understand how sound might be able to treat a wide variety of ailments, from insomnia to dementia, let’s start off with a little physics. (Don’t worry, no actual numbers here.) When you examine the physics of sound, it’s surprising how similar everything seems to the big, overarching ideas proposed by fields like philosophy or religion.

According to String Theory, one of the most widely discussed ideas in modern physics, everything is constantly vibrating. Electrons vibrate as they revolve around the nucleus of an atom; planets vibrate within galaxies that circle vibrating suns. All forms of energy are constantly putting out vibrations. And since sound is also basically a vibration, that means the whole world is sound. It’s almost like the Universe is being plucked into existence by some cosmic harpist.

“If you want to find the secrets of the universe, think in terms of energy, frequency and vibration.” — Nikola Tesla

Sound vibrations reach our ears by traveling as waves. Each wave is composed of harmonic frequencies (ranging from very high to very low) that blend together in our brains to form a single, cohesive noise. These waves pass through every part of our bodies, affecting us right down to our cells; and our bodies themselves are made up of sound waves, which constantly interact with the sounds around us.

Sound as Therapy and Healing

So what does this have to do with health? Everything, it turns out.

In a healthy body, internal vibrations are believed to form a balance akin to a symphony playing perfectly in tune. But intriguing research reveals that ill bodies are vibrating “out of tune”—essentially, their vibrations aren’t aligning; instead they’re clashing like orchestra members who aren’t in synch.

A lot of this research was developed by Dr. Peter Guy Manners, one of the earliest pioneers in the field of sound healing. In the 1950s, Manners developed the “Cymatic Instrument,” which was capable of projecting hundreds of different combinations of frequencies, calibrated to strengthen individual parts of the human body.

Another early pioneer was biophysicist Gerald Oscar, whose research in the early 1970s revealed that when different tones are played in each ear, the brain automatically creates another one called a binaural beat. This reveals that sound has the ability to link brain waves in both hemispheres, in a phenomenon called “brainwave entrainment.” 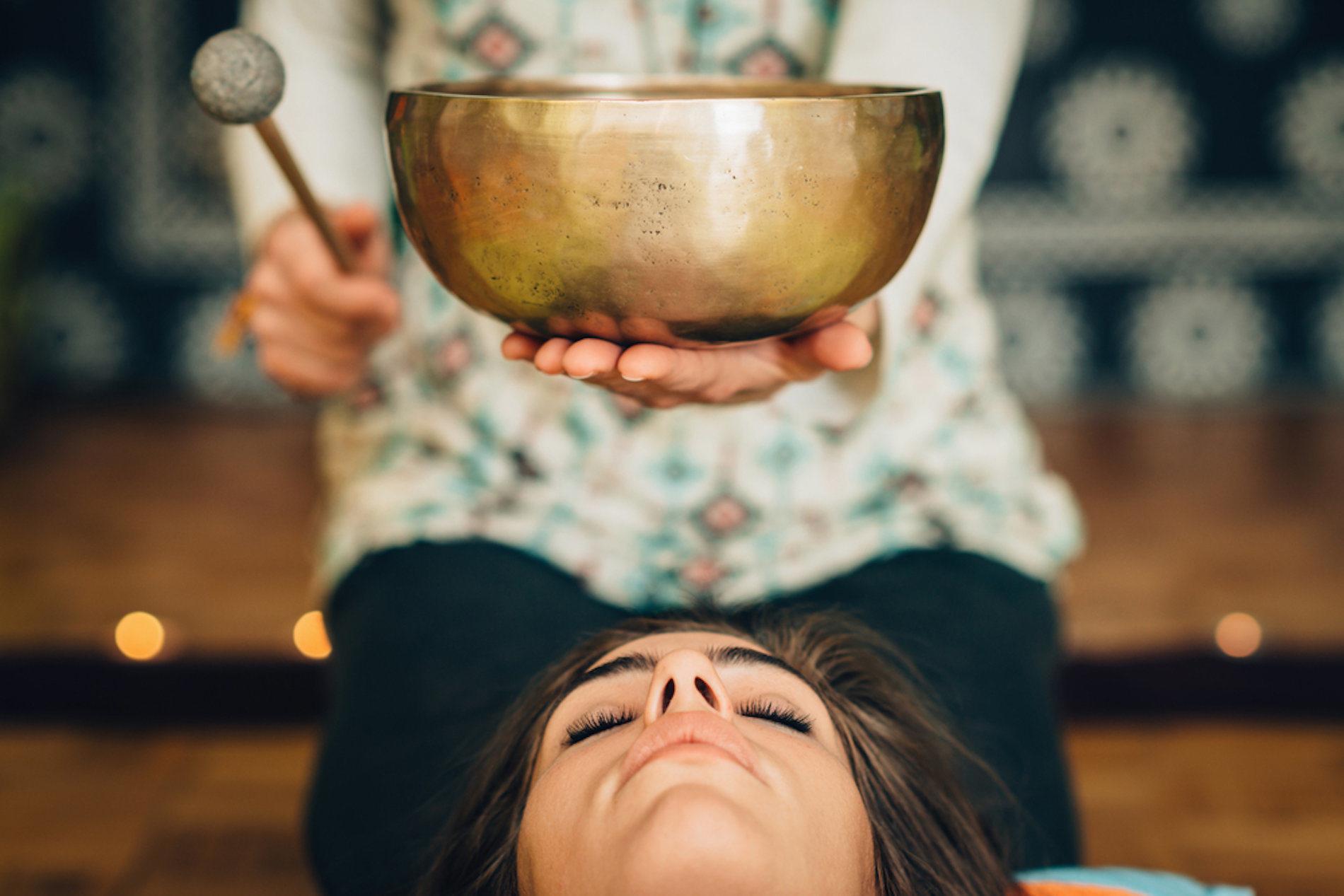 Jeffrey Thompson, founder of the Center for Neuroacoustic Research, is using what we know about sound vibrations and binaural beats to try and re-balance vibrations that are out of whack. He uses a vibroacoustic sound therapy table, saturating patients with different frequencies to pinpoint various densities and problems. “As the frequencies slow down...you feel it more in your muscles, then your joints, then in your bones,” he said. “We can give a vibrational massage, down all the way to your cells. I can do cranial work with sound, work on organs. You’re finding frequencies to elevate the body’s cells to a super-healing state, rebuilding more tissue.”

Having learned about the effects of vibrations, now we can get into the nitty-gritty of how sound is actually used to heal. A large number of modern therapies have focused on sound’s capacity to treat everyday issues like headaches and stress. Though the idea of using sound baths, singing bowls, and tuning forks to relax sounds pretty New-Agey, these kinds of therapies are supported by an increasingly persuasive body of scientific evidence.

Some of the most common modern practices of sound healing include: 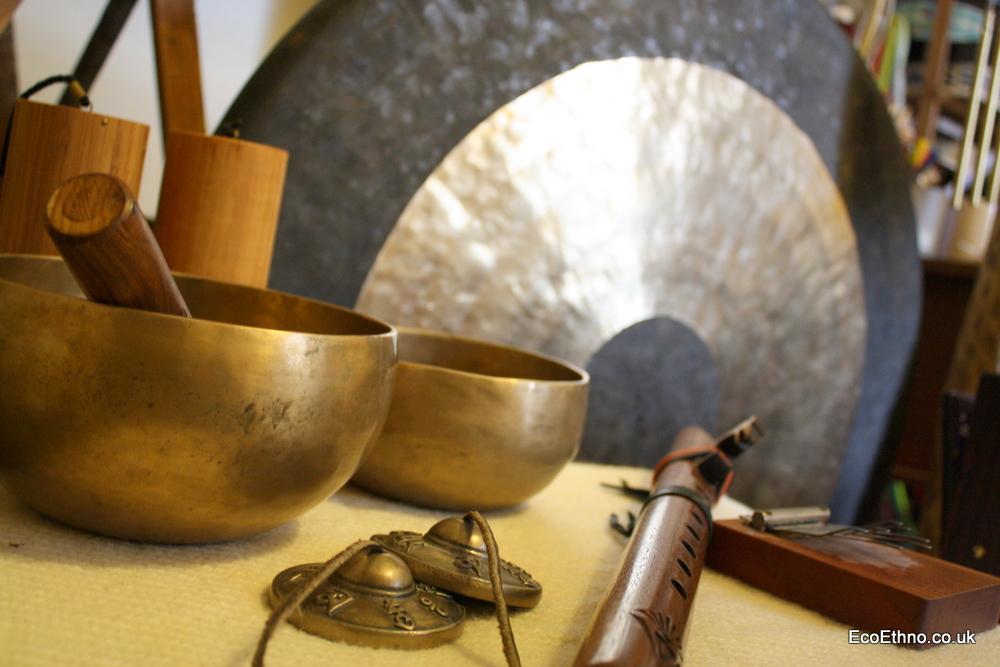 Sound as a Cure for Cancer?

Sound is also being used to treat life-threatening illnesses. In 1981, the biologist Helene Grimal partnered with the composer Fabien Maman to study the effects of sounds on cancer cells. They exposed these cells to the human voice, gongs, guitars, and xylophones, and ultimately observed that all the instruments—especially singing—were effective at destroying the structural composition of these cells. As Maman writes in The Role of Music in the Twenty-First Century, “Cancer cells cannot maintain their structure when specific sound wave frequencies attack the cytoplasmic and nuclear membranes. When the vibratory rate increases, the cells cannot adapt or stabilized themselves and die by disintegrating and exploding.”

These findings have been confirmed by several other studies, which showed that when just the right combination of frequencies were unleashed on cancerous cells, they shattered—in exactly the same way you’ve probably seen videos of wine glasses shattering when hit with particularly high levels of sound. 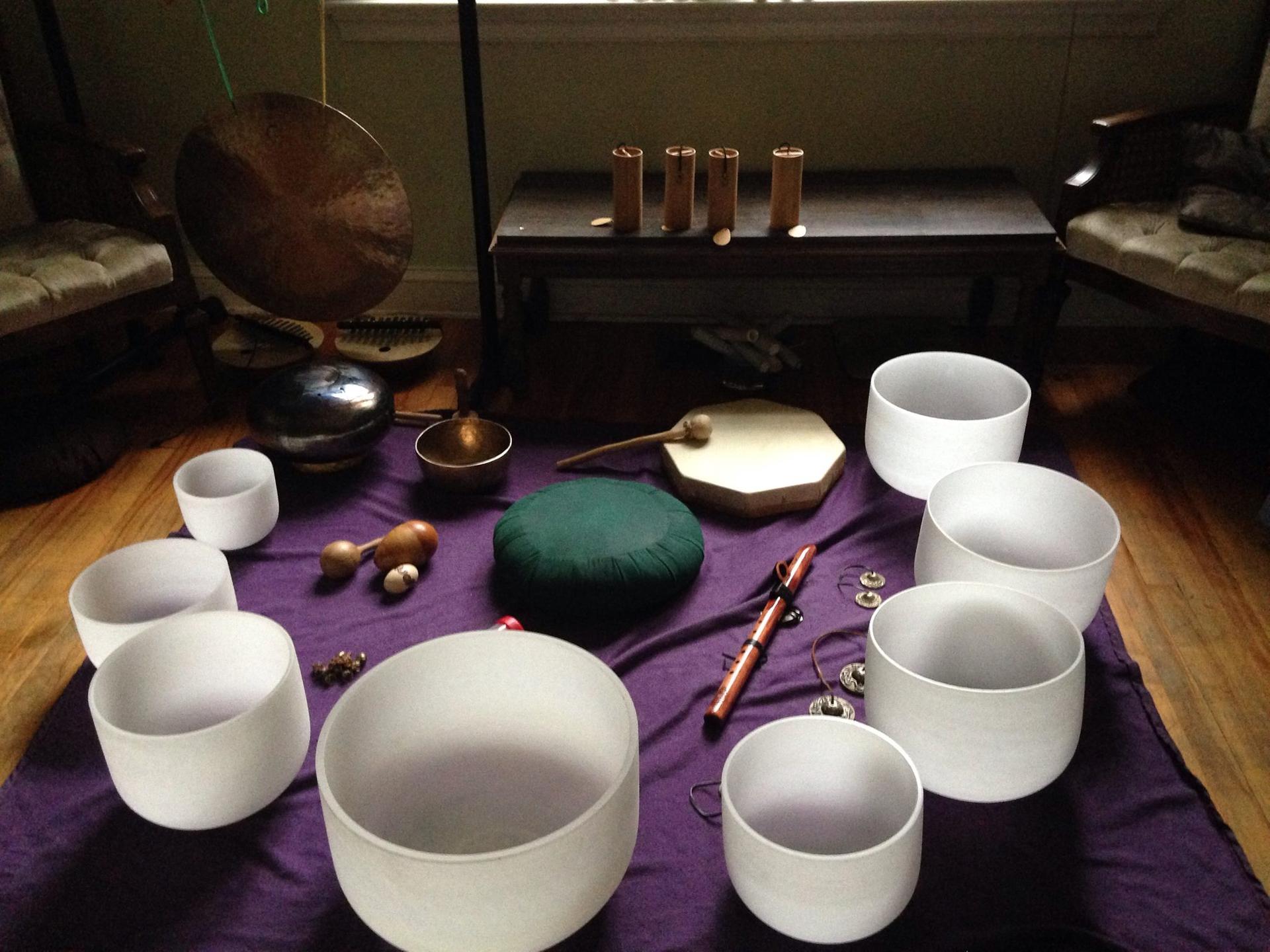 Much of this research has been conducted by Professor Anthony Holland, a musician-scientist at Skidmore College who, in a recent TEDx talk, discussed his success using high-frequency vibrations to destroy cancerous cells. He said,

“I now believe that the future cancer treatment rooms for children will be a very different place. It will be a pleasant place where children gather and make new friends. They probably won’t even know they’re sick. They’ll draw pictures, color in their books, play with their toys, all the while unaware that above them beautiful blue-pinkish plasma lights are emanating healing, pulsing electric fields, shattering their cancer painlessly and non-toxically one cell at a time.”

Other scientists, such as physicists at the Sunnybrook Research Institute in Toronto, are attempting to treat cancer by channeling waves directly into patients’ heads. They are using specific ultrasound technologies to parse apart the cells of the blood-brain barrier and streamline medication as it enters the brain.

In addition to attacking cancer, specific sound frequencies have been found to be influential in curing afflictions like Alzheimer’s disease. Research has shown that Alzheimer’s patients showed improvements in thinking and memory after being exposed to low-frequency sound vibrations. This returns to the vibration concept we discussed earlier—the idea that a healthy body vibrates at a specific frequency. By exposing sick minds to specific, balancing frequencies, improvements can be seen in everything from PTSD to autism to depression.

Modern scientists are really only beginning to understand how effective sound can be as a healing instrument, but indigenous culture and ancient religions have understood this concept for thousands of years. For example, people in Ancient Egypt, stretching back as far as 4000 BC, used certain vowel sounds in their sacred rituals. They believed that those vowel sounds were sacred and even banned them from their everyday language. And in Ancient Greece, Pythagoras proposed that all planets emanate frequencies that mirror the notes on the musical scale—a conclusion that modern physics has also recognized.

“In the beginning there was sound. Sound began the whole thing, and in sound resides tremendous power. It opens doorways to other realities, for with the production of sound, energy can move from one system to another.” – Barbara Marciniak, from “Earth: Pleiadian Keys to the Living Library”

If all this sounds like magic, somehow incompatible with the way we understand our daily realities, in a way, it is. But embracing the potential in sound healing might be the key to cracking medical mysteries that have confounded us for centuries, as well as helping out with some of our everyday challenges.

For now, sonic healing is made up of more questions than answers. Sound is so intangible and mysterious; though we can record it, it leaves no real traces, and there’s so much we don’t yet know about its ability to heal.

But here’s one thing I know for sure: When I listen to the first few bars of “Space Oddity,” there’s some sort of cosmic magic going on. And by the looks of it, there’s sonic magic all around us—we just may have to listen with more than our ears.

What Is the Elevator Game and How Do You Play?

Urban legend or portal to another world? The Elevator Game purports to blur the lines of reality for players, if they follow the rules and don’t make a potentially fatal mistake.…

‘Do Something’: Cutting Your Risk of Cancer One Step at a Time

Many cancers have been shown to be related to lifestyle. To combat the risk, and to improve health, try changing a few habits. It may seem like a lot, but compared to the risk of…

Our unconscious mind controls many of our actions and our thoughts. But science-backed methods of influencing our brain, such as meditation and visualization, can put us back in…