Fantastic discoveries about the universe seem to arrive almost daily, as astronomers study enormous objects hundreds of millions of light years from Earth. But before examining our huge universe, astronomers first studied a very small one. Only through centuries of observation, extensive data collection, and a persistent curiosity about why the best models of the cosmic order didn’t always work, were the fundamental laws governing the movements of the planets and stars revealed.

In September 2020, astronomers reported reviewing deep space images from the Hubble observatory that revealed evidence of a missing factor in our understanding of dark matter, the unseen force that physicists theorize exerts a powerful influence on the visible universe.

Dark matter, because it does not interact with light, can only be detected by the pull it has on visible matter. While scientists are certain it exists, theories on how it works in undergirding the universe are subject to constant revision as new understandings modify a growing body of knowledge.

The Hubble observations of several galaxy clusters – the structures that exist when dark matter binds hundreds of galaxies into a single gravitational mass – revealed that the gravitational force of relatively small dark matter nodes are ten times stronger than theorized.

This finding was determined by the oldest method of astronomy, simple observation. Dark matter’s tremendous gravity can bend light to form a space/time optic strong enough to magnify some of the most distant objects in the universe, a process called gravitational lensing. Astronomers were surprised by just how much detail of the distant universe the dark matter lensing revealed.

Says senior Hubble study theorist Priyamvada Natarajan: “There is a feature of the real universe that we are simply not capturing in our current theoretical models.”

This is, of course, how science works, a constant testing of theory using the best and most recent data. In astrophysics it has led human understanding toward the edges of the universe, across billions of light-years, and a vastness of space that holds innumerable stars.

Ancient Observations of a Tiny Universe

Before we could get there, human understanding first beheld a very, very small universe. The Earth was absolutely the center of everything, orbited by the Sun, which sailed about 100 miles overhead. The more distant planets, heralds of Fate, wandered under a cover of heaven dotted with holes to allow the light of the divine to shine through.

How we got from tiny to nearly limitless is a story more about patient observation, and a rigorous examination of data, than of astounding discovery. Great breakthroughs, when they do occur, happen only when someone realizes the rules used to explain the observed universe no longer apply.

Ancient Western cosmology, best articulated in the works of Aristotle, held that the Earth was immobile, orbited by the Sun, Moon, and the five visible planets: Mercury, Venus, Mars, Jupiter, and Saturn. The Sun, because it made a complete overhead transit in a day, was thought to be the nearest (which is why Icarus paid a heavy price for flying too close to it with his wax wings). The Moon, also nearby, was understood to be illuminated by the Sun, while all the planets revolved at constant rates around the Earth in exact circles – a perfect, eternal order. 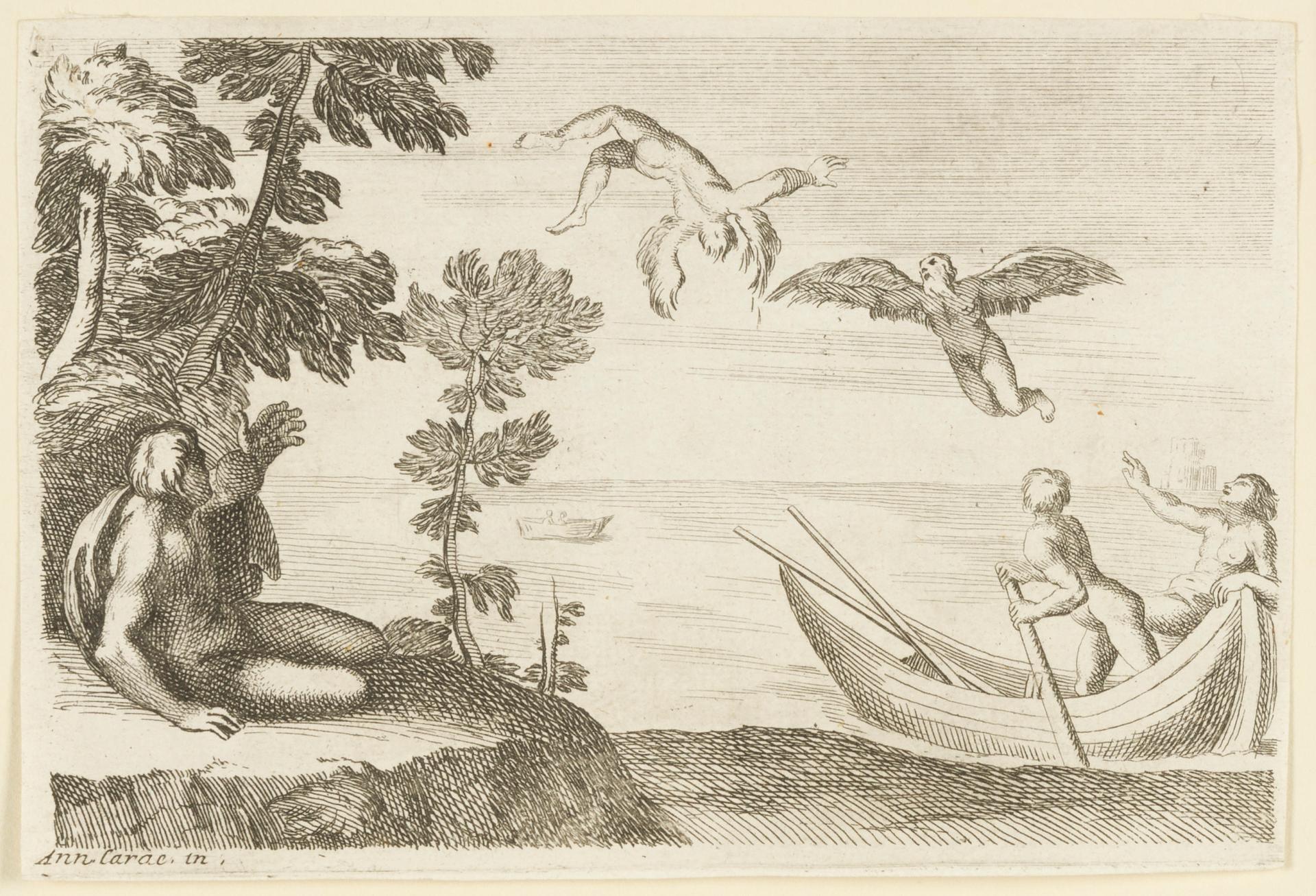 A 17th century print of the Fall of Icarus. (Image Credit: National Air and Space Museum)

But even then, simple observation revealed certain problems. Astronomers, who mainly paid attention to the night sky for information related to events on Earth, noticed that both Mercury and Venus never appeared more than, respectively, 28 and 48 degrees away from the Sun. More puzzling were the frequent periods when, except for the Sun and Moon, each planet stopped its forward progression in relation to the fixed stars, and backed up for a while before moving ahead again – what’s called in modern astronomy “apparent retrograde motion.”

Aristotle’s Cosmos Had Many Moving Parts

These and other strange events – the occasional comet for example – needed some explaining to fit into a perfect framework. To do so, Greek astronomers proposed a system of spheres within spheres. The Earth was set like a prize at the center, nestled among the orbs for the Sun and Moon, followed by each planet and, finally, a turning shell of stars.

This “perfect” system, however, required constant fixes to make it match observed celestial events. Changes were sometimes made to the size of the spheres, sometimes to the ascending order of the planets, also by attaching smaller spheres to bigger ones. As explained by science historian Timothy Ferris, Aristotle’s model had 55 such nesting globes with literally nothing existing outside of them.

The problem was that, while beautiful to contemplate, the system had a lot of “wobble” to it.

Around 150 CE, the Greek/Egyptian astronomer, Claudius Ptolemy, combined both long-standing observations of the stars (using nearly 800 years of data collected by the Babylonians) with rigorous Arabic mathematics to recalibrate Aristotle’s spheres, adding greater motion, and repositioning center points. Presented in a text, Ptolemy’s system better predicted the observed motions of planets and stars. And where it came up short, he was not above fudging his data.

Ptolemy’s math squeezed and pulled Aristotle’s model just enough to make it work (most of the time) without destroying it completely. The Ptolemaic system lasted for 1,500 years, but nagging problems remained. Though Ptolemy recognized that the Earth was a small point in a vast cosmos, he kept the outer layer of stars, which, at the distance he estimated, needed to spin at the equivalent of 10 million mph above the stationary Earth. If the scrim of stars were any further away, the velocity needed to maintain its nightly progress above Earth approached the impossible.

Ptolemy’s system became the basis for the new Christian Church’s understanding of the universe’s order. But there were other theories. As early as the third century BCE, a Greek astronomer, Aristarchus of Samos, had proposed a Sun-centered planetary order, adding that the Sun was much larger than Earth and that stars were in fact very distant suns. Though Aristarchus’s text outlining his design was lost, it was commented on by Archimedes, whose work survived, and repeated in 10th century texts by Islamic scholars. 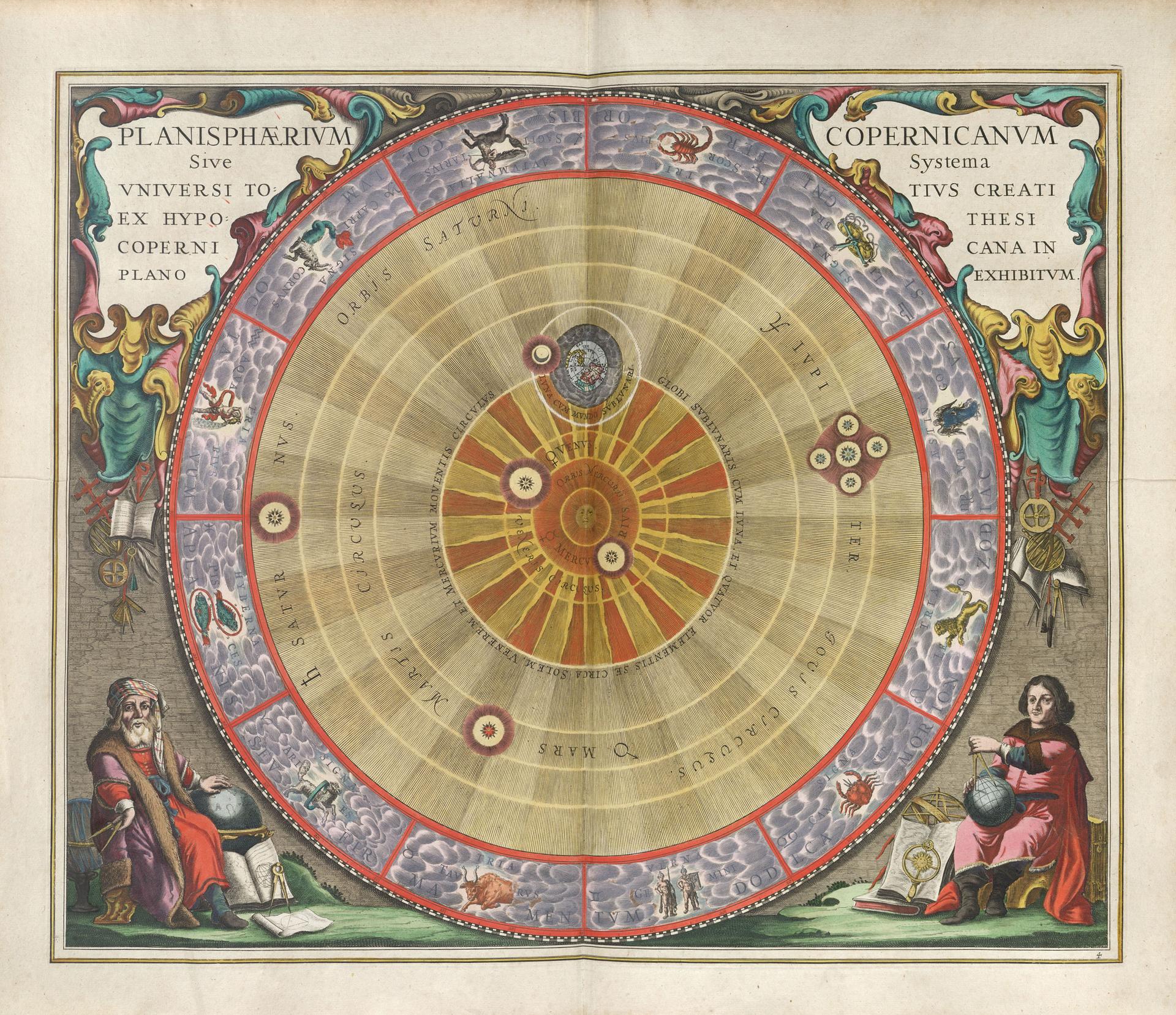 Aristarchus’s ideas eventually came to the attention of the Polish astronomer/mathematician Nicolaus Copernicus, who, after decades of research, published calculations in 1543 proposing that the Earth and planets revolved around the sun. He died shortly thereafter, having delayed publication until his final illness to avoid a charge of heresy.

The Copernican system did away with the need for nested spheres. It made clear that the retrograde motion of the planets is an optical illusion created when the Earth’s quicker orbit first syncs with and then passes Mars, Jupiter, and Saturn, and when Venus and Mercury, in their faster and tighter orbits, do the same in relation to Earth. It also showed why Mercury and Venus never appear very far from the Sun, as our vantage point takes in the full extent of their journeys around the solar center.

For decades, the Copernican and Ptolemaic systems, like political parties, had their own believers. There was something reassuring, finite, to the Aristotelian order. Copernicus, with his strange system and irrefutable equations, proposed the size of the universe was indefinite, perhaps infinite – a very unsettling idea.

The 16th century Danish astronomer Tycho Brahe began in Ptolemy’s camp before recognizing the Copernican logic. He tried splitting the difference by proposing that, though the planets certainly orbited the Sun, the Sun revolved around the Earth. As persuasive as the Copernican system was, it also had problems. It still maintained that planets orbit in perfect circles. They don’t. But, 170 years after Copernicus died, it took a German math teacher, and part-time astrologer, Johannes Kepler, to figure that out.

At the dawn of the 17th century, new inventions and discoveries were transforming the world. Trans-oceanic navigation had pretty well established the size of the globe as something far larger than estimated. This reckoning finally put the vault of stars far beyond Ptolemy’s limit.

Clearer communication by way of the printing press, and coordinated record-keeping from observatories across Europe revealed grander mysteries. Comets, for example, were considered atmospheric phenomena until the triangulated observation of a big one in 1577 showed it traveled far in space. Even more challenging to the old order were two supernovas, one in 1572 and another in 1604. The sight of huge stars appearing and vanishing in the course of weeks finally disposed of any notion of a perfect and eternal night sky. A contemporary print of the great comet of 1577. (Image Credit: wikicommons)

Kepler: A Genius at the Prague Observatory

It was in this era of better data and extraordinary observations that Kepler at last presented a working model of the Solar System that conformed with all assembled facts.

A mathematical genius living hand-to-mouth, Kepler was invited by Brahe to his Prague observatory to work with its exhaustive record of the orbit of Mars. Brahe died suddenly in 1601, and Kepler succeeded him as chief astronomer to the Holy Roman Emperor. He went on to use the Mars data to formulate his three laws of planetary motion: 1) that a planet’s orbit is an ellipse, with the Sun at one focal point; 2) that a planet speeds up as it approaches its nearest pass to the Sun, and slows as it moves away; and 3) that the orbits of all planets, no matter how far in space, share the same ratio of time to distance.

In 1610, Kepler wrote his colleague Galileo asking if he could get one of the fine new telescopes the Italian astronomer was making in Pisa. Jealous of his rival, Galileo said no.

Published in 1619, Kepler’s laws at last clarified fundamental principles of planetary motion. “I contemplate its beauty with incredible and ravishing delight,” he wrote of his third law. The calculations behind the third law were the basis of Isaac Newton’s equation for his law of universal gravitation, presented in 1686.

Prepare Now to Meet the Universe

With Newton, we have reached the gate that opens onto our modern era, one of ever-accelerating data collection and analysis. Newton’s physics prevailed for more than 200 years, a stable model for our earthly lives, before Swiss patent clerk Albert Einstein proposed in 1905 that neither gravity nor time are universally constant.

In Einstein’s wake, our expanded observations of the universe have created the model of an unimaginably immense cosmos bound together by masses of invisible particles so heavy as to bend light and collapse time. Its beauty, though infinitely more abstract than the planetary laws contemplated by Kepler, is no less ravishing and incredible to contemplate.

Have you met Jim al-Khalili? (You’re about to.) He is a UK-based theoretical physicist and also a talented interpreter of technical science for people like us – sort of a…

Libraries have been around for more than 2000 years. And so has the problem of organizing and searching written knowledge. While Google’s search is impressive, it owes much to the…