Like a story out of Jane Austen, follow the ardent affair of one of the greatest military leaders in history, the woman he loved, and the daughter they sired.

The name Admiral Horatio Nelson is among the most recognized in British history. In fact, a 2002 BBC poll of U.K. residents ranked Nelson number nine on a list of the 100 greatest Britons (ahead of Oliver Cromwell and right behind John Lennon). You might even be familiar with his famous 1805 message to his fleet: “England expects every man will do his duty.” However, what you might not know is that he was also involved in a scandalous romance that at once riveted the attention of the British public and provided a modicum of normalcy in his illustrious life.

Emma Lady Hamilton was born Amy Lyon in 1765, in Cheshire, England. Her father, a blacksmith, passed away when she was very young, probably around age two. Because her mother had to make her own way in the world, Emma grew up without either birth parent in her life. She was reared by her grandmother, Sarah, in Wales until roughly the age of 12.

It was not unusual at the time for children her age to have to earn their keep. Emma began her working life first as a maid and governess, but she wanted more. Being an unmarried girl from the “wrong side of the tracks” wasn’t exactly a foundation for success in 18th-century England. Emma used her charm and good looks to make up for her lack of polish and social status. By combining her sharp intelligence with her drive, she succeeded to a degree no one would have predicted.

Emma On Her Own

But her eventual success was built on a foundation of eyebrow-raising behavior as a young woman. For example, Emma worked a stint in a place called the Temple of Health in the Pall Mall section of London. Owned by a quack doctor, James Graham, this enterprise featured something called the Celestial Bed, believed to function as a “marital aid” for couples who found it difficult to conceive. Bawdy decor and louche personnel were used to put couples in the mood – along with an electrical shock. (The bed was said to have reliably stimulated its users, one way or another.) Emma’s role was as a sort of living set of instructions, offering a hands-on demonstration of the erotic arts. Although the Temple managed to stay in business for only about a year, there Emma discovered a taste for the good life.

Emma in her youth, as painted by George Romney. (Source: Public domain, via Wikimedia Commons)

Only around 20 years old, Emma became essentially a cross between a modern-day “good-time-girl” and a professional “escort” who shocked and scandalized her way around the U.K. She had affairs with the great and the good of the land, eventually ending up with Sir William Hamilton, the British envoy to the Kingdom of Naples and a connoisseur of art.

Emma was introduced to the celebrated 18th-century artist George Romney, who became infatuated with her and made her his muse. Assuming different personae, she sat for well over 150 of Romney’s paintings.

Sir William proposed to Emma. As a woman of some experience, she knew how the world worked and recognized the arrangement for what it was – an opportunity to become a woman of status (and a chance to distance herself further from her rather scandalous past). 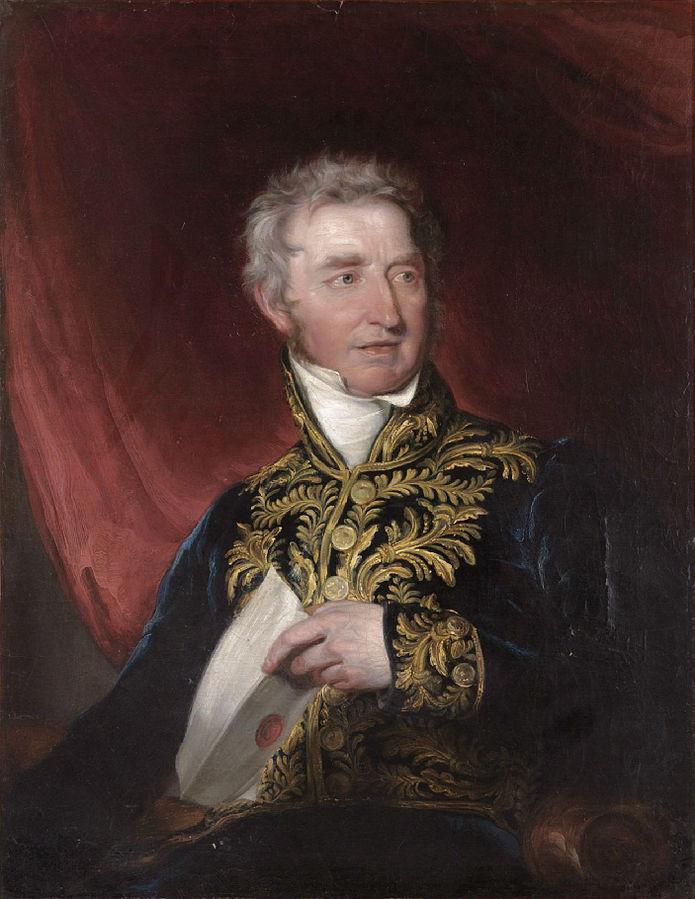 The two wed, and, after a while, she even grew sincerely fond of Sir William, describing him in her diary and letters as her best friend and darling husband.

Emma, now Lady Hamilton, and Lord Nelson met in 1793 when the Nelson’s ships called at Naples, but the sensational love affair that was to become one of the defining chapters of both their lives wouldn’t commence until some years later.

In that same year, Britain joined in the French Revolutionary Wars, and Nelson assumed command of a ship of the line, the Agamemnon. During this time, he served in the Mediterranean, where he assisted in the capture of Corsica but also suffered several major injuries, including losing the sight in his right eye during the Battle of Calvi, and later losing his right arm at the Battle of Santa Cruz de Tenerife.

During the First Battle of Copenhagen in 1801, Nelson put a spyglass to his bad eye and claimed he couldn’t see his commanding officer’s order to withdraw. His subsequent victory resulted in his promotion to vice-admiral.

In 1798, France’s Napoleon Bonaparte was on his great expedition in Egypt, while Admiral Nelson was in command of the Royal Navy’s Mediterranean Squadron, chasing Napoleon’s ships around the region. In order to defeat the French forces, Nelson needed supplies and logistical support. He went to Naples, which was one of England’s allies in the Mediterranean, to seek Sir William’s aid. Nelson, who had yet to achieve legendary status, was initially rebuffed by Hamilton due to a disagreement about how best to proceed.

For more on Horatio Nelson and other legendary commanders, check out the MagellanTV series The Great Commanders.

Emma to the Rescue

However, it was apparent to Emma that Nelson needed help, and she engineered the assistance he sought via her relationship with the Queen of Naples. With food, water, gunpowder, and all the supplies he required, Nelson was able to sail off to his victory over Napoleon at the Battle of the Nile – thanks, in large measure, to the help of Lady Hamilton. Following this victorious campaign, Nelson returned to Naples, and the hospitality of the Hamiltons, to recover from a head wound he had received during the  recent campaign.

While Nelson stayed in Naples, Emma nursed him back to health. Perhaps inevitably, over the course of his recuperative leave they fell in love. According to one of Nelson’s chief aides, Thomas Hardy, and other contemporary accounts, the relationship between Nelson and Emma was a genuine love match. But, of course, there was the complication that, at the time, both lovers were married.

It seems that Admiral Nelson and Lady Hamilton filled a need in each other’s lives. She mothered him, provided unconditional love, and gave him a sense of familial belonging he had not known since the death of his natural mother. At the same time, Nelson became something of a father figure to Emma, providing security and protection she had never truly felt throughout her own life, even with Sir William. Eventually, she became fully devoted to Nelson.

How Do You Solve A Problem Like Lord Nelson?

Celebrity, it seems, was a two-edged sword even in the 19th century. For all the accolades Nelson earned, he and Emma were the targets of unkind gossip. But that didn’t stop their affair. When Napoleon invaded Italy, Nelson evacuated the Hamiltons and the Neapolitan royal family. He was recalled to London, but he would not go without Emma.

The admiralty was furious at the scandal that his affair was creating. They even considered stripping him of the honors and awards conferred on him for his victories. But the Navy had forgotten about something: the British public. The common people were thrilled by Nelson’s heroics, his victories, and the example of courage he represented. No one seemed to mind his dalliances.

Eventually, Nelson and his wife Frances separated, though he still took responsibility for her living expenses. Emma and Sir William remained married, but for the most part lived separately. Over time, Nelson and Emma began to live together, at least as much as they could. Emma became pregnant and gave birth to a daughter named Horatia, after her father. 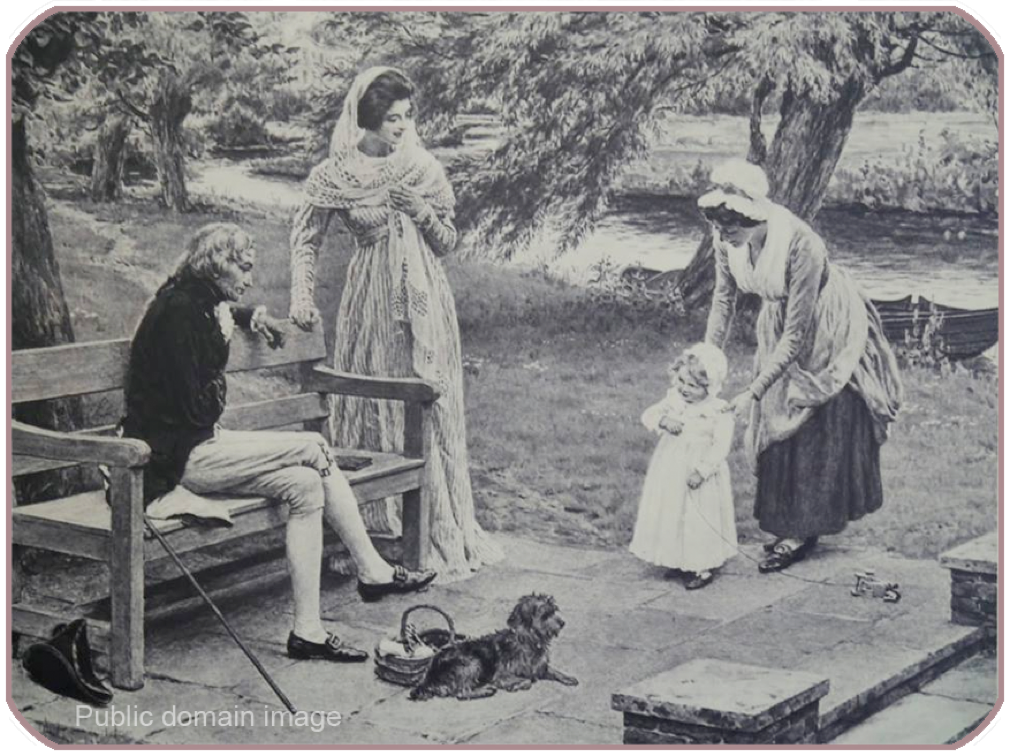 At first, Emma gave the child up for adoption, but she and Nelson managed to create a fiction that they were Horatia’s godparents. To deflect any taint of scandal from the innocent child, they spun a story that Horatia’s parents had been killed in the evacuation of Naples and they were now dutifully attempting to raise her. Nelson bought a home to call their own, Merton Place. Emma and Nelson continued this somewhat awkward, even if romantic, arrangement for several years.

Their life together, though scandalous in the eyes of some, was actually rather domestic and happy. For both Nelson and Emma, it was probably the most conventional relationship either had experienced. Living together as a family, they carried on as best as society would allow.

Meanwhile, Napoleon and his forces were building for a rematch.

Napoleon vs. Nelson, Yet Again

In 1803, Nelson assumed command of the Royal Navy’s forces in the Mediterranean. For his part, Napoleon was working on an audacious plan to send a grand army of some 350,000 troops to invade England. But the French needed to control the English Channel in order to make the plan work.

To stop Napoleon, Nelson spent 18 months playing a very dangerous high seas version of tag with the French fleet, before finally settling in to confront the combined naval forces of France and Spain at the Battle of Trafalgar off the southwest coast of the Iberian Peninsula. 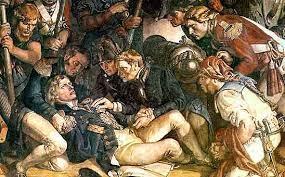 The Death of Nelson, detail from a mural by Daniel Maclise, Westminster Palace, 1860s

Nelson was at the height of his popularity, idolized by those under his command. They would have done anything he asked, no matter how perilous. While on the deck of his flagship, HMS Victory, he was struck by a musket ball from a French sharpshooter. He was taken below and, according to the ship’s surgeon, kept repeating, “Thank God I have done my duty,” until he could no longer speak and died.

A Nation Honors a Hero (Almost)

The entire British nation was in mourning for Nelson. His state funeral was the stuff of legend. In death, he was transfigured into a status that no other British military hero had achieved. His beloved country did everything imaginable to honor him – except the one specific thing he most desired. 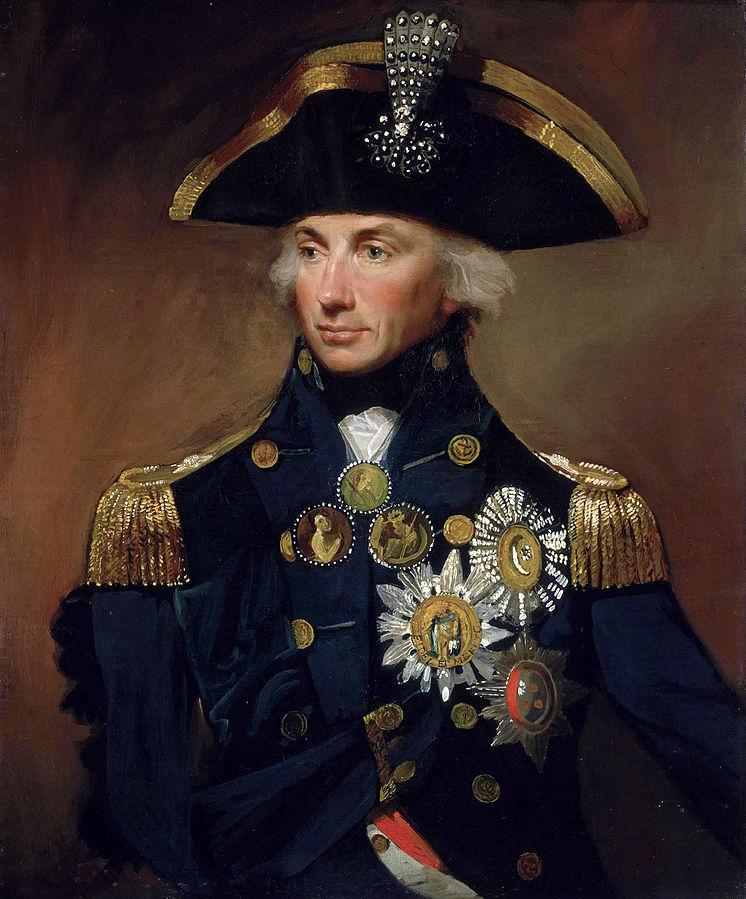 Admiral Lord Nelson had wanted his “wife” Emma and his daughter Horatia to be acknowledged and accorded all relevant status. His request went unanswered. Horatia was never recognized as his legitimate daughter. As for Emma, despite receiving funds from her marriage to Sir William, as well as the deed to Merton Place and 500 pounds a year from Nelson’s will, she ended up in debtor’s prison in Calais, France. Emma’s life without Nelson was out of control. By some accounts she developed an addiction to both alcohol and opium. She died alone in 1815.

Shawn Eisner is a Southern California native with a love of history, the arts, the natural world, philosophy, education, and volunteerism. A graduate of Pepperdine University, he has worked with and managed a variety of businesses and charitable groups.

Title Image:  Admiral Nelson and Lady Hamilton on board his ship HMS Vanguard in Naples Bay.

Mary Queen of Scots served as queen of multiple kingdoms before she was dethroned for her faith and the controversies that followed her in life. She was Catholic in the face of…