While some anti-storm measures already exist, the need for novel solutions on larger scales is increasing. Will these ambitious plans stop future storms?

Before you see the darkening skies, you hear reports on the news: It’s going to be a Category 5 storm. That means wind speeds over 157mph, strong enough to strip the bark off of trees and level whole blocks of houses. The volume of water that will blow in from the sea and pour from the clouds means waterways overflowing into the streets, people trapped on rooftops, daring emergency rescues.

Of course, the majority of people are making plans to evacuate beforehand – emptying supermarket shelves and prioritizing belongings, wondering if they’ll have anything to come back to. The levees have been built, homes raised on stilts, and windows boarded up, but still, there is an unmistakably helpless feeling that lingers, with entire communities at the mercy of wind and water. What if we could do more?

Learning from History Won’t Be Enough

Throughout most of history, technology to protect against the ravages of major storms has been largely primitive by today’s standards. Often the only structures that survived such events were built low and wide, out of heavy stones, much like the military forts weathering storms in the Caribbean and southern Florida. One such fortress, Fort Saint-Louis in Martinique, was among the few buildings to survive the Great Hurricane of 1780 – a storm that killed at least 22,000 people.

The levees of low-lying flood-prone cities like New Orleans are a newer take on old building tactics, first appearing 3,000 years ago in Egypt along the banks of the Nile. Historians believe these Egyptian levees stretched more than 600 miles, serving as a precursor for levees that would later be built on the banks of the Mississippi River from the early 1700s to the 1980s to prevent flooding in the surrounding areas.

Another common tactic is raising homes on stilts, especially in typhoon-stricken areas like Southeast Asia. For some people in Polynesia and the Pacific Islands, these raised structures not only provide some protection from rising water levels, but are also a means to differentiate buildings. But while stilts protect homes from high water levels, they do little to prevent damage from wind. 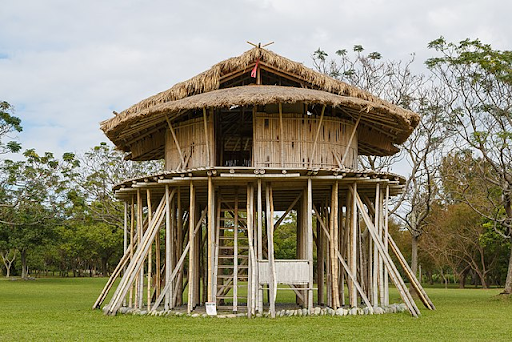 A traditional raised home from an aboriginal tribe in what is now Taiwan.

Warming oceans, and the resulting increase in storm frequency and intensity, are major drivers of the need for new anti-storm tactics. One imaginative idea is to construct a series of underwater pipes that will force pressurized air into the ocean depths, creating bubbles that would in turn force frigid water up to the surface. This process would theoretically lower the temperature of the surface water from around 87 to 80 degrees Fahrenheit, eliminating the warm surface water needed for storms to develop and grow.

A company named OceanTherm reports it has conducted a successful test of the idea (nicknamed the Bubble Curtain) after building down 164 feet. They cite similar technology that has been used to keep fjords from freezing over in Nordic countries, using the inverse effect of piping warm water to the surface. The company says the goal is not so much to stop storms in their tracks, but to eliminate them as they begin to form.

Some scientists think the plan is too ambitious, with the heat from the Sun being too much to counteract. OceanTherm acknowledges its system wouldn’t be able to stop or prevent larger category storms, even with the company’s proposed system of permanent and mobile piping. So, while there is some potential for application, it is far from a widely applicable solution.

Prior to the Bubble Curtain’s conception, there was a similar system being considered by investors in 2009. The design, proposed by engineering professor Stephen Salter, is centered around cost-effectiveness, using a ring of used tires for buoyancy to support a single thin plastic tube with a diameter of around 100 meters. The pumping action is powered by the motion of the waves, with a series of valves catching warm water to raise the level within the tube by mere inches. This difference creates the unequal pressure needed to cycle the warm water down and cold water up. However, as with the Bubble Curtain, this solution has been met with challenges. The number of pipes needed could reach into the thousands – and the effects on local sea life could be negative – even if these “Salter Sinks” were only deployed during hurricane season.

Could Wind Farms Rob Storms of their Energy?

To counter a new generation of massive storms intensified by climate change, Professor Mark Jacobson has proposed a solution using wind turbines, a key tool in generating renewable energy. As with current ocean-based wind farms, the turbines in Jacobson’s scheme would be situated offshore, but they would number in the tens of thousands. As a storm’s outer edge moved into the turbines, its wind speed would be lowered, preventing more water and waves from fueling the destruction.

In one of Jacobson’s simulations, he calculates that 79,000 turbines in an area of 35,000 square kilometers of the Gulf of Mexico would have reduced Hurricane Katrina’s winds by 80-100 mph and dropped the water volume by 79 percent. 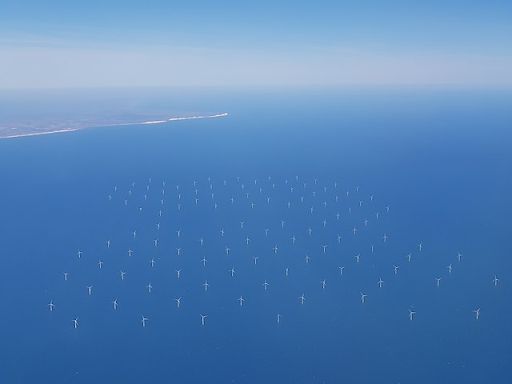 The Rampion offshore wind farm, off the coast of Sussex, England.

Those numbers are encouraging, but any plan has its uncertainties. However, when challenged with concerns about the cost, Jacobson cites New York State’s considered plan to spend $20 billion on seawall construction. He also says that, unlike seawalls and levees, the cost would be offset by energy generation, not to mention the environmental benefits gained from switching to renewable energy. And when met with the opposition from groups concerned about the effects on birds (from flying into the blades, for example), Jacobson points out calculations showing fossil fuels kill “10 times as many birds per kilowatt-hour than wind does.”

Jacobson has a counter to almost every argument when it comes to cost and scale, but he does acknowledge that the turbines could be damaged by a particularly harsh storm with winds exceeding around 120 mph. Even then, though, he says the turbines will have done their job by making sure the wind doesn’t reach that point, keeping the defensive barrier intact. Whether his plan would work in practice or be subject to the “law of unintended consequences” is, of course, unknown, but Jacobson’s ideas are surely worth considering.

Other scientists have proposed a scheme that dwarfs even underwater pipes and wind farms: cooling the planet through chemical means. The Earth’s upper atmosphere would be pumped full of sulfate gases, which are dense enough to absorb some wavelengths of light. This would reduce the energy reaching the oceans, causing a “sunglasses effect” that would lead to global cooling.

The theory has already been demonstrated in practice by looking at massive volcanic eruptions (such as Mt. Tambora in Indonesia) and then measuring the reduced strength of storms the following season. A team of scientists from around the world presented research in 2015 to global leaders, citing models that showed the potential to limit massive “Katrina-level hurricanes” to half the number in coming years. While pumping sulfates into the atmosphere was significantly cheaper than many other solutions (only around $10 billion), there were plenty of hangups.

For example, meteorologists say you would need consistent coverage, as a cooler Atlantic makes storms worse in the Pacific, and vice versa. Most worrying is the negative effect the gasses would have on the ozone layer, threatening to punch small holes all over the globe similar to the infamous hole over the South Pole. However, the plan has some potential if different gasses are used, and scientists continue to experiment with designing new sulfate particles that can reflect light without the harmful chemical effects.

The chemical geoengineering solutions aren’t just recent proposals, and government interest isn’t anything new. The United States’ Project Cirrus in 1947 was an early attempt at a technique known as cloud seeding, which involves flying a plane into a developing storm and releasing chemicals into the air at certain specific points. In the case of Project Cirrus, the planes released dry ice – and soon after, the storm reversed direction, unfortunately sending it to make landfall in Savannah, Georgia.

The results of this one-off experiment were both disastrous and successful. And, after a particularly calamitous hurricane season in the 1950s, Congress approved the founding of the National Hurricane Research Project (NHRP). It would be the NHRP that ran a program from 1962 to 1983 called Project Stormfury. The program sought to build on Cirrus’s work, disrupting storms while they developed, this time by dispersing silver iodide instead of dry ice and doing it more directly into the storm walls. The idea was that the released iodide would freeze supercooled water contained in the walls. To work, the planes would have to get as close to the inner walls as possible while the storms developed. 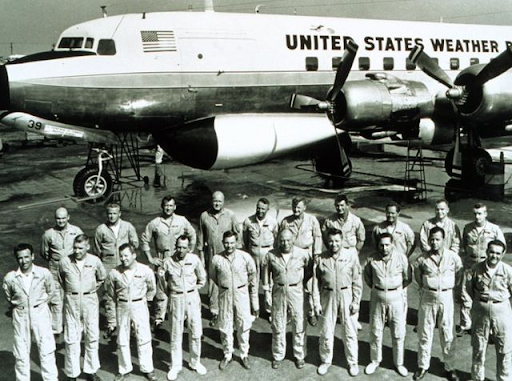 Project Stormfury personnel in front of a Douglas DC-6 plane, 1966.

Naturally, the specific requirements of the experiments, as well as pilot safety, were of great concern. Therefore, the number of storms that were actually seeded was low, considering the program ran for 21 years. Early test data was promising. In 1963, Hurricane Beulah experienced almost a 20 percent decrease in wind speed after being seeded, but the results were deemed inconclusive. The team had to wait six years to conduct the next test, spending the downtime preparing and improving their equipment. The results of the following tests were mostly ambiguous, with researchers unable to tell if the changes in storms came naturally, or from the released iodide.

In the ’70s the program shifted its focus toward detecting and analyzing storms as opposed to flying missions. As a result of the extended timeline needed to conduct proper research, the program was cancelled in 1983 – proof of how difficult it is to stop such monstrous storms, even with time, money, and careful planning.

Difficulties may abound in preventing these massive storms, but that doesn’t mean people will stop trying any time soon, as the threat is only growing. Perhaps within the next 20 years we will see a solution that removes the uncertainty, the dread, of wondering what destruction will be wrought in the storm’s path. Just as ancient cultures used their tools of digging and construction to help communities, modern humanity can apply its knowledge to change lives for the better on a global scale.

Wallace Burgess is a Contributing Writer for MagellanTV. He is a recent graduate of Syracuse University (go Orange!) where he earned Bachelor of Arts degrees in both Writing and Rhetoric, and Sociology. He lives in New York City and enjoys playing poker and video games.

The green cities movement can benefit cities’ economies, citizens’ health, and the world’s climate. Here’s an overview of the movement – its benefits, its complexities, the most…