Modern archeological technology has revealed that the Viking’s terrifying raids were just the leading edge of a complex culture and a broad system of trade that stretched as far as China.

Feared for two centuries in the early Middle Ages, the Vikings have been misunderstood ever since. It is easy to see why. During the decades that those pagan Norse raiders swept out of their cold fjord encampments to terrorize most of coastal Europe, there was little that their Christian victims wanted to understand outside of how to stop them.

Prejudice, hearsay, and some spine-tingling exaggeration enliven the earliest coverage of Viking depredations. The accounts of these looting attacks on towns and monasteries were mainly compiled by chroniclers a century afterwards, and were accepted as history by scholars mainly because the Vikings themselves didn’t write much of anything down.

For them, history was told in epic poems – the sagas – recited by bards in the pay of important chieftains. What little writing they did, in cryptic forms called runes, was mainly in service of memorial markers valorizing dead warriors, with little other information besides names and places.

Beginning in the late 19th century, astounding archeological discoveries appeared, starting with an elaborate ship burial mound uncovered in Osberg, Norway, in 1880. Hundreds more, large and small, have been found since. A whole world is interred when an important person (and Vikings honored great women as well as men after death) is laid to rest with the trappings of their earthly power.

Further excavations of former settlements gave a clearer, though still incomplete, picture of Viking life. Now, with the advent of stable isotope technology, archaeologists can trace the movements of goods and people across the medieval world. It has revealed astonishingly complex and extensive trade and migration patterns that put the frightening Viking raids in a broader perspective.

So, armed with the latest studies of the archaeological record, let’s have a look at the Vikings – where they came from, what they did, and where they finally went.

To learn more about the Vikings, check out the MagellanTV documentary Warrior’s Way: The Original Superheroes

The old Norse word Vik, meaning a bay on the sea, is generally considered the root of the name, that is, a person of the bay. As archaeologist Neil Price recounts in his authoritative Viking history, Children of Ash and Elm, there was an extensive network of seagoing Scandinavian cadres from many small “kingdoms” of farmers and fishermen that dotted the coasts of present-day Norway, Sweden, and Denmark in the 6th century CE.

These small settlements (Vikings did not have what we would recognize as towns until much later) traded and competed with each other without much troubling their Goth neighbors to the south. The Saxons and Franks were busy filling the power vacuum left by the final collapse of the Western Roman Empire in 476.

However, an environmental calamity would change that relatively stable social order.

Climate scientists now agree that two, possibly three, titanic volcanic eruptions took place in the Southern Hemisphere between 536 and 547. These cataclysmic events launched more than an estimated 100 km³ of ash and sulfur into the Earth’s atmosphere, creating a veil of fine debris that drastically obscured the Sun’s rays for years. The resulting devastation to agriculture in temperate zones was bad enough, but in northern latitudes it was a catastrophe on par with the Black Death.

The archaeological record of the following decades shows a loss of half of Scandinavian farmland, with an estimated equal decline in population as thousands starved. Norse communities were now concentrated around the shore, where fish remained a stable source of protein. Their seagoing trade and battle expeditions became more desperate and fatalistic, and were eventually directed outward. A fierce competition for resources – of goods and manpower – arose. Recognizable Viking raids on defenseless coastal communities across northern Europe and the British Isles started around 793.

A Viking attack was utterly terrifying. Killing, looting, rape, and the enslavement of survivors characterized these attacks for over a century. Such mayhem, however, was typical of armed clashes between rival groups in an era of warlord-directed violence across Europe.

The Vikings stood out for being fierce pagans, the last non-Christian people in Europe; for the suddenness of their sea raids (at least land armies gave some advance warning they were coming); for their frightening funeral customs that included animal and, in some cases, human sacrifices; and for their extreme, to say the least, personal style. 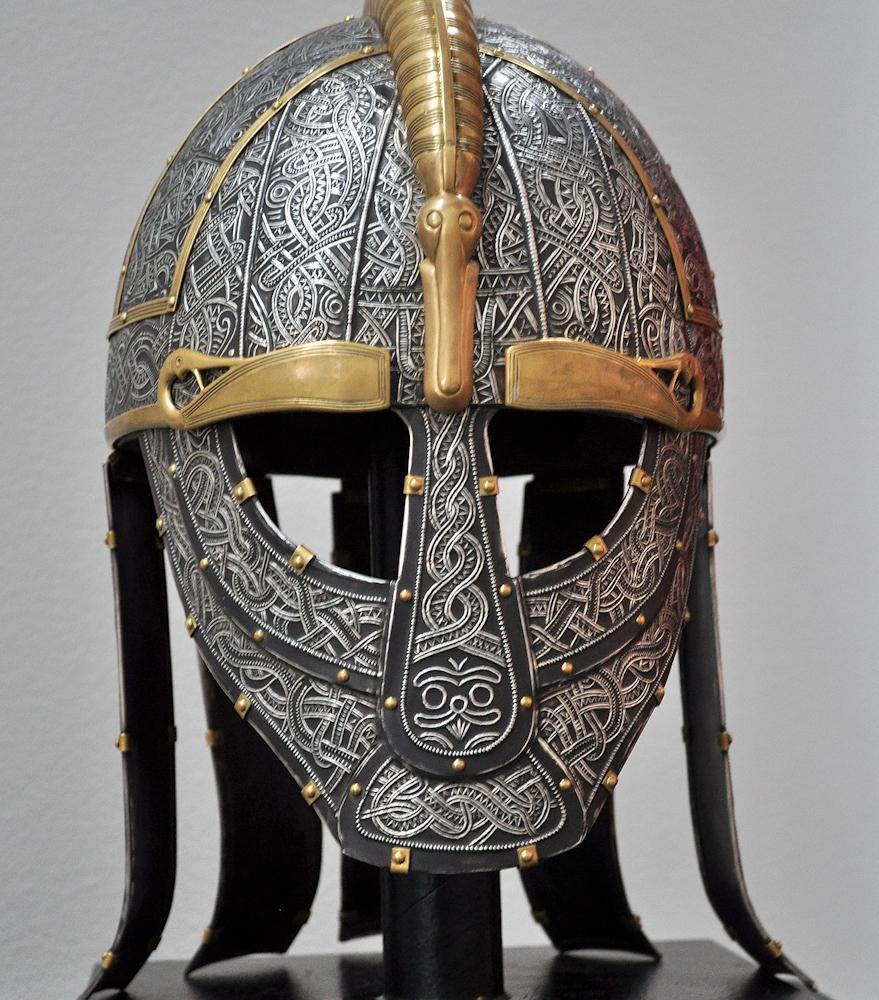 A modern replica of a Viking helmet found in the tomb of a high-status warrior or chieftain. (Source: Wikicommons)

Warriors were heavily tattooed in the linked geometric patterns that also decorated their ships. The basic garment for men and women was a long woolen shift, open in front, covering layers of long shirts and leggings held in place by buckles, bands, and pins made of silver and gold. Fighters could be clad in leather or chain mail or, far more upsetting, appear for battle howling naked except for the axes or long swords in their hands.

We have early productions of Richard Wagner’s Ring cycle operas to thank for the silly horned helmets that popular Viking images have depicted ever since. In fact, Vikings did not wear horned helmets, instead favoring thick leather or close-fitting iron protection for head and face.

In another departure from the modern stereotype, Vikings highly valued personal grooming. Men were observed to comb their long hair daily, and Viking traders, whose business empire stretched from what's now Iceland to Constantinople (modern Istanbul), were said to be far more appealing to foreign women than local husbands or boyfriends.

Spectral isotope scans of organic specimens, such as teeth, bones, and clothing, have revealed the staggering extent of Viking trade routes. Silk in lady’s caps found in English burial sites has been conclusively found to have come from China, just as gold ornaments from the Middle East and India have turned up in Scandinavian tombs.

Viking raids are now seen to have been the leading edge of a sophisticated economic system that supplied raw materials like tar (a key building component), fashion accessories and ornaments made from melted gold and silver loot, and – an enormous part of the Viking economy – slaves.

From Traders to Raiders

Viking raids occurred in three broad historical phases. The first attacks, directed at mostly undefended Christian settlements, were primarily looting expeditions to places already familiar to Norse traders. These raiders knew exactly where they were going and what they’d find once they got there. 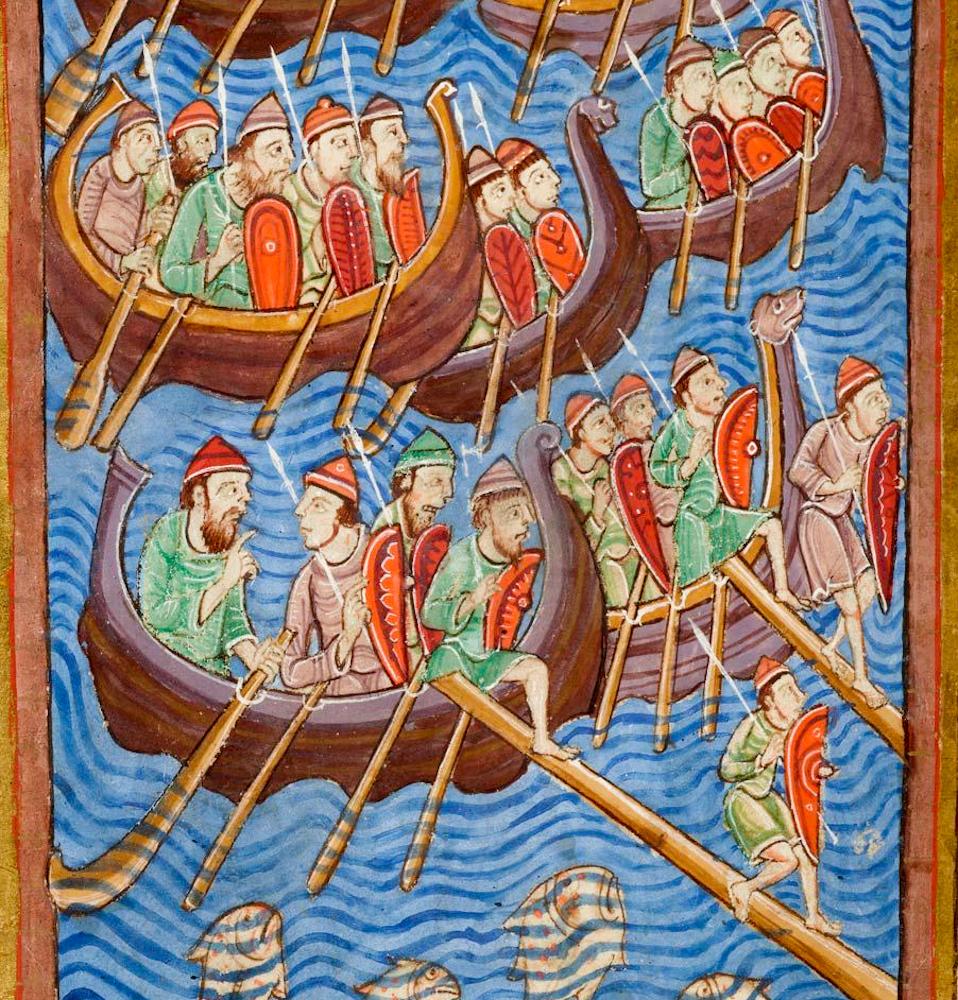 Detail from an 11th century illuminated manuscript depicting the Viking invasion of England in 886.

This first wave greatly enriched the successful teams of looters and their chieftains. With increased status and wealth, these men were able to take more than one wife along with an assortment of concubines. This toxic patriarchal system had the direct consequence of forming a legion of young males for whom female attachments were practically unavailable.

Some historians believe this social imbalance led to a second, broader wave of Viking expeditions, now with the aim of abducting women as possible partners, while also enslaving men and children.

Viking slavery had two main commercial ends. The first was for domestic labor. Farms had gradually grown back from the 6th century collapse. Sheep herding had become a major industry, and the carding and weaving of wool was an enormous domestic market. The second use for slaves was in trade with the Byzantine Empire conducted by the bands of Eastern Vikings known as the Rus'.

A lot of what we know about Viking customs comes from the written report of a trade representative sent by the Caliph of Baghdad to the Rus’ Vikings near the Black Sea in 922.

Giving their name to Russia, the Rus’ Vikings sailed down the Volkov and Dnieper River systems, hauling their flat-bottomed ships over land when necessary to reach the Black Sea and the vast mercantile opportunities at Constantinople. There, Viking traders had access to luxury goods carried along the Silk Road that then found their way to high-status households across the Viking world.

This world was starting to consolidate in the 10th century into a few larger kingdoms across Scandinavia that would soon form nation states. Population growth encouraged the third and last wave of Viking expeditions, one now involving hundreds of ships that carried whole families along with the raiding parties.

The Vikings Settle Down

Less a unified army than combined companies of martial homesteaders, these groups swept across northern France, whose King Rollo deeded them the coastal province now called Normandy (that is, Northmen’s Duchy) in 918 for a promise not to raid Paris anymore. In England, the Vikings came to stay in York (Norse name Jorvik) in the north, and the eastern central shires known ever since as the Danelaw. Smaller groups populated Iceland and Greenland, even setting up frontier encampments, probably for the lumber trade, on the coast of Newfoundland.

These New World Vikings soon ran afoul of Indigenous Americans, whom the Norse called Skraelings, and eventually departed, leaving little trace of their time there other than an archeological site in Newfoundland and mention in a couple Icelandic sagas.

By 1000, broad success had transformed Viking society, which began as an extensive network of culturally coherent, albeit diverse, people and customs, into something resembling that of their European neighbors. The Norse ruling classes had gradually accepted Christianity as a means of smoothing foreign business trade and, as churches kept good records, codifying laws and taxing their subjects. 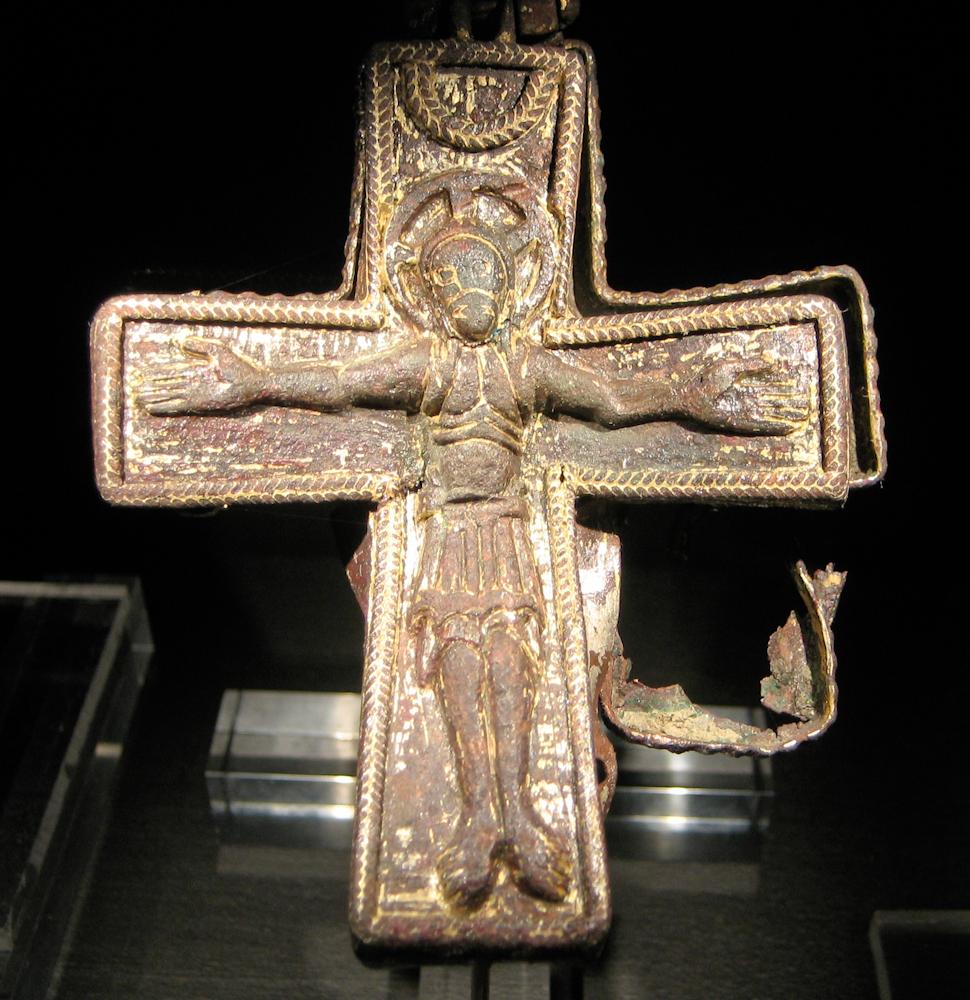 Those subjects in turn settled down. In the space of a few generations, the overseas Vikings mainly became English and French tradesmen and farmers. Outside of some social customs preserved in far-off Iceland, the Viking phenomenon had ended.

Well, mostly anyway. By the mid-11th century, now speaking French and called The Normans, some Viking great-grandchildren succeeded in conquering southern Italy, which they then ruled for 200 years. Oh, and in 1066 those Normans sent an army to Dover, soon defeating the resident Saxons, along with their cousins in the Danelaw and York, thereby creating England.

This is not at all surprising. If there is one stereotype that modern archaeology has confirmed it is that the Vikings were very, very good at whatever they set out to do.

Title Image: Norwegian students at the oars in 2019 on a replica of a 830 CE Viking ship discovered in a burial mound.

Trading Longboats for Horses: The Italian Days of the Norman Knights

Before William, Duke of Normandy conquered England and became its king, cadres of Norman mercenaries headed from their homeland in northern France to the very rich and ruthless…

An almost forgotten medieval uprising of serfs has directly improved our lives today. In the late 14th century, Wat Tyler led the English peasantry in a revolt against the harsh…

The Cathars were anti-materialistic Christians in 12th-century southern France. In the eyes of the medieval Roman Catholic Church, they had to be eliminated by any means…

The Shroud of Turin was thought to be Jesus’s burial cloth. Scientists called it a hoax – until their studies were critiqued. Now, the Shroud remains an enduring mystery that…