Why Did Ancient Egyptians Worship Cats?

Cats in ancient Egypt were seen as vessels of the gods and were important symbols in Egyptian culture and history. But why?

Thousands of years after the age of the pharaohs, the marvels of ancient Egypt continue to fascinate us. For some, it’s the inscrutable Sphinx and the majesty of the Great Pyramids of Giza that capture the imagination. For the more esoterically inclined, perhaps it’s the mysterious Egyptian Book of the Dead. And for others, well, it’s the cats.

Many animals were beloved in ancient Egyptian culture, but no creature was as revered as the cat. Yes, your loving, snarky, and furry friends were once thought to be god-like, and they represented many important characteristics and sacred values that the Ancient Egyptians held dear. They were helpful hunters and adored members of Egyptian families. Some were even adorned with the jewels and gold emblems of royalty. If you think your pampered tabby displays an attitude of superiority, just imagine how those literally idolized felines of the pharaohs must have behaved!

So, let’s delve into the eternal question: Why did ancient Egyptians worship cats?

Before cats assumed a sacred role, ancient Egyptians recognized a more practical potential for them. Early on, people noticed that feral cats preyed upon pests, such as rodents, that ruined crops that were vital to feeding the population of a mainly agrarian society. They also went after venomous snakes and scorpions that threatened humans.

Over time, cats and people interacted more regularly and their relationship became mutually beneficial. Cats were provided with food and shelter, and the two species hunted alongside each other. Like your modern companion cat, the Egyptian felines could be wild and cunning at times, and affectionate and loving at other moments.

Eventually, the cats stayed in family homes. There they produced kittens, were fed, and developed differentiated traits through breeding programs. Probably, they acquired names. They had become domesticated, but how did they become divine?

Cats Were Vessels of the Egyptian Gods

At first, cats were not worshiped as gods per se, but as vessels for them. The ancient Egyptians believed that cats were chosen to be inhabited by gods and that some of the divinities even adopted their likenesses. For example, Bastet (also called Bast) was the daughter of Ra, the sun god. As early as the Second Dynasty (2890 BCE), Bastet was worshiped as the goddess of protection and associated with the home, domesticity, women’s secrets, fertility, and childbirth. She was a key goddess in the Egyptian pantheon and was originally symbolized by a lion. Later, she was depicted as a human body with a cat’s head, and it was believed that she could turn into a cat whenever she pleased.

During times of fertility, such as harvest and childbirth, Egyptian women and men would wear amulets featuring images of Bastet in the hope of channeling some divine feminine energy. So important was Bastet that a city arose in her honor – Bubastis, also known as Per-bast, which translates to “House of Bast.” She was the subject of numerous paintings, sculptures, architectural monuments, and other displays that were created in her honor.

In the ancient Egyptian language, cats were sometimes referred to as "miu" or "miut" which means "he or she who mews.”

Modern cat lovers (such as me) may be distressed to learn that some cats were bred to be killed in ritual sacrifices and then mummified, all in sacred offerings to the gods. In the Temple of Bast in Bubastis, priests would sometimes sell mummified bodies of deceased cats to worshipers hoping to harness their divine energy, which apparently extended beyond death.

As anyone who’s spent a little quality time with a cat knows, their dual nature is among their most notable traits. They can be aggressive toward outsiders but protective and gentle toward their offspring and their human companions. The ancient Egyptians recognized their protectiveness and maternal instincts, too, and cats were commonly portrayed in art with many kittens, representing their maternal nature and the fertility of the domesticated cat.

These characteristics were also associated with Bastet, the goddess of protection, who was seen as a model for Egyptian women. Women who had healthy children and took care of their families were honored – they were seen as being free from the sins of the world.

Cats were also thought to be protectors of the underworld, as was Bastet. She was also thought to fend off contagious diseases and evil spirits, which again connects her symbolically to cats who were valued for killing rats and mice, carriers of disease and pestilence. 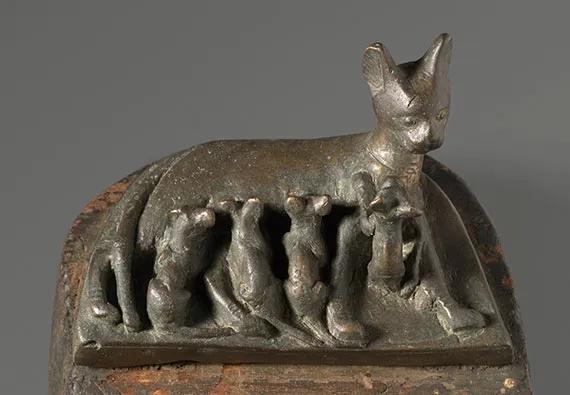 A Connection to Royals & Pharaohs

Pharaohs, royalty, and noblemen brought cats fame and recognition. These wealthy and respected individuals adopted cats and taught common Egyptians the values the felines represented. Sometimes they dressed their cats in gold and jewelry, and they even shared food with them from their own plates. The adopted cats were so important to their human families that, when the royals died, their cats were often mummified and entombed with their owners’ remains.

When a cat died on its own, its human family entered a period of mourning. Herodotus, the ancient Greek historian, and geographer wrote about a tradition that was brought from Greece to Egypt: “All the inhabitants of a  house shave their eyebrows [as a sign of deep mourning]. Cats which have died are taken to Bubastis where they are embalmed and buried in sacred receptacles.” When the humans’ eyebrows grew back, the period of mourning was deemed complete.

The first recorded cat sarcophagus belonged to the royal pet of Prince Thutmose, the eldest son of Pharaoh Amenhotep III. The cat went by the name Ta-Miu (“the female cat”), and Prince Thutmose gave her all he could, even in her afterlife. She was laid to rest along with meat and various sacrifices, much as a deceased nobleman would have. The feline’s sarcophagus was made of beautifully decorated limestone, with an inscription that reads, “I myself am placed among the imperishable ones that are in the sky / For I am Ta-Miu, the triumphant.”

And Ta-Miu was far from unique in the memorial honors bestowed upon her. Near the city of Bubastis, there are catacombs (no pun intended) where sacred cats were buried in ancient times. Modern archaeologists have excavated Bastet’s temple and discovered more than 300,000 mummified cats – and more continue to be found.

“You are the Great Cat, the avenger of the gods, and the judge of words, and the president of the sovereign chiefs and the governor of the holy Circle; you are indeed the Great Cat.”  – inscription in the Valley of the Kings. Talk about loving your fur baby!

Even the cats of ordinary Egyptians were treated with great respect. They were adopted into homes and often treated as well as the children in families. There are stories of people running into burning buildings to save cats, putting their own lives at risk.

As we’ve learned, cats were believed to be magical creatures who possessed divine energy. They were thought to bring good luck to those who cared for them. And once they ascended to a privileged place in Egyptian culture and lifestyle, they were frequently depicted in murals, paintings, sculptures, and monuments.

An important tomb painting presents a story from the Egyptian Book of the Dead. Apophis, who was represented as a serpent and was the divine enemy of Ra, embodied chaos. He was defeated and dismembered by the great cat Mau. The Sun rises, and light triumphs over darkness – an enduring story and a reminder of cats’ duty to man. 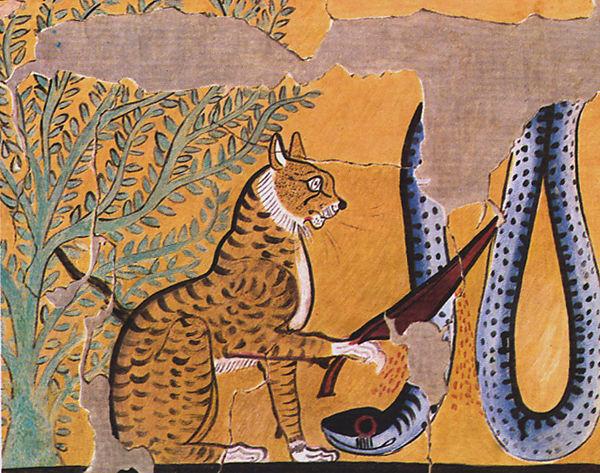 Ancient Egyptian arts also depicted cats in less fantastical but still symbolic ways. Such representations often feature the cats with their human families and focus on the dual nature of felines. For example, their strong, aggressive side could be revealed in images of them hunting birds and killing rodents, taking control of the chaos, and providing divine protection alongside their human companions. Their affectionate side is found in scenes of domesticity, sometimes playfully hiding under a bed or posing beside the family matriarch’s chair, perhaps offering divine protection or simply displaying friendship and connection. And don’t underestimate the ancient Egyptians’ emphasis on the association of cats with the role of women in their society.

Of the many festivals Egyptians enjoyed, the largest and most popular one was celebrated in Bubastis. It honored the feline goddess Bastet. Hundreds of thousands of celebrants would gather to dance, drink, and make sacrifices and offerings to the goddess. (There are even reports of Bastet worship in surprising parts of the world today.)

Ritual sacrifice of cats was not uncommon in ancient Egypt, but the unsanctioned killing of cats was a sacrilege. Perpetrators of such abominations against these creatures were subject to harsh punishment, including death.

Author Terry Pratchett once said, “In ancient times cats were worshiped as gods; they have not forgotten this.” So next time you’re cleaning out the litter box, make sure you're paying respect to some of the most important figures in all of ancient Egypt. And consider naming your next rescue cat “Bastet.”

Kellyn Doerr is a contributing writer for MagellanTV. Originally from Rhode Island, she is a graduate of the University of Vermont. Kellyn lives in New York City with friends and her cat Tiberius. She enjoys watching movies, eating out, and dominating a game of pool.