With its roots in medieval Japan, Zen meditation reached the United States in the wake of the Second World War. Gaining followers as part of the ’60s counterculture wave, American Zen became a distinct stream of Buddhist practice, broadly admired for its promise of enlightenment, though little understood.

A byword for simplicity and peaceful awareness, the term Zen has been appropriated by marketers of wellness programs and a range of personal products from soap to clothing to water filters. Social media sites offer memes for “your daily Zen” – pithy moral observations and brief truisms meant to put our multi-tasking brains at ease, if only for the half-minute spent contemplating the message.

While many regard it as a kind of feeling or attitude, few realize that Zen is a deep, multi-limbed philosophy. And an even smaller number understand the centuries-old religious practice is intimately based in Buddhist monastic rules.

With its origins in Iron Age China, and its development in medieval Japan, Zen practice did not appear in the United States until the early 20th century, and its intense growth did not start until after the Second World War. Mystical and accessible at the same time, Zen was seen as a practical way of regarding the self in the world that promised to transform both. It appealed to a Western culture increasingly aware of the failure of its political and religious institutions to stop wars and social decay. It was very exotic, and very American, at the same time.

Its practitioners insist it is impossible to say what Zen is; to put it into words is fundamentally restrictive and misleading. The word itself is a Japanese rendering of the Chinese “Chan,” usually translated as unmoving or still.

By the sixth century CE, about 1,000 years after the historical Buddha’s death, a meditation method had developed in China in which seated monks withdrew their attention from the outside world to concentrate on the in-and-out nature of their breathing to quiet the mind’s nagging, stray thoughts. Paying attention to and then putting aside needy human impulses was regarded as the most effective way to release the source of human suffering, called karma, which the Buddha had illuminated in his long ministry.

Learn about the life and teachings of Buddha in the illuminating MagellanTV series Genius of the Ancient World.

By the 10th century CE, this program of seated meditation had been carried to Japan. Zen’s evocation of stillness, the ultimate sense of emptiness at the center of existence, became an aesthetic that informed nearly every aspect of Japanese culture, from painting, to gardening, to tea ceremonies, to samurai combat culture.

Of course, this rigorous meditation program was available only to monks. Everybody else (farmers, soldiers, tradespeople, bureaucrats) were too busy fulfilling worldly obligations – their own karma – to participate. Priests mainly presided over ceremonial social occasions common to all religions: marriages, funerals, and ritual prayer.

The 19th century saw both the ascension of Japan as a growing Asian power and an increasing interest in Eastern philosophy. In the United States, it started when British translations of the Indian Vedas reached the Transcendental philosophers, among them Ralph Waldo Emerson and Henry David Thoreau. Their subsequent lectures and writings proposed a broad mystical order to the universe very different from traditional Christian hierarchies.

This interest in alternative cosmologies was behind the Parliament of the World’s Religions held in Chicago in 1893 to coincide with the city’s grand Columbian Exhibition. Attending was Zen master Soyen Shaku, abbot of two major temples, who presented, in translated remarks, a talk on karma.

The 1893 Parliament of Religions also featured a presentation by Swami Vivekananda of a series of elaborate poses for the body intended to quiet the mind. It is considered the first yoga class taught in the United States.

Perhaps the most notable aspect of Shaku’s remarks was his 23-year-old student who translated the speech into English. A gifted linguist, fluent in Chinese, English, German, and Sanskrit, Daisetsu Teitaro (D.T.) Suzuki became central to the growth of Zen in America.

Shaku sent Suzuki back to Illinois to work with Paul Carus, a writer and editor interested in the intersection of science and religion. There, Suzuki translated Chinese texts into English, and Carus’s groundbreaking account of the Buddha’s life into Japanese. After travel in Europe, and marriage to an American, Suzuki returned to Japan where he became a professor of Buddhist studies at Tokyo University.

It was there, in 1930, that Suzuki met Ruth Fuller Everett, an American already well-versed in the study of yoga and Vedic philosophy, in Japan on vacation. Suzuki introduced Everett to Zen meditation, a practice she continued on her return to the U.S. In 1938, she helped found the First Zen Institute of America in New York City, marrying the priest leading the Institute, Sokei-an Sasaki.

The widowed Ruth Sasaki returned to Japan in 1948 to live and work in Kyoto, eventually becoming a Zen priest at a small temple, an unheard of accomplishment for someone born in the West, much less a woman.

In 1955 she assembled a team of three people from the First Zen Institute to come to Kyoto for translation work and study. One of them was a 25-year-old poet from Oregon, Gary Snyder, who, after his return to the U.S. three years later, would become the inspiration for a generation of young seekers thanks to a best-selling novel by one of the hottest writers in America at that time, Jack Kerouac.

Zen Blooms From Coast to Coast

The Dharma Bums appeared one year after Kerouac’s hit novel, On the Road. Both books were drawn from the author’s life and feature thinly-veiled portraits of his friends. Bums details the parties and poetry readings in bohemian San Francisco’s blossoming “beatnik” scene in the late 1950s. Snyder’s character, central to the story, is a scholar and poet who instructs the narrator – that is, Kerouac – in Zen Buddhist practice in pursuit of enlightenment. 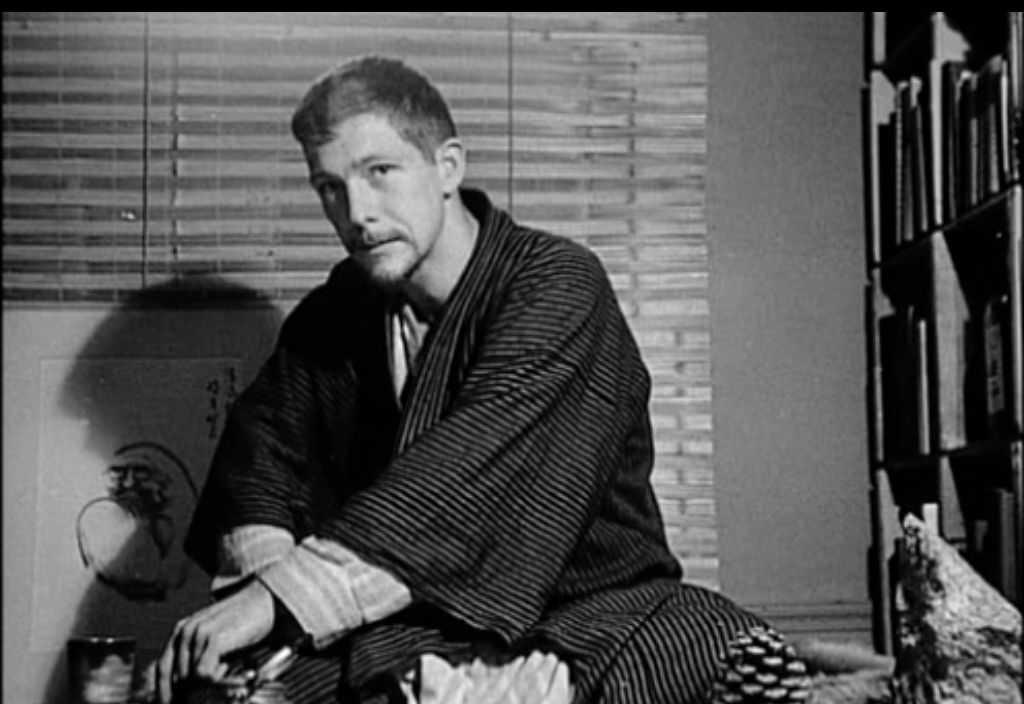 Just as sales of The Dharma Bums were growing, a 55-year-old Zen priest named Shunryu Suzuki (no relation to D. T.) was sent to San Francisco to preside at a small temple serving the city’s Japanese-American population.

The interest sparked by Kerouac’s novel, along with more rigorous accounts of Zen presented in widely-read books by D.T. Suzuki and the English theologian Alan Watts, quickly drew curious young people to the demonstrations of seated meditation, called zazen, that  “Little” Suzuki (as he called himself in relation to D.T.) gave at an Asian cultural center. It was with this growing group of mostly American-born students that Suzuki founded the San Francisco Zen Center in 1962.

Back East, interest in Zen was growing thanks to a series of lectures the 80-something D.T. Suzuki had given at Columbia University in the mid-’50s. The talks greatly influenced composer John Cage and artist Robert Rauschenberg, central members of New York’s downtown avant-garde art and performance scene. In 1965, Philip Kapleau, another American who studied Zen in Japan and had recently been ordained as a priest, published a popular book on the subject, The Three Pillars of Zen. In 1966, he founded a Zen center in Rochester, New York.

There are two main schools of Zen: Soto and Rinzai, their main differences being in the methods used to train students in mindfulness practice.

Over the next twenty years, Zen practice, as well as other forms of Buddhist observance (most notably the Tibetan tradition presided over by the Dalai Lama) entered the North American mainstream. In doing so, American Zen evolved to become a distinct branch of worldwide Buddhism.

Where Zen in Japan is mainly directed to the common ceremonial and social needs of laypeople, Zen practice in America is fundamentally monastic in form, though mainly forgoing the severe elements of physical discipline intrinsic to Zen’s medieval Japanese heritage. American Zen features more women in traditional positions of authority than found in Asia, and, in emphasizing a philosophy of compassionate observation over orthodox Buddhist theology, has taken up social justice causes from nonviolence to climate activism.

Active practitioners attend regular, sometimes daily, ceremonies for meditation at small temples called zendos. They sit on cushions, ideally without moving, usually for 40 minutes, followed by the chanting of sutras (poetic texts detailing Buddhist teachings), much ceremonial bowing, and a so-called dharma talk by a presiding priest. These homilies present ways of applying Zen mindfulness to the myriad problems arising in everyday life.

Shunryu Suzuki died of cancer in 1971 shortly after publishing a collection of his dharma talks. Zen Mind, Beginner’s Mind quickly became another central text of American Zen. In it, he gives guidance on how to sit – cross legged, and as upright as possible, with hands folded in a precise way and cradled below the navel; how to breathe – slowly and deeply; and how to handle the endless stray thoughts that swarm the mind. Just acknowledge them as thoughts, he advised, then return to the business of watching your breath. Eventually the thoughts will subside.

It is this practical, pragmatic method through which anyone, Suzuki maintained, can find enlightenment that fits so neatly into the American Experience. This democratic approach to gaining insight is also very much in accord with the nation’s core values of individuality, initiative, and self-improvement. Either as a source of feel-good memes, or as an arduous spiritual path, Zen has addressed a very traditional need in the American psyche.

There are countless Zen parables that resemble riddles, called koans, meant to be grasped more than formally understood. In all of them, actions speak louder than words, as words only confuse the way to enlightenment.

But to consider enlightenment the goal of Zen is also wrong. Its teachers say that Zen has no goals, no path, no knowledge, and no achievement, only practice. It is this radical renunciation of ultimate meaning that has allowed “Zen” to become a very flexible byword that invokes a peaceful attitude removed from the everyday world. However, to think of Zen as somehow separate from the world is also, according to its teaching, totally mistaken.

In emphasizing the need for daily practice, Suzuki was fond of a three-word phrase, a regular refrain in Zen Mind, Beginner’s Mind. Someone from a West Coast ad agency very likely got it from the book, and made it one of the most effective trade slogans, promoting sportswear, of all time.

“Just do it,” Suzuki told his students. What could be more American than that?

Transcendent experiences are moments where we feel a sense of deep connection with the world around us. They are sometimes accessed through near-death experiences (NDEs), drugs,…

Though it’s sometimes written off as New-Agey magic, sound healing is being used to treat many of humankind’s most challenging ailments. Intriguing studies have found that sound…