Buried treasure, daring sword fights, and eyepatches – it’s easy to get caught up in the Hollywood version of pirates. But those depictions obscure the authentic history of pirates, their lives, and their adventures. Some better-known stories of historically documented pirates involve the infamous Blackbeard, whose terrifying presence was enough to make adversaries surrender; the “Sea Dogs” who served England’s Queen Elizabeth I; and William Kidd, the privateer turned pirate who met an ignominious end at the hands of British authorities. But even with all the fluff and phony details left out, stories of real pirate adventures and history are fit for any big screen.

In his 1949 book, Les pirates à Madagascar, Hubert Deschamps described what would become the stereotypical image of all pirates: “Pirates were a unique race, born of the sea and a brutal dream, a free people, detached from other human societies and from the future, without children and without old people, without homes and without cemeteries, without hope but not without audacity, a people for whom atrocity was a career choice and death a certitude of the day after tomorrow.” While this simplistic description has stuck with many of us, it is not true to the history of pirates.

The portrayal of pirates in classic novels, addictive video games, and action-packed movies like Pirates of the Caribbean is misleading. They’re seen just as Deschamps described – chaotic, lawless, and unruly. But the real history of pirates, and what they did, and who they were is just as gripping as Johnny Depp’s depiction. From Blackbeard to modern-day pirates, real-life swashbucklers have left an indelible mark on maritime history. And (spoiler alert!), they never actually said, “Arg.”

The True Origins of Pirates

Technically, it doesn’t take much to be a pirate, and you don’t need to have a hook for a hand to do it. Piracy is defined simply as, “an act of robbery or criminal violence by ship or boat-borne attackers upon another ship or a coastal area, typically to steal cargo and other valuable goods.” But the stories of pirates and their origins are much more interesting than that.

Although the earliest documented instances of piracy occurred around the 14th century, the “Golden Age of Piracy” was between the 1650s and 1730s. During this period, pirates made a substantial impact on the history and culture of the Caribbean Sea and the Indian Ocean, as well as on the United Kingdom, North America, and West Africa. In these parts of the world, pirate attacks and interactions were considered a part of life and were not as unusual as you might guess based on Hollywood depictions.

The increase in piracy was attributable to factors such as the transport of valuable cargo to Europe, the emergence of pirates who had experience in various countries’ navies, and the absence of a strong naval presence in certain regions.

Many pirates in the 17th and 18th centuries began as privateers, who were basically “pirates with papers.” They were hired by governments to engage in maritime warfare, especially the capture of enemy merchant ships. Their training, experience, and mindset smoothed the transition into piracy; after all, piracy was a way to accumulate more money and loot using the skills they had already acquired. 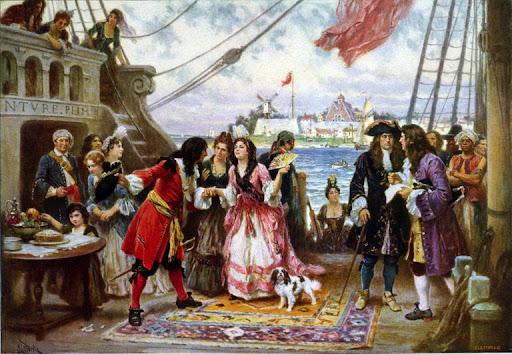 Pirates became very organized, and they developed articles of agreement called the “pirate code.” This code provided guidelines for pirate life, including discipline, division of goods, and even compensation for injured pirates.

If you were a pirate during this time and somehow your story didn’t end with being thrown overboard, your post-pirate retirement could have had a relatively happy ending. After securing your riches, you might have snuck quietly into a location in the British colonies – somewhere like Charleston or Newport or Philadelphia – and enjoy your wealth, with quite a few bedtime stories to share.

Writing in Humanities, Mark G. Hanna notes that despite their portrayal in books, plays, and movies, many pirates became normal, law-abiding civilians after their time as outlaws. They’d settle in colonial towns, buy land and livestock, marry local women, and die in their beds.

But if you were unlucky, you might have been tracked down by pirate hunters who went after those runaway English sailors who had switched sides. Then, your fate was likely to be either arrest and execution, or death in a glorious battle fit for any movie screen.

Who Were the Real Pirates of the Golden Age?

I don't know about you, but I was sort of upset to learn that Captain Jack Sparrow wasn’t based on a historical pirate. But, thankfully, there were a lot of real-life fascinating and adventurous buccaneers in the Golden Age of Piracy. 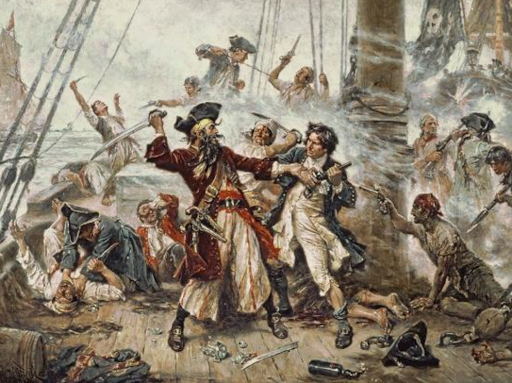 "The Capture of the Pirate, Blackbeard 1718" (Jean Leon Gerome Ferris)

Perhaps the most infamous pirate of the Golden Age was Blackbeard. (The legend is that his birth name was Edward Teach, but the records of the time were notoriously unreliable.) He became a privateer during the early 18th century’s War of Spanish Succession and, soon after, turned to piracy. He named his ship “Queen Anne’s Revenge.”  Blackbeard’s nickname derived from his thick black beard and scary appearance, and he maintained this ominous visage by keeping slow-lit matches under his hat so the smoke would always loom near him.

Blackbeard created such a terrifying reputation for himself that adversaries often surrendered before a fight even began. He ransacked countless ships and even blockaded the port of Charles Town, South Carolina, where he demanded ransom from the port’s citizens. In the end, Blackbeard was among the pirates whose luck ran out, killed in battle off Ocracoke Island in North Carolina, in 1718, by a team of British Royal Navy sailors led by Lieutenant Robert Maynard.

Another notorious group of pirates and privateers were the “Sea Dogs,” originally a military branch authorized by Queen Elizabeth I of England to do her bidding. Some notable members of this group were Sir Francis Drake, Sir John Hawkins and, one of the Queen’s favorites, Sir Walter Raleigh. They operated mainly against Spanish colonies and in the Caribbean and European waters – and, most infamously, were involved in the slave trade.  Elizabeth, due to her willingness to “work” with such pirates and favor them with her protection, was dubbed “The Pirate Queen” by the Vatican.

Nearly as scary as Blackbeard was Captain William Kidd, who began his career as a privateer commissioned by the British crown. But, after Kidd committed various unsanctioned acts such as torturing crew members and ransacking trading ships, he was declared a pirate by English officials. He scored his biggest prize when he commandeered a 400-ton Indian ship hired by Armenian merchants. The ship was loaded with valuable silks and satins as well as gold and silver coins. Kidd was eventually captured and charged with murder and piracy.  He was executed in 1701.

The common trope of pirates burying their treasure is more fantasy than fact – Captain Kidd was the only one known to have done that, apparently somewhere on Gardiners Island near Long Island. Still, people continue to hunt for treasure even today.

In the early 18th century, the need for secure commercial trade and sustainable social order in the European colonies made it much more difficult for pirates to operate successfully in the New World. Officials in the colonies, as well as in their respective homelands, developed an aversion to pirates, and the outlaws found it much more difficult to transition into a more civilized society. They were hunted down and often executed when they attempted to dock in what had formerly been safe harbors.

Once this major economic, political, and social shift to intolerance for piracy developed, there wasn’t much attraction to life on the sea anymore. As a result, by the mid-1700s the Golden Age came to its inevitable end.

But piracy itself has continued in various regions, although the pirates look and operate differently. Nowadays, pirates have adjusted to the modern world, giving up swords and cannons and replacing them with grenades and automatic weapons. Some victimize small sailing vessels touring the Caribbean; others go after much larger prey, hijacking cargo ships, and tankers and holding them for huge ransoms. 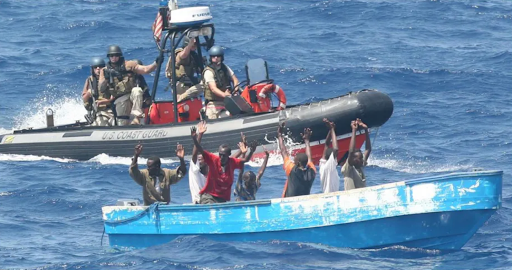 In 2020, there were 195 recorded attacks by pirates. Most of the assaults occurred in waters off Indonesia, Somalia, and Nigeria, and in the Gulf of Aden. Perhaps the most sensational incident was the seizure by Somali pirates of the Maersk Alabama, a cargo ship sailing in the Indian Ocean off the Horn of Africa. The attack was the basis for a book and the 2013 movie Captain Phillips, starring Tom Hanks.

Pirates today don’t even come close to the old movie stereotypes – burying treasure and hobbling around on peg-legs with parrots perched on their shoulders, fighting pitched sea battles with their pursuers. Still, there’s a certain pleasure in recalling those entertaining tales, and knowing that there were real pirates during the Golden Age of Piracy who still capture our imagination – swashbucklers like Blackbeard, Captain Kidd, and the Sea Dogs who knelt to Queen Elizabeth I, the “Pirate Queen.”

Kellyn Doerr is a contributing writer for MagellanTV. Originally from Rhode Island, she is a recent graduate of the University of Vermont. Kellyn recently moved to New York City with her friends and cat Tiberius. She enjoys watching movies, eating out, and dominating a game of pool.

Beyond Fiction: 2 True Stories of Modern Treasure Hunters That Will Surprise You

Treasure hunting may be seen as antiquated, but modern hunters put time, money, and passion into striking it big. Brent Brisben and Dennis Parada are two such hunters, and they…

Popularized by the Disney film, the story of Pocahontas is a crown jewel of American folklore. But was any of it true, or was the tale invented by European colonizers like John…

You might be familiar with the Salem Witch Trials or the witch hunts that overtook Europe in the Middle Ages, but witch hunts have ancient roots. They also share many root causes,…