How the Towers Fell: Science and Engineering Reveal the Facts of 9/11

Editor's Note:  This article was orginally published on September 11, 2019.

The morning of September 11, 2001, in New York City was bright and clear, offering no portent of horror and tragedy until two fully loaded passenger jets were deliberately crashed into the World Trade Center’s twin towers. Less than two hours after the first impact, both towers had collapsed in monstrous heaps of twisted metal and toxic fumes. Despite conspiratorial theories on how the towers fell, science and engineering offer the best evidence for how this disaster occurred; they also offers key lessons on how to avoid such a catastrophe in the future.

It was a sight so unprecedented, so traumatic and terrifying, you’ll never get it out of your mind. The World Trade Center’s iconic towers – at 1,368 feet, the tallest buildings in the world at that time – had been set aflame by the impact of two passenger jets deliberately flown into them. Fewer than two hours after the first impact, the South Tower, and then the North Tower, each began to collapse into itself. What followed next seemed incomprehensible: The towers appeared to disintegrate, a floor at a time, till all that was left were two smoking piles of rubble crushed and “pancaked” onto their former footprints. 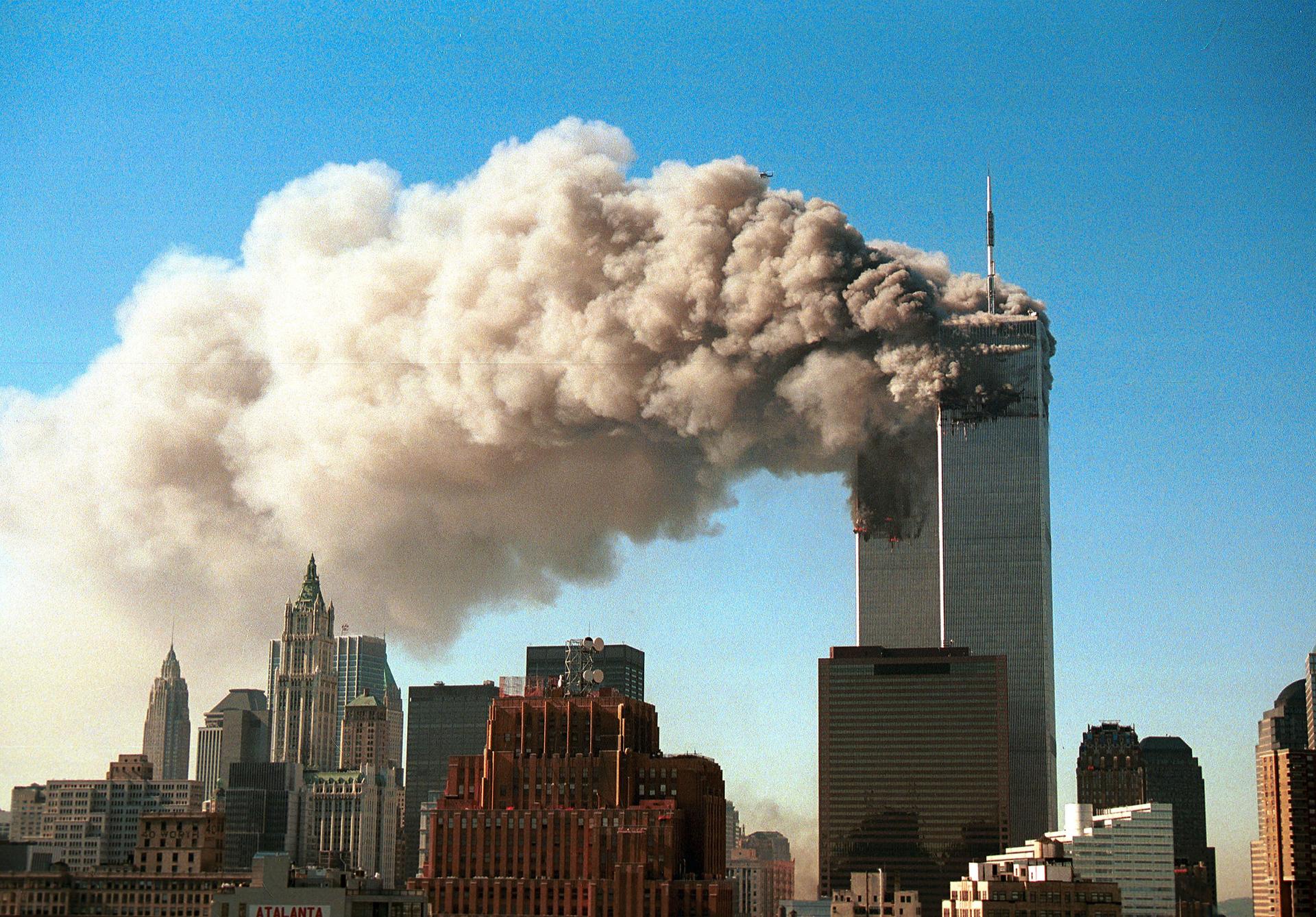 Nightmarish images of the impacts, the fires and collapses, and the tragic loss of life on 9/11 shocked us then, and continue to haunt us even today. We seek answers in the face of the unknown, and grasp for reasons to explain the great mystery of how this could occur.

Naturally, the catastrophic failure of the buildings’ superstructures raised urgent questions: Why did the towers collapse? Why did they fall so quickly? And why did the destruction appear to be so orderly? Clearly, the explosive force of two airliners – each laden with more than 9,000 gallons of jet fuel – slamming into the buildings set a chain of forces into motion. But what other answers lay hidden beneath the rubble?

Science vs. Conspiracy in the Search for Reasons

In the absence of a definitive explanation, conspiracy theories began to arise, eventually coalescing into the so-called “9-11 Truthers” movement, which asserts with righteous certainty that the destruction of World Trade Center Buildings 1 and 2 – and of the 46-story Building 7, which disintegrated into a flaming cloud of smoke several hours later – were intentionally preset “controlled demolitions.”

For more rational explanations, we can turn to scientists and engineers, who examine the same set of facts and propose comprehensive, real-world explanations for how the disaster could have occurred, rather than relying on a specious blend of conjecture and speculation. And in the search for answers we will focus not only on the twin towers but feature as well the destruction of Building 7, the “outlier” in the events of the day.

How the World Trade Center and Its Towers Were Constructed

When plans for the World Trade Center in Lower Manhattan were first announced in 1964, novel ideas about engineering and construction were the subject of much discussion. The project was so innovative, in fact, that it required government approval of various code variances.

First off, rather than the standard means of constructing a skyscraper with massive structural columns distributed throughout the building’s core, the towers were designed using a distinctive “perimeter tube” construction that moved the buildings’ support to 244 lightweight but high-strength, load-bearing steel columns distributed along the outside of each structure. 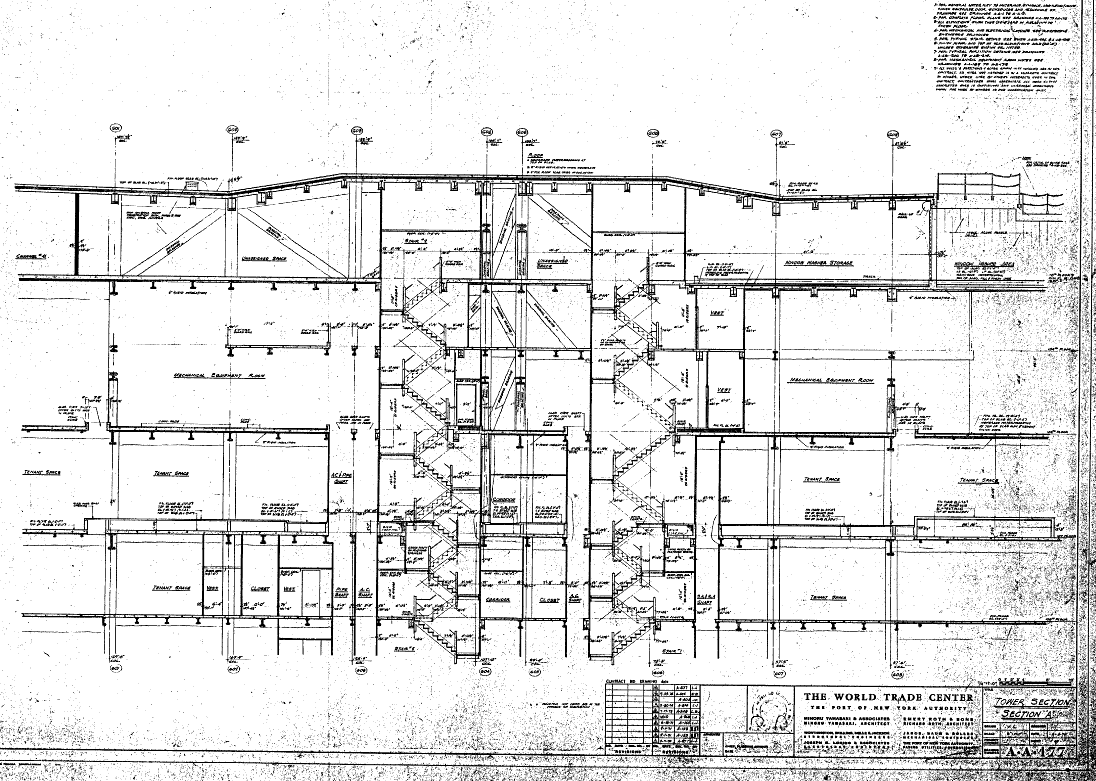 To support the interior floors of the 110-story buildings, architectural engineers utilized an “egg crate” construction style with poured-concrete floors supported without interior columns. Instead, the floors were connected to the outer supports by means of enormous trusses under each floor connecting the core to the perimeter.

Building tenants thereby had access to approximately an acre of uninterrupted space per floor without the more common interior support columns – it was a virtually unprecedented option in a skyscraper of that era. These design elements also gave the building stability and previously unknown lightness. In fact, 95 percent of the buildings’ volume was simply open space; structural materials composed only 5 percent of the buildings’ mass.

As we all know, however, these design elements were not capable of withstanding the impact of Boeing 767 aircraft, fully loaded with passengers, cargo, and highly combustible fuel. To dig further, we’ll now examine how the specific design of the towers both helped and (temporarily) delayed their own implosion.

The Two Simple Causes of the Towers’ Collapse

Ironically, it was the towers’ resilient design that caused their shocking and rapid demise. The combination of trusses securing otherwise freestanding floors and peripheral structural “tubes” proved unable to withstand the effects of the enormously powerful impacts that sheared apart structural columns, followed by the massive and exceedingly hot fires that spread above and below the impact sites. These two events – the damage caused by the planes crashing into the buildings, and the subsequent fires sparked by the explosion of jet fuel – deserve greater scrutiny.

First, consider the use of loaded passenger jets as projectiles. We witnessed what happened when the second plane crashed into the South Tower: It blasted through the outer skin of the building with virtually no visible resistance and disappeared into the center of the tower. This caused damage to all the load-bearing columns it crashed into and increased stress on all the remaining intact columns.

Beyond shifting the support for both buildings onto just a fraction of their intact columns, the impacts dislodged fireproofing that had been designed to protect the towers’ steel structure. They also dislodged fire-resistant drywall installed to protect against fires spreading within the buildings. Losing both protections exposed steel to the possibility of losing its tensile strength in a fire.

Two major studies of the events at the World Trade Center were completed in the years following 9/11. One was done by the Federal Emergency Management Agency (FEMA) and published in 2002. A separate study on the towers’ structural failure was carried out by the National Institute of Standards and Technology (NIST) and published in 2005. (In 2017, NIST published a report specifically on Building 7.)

So first, there was the structural damage; and second, there were the fireballs caused by the explosion of jet fuel, nearly 10,000 gallons of it in each tower. The rapidly spreading flames engulfed numerous floors immediately, which caused the contents of those floors to explode and be immolated in the rapidly spreading conflagration. 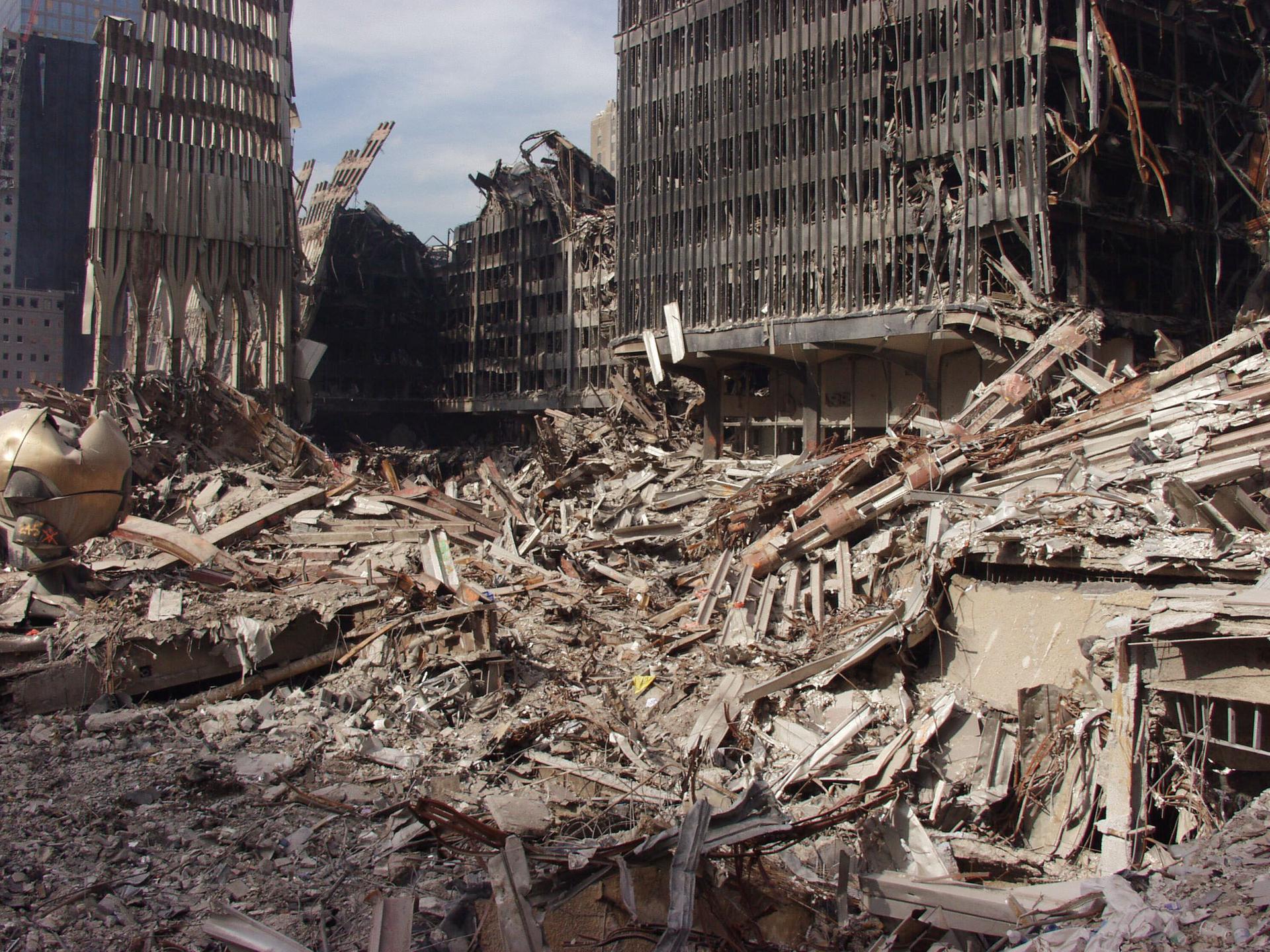 Ground Zero, Where the Towers Fell

Steel is resistant to fires, but there are limits. Since the fires are estimated to have burned at up to 2,000 degrees Fahrenheit (1,100 degrees Celsius), they exceeded the upper limits of steel’s ability to withstand extremes in heat. In a situation of this nature, steel doesn’t actually melt; it does, however, lose its tensile strength and becomes susceptible to distortion of its shape.

Once the inferno began to consume everything around it, and the steel columns began to become weak and misshapen, the trusses that supported each of the floors began to fail. The initial impact to the towers sliced numerous structural columns, causing the upper floors to begin to separate from the lower floors. With just a little time – less than an hour for the South Tower, less than two for the North Tower – the floors started pancaking, one atop another, as their supports gave way.

From then, it just looked like the towers began to collapse into themselves. And the inexorable, crushing process was visible for all to see.

Building 7, also known as WTC 7, was a 47-story structure dwarfed by the towers in the World Trade Center. It seems to have been a special case in that it fell, too, but it wasn’t directly attacked. And it collapsed hours after the iconic twin towers were already down.

The demise of WTC 7 came to be regarded as especially suspicious by Truthers. Add to that the fact that the CIA was revealed to have been a secret tenant of the building, and conspiracy-minded folks had a field day. To them, this was the “smoking gun” that revealed that the collapse was actually pre-planned and deliberately imploded. And if one building’s destruction was suspicious, then so were the fates of all the buildings.

Unfortunately for the conspiracy-mongers, NIST’s evidence-based report on Building 7 (published in 2017) showed that Building 7 fell for many of the same reasons that the towers did. First, massive amounts of flaming wreckage from the two towers were pushed out in their collapse and landed, like shrapnel, on the WTC 7, causing extreme damage by fire.

The flames spread rapidly throughout the building, engulfing its structure, weakening and causing a thermal expansion of the structural supports of the building. In the words of Popular Mechanics, however, “Even without structural damage, WTC 7 would have collapsed from fires.”

The series of attacks on 9/11 – two in New York City, one at the Pentagon, and another ending in a field in Pennsylvania – was a watershed event for the United States, and caused a refocusing of the nation’s energies and the re-prioritization of security against future terror attacks.

Among the key areas affected by these cultural and policy shifts have been building codes and standards, and the strengthening and safeguarding of very tall structures against a similar act of terrorism. The 2005 NIST report on the WTC attacks contained 30 recommendations on revising building codes and improving other aspects of construction and building security.

The NIST recommendations were then taken up by the International Code Council (ICC), which develops building safety codes and standards. The ICC accepted most of NIST’s recommendations and made numerous code changes and improvements in areas that included:

An example incorporating added layers of security is the Freedom Tower, the 1,776-foot skyscraper that was constructed on the site of the World Trade Center. Opened in November 2014, this building is clearly designed to rebuff bombers from the sky as well as on the ground. 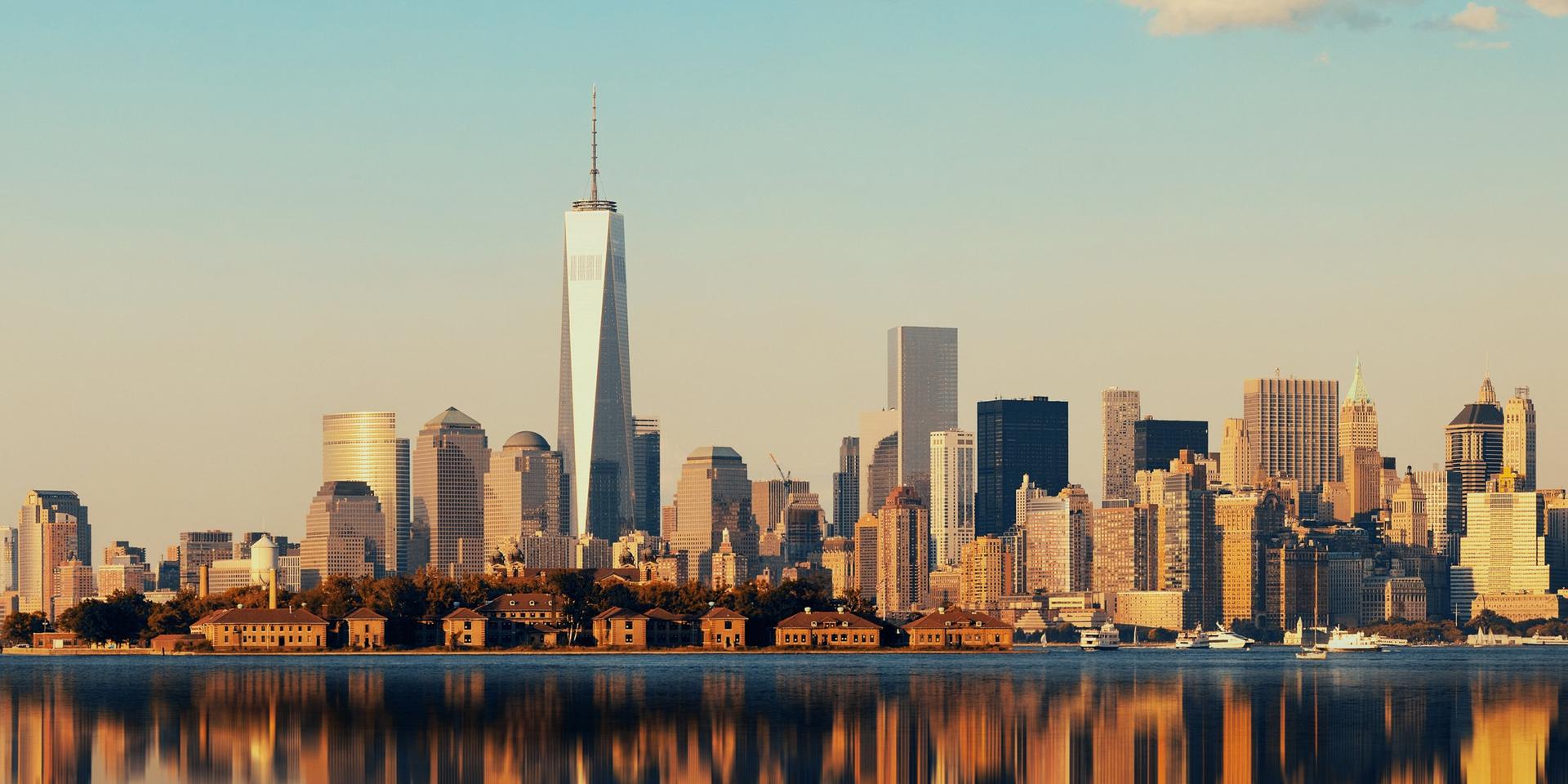 It sits on a 185-foot concrete pedestal, above which rises a solid concrete core that, unlike the perimeter tube construction of the fallen WTC towers, strengthens the center and stabilizes and protects the building’s interior. Special security elements have been added as well, including wider stairs for exiting the building and a special reserved stairway and elevator for emergency personnel.

Despite our best efforts, future attacks are possible. Our best defense (excluding, of course, diplomacy and both hard and soft power) is to employ engineering innovations and advanced building construction techniques for strategic safety. Resorting to rhetorical excess, political posturing, and paranoid fantasies offers no value at all.

“Fly-by-Wire” requires extensive use of aviation software, which must be carefully evaluated to meet FAA safety standards. Recent crashes of Boeing 737 MAX aircraft raise the…

With the collapse of the Iran Nuclear Deal, will Iran proceed with its nuclear weapons program? If so, is there a way to block it without sparking an all-out war – a conflict…

It’s a dangerous world for war correspondents, and getting riskier by the day. Reporter Lara Logan was brutally attacked in a 2011 Egypt demonstration yet survived. She is but one…