Frankenstein, Sherlock, and Alice: How Timeless Literary Characters Have Shaped Our World

Books have a special way of transporting readers and, on occasion, touching lives profoundly – in ways that eventually shape our cultures and our futures. While there are many stories that have earned recognition as influential classics, let’s look at three in particular: Mary Shelley’s Frankenstein, Sir Arthur Conan Doyle’s Sherlock Holmes novels and stories, and Lewis Carroll’s Alice’s Adventures in Wonderland.

Stories transport us to other worlds, other lives. Since the beginning of time, they have been told – evolving from word of mouth to print, and eventually, onto our screens. With so many works of literature available around the world (approximately 130 million “titles” published in modern history, as calculated by this nifty Google algorithm), what makes one work stand out from the rest?

In order to understand, we can turn to the classics to see their profound effects on both societal and individual levels. And despite these works dating back over a hundred years, the timeless characters who have often shaped our lives have remained among the most recognized, depicted, and celebrated fictional figures of all time.

Frankenstein: Monsters, Morality, and the Advent of Science Fiction

Hailed as one of the most influential horror novels of all time, and regarded as the first-ever work of science fiction literature, Mary Shelley’s iconic Frankenstein; or, The Modern Prometheus has captivated readers of all ages. Even today, after celebrating the 200th anniversary of its publication last year, the story of Frankenstein’s monster continues to haunt children and adults alike. Although it may be hard to imagine that a scary story could influence our world today, there’s no doubt that Frankenstein has done just that.

“You will rejoice to hear that no disaster has accompanied the commencement of an enterprise which you have regarded with such evil forebodings.” —Frankenstein, Mary Shelley

Mary Shelley’s chilling tale flirted with important themes and ideas of human life in a society that was beginning to see the body as mechanical. The Age of Enlightenment – which promoted science, reason, and intellect – was giving way to the Romantic period, with its emphasis on nature and emotion. The contradictory values of these two movements fueled the flame that is Frankenstein, a novel that questions the achievements of science in light of the moral and ethical consequences that arise: How far can we go? And, just because we can, does that mean we should? 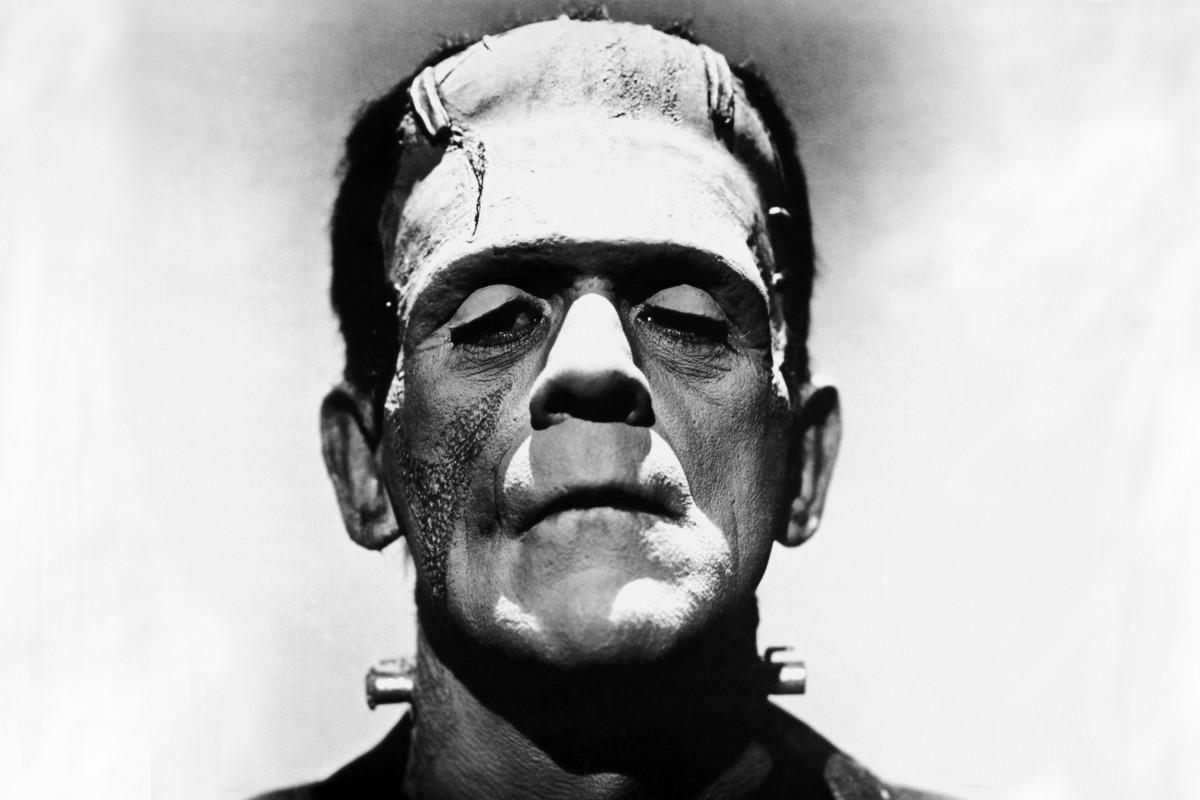 In the early 1800s, scientists were focused on electrical research and seeing how far they could push the envelope. Disturbingly, experiments were done to reanimate animals, with the goal of eventually bringing humans back to life. (And no, they didn’t actually reanimate anyone … this isn’t a zombie story, after all.)

Want to know more about this classic horror story? MagellanTV’s The Strange Life of Dr. Frankenstein offers a close look into both author and subject, while diving into the medical, sociological, and philosophical impacts Mary Shelley’s book has had.

Shelley, knowing about this terrifying trend, took the idea one step further. Why bring someone back to life, when you can create your own life? Thus, the myth of Dr. Frankenstein and his monster were born. And Shelley managed to create a story that was equal parts chilling, philosophical, and timeless.

After all, who doesn’t love a good scary story?

Our next story lets us travel to the quiet, evening streets of London – perhaps on a cold, wet night, when the chill in the air brings a guest to the door. The door, of course, leads to the apartment at 221B Baker Street. The fire roaring, our hero sits by the flames, contemplatively. It’s Sherlock Holmes.

You may not realize, but, second to the Bible, the Sherlock Holmes stories are the most widely circulated and translated books in the world. Created by Sir Arthur Conan Doyle in 1887, the quirky but brilliant detective that is Holmes is celebrated as one of the most depicted fictional characters in our history. He’s so recognized, in fact, that since his first appearance, he’s often mistaken for an actual person.

In 2012, Sherlock Holmes was awarded a world record by Guinness World Records, recognizing him as the most portrayed literary character in film and television. Holmes, at the time, had been depicted 254 times on screen.

He’s the protagonist of 56 short stories and four novels – not including later adaptations – and even Robert Downey, Jr., and Benedict Cumberbatch have had their turns portraying the savvy detective on the big screen and in a long-running BBC show, respectively. But Holmes did so much more than solve crimes in Victorian London. He helped shape popular culture, expanded the mystery genre, and popularized future forensic tools and techniques – the last including impressive contributions to our modern day criminal justice system.

The Real Sherlock Holmes, a MagellanTV documentary which highlights these achievements, credits Doyle –and his creation, Holmes – as significant influences of forensic science – a field that didn’t exist as we know it prior to the Sherlock Holmes adventures. In fact, the technology and procedures that Sir Arthur Conan Doyle described were so far ahead of their time that a number of tricks Holmes used are still practiced to this day.

Searching for evidence? Look no further than handwriting analysis. The cunning detective in Doyle’s capers practiced the art of handwriting analysis as a tool for solving crimes. The catch? Sir Arthur Conan Doyle wrote about this technique 15 years prior to it actually being used in a real case. While the method existed, its potential wasn’t realized until Holmes used it.

But that isn’t all! Doyle, a physician himself, was inspired by individuals with novel ideas in science and medicine. That’s how he discovered handwriting analysis, and that’s how he discovered another idea popularized by Sherlock’s adventures: the autopsy. In addition, through Holmes, Doyle introduced ballistics analysis, and he anticipated criminal profiling by about 100 years.

The clues have been collected, and the proof of Holmes legacy is clear. After all, it’s elementary, my dear readers.

Alice’s Adventures in Wonderland and the Pursuit of Childhood

Let’s tumble down the rabbit hole to learn about this next classic piece, conceived by a shy mathematician on July 4, 1862. On a boat, floating down the River Thames, a young girl named Alice and her two sisters were persistent in their quest: to have their friend, Charles L. Dodgson (better known by his pseudonym, Lewis Carroll), tell them a story. It was through that story that the girls – and later, the world – got a glimpse into Wonderland.

“So she was considering in her own mind (as well as she could, for the hot day
made her feel very sleepy and stupid), whether the pleasure of making a
daisy-chain would be worth the trouble of getting up and picking the daisies,
when suddenly a White Rabbit with pink eyes ran close by her.” —Alice’s
Adventures in Wonderland, Lewis Carroll

While Dodgson told the story in 1862, it wasn’t until 1865 that he assumed the moniker Lewis Carroll and published Alice’s Adventures in Wonderland, leaving his mark on the future of art and entertainment. Alice had a bit of a rebellious side, and while Carroll was known to be structured and orderly, he got a chance to play with nonconformity through his creation. With his story, Carroll included illustrations to accompany the story, which later influenced modern avant-garde literature such as House of Leaves and The  Raw Shark Texts. You could even argue that it was a precursor of today’s graphic novels. 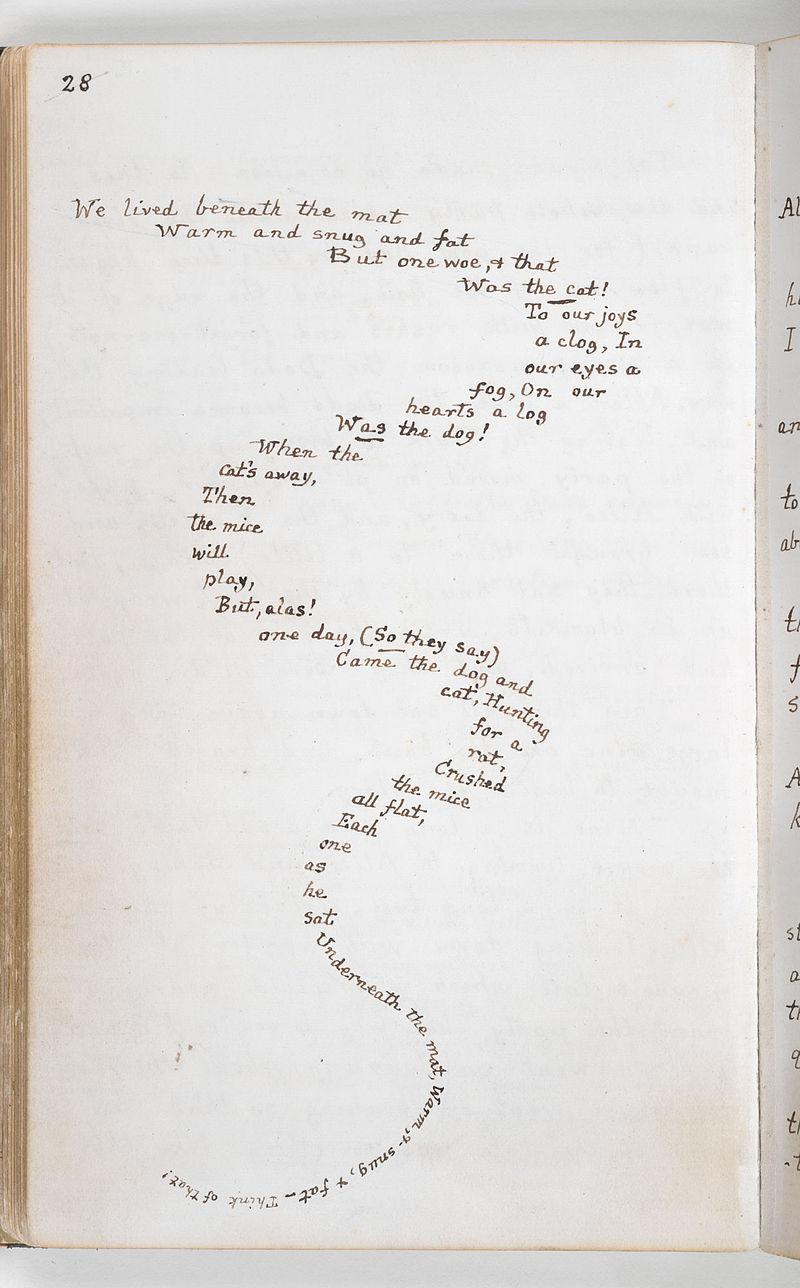 The Mouse's Tale from Lewis Carroll's Alice's Adventures in Wonderland

Alice’s Adventures inspired many new works and adaptations across the spectrum of culture and entertainment. The story has been retold countless times in film – from Disney’s classic animation to a 1999 television movie featuring Ben Kingsley, Whoopi Goldberg, and Gene Wilder, among others.

What else has the story influenced? Well, let’s go ask Alice. She’s been the subject of the Jefferson Airplane hit song, “White Rabbit,” and the inspiration behind the blockbuster movie, The Matrix. Eminent literary critic, poet William Empson wrote, “Alice has, I understand, become a patron saint of the Surrealists.” Underlining Empson’s point, Salvador Dali created the illustrations for a 1969 edition of the story, and sculptor Jose de Creeft made Alice the subject of his beloved bronze statue in New York’s Central Park. The book has even been immortalized as a ride in Disney theme parks, programmed into video games, and is the whimsically-themed setting for the New York City tea house, Alice’s Tea Cup – not to mention that we’ve gotten myriad Halloween costume ideas out of the story.

While the story of Alice’s Adventures in Wonderland is a beloved and well-known classic, the creator’s life was shrouded in mystery. Who was Lewis Carroll? And why do some consider him to have led a controversial life? The documentary, Secret World of Lewis Carroll, explores these questions and more.

But why did Lewis Carroll’s unconventional fairy tale stand out? Simply put, it was the first of its kind. Before Alice’s Adventures in Wonderland, many of the books available to children were focused on education or lessons. Carroll wrote a story that required nothing more than a vivid imagination. It appealed not only to children but also to adult readers who could be transported back into their own childhoods. And that’s why it has withstood the test of time.

Alice’s Adventures in Wonderland has delighted readers since its 1865 publication. But most readers don’t know that author Charles Dodgson, aka Lewis Carroll, was a math…

Superstitions have been common throughout history all around the world. But how much do they influence our everyday life? Let’s take a look at five of the most popular…

In our digital age, artwork and other creative content can travel rapidly from author to user. But sometimes those users exploit digital content in ways unauthorized by copyright…