Today’s Santa Claus was inspired by a monk named St. Nicholas, and transformed by Dutch immigrants, a political cartoonist, and the Coca-Cola Company.

Everyone knows the beloved image of the merry, red-nosed man in red hurtling through the sky on his reindeer-driven sleigh. But have you ever stopped to wonder exactly where Santa Claus came from? And for that matter, have you ever wondered how billions of people came to accept the idea that we must convince our children that each year, a jolly old man sails through the sky in order to bring us presents for Jesus Christ’s birthday?

As it turns out, Santa Claus as we know him today has a long and peculiar history, and he’s gone through many incarnations over the years. In the spirit of the holidays, let’s explore the ancient origins, political evolution, and capitalist remaking of Old St. Nick.

The tale of Santa Claus can be traced all the way back to 280 C.E., to Patara, a city located in modern-day Turkey. It was here that a monk named Nicholas made a name for himself by being, well, exceptionally saintly.

Not much is known for certain about Nicholas, though it is generally believed he was a bishop in Myra in the 4th century. According to legend, Nicholas gave away all of his prodigious inherited wealth and spent his life traveling the countryside and helping the poor and ill. One particularly famous story has it that St. Nicholas once saved three sisters from slavery by providing dowries to their father so the women could be properly married. Another legend says that Nicholas brought back to life three children who had been chopped up by a butcher. 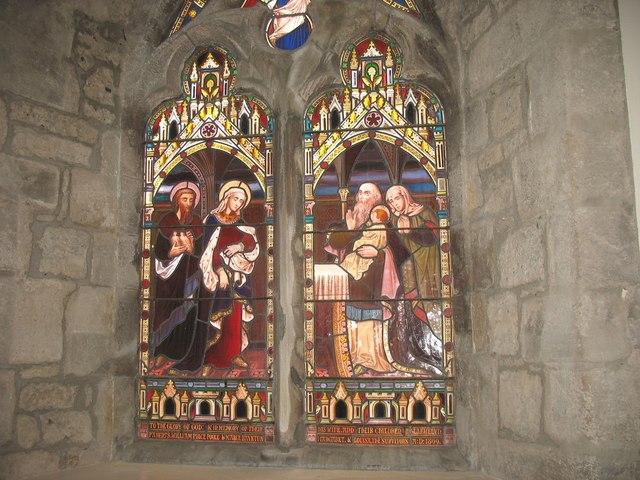 Nicholas died on December 6, a date that soon became celebrated as St. Nicholas’s Feast Day, and his legend began to spread quickly. He became widely beloved across Europe, and thousands of churches were built in his honor. Soon enough, St. Nicholas became known as the patron saint of children and sailors.

Sometime around the Middle Ages, followers began to celebrate St. Nicholas by leaving gifts for their children on the evening of December 5th so they could awaken and unwrap presents, starting Feast Day off with a proper dopamine rush.

Martin Luther, father of the Protestant Reformation, wanted his followers to avoid worshiping saints, so he told his fathers that “Christkind” – the German word for Christ Child  –  would come bearing presents on Christmas Eve. In the 1840s, “Christkind” became “Kris Kringle.”

However, after the Protestant Reformation, devotion to St. Nicholas began to wane across Europe, and soon one of the only places his legend remained popular was in Holland, where the Dutch referred to him as Sinterklaas, a Dutch version of his name. In the 17th century, Dutch immigrants carried their tales of Sinterklass across the ocean to the American colonies, and from there, St. Nicholas’s legacy took on a life of its own.

Many of the traditions we associate with Santa Claus today emerged in the Dutch settlement of New Netherland, located on the Hudson River between New Amsterdam (later known as New York City) and Oranje, which is today’s Albany. These early Dutch stories described a Santa who had a round belly and a flowing white beard, and they often mentioned Santa’s habit of leaving presents for children by the fireplace.

However, despite old St. Nick’s popularity in the Dutch colonies, the English were not so keen on venerating old Santa. Soon enough, New England’s Puritan colonies banned any fun and joyful celebrations of Christmas, fearing pagan influence and what they viewed as the holiday’s hedonistic nature. (More on that later).

However, the legend of Santa continued to spread. In 1809, Washington Irving’s satirical History of New York called St. Nicholas the patron saint of New York. It also relayed a Dutch legend that had St. Nicholas arriving on horseback bearing presents on the night before St. Nicholas’s Feast Day, and it was the first written work that mentioned Santa sliding down a chimney to deliver his gifts.

“And the sage Oloffe dreamed a dream – and, lo! the good St. Nicholas came riding over the tops of the trees, in that self-same wagon wherein he brings his yearly presents to children.” —Washington Irving, History of New York

Perhaps the most celebrated piece of writing about Santa Claus is “A Visit From St. Nicholas,” which would eventually become known as “Twas the Night Before Christmas.” Published anonymously in the Troy Sentinel on December 23, 1823, the poem immortalized Santa Claus and originated many of the features we associate with him today, including his connection to Christmas Eve. It was also responsible for the names of eight of Santa’s reindeer: Dancer, Prancer, Vixen, Comet, Cupid, Donder, and Blitzen. 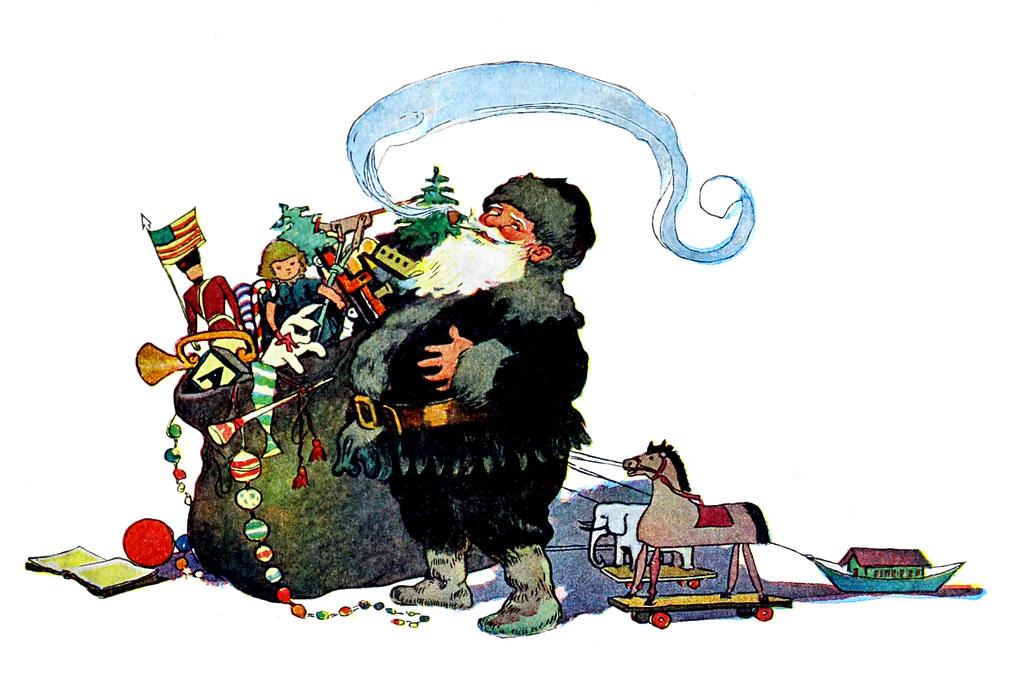 Most scholars believe the poem was written by Clement Clarke Moore, a professor and poet who was a friend of Washington Irving, though some argue that a Dutchman named Henry Livinston, Jr. composed the poem, as some of his children claimed their father had been reciting the poem to them 15 years before it was published.

While the poem’s origin remains a literary mystery, the popularity of “Twas the Night Before Christmas” was instrumental in cementing the tale of St. Nicholas. But it wasn’t until the Civil War engulfed America that Santa truly evolved into the jolly old man we know him to be today.

On January 3, 1863, the cartoonist Thomas Nast published two cartoons of Santa Claus in Harper’s Weekly. This was two years into the Civil War, and America was in shambles.

Into the fray leapt Nast, a talented political cartoonist whose work played an important role in establishing Santa’s popularity in the United States. The first cartoon Nast published features Santa Claus, clad in stars and stripes, distributing presents in a Union army camp and holding a toy that resembles Confederate President Jefferson Davis – with a rope around its neck.

The second shows Santa heading down a chimney while a woman prays and a soldier rests nearby. These drawings, inspired by “Twas the Night Before Christmas,” and by Nast’s own family, helped establish iconic aspects of Santa’s appearance, and, at the time, they cemented Santa’s association with the North. Over the course of the war, Nast would publish 33 images of Santa, many of which he used to communicate various political and social viewpoints. 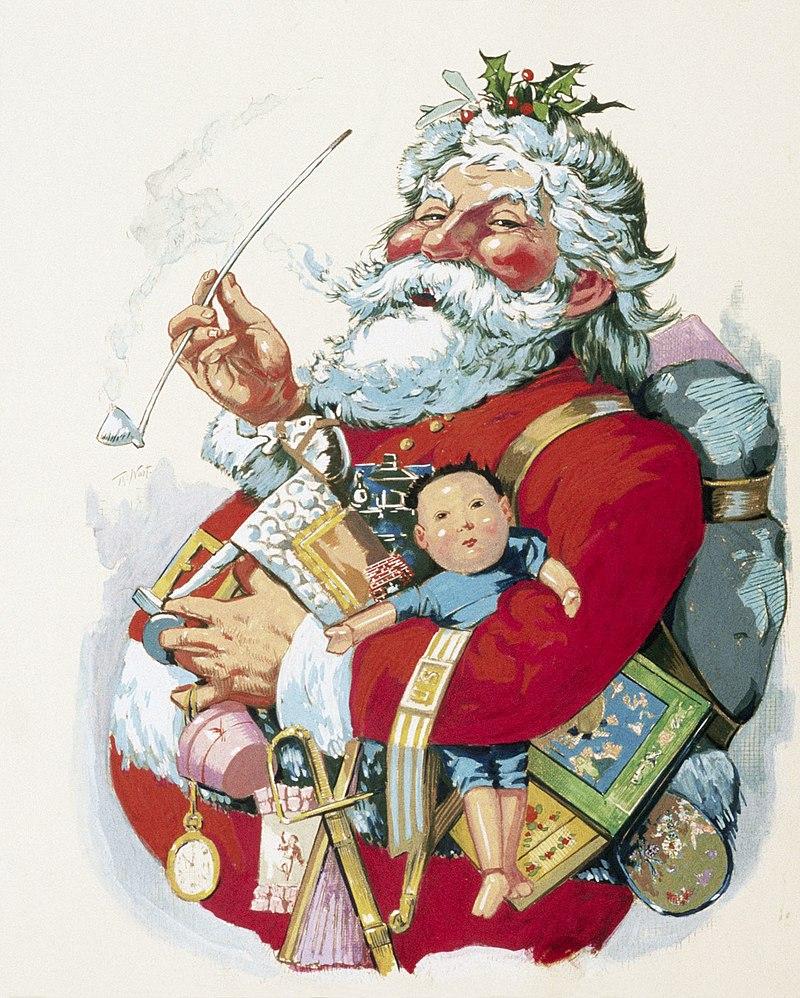 The civic-minded cartoonist was also responsible for establishing Santa’s connection to the North Pole, often featuring letters addressed to the North Pole and other depictions of the famed wintry locale in his drawings. Why did Nast choose the North Pole?

Well, Santa had been associated with reindeer for a long time. Until a few hundred years ago, the Indigienous Sami people of northern Finland would wait on winter solstice evenings for shamans to deliver them red-and-white psychedelic mushrooms, which they used as holy, healing substances. Healers would arrive on reindeer, and sometimes, when snowed in, the shamans would drop down the chimneys. While this tradition is not definitely a Santa origin story, researchers have begun to take more interest in it in recent years.

Dutch legends also established a connection between Santa and reindeer in the early 1800s, which meant Santa had to live somewhere cold. Furthermore, in the 1840s and ’50s several expeditions had attempted to make their way through the Arctic, though no one had managed to reach the North Pole at the time. So, the planet’s northernmost destination had acquired a sort of Shangri-La-esque mystique, making it the perfect place for Santa’s fantastical workshop.

In the 1920s, Santa Claus started performing a new kind of magic when Coca-Cola decided that Santa Claus would be an excellent addition to their wintertime advertising campaigns. They began to run ads that featured solemn Thomas Nast-style Santas, but, by 1930, Coca-Cola’s ads became more adventurous, featuring Santas drinking Coke in crowded department stores and other modern locations.

In 1931, an artist named Haddon Sunblom was commissioned to create images of Santa for Coca-Cola, which he did to great success. Sunblom’s iconic depictions of a rosy-cheeked Santa clad in scarlet silk played a role in cementing both Santa and Coca-Cola in the American psyche, and the artist’s illustrations have been featured everywhere from countless roadside billboards to the Louvre. 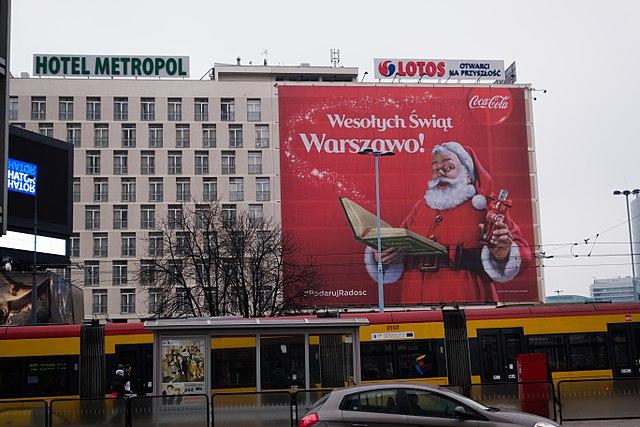 Many other business-minded folks followed Coca-Cola’s lead, correctly seeing the Santa brand as a way to make a lot of cash. In 1949, a man whose daughter kept asking him about Santa Claus had a fabulous idea. New York businessman Julian Reiss was driving by Lake Placid when he decided to build a physical version of Santa’s workshop, which would eventually become one of America’s first theme parks. He teamed up with the artist Arto Monaco, who would eventually help design Disneyland, and established a Santa-themed winter wonderland that, at one point, attracted 14,000 visitors on a single day.

“Ironically, the traits that help Santa sell products today are the same ones that tied him to Christmas in the first place. The jolly old man is genuine and giving, so when we see him, we trust him almost without question. He makes us nostalgic for childhood and helps us remember the best aspects of life, creating an easily exploitable vulnerability in his audience.”  —Gina Echevarria, Business Insider

This very Americanized – and very profitable – Santa quickly spread around the world, almost as if he actually did ride his sleigh across the globe on Christmas Eve. Not everyone was thrilled about the American Santa and his political and capitalist associations. By the late 1900s, some European countries started trying to revive the legend of the original selfless, generous St. Nicholas, as some felt that the U.S. version of Santa represented Americanization, consumer capitalism, and cultural imperialism, among other traditions exported by the States.

Over the years, numerous organizations and religious groups have protested Santa and Christmas’s emphasis on buying and receiving gifts, a trend that often tends to favor wealthy children while devastating the disadvantaged. Instead, they propose focusing on togetherness and service during the holiday season. It’s likely the historical St. Nicholas would agree.

Eden Arielle Gordon is a writer, editor, and musician based in San Francisco, California. She graduated from Barnard College with a BA in English, and her work has been published on Grunge.com, Popdust.com, Lilith Magazine, and Untapped Cities, among others.

Christmas is just around the corner, and our in-house Grump has some observations and reminiscences he wants to get off his chest – along with a few recommendations of MagellanTV…

The first known coffee drinkers were Sufi mystics in Yemen, who used coffee to stay awake during their long prayers. Since then, coffee has held a prominent position in Islam,…