Almost as old as the camera, the practice of aerial photography was mainly a tool of war for 150 years. But capturing images of the ground from a great height proved to have advantages beyond gaining knowledge of enemy armies. Beginning in the mid-20th century, aerial photos aided crop and water-use studies and added immeasurably to archeological science. Now overhead, laser-based cameras are peering through dense jungle foliage to find lost cities of vanished civilizations, and artists are using widely available ‘eyes in the sky’ to examine our world to startling effect.

Classic archaeology is a series of small painstaking discoveries. A burial here, a homesite there, a gradual uncovering that every so often renders the tomb of a king, or a forgotten village. But the 21st century has seen discoveries of ancient sites on an astounding scale: buried towns, miles of lost roadways, vast temple complexes that have been hidden for centuries in thick jungle. The modern laser and digital technology making this possible is now part of a practice of gathering images nearly as old as cameras themselves – the work of aerial photography.

Developed mainly for military use during the First World War, aerial photography remained mostly a government project through the 20th century. As the technology improved, “eyes in the sky” not only monitored the activity of enemy forces, but were used for peacetime applications in agriculture and urban planning. These overhead landscape surveys also revealed unexpected ground level features, outlines of old walls and foundations, that introduced new ways of doing archaeology.

The early aerial photographs were images of abstract beauty of the natural world, unexpectedly aesthetic works that give viewers a greater appreciation for life on our planet. The appeal of the world’s beauty as seen from overhead is at the heart of the many dazzling “Earth from above” films available at MagellanTV. It connects as well to the early days of photography, when one of the greatest photographic artists of that or any era was the first person to bring a camera high above the Earth.

That man was Gaspar-Felix Tournachon, known professionally as Nadar, the reigning portraitist of France’s cultural and political leaders when, in 1858, he took his camera up in a hot air balloon of his own design to photograph the streets of Paris. Oh, and he also invented airmail nearly 70 years before the Wright brothers lifted off at Kitty Hawk.

From the World of Art to a World at War

Nadar’s glass plate aerial photographs – none of which, alas, survive – were a sensation, and he went on to greater airborne glory. In 1863, he launched an enormous hydrogen gas balloon, inspiring his close friend, the novelist Jules Verne, to depict him as the recognizable hero of his science fiction novels, From the Earth to the Moon, and Five Weeks in a Balloon. In 1870, when the Prussian army laid siege to Paris, Nadar organized a balloon service to carry letters out of the surrounded city, the world’s first airmail service.

The notion of flying above an enemy army to send messages, and taking pictures in the process, was not lost on military strategists. Experiments continued through the 19th century with cameras connected to balloons, kites, and even pigeons (worth a try anyhow). When airplanes were added to military arsenals, aerial photography became an essential feature of war. 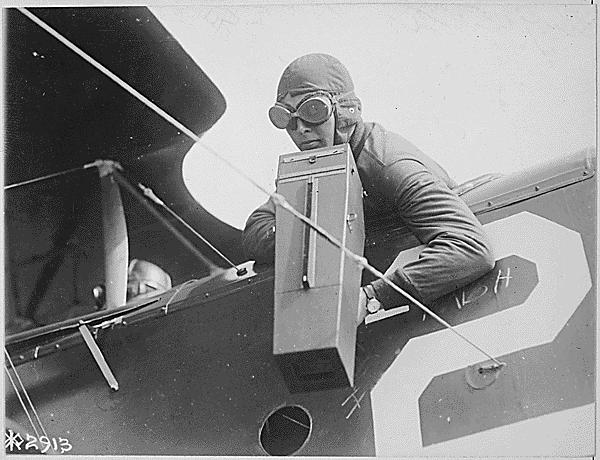 In 1915, British intelligence distributed 1,500 aerial photo maps of the German trenches at the battle of Neuve Chappelle to its infantry commanders. More than their use as bombers, or in the legendary dogfights of biplane fighter pilots, the airplane’s essential use in World War I was as a recon tool. By 1918, advances in camera technology and practice delivered new pictures of German troop placements to Allied artillery batteries twice a day. Those World War I dogfights of legend and Hollywood heroics, were mainly attempts to shoot down, or defend, aerial reconnaissance missions. In total, an estimated half-million aerial photographs were made by all combatants in the Great War.

By World War II, the practice of aerial photography was so widespread that ground camouflage and decoy strategies became necessities for military maneuvers. The site of a single reconnaissance plane overhead was an accepted element of warfare. In 1945, a lone airplane, the Enola Gay, flying above Hiroshima was assumed by the Japanese to be on a recon mission before it dropped the first atomic bomb. The picture of the mushroom cloud over the city, taken from a trailing aircraft sent to document the event, is probably the most famous aerial photograph ever made.

Over a decade later, in a world ruled by the fear of nuclear war, aerial photographs nearly caused the end of human society. In 1956, the launch of the Soviet Union’s Sputnik satellite prompted the U.S. and Britain to begin a top-secret program of spy plane surveys of Soviet military installations across the breadth of the U.S.S.R.

Lockheed’s U-2 spy plane could fly at an altitude of 70,000 feet, thought to be beyond the range of any Soviet anti-aircraft missiles. It was equipped with a camera that made images on 8x10 sheets of a very fine-grained film manufactured by the Eastman Kodak Company (a large-scale format of their 35mm Kodachrome emulsion). The camera could resolve objects on the ground down to five feet across from a perspective just a few thousand feet below the plane’s peak altitude. 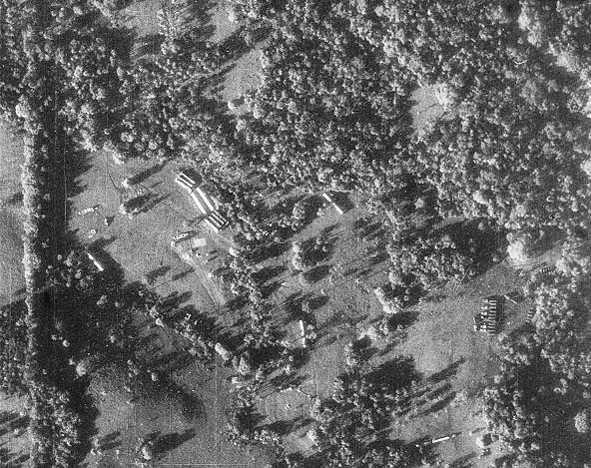 But upgraded Russian missiles brought down a U-2 plane in 1960. Its pilot was captured and imprisoned. This contributed to an already-tense international situation that nearly boiled over into global nuclear war when spy planes overflying Fidel Castro’s Cuba in October 1962 discovered Soviet missile batteries carrying nuclear warheads installed on the island.

When another U-2 was shot down over the island, killing its pilot, President John F. Kennedy resisted pressure from his military commanders to retaliate, thus avoiding escalation to a shooting war. Kennedy’s forbearance proved wise, when the Soviets’ dismantled their missile installations in exchange for the U.S. giving up nuclear-tipped missiles in Turkey.

A Tool of War Becomes Useful for Farming

A method developed in the First World War of simultaneously capturing overhead and somewhat sidelong images allowed analysts to calculate the contours of the terrain and the height of buildings. This effect had a significant peacetime application for agricultural surveys of land and water use.

Beginning in 1935, the U.S. Department of Agriculture undertook an extensive aerial survey of America’s rural land mass. Completed in under 20 years, the millions of pictures were taken above about 90 percent of the lower 48 states. The property of U.S. citizens, this vast archive can now be accessed online.

To collect coherent photographic data, aerial surveys must be conducted from specific altitudes and at a steady speed to render a consistent scale. Land surveys, for example, are generally produced to a scale of one inch equalling 10,000 ground feet. Images are collected at a steady rate on rolls of film so that 60 percent of one shot overlaps with the next, minimizing any inherent lens distortion. Aerial maps are then made by “stitching” the adjacent images together.

An Overhead Window into the Past

Though the first aerial archaeological photograph was made of Stonehenge in 1906, it wasn’t until researchers reviewing the USDA images discovered an intriguing feature. Foundations of buildings, long-abandoned and covered over, on former farm sites tend to retain moisture longer in drought conditions than the surrounding areas. Nearly invisible at ground level, the subtle differences in soil shading were clear in aerial photos, and even clearer in infrared images. Aerial archaeology was born.

Employing the same techniques for simple 3D imaging developed by the military, aerial archaeologists also make early-morning and late-afternoon flights to catch extended shadows that may reveal the foundations of long-lost buildings, villages, or battlefields.

Airborne archaeologists today benefit from another tool first developed for the military. LiDAR, or “light detection and ranging” technology, uses thousands of pulses of laser light per minute that, in a process similar to radar, reflects back to sensors to create a fully three-dimensional portrait of the scanned terrain. Bouncing off hard surfaces, LiDAR can see through all but the thickest vegetative cover. 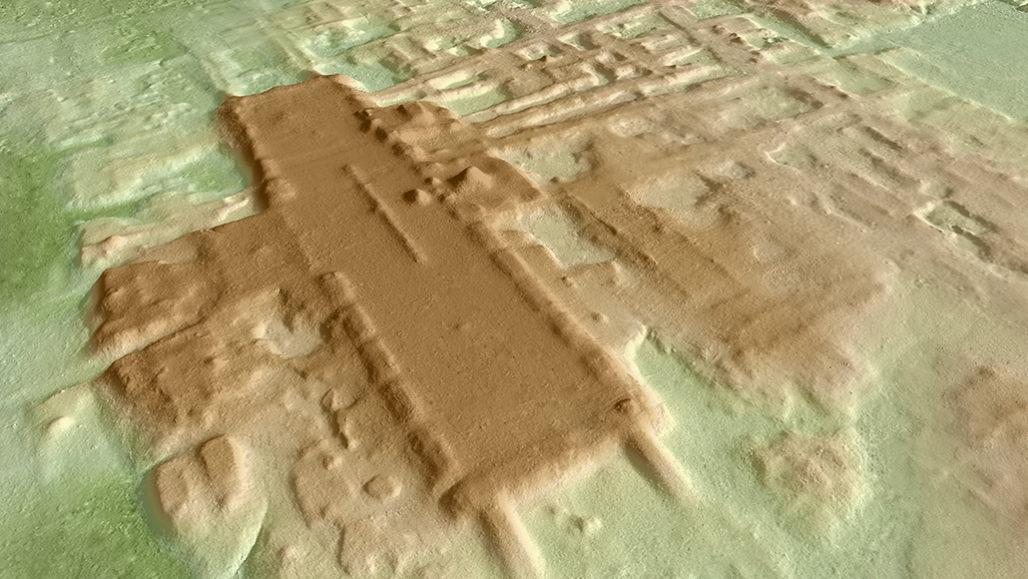 In 1971, the Apollo 15 astronauts used LiDAR to map the surface of the Moon. In 2016, archaeologists used it to reveal a vast, jungle-covered network of ancient Khmer Empire towns. In 2018, it uncovered a lost Mayan city in Guatemala. And in June 2020, a team led by University of Arizona Professor Takeshi Inomata announced the discovery of the biggest and oldest Mayan site ever found. Known as Aguada Fénix, the complex of ritual mounds, reservoirs, and roadways dating to 1000 B.C.E. was located in what’s now Tabasco, Mexico. It includes a 1,400 meter long, 400 meter wide, and 10 meter high plaza used, presumably, for enormous public spectacles.

The study of archaeology offers a finer application for aerial photography beyond the needs of the military. So much the better then that the widespread civilian use of drones, has brought aerial photography back to where it started with the great Nadar – in the hands of artists.

Radio-controlled, pilotless aircraft also have a long military history. But in 2006, the U.S. Federal Aviation Administration gave permission for the first time for amateur civilian use, under strictly limited conditions, of small drones powerful enough to carry camera equipment.

The first widely available aerial camera may have been offered by the Estes model rocket company. Debuting in 1965, and selling for $4.75, the tiny projectile featured the nose cone Camroc. It could be launched from any flat ground and was set to automatically shoot a picture as it parachuted nose first back to Earth. The tiny negatives produced round, two-inch-wide prints.

Prices of camera-ready drones range from a couple hundred to several thousand dollars. Stabilized by four horizontal propellers that can tilt to drive the vehicle forward or sit horizontally to allow hovering, these automated, GPS-guided vehicles are reorganizing the social landscape. And while they raise concerns regarding widespread unauthorized surveillance, the latest cameras peering down from above also offer a new and intimate way to experience the world, an encompassing view of our surroundings unlimited by the constraints of our bodies.

Enough photographers and videographers have embraced this new ability to see widely, to fly and to linger over aspects of the world that seem unremarkable at ground level, that a new category of art photography is now firmly established, with celebrated practitioners, and annual awards.

Art and technology today provide the opportunity to make dreamlike, low-altitude excursions over the intricate works of cities and above abstract natural forms once only partially visible from the limited vantage point of our ground-based selves. The broad application of aerial photography has given us new eyes to take long, lingering looks at the world from perspectives that we could hardly have imagined.

Jack London was the most successful American writer of the early 20th century, earning a fortune writing books that are still read today. He was also an accomplished photographer…

The history of military R&D has been both comic and tragic. And unsurprisingly, in the 21st century the world’s military budgets continue to soar.

The Development, and Grim Allure, of Crime Scene Photography

Jack the Ripper’s victims were the first to be photographed by police. Soon after, forensic methods documenting crime scenes became commonplace. Today these grim documents of…